Essential Doc Reads: Week of May 9 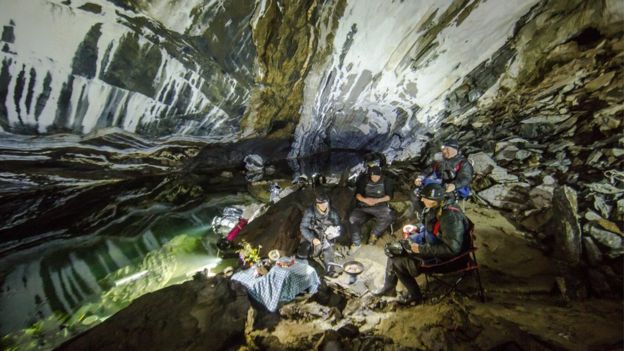 At BBC Magazine, William Kremer reports on the story behind Diving into the Unknown, a documentary about four men who risked their lives to retrieve the bodies of two divers.

In Diving into the Unknown, we do not see any of the divers collapsing into tears, or talking emotionally about lost friends. Instead, the atmosphere is one of intense single-mindedness, as the team discuss how to manoeuvre the bodies through the water, and preserve them until the police, notified after the fact, could come and collect them.

In POV Magazine, Maurie Alioff speaks to the directors of Death by a Thousand Cuts, a film about Haitians who cross into the Dominican Republic to cut wood to convert into precious fuel.

For Selkow, "The key was to take this larger crisis issue and make it personal. Going from personal to polemic is always the right trajectory for creating strong narrative documentaries. And the word we used all along was 'thriller.' How do we take the spectre of deforestation, the brewing tensions between two countries and animate that in a personal accessible narrative?"

At The Washington Post, Erin Connolly explores the pros and cons of getting an MFA.

On PayScale’s recent ranking of the highest-paying graduate degrees, not a single arts degree made it into the top 200. Still, the number of MFA students has been increasing every year since 1991, according to the National Center for Education Statistics. Plenty of D.C.-area students have found reason to love the MFA, and the salary potential isn’t necessarily one of them.

As part of a new symposium on nonfiction and "cinematic reality" at Reverse Shot, Shonni Enelow addresses "the question of acting" in Listen to Me Marlon and Birdman.

What is acting? How do we know when someone is acting? How do we know when we are acting? What marks the boundary between acting and not-acting? How do we come to understand someone who is acting to seem to be not acting, or vice versa? If we can’t figure out who is acting and who isn’t, how can we speak of acting as an art? Is acting in fact not an art—just a particular psychological and social fact that some people are more disposed to than others? Or, to put it another way, if, as Marlon Brando asserts in Listen to Me Marlon, if "we’re all actors, all good actors" because "we all lie," why are we sitting here watching a movie about the genius Marlon Brando?

At Nieman Lab, Ricardo Bilton talks to Sam Dolnick about The New York Times' commitment to building the future of VR.

"We’re also experimenting with formats. We’re looking at an experience that we jokingly call 'meditative VR.' These are single-shot, no-cuts videos of some beautiful place. You’re at a Jamaican beach at sunset, a Canadian waterfall, and you’re just there. And you look around. There’s no story, there’s nothing happening. I don’t even think it’s necessarily journalism. It’s just transportive and something that can be really powerful in VR."

"If someone were to hold a competition to create the most difficult motion picture format for capturing wildlife behavior, it is hard to imagine a more creative entry than 15/70 (IMAX). Having directed two underwater 15/70 films (one of which was produced by my wife, Michele) and been underwater DP on several others, I know what it is like to be bludgeoned by the cumbersome 15/70 format. But the inherent handicap a wildlife filmmaker assumes when working in 15/70 is one reason why I keep coming back for more. I love making underwater IMAX films because it is so hard."

END_OF_DOCUMENT_TOKEN_TO_BE_REPLACED

When Docs Go Wild: The Challenges of Nature Filmmaking