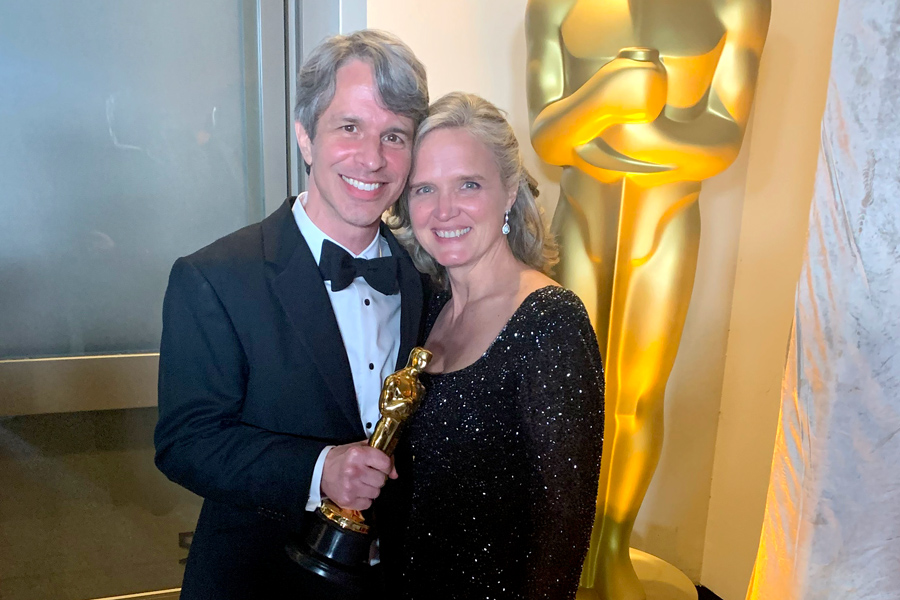 For our February Member Memo, I had the unique opportunity to interview two of our IDA Members who were both nominated for the 2020 Academy Awards. While their films and journeys were vastly different, gratitude and growth are part of both their experiences.

Marshall Curry won Best Narrative Short for his film, The Neighbors' Window. This was Marshall’s fourth nomination. He was previously nominated for A Night At The Garden, If A Tree Falls: A Story of the Earth Liberation Front, & Street Fight.

How have your experiences as a documentary filmmaker helped with crafting an Academy-Award winning Narrative short?

I think there's a lot of overlap between directing fiction and non-fiction. They're both movies after all, and they use the same grammar of cinema—a combination of wide shots and closeups and tracking shots and reverse-angles and so on, placed in an order that is hopefully engaging and surprising and emotional. I felt like spending years in the edit room, trying to turn a spaghetti of vérité footage into a film with humor, drama, and narrative arc, prepared me well to write a script. And working with actors to get performances that felt authentic was not so different from filming real people in vérité environments. In both cases, you are trying to create a comfortable space where people can relax and reveal something about themselves, or about the character who they are playing. I think documentary filmmakers probably have a particularly well-tuned sense of when people are being real and when they are mugging for the camera, and that was useful in trying to help the actors give authentic performances.

In your acceptance speech, you dedicated your award to your mom, "the best storyteller I ever knew." What is one story your mom shared that still leaves an impact on you?

My mom was a constant fountain of stories—memories from growing up or little things she noticed or overheard, or some funny thing that happened at the grocery store. My favorite thing was the way she would coax out the stories of the people around her who other people often didn't pay attention to. I visited her at her office once, and she introduced me to the woman who cleaned the building at night. My mom knew all about her—the woman had a harrowing story about fleeing Eastern Europe as a teenager during the Communist times. And then she introduced me to the security guard who had been a jazz sax player in lots of NY clubs back in the old days, and who was really hoping his little boy would make it as a drummer. I bet a thousand people passed by those two every day and couldn't have told you one thing about either of them.

With your success in short narrative filmmaking, what's next? Will you be going back to documentaries or will we see more narrative stories from you in the future?

I love nonfiction and fiction, so I'm trying to develop new projects in both. It's really gratifying to be able to control the details of fiction film—to carefully craft lines and fine-tune the set and lighting and camera work so that everything is exactly how you want it. But I also love the feeling of discovery that comes from documentaries, when someone says or does something that you never could have imagined or written. There's nothing quite like the thrill of capturing one of those moments when they happen. 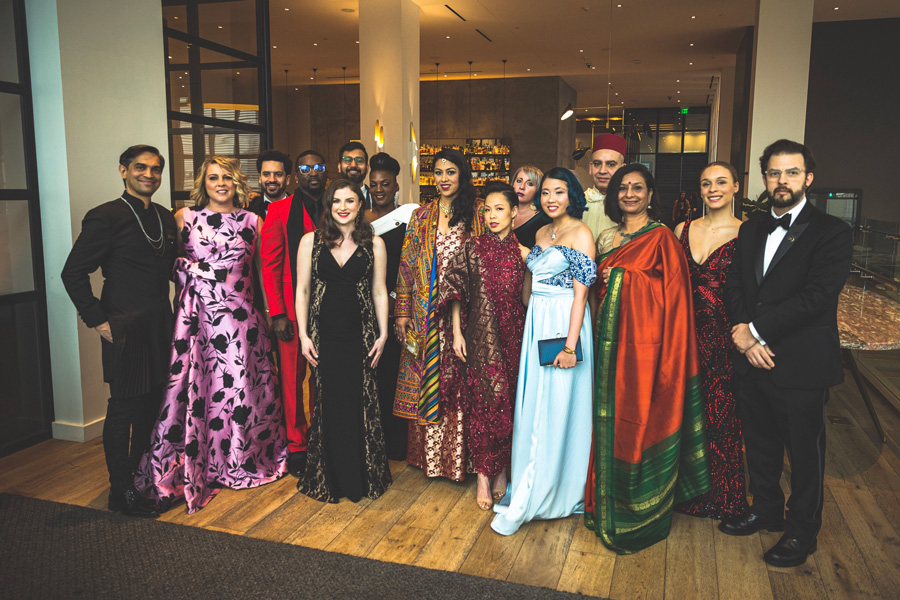 Poh Si Teng was nominated in the Best Documentary Short category as Producer of St. Louis Superman. Poh is an Emmy-nominated director and senior commissioning producer in the documentaries department at Al Jazeera English (International). She looks after documentary commissions in the Americas for Witness, the channel’s award-winning flagship character-led observational strand.

If you could relive one moment from this awards season over again, what moment would it be and why?

If I could relive one moment, it would be the moment that I saw our team dressed to represent our communities, as we prepared to depart for the Academy Awards. We were going to the Oscars as who we were and not what we were expected to be. It was symbolic, and for me, a reminder of how we were all so different, but that we chose to be together and to fight for the same thing: equity.

I think it’s fair to say that everyone in our team had, at some point in their lives, been discriminated against just for being. Some to a greater extent than others, but faced injustice nonetheless. We discussed this a lot in our year of being on the road together. It was truly inspirational to see Bruce Franks Jr., our Superman, and the directors, Smriti Mundhra and Sami Khan, talk about this very openly during Q&A’s, and reinforce the importance of making storytelling more inclusive.

With the St. Louis Superman team, the shiny golden man was always only a means to an end. It was the journey together that was truly special. We learned a lot about our own privileges and biases. We disagreed a lot, we agreed some, and we grew together. That process, that growth, is worth more than any award.

Inclusion is not just an issue for the Academy Awards, but an industry-wide issue. How do you think the documentary industry can break the barriers to promote inclusion and diversity in our community?

I have so many thoughts on this!

When I first entered the industry, I experienced first-hand the barriers to inclusion. Of how being an Asian woman and an immigrant in overwhelmingly white male spaces, meant that people were expected to engage with each other, and their stories, in a certain way.

Now, as a producer, commissioning editor and decision-maker in the industry, I think it is essential to check oneself so that we are ourselves not part of the problem. We are each blinded by our biases and privilege, which is why it is crucial to seek filmmakers with vastly different life experiences from our own. If we only work on projects that land in our inboxes, or with filmmakers in our circles, there won’t be anyone to give us a reality check, and we may very well end up perpetuating the same kind of oppressive narratives that we are here to work against. The outcome could be disastrous.

I strongly feel we learn more from being proven wrong than being right. And if we strive to work with people of different ethnicities, sexual orientations, socio-economic backgrounds, religions, and nationalities, they will call us out when we’re wrong, and we are all better for it.

Secondly, I cannot stress enough the importance of fearless and compassionate leadership. Under the guidance of Fiona Lawson-Baker, our executive producer at Al Jazeera Witness, we are constantly encouraged to take risks and backstories that might never win awards and that do not pander to convenient narratives.

Lastly, unless there’s funding for ideas and projects in the early stages, we’re never going to come close to making documentary filmmaking more inclusive. I’m very proud of the work that we do at Al Jazeera Witness because not only do we acquire films, we also commission documentaries from the pitch stage and work closely with filmmakers from the beginning right until our films are put out into the world.

I hope more strands and platforms will support filmmakers, especially emerging filmmakers, in the early stages of production. It is imperative if we truly believe in decolonizing our documentary space, and making it more inclusive for everyone.

In an interview with The Telegraph, you mentioned "The spotlight is part of the journey. What you do after the spotlight is more important.” Now that the awards have passed, what do you plan to do next with the spotlight?

We began our journey with Bruce and his story to challenge prevailing stereotypes about who gets to participate in politics and why, on the issues of mental health, and black fatherhood.

Fiona and our team at Al Jazeera Witness have always worked to cast a spotlight on individuals and narratives that inspire us and force us to question our biases and preconceptions. We must never lose sight of why we do what we do. It’s a privilege to be able to tell stories and to share them with the world.

The spotlight should humble us, as we did not get to the Academy Awards on our own merit. We did it with Bruce and the support of so many people who believed in his message. We would not have been able to do it without our communities and the generosity and backing of executive producer, Sheila Nevins, and the team at MTV Documentary Films.

END_OF_DOCUMENT_TOKEN_TO_BE_REPLACED

'A Night at the Garden': Where Past Meets Present

Meet the Oscar-nominated Filmmakers: Marshall Curry's 'If a Tree Falls: A Story of the Earth Liberation Front'