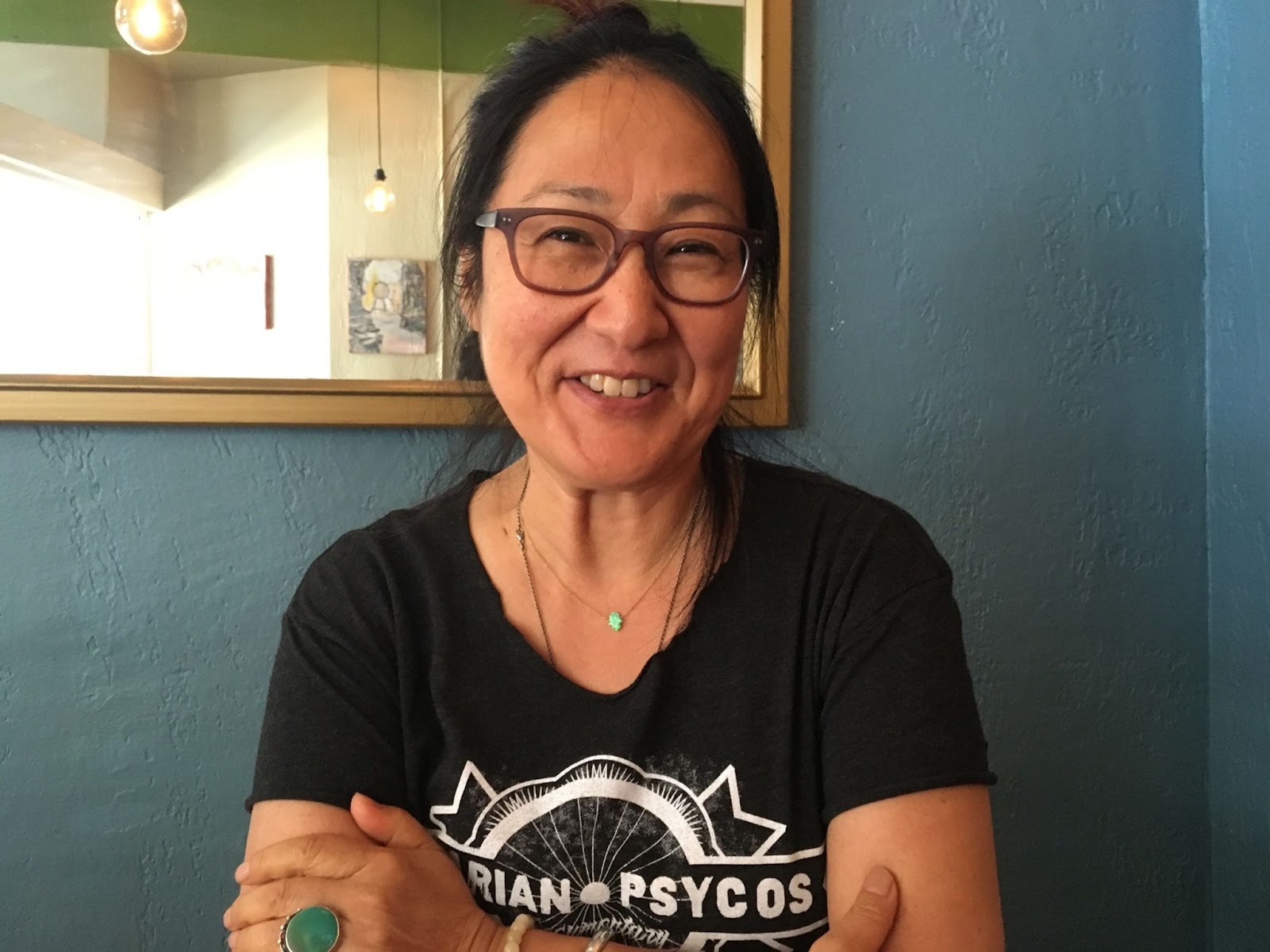 Rea Tajiri is an award-winning interdisciplinary artist and educator who creates installation, documentary and experimental films. Her work situates itself in poetic, non-traditional storytelling forms to encourage dialog and reflection around buried histories.

Tajiri is a Sansei who grew up in Rogers Park, Chicago and Van Nuys, California. She earned her BFA and MFA degree from the California Institute of the Arts where she studied post-studio art. Upon graduation, Tajiri began working in video art, two early shorts were included in the Whitney Biennials of 1989 and 1991.

One of these works, History and Memory: For Akiko & Takashige went on to receive the Distinguished Achievement Award from the International Documentary Association and a Special Jury Award from the San Francisco International Film Festival and Best Experimental Video from the Atlanta Film and Video Festival. This documentary short has screened in over 250 venues around the world. History and Memory is distributed by Women Make Movies, Video Data Bank, and EAI. You can also watch it on the Criterion Channel.

Rea Tajiri: I consider myself a visual artist – that’s where I started from. I went to art school at Cal Arts in the late 1970s, I thought I was going into painting. But entering documentary filmmaking was an organic evolution. My father was a professional photographer, so I grew up surrounded by outtakes and miscellaneous random photos from whatever he was processing in his basement darkroom– I was constantly playing with these images that had this sense of the uncanny–without context as to who was in them or where they were taken. I think this heavily influenced my work because I draw from photography and work from the archive a lot. You’re building a context around an image. The evolution from video artist to documentary filmmaker happened because I wanted to come to terms with Japanese American incarceration- what this meant for my family. Again, needing to build the context - piecing together stories and clues like the detective. This subject necessitated a documentary format, but I had to bend the rules a bit.

IDA: Tell us a little about your recent film Wisdom Gone Wild

RT: My film is centered around my mother who was diagnosed with dementia in 1999. It’s a memoir that is immersive and experiential. I had to shoot most of it on the fly as I was taking care of her. We shot in the home, in her assisted living, in a museum exhibit, in hospice and later I created a set-piece beauty shop tableau for her. I made that space for her based on her life as a beautician and her love of gardening. Then I brought her in to see how she would respond and to our surprise and delight, she began performing a song! – I utilized family archives to bring the viewer into her past– but I had a delicate balancing act to perform: I wanted to show the state of mind - elder consciousness - the free association and the ‘time traveling consciousness’ that elders engage in and I didn’t want to devolve into a kind of sentimental family narrative. So how I juxtaposed music, voice recordings and photos and observational footage was very intricate. I want to talk about the things we don’t see often in films about aging, that the past and memory are so fragile, that care can be very active if you use imagination. You need to engage play, music, art, and the sensory - follow the mind of the elder.

IDA: Congratulations on your world premiere at the Black Star film festival! What has changed for you in the process of making this film?

RT: Yes, Blackstar was the perfect place to open this film. The connection and the space of intimacy the film creates – the sharing of histories across generations, and ancestral knowledge is something that resonated with this audience and we won two awards!

What has changed for me? Mostly getting this longitudinal project off my shoulders and into the world. It was difficult to craft this film. I shared different edits with students which is something I have never done, but I wanted to show them how you have to hang in there with a project, try things out, and evolve the piece. What is important is that the film connected to people in a very deep way - many people told me they see their relationships to the elders in their lives differently. Some people who were caregivers to their parents said they’d never seen a film that shows that very intimate private space that unfolds when you take care of someone day to day - they were grateful for that. I think knowing your film has communicated something beyond what you were trying to do gives one a sense of completion. I’m hoping for new opportunities and support, I have a new body of work for documentary installation that I’m eager to begin

IDA: What piece of advice would you give to emerging filmmakers that are from historically excluded backgrounds and who are new to the documentary field?

RT: This is a good time for BIPOC / Filmmakers – there are so many more resources and labs and support communities built up than when I was starting out. I guess it’s still terrifying if you don’t feel like you fit. That was my issue when I was starting out. If you can find a mentor or a small group of people that you trust and respect your way of storytelling, that’s important. It’s important to do thorough research. It's important to understand the history of documentary filmmaking and the movements and to watch as much as you can even if it's ‘slow’. It’s good to practice filming, keep taking photos and make time to watch your footage, warts and all, that’s so instructive. Pool resources, and share work with people who you trust and can share equipment and space with. Don’t be afraid to ‘break the language’ a bit. If your stories don’t necessarily fit into some of the existing storytelling forms, see if you can innovate the form. It’s good to experiment but also to gain better clarity around why you’re doing what you’re doing. Be patient (classic older person adage!), be humble, share whenever you can, be open to change.

IDA: What are some of the changes that are happening in the field that you are excited about?

RT: Everywhere I hear from friends across the country that cultural institutions are in chaos – We are in the process of dismantling years of white supremacy white leadership - and there’s a transition into different ways of leadership and running an organization. It looks and feels different, it’s messy, people are upset, and polarized. We’re going to have to move through this to get to another more equitable, more resilient, dynamic model.

"Wisdom Gone Wild will be playing this November at festivals -- Check out the website for festival screening dates and times."