An Ethic of Curiosity: Assessing the Work of Barbara Kopple 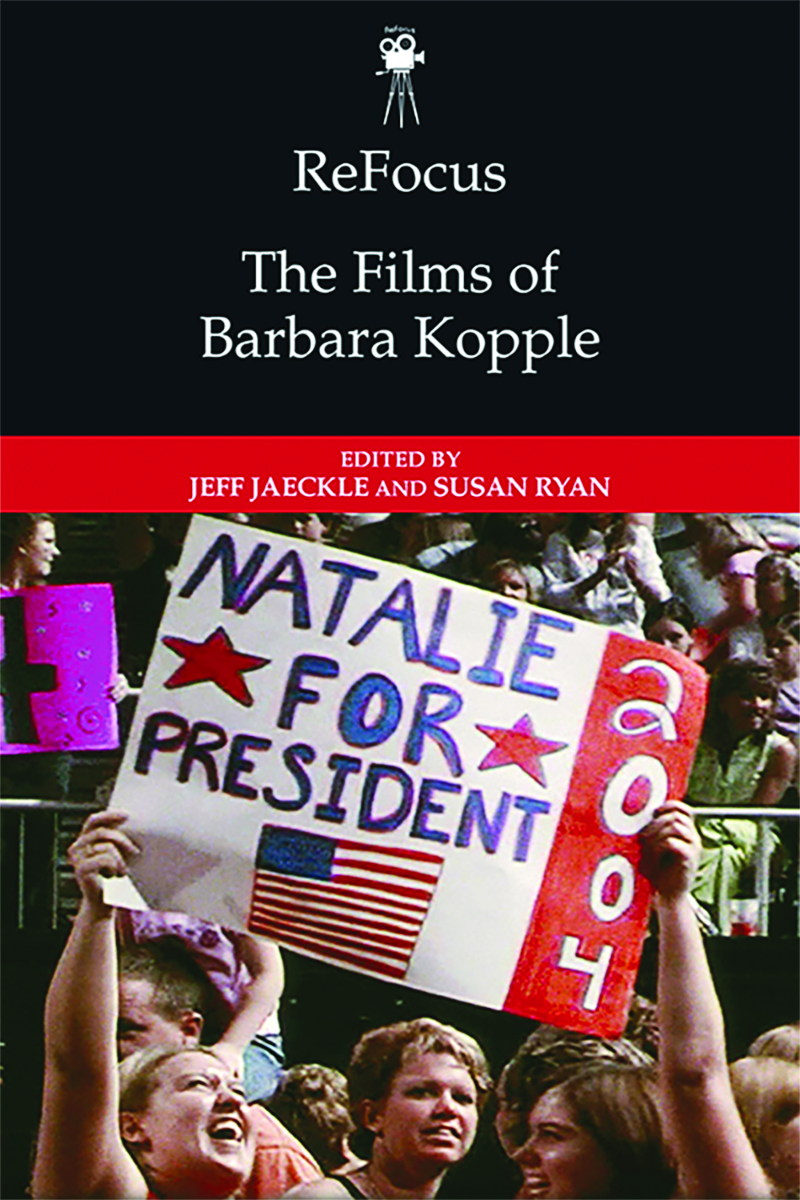 ReFocus: The American Directors Series, from Edinburgh University Press, has an admirable mission statement: “The series ignores no director who created a historical space—either in or out of the studio system—beginning from the origins of American cinema and up to the present.” This may seem like a tall order, but not ignoring does not necessarily guarantee that a lesser-known director will be given representation on the printed (or digital) page; thus far, seven directors have been included this series: Budd Boetticher, William Castle, Delmer Daves, Amy Heckerling, Barbara Kopple, Kelly Reichardt and Preston Sturges. I must confess a relative ignorance of at least three of those directors.

As most readers of Documentary are aware, Kopple is perhaps best known for Harlan County USA (1976) and American Dream (1990), both of which earned Academy Awards for Best Feature-Length Documentary. It is a welcome surprise that she has been included in this pantheon of directors—documentarians being not unfamiliar with laboring in relative anonymity—and it is cause to celebrate whenever one is delivered into the light of analysis and evaluation.

With over a dozen contributors weighing in on Kopple’s methodologies, influences and history, not to mention the history of documentary film itself, this volume has something for everyone; this may be what the publisher is driving at when it states that “ReFocus brings these American film directors to a new audience of scholars and general readers of both American and Film Studies.” Yes, the writing style of a few chapters can be somewhat convoluted and stilted, but one does not crack open a book such as this with expectations of a page-turning summer read. With more endnotes than you can shake several PhDs at, there is no doubt that this is a scholarly endeavor, and it should be a welcome addition to the bookshelves of film schools, film scholars and film aficionados alike.

The book is divided into three sections: “I. Historical Contexts and Cultural Commentary,” “II. Technique: Interviews, Music, Funding and Fiction Filmmaking” and “III. Impacts: Critical Reception and Ongoing Influences.” After whetting one’s cinematic appetite on the foreword by renowned educator/author Bill Nichols, the introduction by series co-editor Jeff Jaeckle starts the main course of the volume’s discourse. Jaeckle also contributed an entry in Chapter 6 entitled “The Peekskill Projects: Race, Riots, and Paul Robeson,” which may very well be the most critical of all the sections as it dissects Kopple’s lack of training and experience to successfully depict racism within a narrative film, and concludes that “her skills are best suited to nonfiction filmmaking, in which her direct engagement with subjects and requirement to think on her feet show her at her most nimble and astute.”

In Chapter 2, E. Ann Kaplan is afforded the opportunity to revisit and reflect on previous criticism and commentary with her 40-year retrospective of the film Harlan County USA, while in Chapter 3, Paula Rabinowitz embarks on an Odyssean exploration of the interplay between the “invasion” of the documentarian and those being documented: “This trespass is part of what gives documentaries their power; they transgress—like all encounters with strangers, they discomfort.”

Tom Zaniello follows with “The Kopple Effect: Women Directing Documentaries,” a title and terminology that points to the director’s knack for seeking out and documenting conflict as it unfolds.

Kate Hearst then examines gender agency within Kopple’s films as the text returns readers to Harlan County USA, and folds in Shut Up & Sing! (2006), which chronicles the Dixie Chicks just before, during and after an off-hand comment about the Iraq War yields some unexpected and life-changing blow-back from the patriarchy. The chapter also includes an examination of transformation with This is Everything: Gigi Gorgeous, about the transgender YouTube phenom.

The topics of Chapter 7— “Celebrity and Vulnerability”—may appeal to the more astute reader as Heather McIntosh writes about several of Kopple’s affecting and intimate celebrity documentaries, providing an opportunity to “analyze [her] technique…allowing us to consider how her style has evolved in more recent projects.” In particular, McIntosh reveals some key insights to Kopple’s “formal style—including interviews, observational moments, and participant relationships” during the making of Running from Crazy (2013). Kopple and her editors’ ability to create dramatic tension through plotting is readily apparent as she unobtrusively interviews and documents her main subject, Mariel Hemingway. The doc’s sequential parsing of information takes the viewer on a journey as patiently as a fly fisherman playing out her line, allowing the flow of the interviews to carry the audience and her subject to unexpected revelations about her history and herself.

Opening Section II, Leger Grindon combines poetry and pugilism to reveal the “Poetics of the Documentary Interview” present in Fallen Champ (1993), Kopple’s film on former boxer Mike Tyson. Also discussed within the chapter, Grindon examines the 5 P’s of the interviews within the documentary: “presence, perspective, performance, pictorial context, and polyvalence.”

Next comes “Which Side Are You On?”, Augusta Palmer’s use of the “intersectional approach to examine how music constructs race, class, and gender in three of Kopple’s films.” This is one of the more stridently critical chapters; once again, Kopple is taken to task for not exploring the issues of race more directly in her documentaries: “Though in popular discourse music is often depicted as race-, gender-, and class-blind, it is in fact deeply embedded in the realities and ideologies of race, class, and gender.”

In “Blurring Lines and Intersecting Realities in Barbara Kopple’s Fictional Work,” co-editor Susan Ryan examines how Kopple’s directing style in the world of fiction film and television has been significantly influenced by her documentary exposure. Less of an argument and more of a persuasive essay, it is a fascinating look at the interplay between narrative and documentary storytelling. Prior to reading this chapter, I was unaware of Kopple’s fictional work, specifically for NBC’s Homicide: Life on the Streets and HBO’s Oz.

Next up is Patricia Aufderheide’s chapter on the changing business ecology of the documentary, specifically its growth in popularity within the film festival circuit and the stimulation of the market by cable programmers and streaming services. She looks at Kopple’s enduring relationships with various cable channels, all of which have enabled her to move away from an earlier reliance on foundations and government grants for the funding of her projects.

Closing out Section II, Jaimie Baron’s “Exposing the Lethal Gaze in Shut Up & Sing! and Running from Crazy,” juxtaposes the “gaze” of Kopple’s camera against those of her male contemporaries. As Baron contends, Kopple reveals “the ways in which the objectifying [and dehumanizing] camera constitutes an actual and material threat to women’s bodies and lives.”

Kicking off Section III, Betsy A. McLane examines Kopple’s progression from a mentee to mentor in “Barbara Kopple: Acolyte to Leading Light.” McLane opines that “no other female has the breadth of popular, critical, and commercial success as Ms. Kopple,” and goes on to reveal “how [Kopple] found means to do this, how the arc of her career fits into a greater history of the ways documentary films get made, and how her business and promotional methods became and continue to function as role models.” McLane’s knowledge of and respect for the pioneers of cinema vérité and her insights into these mentors’ influences on Kopple make for a fascinating read, especially when she changes direction and turns her gaze to Kopple’s influences on current and future filmmakers.

Closing out the series, just before John Corner’s meta-afterword, Gregory Brown’s “Kopple and Her Critics” looks at the critical and popular response to Kopple’s films: “Kopple’s critics may not be homogenous but they tend to look beyond pure entertainment to hold her projects to a higher standard of factual accuracy or authenticity.” As a closer, Brown revisits films previously mentioned—an overlap that recurs throughout the book—but it also includes some lesser-known Kopple vehicles. As for a welcome respite of humor, its peek inside the Woody Allen bio-pic, Wild Man Blues (1997) offers one of the funnier lines (and rhymes) in the book, as Brown observes, “Many debate if Woody is carefully playing himself on camera or whether he let his guard down to show the real schlemiel.” Brown goes on to paraphrase film critic Amy Taubin: “The film’s ending succeeds in uncovering at least one aspect of Allen’s life. [Taubin] calls it ‘a psychoanalytic moment’ when viewers realize that by marrying Soon-Yi, the comedian is also marrying his mother, since the women are both uninterested in his art and [totally] self-absorbed.”

In closing, I would like to quote an observation in Bill Nichols’ foreword: “Kopple’s films are driven by an ethic of curiosity more than ideology… She enters with an open mind and generous ear to discover the story that remains latent in what she finds. [She] is exceptionally good at achieving a degree of intimacy with her subjects that stems from her humanist beliefs and allow us, in turn, to observe and judge for ourselves how her subjects comport themselves as they both go about their lives and confront a camera.”

Tom Gianakopoulos is contributing editor at Documentary. In a perpendicular universe, he also teaches English and Communication at American Career College in Los Angeles and Screenwriting at New York Film Academy in Burbank.

END_OF_DOCUMENT_TOKEN_TO_BE_REPLACED

2010 IDA Career Achievement Award--The Magic of Being There: Barbara Kopple and the Subject-Filmmaker Relationship