The Ethnographic Roots of Women in Documentary Film 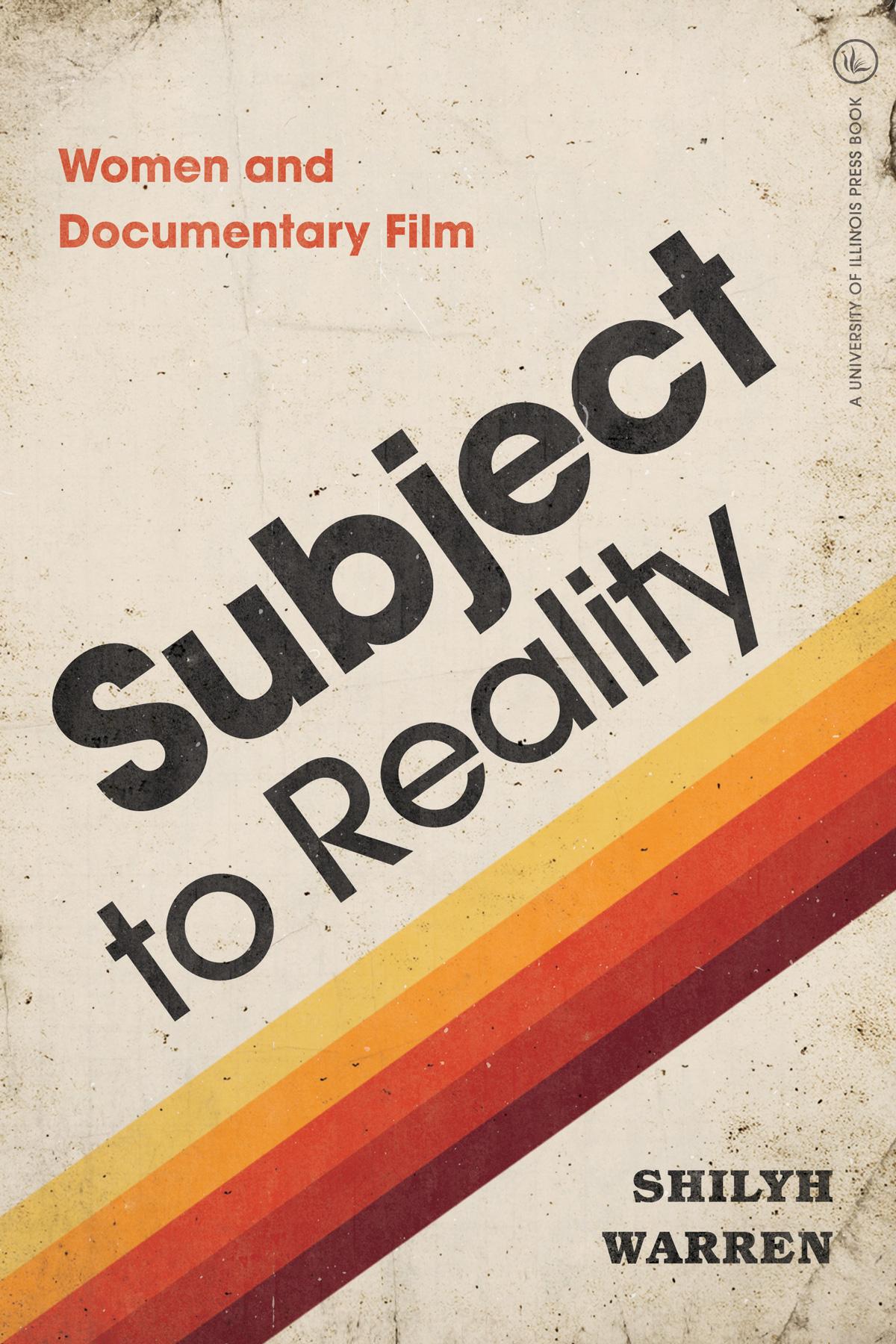 Documentary film historically has provided a more welcoming and accessible environment for women filmmakers compared to theatrical feature filmmaking. Today, when asked to name great female documentarians, most of us think immediately of Barbara Kopple, Laura Poitras, Dawn Porter and Kim Longinotto, among many others. While women working in documentary are becoming more visible worldwide, they continue to be underrepresented (30 percent of documentary directors are female, based on the last Annenberg study) and their early contributions to the genre struggle to assume their rightful place in the canon. Exploring why this is so is part of the mandate of Women and Film History International (WFHI), a nonprofit membership organization connecting a community of scholars, archivists, librarians, critics, programmers, students and makers interested in the issues surrounding cinema since its beginnings. This book, Subject to Reality by Shilyh Warren, is part of a series published under the WFHI umbrella edited by Kay Armatage, Jane M. Gaines and Christine Gledhill designed to expose the underlying dynamic that has led to the rampant historical amnesia of our time.

Warren majored in women’s studies at Dartmouth College and traveled the world as an English teacher exploring other cultures before returning to complete her master’s degree in comparative literature in 2002. It was during this stint at Dartmouth that she became interested in cinema. She went on to study critical theory and documentary film while getting her PhD at Duke University. Warren is currently an associate professor of film and aesthetic studies at the University of Texas at Dallas, where she specializes in feminist studies, documentary, women’s cinema, experimental film and ecocinemas. Her research into the forgotten or erased impact of women’s contributions to the evolution of documentary film sheds light on two critical periods: 1920 to 1940, and the explosive 1970s, when feminism and technological advances came together in surprising ways. Weaving together the threads of gender, race, class and politics, Warren draws parallels in this book between these revolutionary decades, revealing new ways to understand women’s current place in documentary film.

Anthropological and ethnographic films have consistently been treated as outliers, ghettoized in their own arena and tainted by colonialism’s imperialist legacy. By providing an alternative way of thinking about the history of documentary and shifting the focus to women’s work within the genre was eye-opening. As a reviewer, I’m wary of the often convoluted, jargon-infused rationale of feminist scholars, but Warren brings a competent, clearly argued perspective devoid of ranting to make her case. Her introduction is sprinkled with interesting, little-known specifics about contributions made by women in the field such as anthropologist Helen Powdermaker, who dubbed Hollywood the “dream factory” in her 1950 ethnographic study of the industry.

The book is divided into four chapters. Each one reveals the current and historical tendency to suppress not only the results of the labor, but also the actual physical and intellectual presence of women. Osa Johnson and Frances Flaherty are the focus of the first chapter, “Filming among Others.” Most courses about the history of documentary film begin with the work of their more famous husbands, Robert Flaherty and Martin Johnson. The irony is that these men owe their fame in large part to the contributions of their wives as producers, writers, actors, directors and promoters of their films. Surprisingly, the women were the true visionaries who looked outward and more clearly understood the potential impact of the films they and their husbands made.

Robert Flaherty’s Nanook of the North (1922) is usually the introductory film shown to students in Documentary 101. While nearly every element in the film is contrived, it is still considered, as film scholar Patricia Aufderheide contends, “one of the first great documentaries.” While acknowledging this reality, Warren states an alternative view that “more than any other film, Nanook of the North consistently appears and reappears throughout documentary studies—haunting our archives and our scholarship with its stark reminder of the colonial and fictional legacy of documentary.” This statement is profound in its simplicity and truth. Flaherty biographer Robert Christopher defines Frances’ role as the “significant architect” of his career through her writing and work as his publicist. It is she who highlighted the humanistic potential of her husband’s documentaries about foreign peoples and exotic places. This humanistic ethos underpins women’s contribution to documentary throughout the periods examined in Subject to Reality.

Osa Johnson is a complex character who dreamed of becoming a screen actress. In 1910, at the age of 16, she eloped with the young showman Martin Johnson and embarked on a romantic life of travel, cultural exploration and filmmaking, becoming public celebrities in the process. Warren points out that by 1941, Osa Johnson was one of the most famous women in America. She was involved in every aspect of the couple’s film production, from work in front of and behind the camera, to promoting their films in her many still photographs, books and magazine articles, and yet her legacy as a pioneer of documentary filmmaking has all but been erased. While Osa’s devotion to her husband was evident, always putting his needs before her own, she advocated for women’s rights internationally, stating, “Every woman should have a right to use her own name and have a personality of her own apart from her husband’s.” As Warren indicates, “The history of women in documentary does not necessarily present clearly discernable heroines.” Osa Johnson and Frances Flaherty reflect documentary’s complex history and contradictions.

In the second chapter, “Anthropological Visions Inside and Out: Zora Neale Hurston and Margaret Mead,” our two subjects are no longer known as “the wives” of the filmmakers but are professionals in their own right, anthropologists who saw the important role of the camera in a field where close observation was its core, underpinning the scientific validity of their research. Hurston is more widely canonized as an author, but Warren points out that Hurston was one of the first women to make documentary films and certainly was the first black woman ethnographer. In her short observational films about work, play and ritual, Hurston experiments with camera angles, movement, viewpoint and framing, revealing an aesthetic perspective that lifts these films out of the realm of data into a visual statement. Margaret Mead is perhaps the most widely recognized name in all of anthropology. She was and arguably still is the public American face of the field that in large part rejected her liberal positions on sex, youth and gender roles. Mead was prescient about the rise of reality TV when she observed that “watching the real life of others interpreted by the camera would fascinate people” and further, “it would offer a new way in which people can learn to look at life.” In stark contrast to Hurston, Mead believed in the value of cinematic, noninterventionist objectivity, that ethnographic films are not “an art form,” that camera movement and editing were “unnecessary variations” that degraded the utility of the scientific information embedded in the material. Here again, there are no clear heroines.

In Chapters 3 and 4—“Strangely Familiar: Autoethnography and Whiteness in Personal Documentaries” and “Native Ethnographers and Feminist Solidarity,” respectively—Warren examines the rise of the feminist perspective in the 1970s against a backdrop of race, gender and class. Joyce at 34, documentarian Joyce Chopra’s 1972 exploration of motherhood and the generational tension shifts between mothers and daughters, is a touchstone for all the themes covered in this chapter. The Woman’s Film (1971), shot in 16mm black and white and made collectively by a group of California-based white women, focuses on poor and working-class women across racial lines and is considered one of the first feminist documentaries. This film helps to shape the discussion of power and control at the heart of documentary and ethnographic filmmaking.

In re-examining the history of women in documentary, Warren has clearly shown how women’s early anthropologically inflected films resonate powerfully with the present.