http://www.documentary.org/sites/default/files/images/articles/Sum17_The..." style="width: 250px; float: right; margin: 5px;"> While "Robert enjoyed notoriety both in life and in death," it was his wife, Frances, who "crafted the intellectual infrastructure supporting documentary and independent film at the Flaherty film seminars." In this first detailed account of the history of the famed Flaherty Seminars, we discover that they never would have existed if it were not for the dedication of Frances Flaherty, whose role as collaborator, photographer and promoter–in–chief was, up until now, unacknowledged.

In The Flaherty: Decades in the Cause of Independent Cinema, authors Patricia Zimmermann and Scott MacDonald establish unequivocally Frances' importance not only in promoting the myth of her husband as the "independent explorer fearlessly engaging harsh landscapes" and the "mystical artistic genius who could conjure the essence of environments and people," but also in developing "The Flaherty Way" upon which the early seminars were based.

Since their first iteration in 1955 on the Flaherty farm in Dummerston, Vermont, the Flaherty Seminars have been held in high esteem. They achieved a mythic status among a wide range of film enthusiasts including documentary, experimental and ethnographic filmmakers, librarians, academics, historians, philosophers, poets, distributors and film critics, whether they ever actually attended "The Flaherty" or not. Given this notoriety, it is surprising that so little about what transpired at those seminars over the past six decades has been referenced in any cohesive way in the histories of American or international cinema. To address the void, Zimmermann and MacDonald have offered up this volume, admitting that it is by no means a definitive history, considering the complexity and "labyrinthine evolution" of "one of the oldest, continuously running gatherings for independent film in the world."

The opening chapter introduces us to the origins of The Flaherty Way of making films, based on an observational, immersive, Zen-like approach and the rejection of scripted, commercial production practices. In 1951, the year Robert Flaherty died, Frances and David Flaherty, Robert's brother, created The Flaherty Foundation. Their original goal was to promote Robert's films, secure all the distribution rights and advocate for a cinema independent of Hollywood.

Flaherty made his first film at the age of 40 and produced only five films in his lifetime: Nanook of the North (1922), Moana (1926), Man of Aran (1934), The Land (1941), and Louisiana Story (1948). That these titles form the bedrock of documentary film history 101 and can be found in nearly every college and university film library today speaks to the success of the work of Frances and the Foundation. Initiated four years later, the seminars were the outgrowth of the foundation.

This well-researched account is heavily footnoted yet thoroughly readable—even at times titillating. Stories abound about disagreements, heated philosophical arguments, confrontations and "the continual probing of one's conceptions, misconceptions and preconceptions that simulate the exploratory process Frances so wished to share as a way of learning to see."

The second chapter deals with the first four seminars held in rural Vermont from 1955 to 1959. It is here that Frances reigned as queen. Bill Sloan, the film librarian at the Museum of Modern Art (MoMA), stated that during these early years "the Flaherty Film Seminar was the only game in town outside of academia if you wanted to discuss cinema in a deeper, more significant way and wanted to see non-theatrical films."

As a feisty 71-year-old, Frances was determined to make the screening and discussion of Robert's films the platform upon which the programming of the 1950s seminars was built. Additional films screened in that first gathering included All My Babies (1953), by George Stoney; Corral (1954), by Michel Brault; The Pirogue Maker (1955), by Arnold Eagle; Seifritz on Protoplasm (1954), by Jack Churchill; and Toby and the Tall Corn (1953), by Richard Leacock. The filmmakers were expected to attend, and they did, participating in discussions about their work. 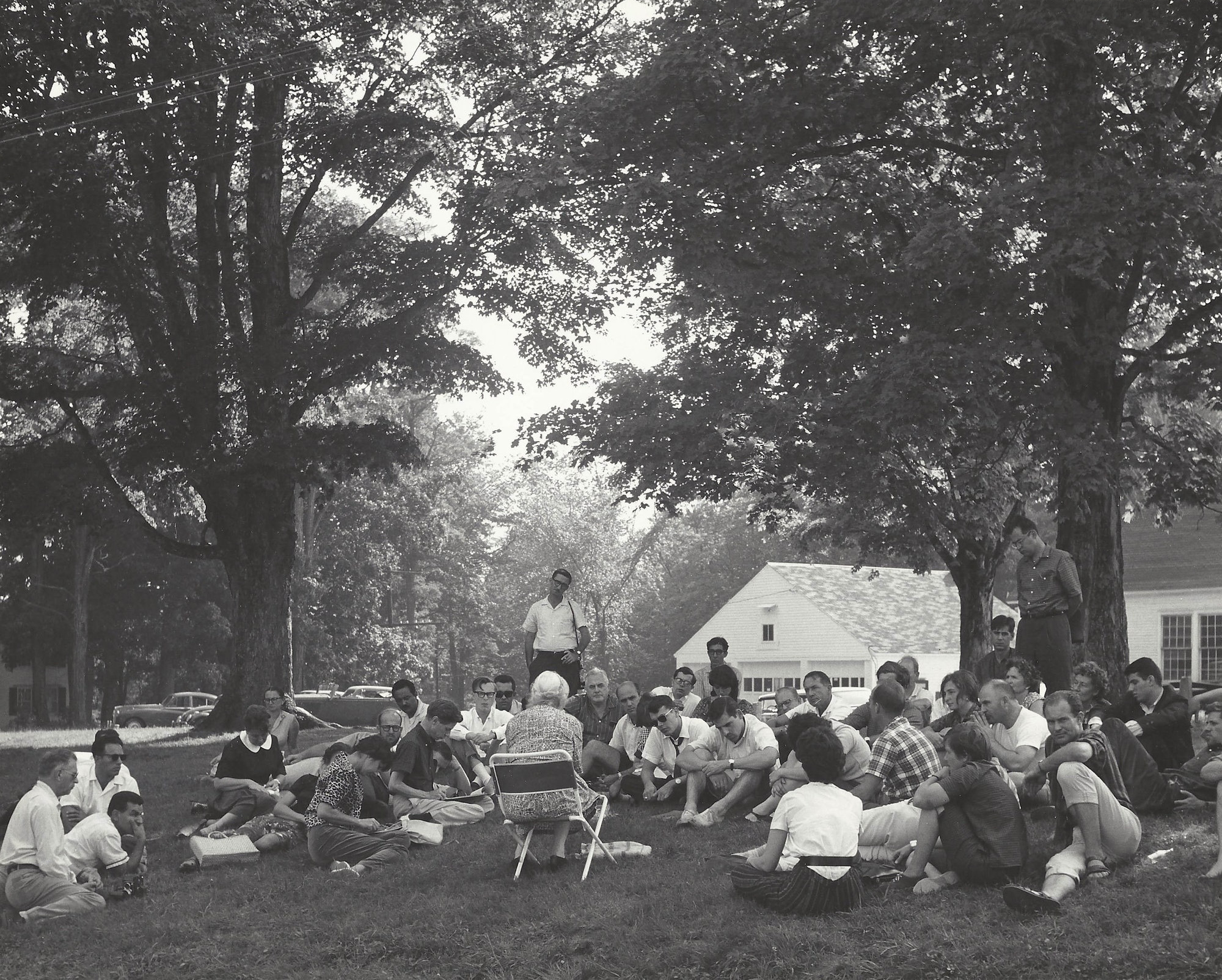 The remaining chapters are broken down by decades. "An Organization, 1960¬–1969" covers the tumultuous period when the essentially one-woman-driven, family-run project evolved into a nonprofit organization, International Film Seminars (IFS). A majority of participants, as well as all the programmers during this period, were culled from the intellectual, artistic and media hubs along the East Coast from Philadelphia, New York to Boston—including a zigzag from Vermont to Montreal to Toronto. The participants were also mostly white and male. This period has been described as the "Eric Barnouw and direct cinema meets poetic realism" years. Barnouw was a historian and one of the first film scholars to research documentary film. He served as the first president of IFS, moving their headquarters to Columbia University, where he was a professor of mass communications. Barnouw modeled the seminars after writer's retreats, with an aim of inspiring the next generation of film artists. He remained an ardent supporter of IFS for over 60 years.
Other names of influential people are peppered through this time in the development of IFS, including the contentious, self-aggrandizing Willard Van Dyke, director of the film department at MoMA, who installed his second wife, Barbara, as executive director of IFS—ostensibly forcing Frances out. Seen as an aggressive intervention to steer the program away from lyrical poeticism into a more political arena, he programmed the 1969 seminar along with D. Marie Grieco, who continued to maintain a deep admiration and friendship with Frances until her death in 1972.

The transcripts of actual discussions among filmmakers, programmers and attendees at various seminars are interspersed between chapters, and are most revealing. These sections are where the Flaherty Seminars come alive. In the discussion with Frederick Wiseman about the making of Titicut Follies (1967), he was challenged on his claim of being "the filmmaker" when it was pointed out that John Marshall was the cameraman and actually shot the film. Wiseman testily replied that it was his film because he did the sound and edited the film. Wiseman was a lawyer before he laid claim to being a filmmaker with this, his first film.

Film theorist Jay Ruby and visual anthropologist Sol Worth were active participants in the discussion of David Holzman's Diary (1967) at the 1968 seminar, along with the filmmakers Jim McBride and L.M. Kit Carson. Issues regarding appropriate audiences and who, outside of their select circle, would even be interested in such a film were discussed at length.

Not surprisingly, politics dominated the decade of seminars from 1970-1980. During this time, a preponderance of direct cinema advocates showed their work: Peter Adair, Ralph Arlyck, Les Blank, Joan Churchill, Maxi Cohen, Robert Drew, Elliot Erwitt, Craig Gilbert, Chuck Hudina, Allan King, Jeff Kreines, Danny Lyon, Albert and David Maysles, Tom Palazzolo, DA Pennebaker, Frederick Wiseman and Ira Wohl. It was also a time when more African Americans, regional filmmakers and women attended the seminars. The discussion in 1977 of Barbara Kopple's Harlan County USA (1976) opened with the question, "Were you ever in fear for your lives?" The conversation went on to reveal the depth of a filmmaker's engagement, sometimes confronting life or death choices to explore their subject matter.

In the fifth chapter, "Shock of the New, 1981–1989," The Flaherty entered its fourth decade seeing an explosion of a diverse media exhibition ecosystem that continues to expand today. Now, it is rare to find a city in America without a film festival. In the chapter titled "Crises, 1990-1999," the challenges were financial, cultural and technological, both within and outside the IFS. Digital media was on the horizon, and the push for multicultural programming prompted debate. The final chapter brings us from the year 2000 to 2015. It is a period when the IFS (still mainly known as "The Flaherty") has come full circle. A silhouetted image of Nanook from Flaherty's Nanook of the North has become the logo of the organization, confirming the significance of the debate engendered by this iconic film.

So, to all the participants who have attended The Flaherty and to anyone considering attending in the future, I strongly suggest you buy this book. You will be impressed by the history and inspired by possibilities as yet unknown in the world of independent film, as seen through the lens of The Flaherty Way.

END_OF_DOCUMENT_TOKEN_TO_BE_REPLACED

Back Door to Film School: A Complete Video Production Course Between the Covers of a Book