LA Stories: A History of the Los Angeles Documentary Community 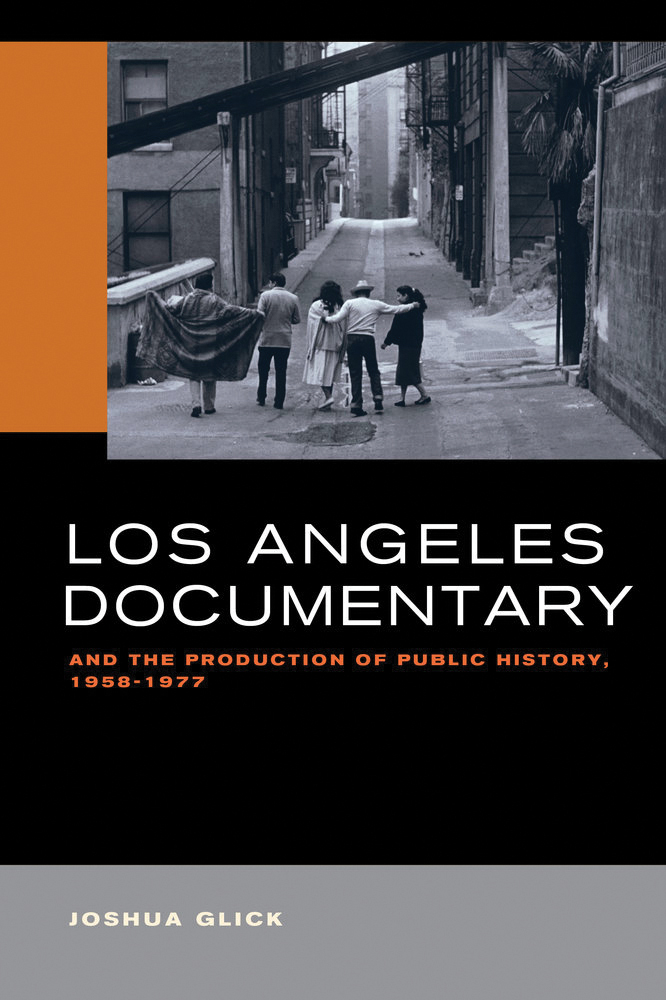 Joshua Glick's meticulously researched book, Los Angeles Documentary and the Production of Public History, 1958-1977, melds, as its title states, a practical approach to documentary studies with the less well-defined field of public history. The website for the National Council on Public History explains, "The public history 'movement' emerged in the United States and Canada in the 1970s, gaining visibility and influence through the establishment of public and applied history programs at universities" and "…retains characteristics of a movement through the on-going commitments of many current practitioners to ideals of social justice, political activism, and community engagement." Pairing documentary film with social commitment is natural, and indeed, both are usually included in most nonfiction media scholarship. Glick takes this affinity deeper than previous writers by focusing on a very specific time and place and on some of the documentarians who helped define it. He also makes it sharper by digging out original records and reports.

Broadly, Glick compares the work of David Wolper and the heyday of Wolper Productions with that of several independent documentarians working in LA during the same period: Charles Burnett (Killer of Sheep), Robert Nakamura (Manzanar), Jesus Trevino (Yo Soy Chicano), Lynne Littman (Number Our Days) and others. The independents were usually associated with cultural institutions such as UCLA (the LA Rebellion film movement), USC (visual anthropology) or public television station KCET (then doing hard-hitting local investigative reporting), and Glick includes the roles of these in his analysis. Specifically, Glick relates Los Angeles locations and institutions—business, educational, economic and political—to the documentaries made during the 20 years covered in his book to elucidate various cultural and activist mindsets. The framework used for this comparison is to contrast how films produced by David L. Wolper's companies and the films of independents defined very different aspects of Los Angeles and its widely varied communities, and how these related more generally to the greater zeitgeist of the United States during the Kennedy's New Frontier and Johnson's Great Society eras. This may sound daunting, and Glick has taken on a complex subject, but his writing style is accessible, and although best read as a whole, the book is also an excellent reference tool for those interested in a specific person or film.

Readers of Documentary would do well to pay special attention to Los Angeles Documentary, since the International Documentary Association itself rose directly from the people who worked at Wolper (as they referred to the company and the man, no matter what its official name). IDA was founded in 1982 by Linda Buzzell, then working as a researcher at Wolper. Although outside of Glick’s timeframe, it is interesting that the 70-plus people who showed up for the first meeting felt a need for some type of communal support. By that time, David Wolper was establishment, not the TV renegade of the period covered by Glick. In 1976 Wolper sold his company to Warner Communications (which, under visionary CEO Steve Ross, acquired Atari in the same year), where it remains with his son Mark. Most of those who worked in any LA-based nonfiction role in the 1960s and early '70s were not considered by Hollywood to be part of Hollywood, nor were they given the cultural respect accorded to New York-based documentarians. Learning about the personalities, productions and structure of Wolper and the independents’ activities reveals much about the ideals and goals that powered IDA during its first 15 years. Some of the individuals central to IDA's existence and survival are represented here, including producers/directors/writers Irwin Rosten and Marshall Flaum, cinematographer Villis Lapenieks, and of course, the three men Glick calls the Wolper "Brain Trust"—Jack Haley Jr., Alan Landsburg and, most prominently, former IDA Board President Mel Stuart.

Stuart takes center stage here primarily because he directed Wattstax (1973), which is the centerpiece of Glick's argument about place, people and nonfiction. Wattstax is extremely important: as a Wolper production, as a concert documentary, and as a highly innovative film that remains relevant and surprising today. Glick, in a chapter brilliantly titled "Wattstax and the Transmedia Soul Economy," does right by it, detailing the origins of the film; the business relationship between the Stax record/film company and Hollywood; the cultural context of staging a show meant to commemorate the 1965 Watts uprising; the physical coordination and artistic challenges of making the picture; and perhaps most importantly, the convergence among Memphis-based Stax, black Angelenos and white Wolper Productions. Glick notes that the crew was almost entirely black, except Mexican-American cinematographer John Alonzo, who got his start with Wolper in 1964, and Stuart, a New York-born Jewish hipster trained in classical music and possessed of an encyclopedic knowledge of Shakespeare. The intersection of these forces— a young Richard Pryor riffing in a black neighborhood nightclub, interviews with people hanging out in the Watts community, a dashiki-wearing Jesse Jackson, a chain-encrusted Isaac Hayes, and the gospel message of the Staples Singers—resulted in one of the most energetic documentaries ever made.

Glick’s discussion of former IDA Board Member Lynne Littman's films is especially welcome. Her Oscar-winning Number Our Days and In Her Own Time, which follows anthropologist Barbara Meyerhof as she prepares to die, are known. On the other hand, Littman’s earlier short, incisive reports for KCET and her strong feminist work such as Womanhouse is Not a Home are under-appreciated. That Glick folds her and African-American filmmaker Sue Booker (also KCET-based) into his text is heartening, although few other women are mentioned. There were almost no women with positions of creative control, even in independent documentary, during this period, but women were there behind the scenes. Freida Lee Mock and Joan Owens Myerson worked as associate producers for Wolper in the late 1960s, and Littman spent one day working for Stuart, leaving in disgust over his penchant for screaming obscenities at his assistants. Glick does not mention anecdotes like this one, as befits his scholarly work.

It is extremely heartening to read serious scholarship on Los Angeles' documentary scene, and this work is very serious. It began as Glick’s PhD thesis at Yale University, where his advisor was Charles Musser, one of the most highly regarded film historians in the US. Musser is known for his meticulous primary-source research, the methodology Glick uses, citing large numbers of original documents and conducting first-person interviews. A valuable work of original scholarship, Los Angeles Documentary is well-organized and carefully footnoted, with an extensive bibliography. As Glick notes, most written histories fail to acknowledge the important role that LA and the rest of the West Coast play in American documentary, choosing to concentrate on East Coast icons. He briefly compares the cinema vérité work of Robert Drew, Ricky Leacock, the Maysles Brothers, DA Pennebaker and Fred Wiseman to the Wolper structure. This comparison highlights a problem when Glick occasionally relies on older published work, such as Steven Mamber's 1974 Cinema Vérité in America, which, while valuable as an early resource, contains inaccurate information. This minor complaint aside, Los Angeles Documentary is an important addition to the field, especially because the writing is straightforward, understandable and laudably low in the use of academic jargon. Documentary makers who value the opportunity to understand how films of that era got made, and how the production and distribution practices established then continue to influence the market today, will profit greatly from reading this book.

Betsy A. McLane is the author of the book A New History of Documentary Film and is Director Emerita of IDA. She teaches at National University and Southern Oregon University.

END_OF_DOCUMENT_TOKEN_TO_BE_REPLACED

David's Devotees: Remembrances from Alumni of Wolper U.

Pioneer Award--Mel Stuart: Mastering the Rhythm of the Real

A Riotous Event: The Making of Wattstax