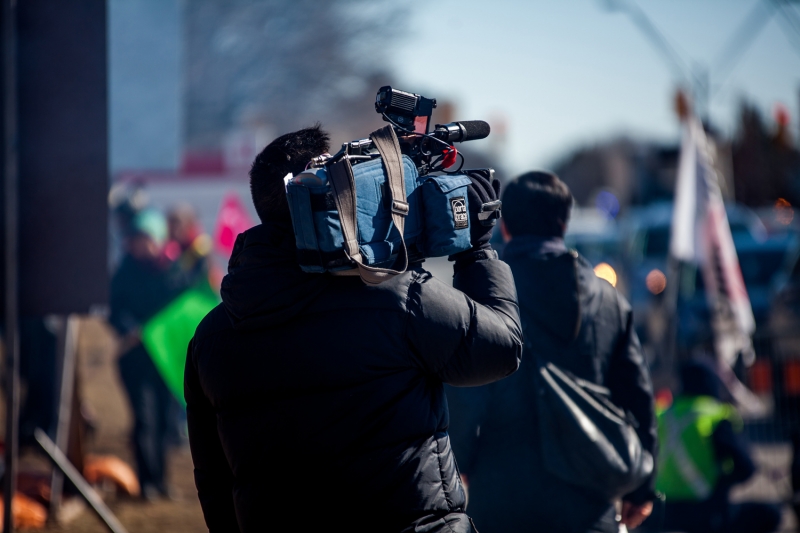 The First Amendment forbids laws that abridge freedom of the press. For this reason, federal, state and local law in the US can't compel a journalist to obtain permission from someone involved in the subject matter of a news story before including them in the story. Documentary filmmakers reporting on newsworthy matters are members of the press. Then why, you ask, does any documentary filmmaker or other journalist bother to obtain permission in the form of an appearance release from anyone if the First Amendment would save them the trouble?

The answer is that there are still practical and legal reasons for documentary filmmakers to obtain appearance releases, notwithstanding First Amendment protection.  In this Legal FAQ, we will discuss the typical content of appearance releases, the underlying purpose of customary provisions, and practical ways to leverage that First Amendment protection.

What Does a Documentary Appearance Release Typically Contain?

Some appearance releases go considerably further, such as by authorizing the producer to make re-creations (dramatic sequences) portraying the participant, fictionalize events involving the participant, or use the material authorized under the release in books and even scripted feature films. If a re-creation, fictionalization or similar production technique, or a book or other derivative, is actually contemplated, provisions like these are appropriate. But while a producer might think to include such provisions "just in case," they are objectionable to many participants and could stand in the way of a release being signed. In order for a producer to obtain signed releases successfully and without lengthy negotiations, it's wise to include provisions like these only when needed.

Why Might Documentary Producers Obtain Appearance Releases Even Though They Don’t Have To?

What Is an "Area Release" and What Purpose Does It Serve?

An area release is not a release at all; rather, it is a written notice that producers may post in an area where they record. The notice tells people entering an area that they are being recorded for a particular purpose. If, as discussed above, the permission of these people is not needed to record them in any event, the sign is a precaution that producers may take when obtaining individual appearance releases is not practical. However, posting an area release does not confer upon producers the same benefits of an appearance release signed by a participant and is most properly used only when participants appear fleetingly or incidentally, and are not featured on screen or shown engaging in controversial behavior.

Text should be printed in a large font and displayed prominently at all entrances and exits where recording occurs.

Can an On-Camera Verbal Release Substitute for a Written Release?

Obtaining a written release is best practice for a number of reasons. First, it's likely to be more detailed—and therefore more protective of the producer—than an on-camera verbal release. Second, it will conform to the requirement of insurers, distributors and others that written releases be obtained. (They may have to be convinced to accept a verbal release in its place.)

Some interview subjects, however, may consider signing a release beneath their station—for example, high-ranking political figures. Some might be nervous about signing legal documents without a careful reading or first getting legal advice. Some simply might be contrary in nature. Under any circumstances in which a prospective releaser refuses to sign a written release, a well-considered verbal release is better than nothing.

A verbal release should cover at least the most basic elements of a written release, and the simplest procedure is for a production team member to read the release with sound and video rolling and ask the interview subject to acknowledge the terms on camera. Those basic elements should include the purpose of the interview, where the interview will be used initially (i.e., in a specific film or episode, as well as in related advertising and promotion), and that the completed work in which it appears may be shown in all media and by all means of transmission and other delivery, worldwide and forever.

And if getting an interview subject to acknowledge all that is a problem, the next best approach is for a production team member to read with the camera rolling all that key information in the form of a notification, rather than as a request for acknowledgement. (e.g., "Before we begin, let me reiterate that this interview will be used for…")

Of course, if an interview subject refuses to sign a release before an interview begins, it doesn’t mean that she won’t sign immediately after, if asked. She first may need to know how the interview goes.

What Should You Do If You Discover in Post-Production That Your Team Neglected to Obtain an Appearance Release from an Interview Subject?

Notwithstanding everything above, the answer is not to immediately ask the interview subject to sign a release. To ask for a signature long after the interview is finished suggests to the subject that you need the release and invites a rejection if that person— having thought things over for a while—regrets the interview. (From the same perspective, it's generally better practice to get a release signed before an interview begins, rather than ask for it after it’s over.)

On the other hand, if you don't ask for a belated release, the subject might assume you didn't need one. (The subject freely gave the interview, didn't he?) And usually, as already noted, the First Amendment says you don't need one. But then you won't have the benefits of a release.

When an appearance release has been neglected, the better approach is to discuss the matter with your lawyer and with the distributor, exhibitor or insurer who wants the release to see if you can bend the requirements and do without it. While the absence of a release won't please them, they might agree that it's better to forgo it and rely on First Amendment protection than increase the risk of a claim (even an unsuccessful one) by requesting a release belatedly.

END_OF_DOCUMENT_TOKEN_TO_BE_REPLACED

E&O to the Rescue!