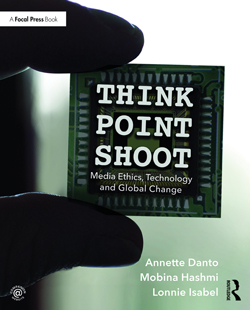 Whatever happened to the credo “If I can see it, it must be true?” This deeply held belief has been espoused both by mystics and hardcore scientists, and was reinforced by the invention of photography nearly 200 years ago. It has now been called into question in the cacophony of the digital age. As the US president tweets daily accusations of #Fake News aimed at any information he simply does not like, and while rich, white males in positions of power are dropping like flies in a sea of sexual harassment claims, a book about ethics, technology and global change could not be more welcome.

This book is a collaborative effort that grew out of a 2013 conference on global media ethics held at Brooklyn College. It includes the perspectives of 12 contributors, and is divided into three sections: 1) “Think”; 2) “Point and Shoot”; 3) “Post-Production and Distribution.” It is clearly designed as a teaching tool, and we can only hope that ethics is still being taught in schools, colleges and universities in spite of the fact that our current cultural climate makes the very term seem quaint.

It is difficult to imagine a book about media ethics that doesn’t acknowledge the legacy of George Stoney, a pioneer and practitioner of ethical standards in documentary. Author Annette Danto gives a nod to Stoney’s influence in her introductory remarks and mentions him at other junctures throughout the text. Danto is a filmmaker and professor in the Department of Film at Brooklyn College and she brings her hands-on perspective to the subject, while her colleague, Mobina Hashmi, as director of the Center for Global Television, contributes her more theoretical approach. Their collaborator, Lonnie Isabel, is a 30-year veteran of the newspaper business, having worked as a reporter covering politics and as an editor for Newsday, The Boston Globe, the Boston Herald and the Oakland Tribune. Together, this trio manages to provide some clarity to a subject shrouded in the murkiness of competing political agendas.

“Context matters!” is one of the key tenets emphatically introduced in the first section, on conceptual framing, and weaves its way through the book to the end. We can never lose sight of the variables of location, time, race, class and age that affect our understanding of an image. Comprehending how an image can be interpreted is essential. Whether that image is part of the raw footage an editor must consider when constructing a story at the beginning of a project, or a marketing director in framing audience perception in the distribution of the finished film, communicating cohesive meaning should be the end result. Historical context plays an important role in demonstrating how visual storytelling both shapes and reflects shifting audience perceptions. Danto uses the example of D.W Griffith’s 1915 film Birth of a Nation, which became a vehicle for perpetuating negative racial stereotypes. She compares Birth of a Nation to the 2013 award-winning feature film 12 Years a Slave by Steve McQueen. Almost 100 years after the Griffith film, audiences came out of the theater with a very different, much more personal, empathetic grasp of what it meant to be a slave. Times have changed and while some believe the changes are not swift enough, nor do they go far enough in the right direction, these two films demonstrate that American societal attitudes towards slavery have indeed changed.

“Why do you want to create?” is a valuable question posed to readers in the “Think” section of the book and will serve students well in helping them to decide exactly what kind of media-maker they want to be. Awareness of one’s motives is a skill that many more experienced professionals might also put to use. Relying on stereotypes can easily occur when establishing a premise or conceptual framework if we are not rigorous in evaluating our intent. For most documentarians, ethical considerations have been central to our understanding of how we practice what we do. Danto and Hashmi remind us in specific examples referenced throughout the text that these same concerns should also factor into narrative and feature filmmakers’ work.

The chapter “Funding and Competing Agendas” is extremely important in evaluating the ethical integrity of any project. Often the cry of “follow the money” in investigative journalism leads to convictions for criminal behavior, or at least revelations of undue influence with serious negative outcomes. Christine Chow, a successful documentary filmmaker with an extensive filmography, edits this chapter and includes helpful tips for proposal writing. Her personal experiences dealing with the demands from funding sources to shape her creative perspective are illustrative of the delicate balance filmmakers may need to achieve to complete a project. Chow goes into some detail about the process of navigating funding from the Corporation for Public Broadcasting (CPB). Although not as influential as it once was, CPB still provides some of the financing behind most documentary projects that air on PBS. Sometimes the PBS demand for objectivity conflicts with the filmmakers’ aesthetic or ethical point of view. As Chow tells us, she once had to sacrifice CPB funding in order to maintain control of her artistic vision. In spite of the fact that most of her films were completed decades ago, Chow shows an appreciation for the benefits as well as acknowledgement of the pitfalls of crowdfunding via Kickstarter, Indiegogo and other options made possible by the proliferation of digital technology.

Cinematographer Scott Sinkler opens Chapter 6 with a quote from Salman Rushdie: “A photograph is a moral decision taken in one eighth of a second.” Sinkler reminds us that the person holding the camera is on the front lines of decision-making when it comes to ethics, that “questions of truth, distortion, context, fairness, exploitation, consent, doing harm and privacy must be assessed and addressed in real time—so it’s essential to have a good grasp of them before you pick up the camera.” In the very next paragraph he informs us that in 2013 the number of mobile phones in use on the planet exceeded the world’s population for the first time, and 85 percent of those phones had cameras. That mind-boggling picture of masses of people with the ability to create and distribute visual media with no moral constraints is an argument to bring back courses in ethics as a basic core curriculum, even in elementary school, since most kids have cell phones by the time they hit 6th grade.

In Chapter 9, “Hidden Camera: A Conversation on Surveillance,” philosopher/computer scientist Samir Chopra and Mobina Hashmi discuss this most timely subject. We often hear the arguments about our “right to privacy” when it comes to surveillance. Chopra suggests, “Transparency, accountability and consent are the core ethical concerns raised by pervasive media surveillance.” Their discussion of secrecy and democracy is yet another powerful topic that speaks to the relevance of this book as a teaching tool well beyond film studies.

In the final chapters ethical concerns during post-production and distribution become legal concerns regarding copyright and fair use. Practical guidance and resources are provided on how to register your work, as well as understanding errors and omissions liability insurance requirements, whom it protects and why you need it.

The liberal use of case studies and real-life examples throughout the book is particularly effective. Each chapter ends with a summary of “Take-Home Points” and extensive bibliographies for additional reading. The real-life example on the final page is about the personal ramifications of “Twitter Shaming.” This one lesson would qualify Think Point Shoot as recommended reading for teachers and parents dealing with all those thousands of kids running around with smartphones in their hands, making media.

Cynthia Close is the former president of Documentary Educational Resources. She currently resides in Burlington, Vermont, where she consults on the business of film and serves on the advisory board of the Vermont International Film Foundation

END_OF_DOCUMENT_TOKEN_TO_BE_REPLACED

Creators vs. Consumers: Reclaiming the Conversation About Copyright

'The Art of Nonfiction Movie Making': Commitment Trumps All