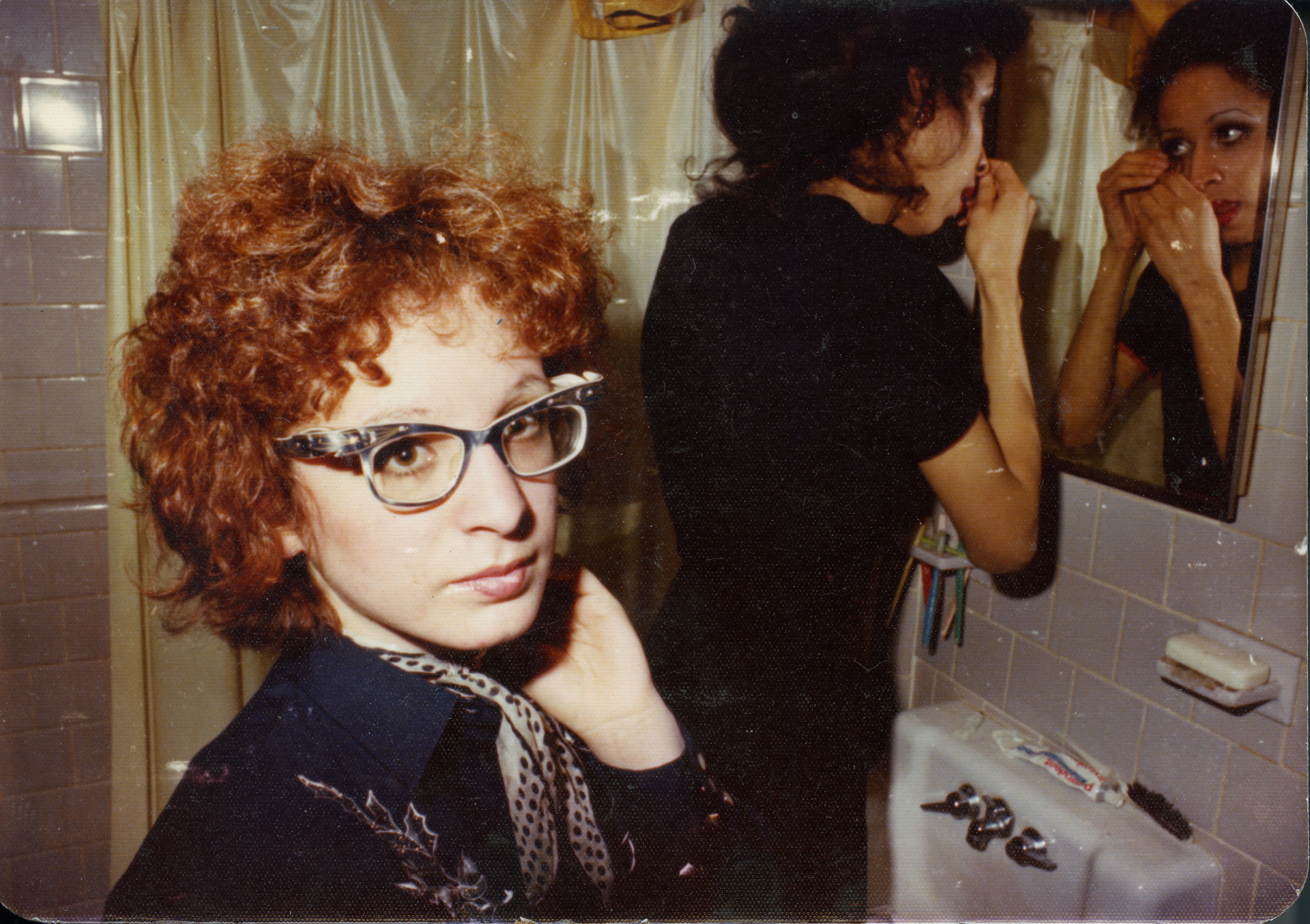 The festival’s Centerpiece Selection was Laura Poitras’ All the Beauty and the Bloodshed, about the photographer Nan Goldin and her battle against the Sackler family, makers of OxyContin. This is a case where the personal is political. For many years, Goldin was addicted to the opioid after a surgery recuperation got her hooked. Goldin started the film as a way to document the work of PAIN (Prescription Addiction Intervention Now), a group she co-founded to hold the Sackler family accountable for their role in profiting from the opioid crisis. PAIN filmed protests at prominent museums, that received Sackler money and whose galleries bore the Sackler name. After some time, Goldin invited Poitras to direct.

The CitizenFour filmmaker expanded the scope beyond PAIN to interweave present and past: PAIN’s activism with archival clips and Goldin’s photographs and slideshows of her stigmatized friends from the 1970s and 1980s. The photos and clips are accompanied by audio of Goldin reflecting on these images, on her family background and her sister’s suicide, and on the show she curated in 1989, the NEA-censored AIDS exhibition Witness: Against Our Vanishing. PAIN borrows heavily from AIDS protest tactics.

PAIN has had considerable success. After Goldin refused a show at London’s National Portrait Gallery, the museum agreed to turn down Sackler money. The dominoes quickly fell, with the Metropolitan Museum, the Louvre, the Guggenheim, and others following suit. The activists have even had success getting museums to take down the Sackler name, as The Met did for its Temple of Dendur hall. All the Beauty and the Bloodshed is a powerful, complex, politically charged film—among Poitras’ best.

Poitras calls her film a portrait, rather than a biography. But there were several fresh takes on the biographic film. Most enjoyable and heartfelt was Chris Smith’s Sr., done in conjunction with Robert Downey Jr. and his father. Robert Downey Sr. was the director of such underground hits as Putney Swope (1969) and Greaser’s Palace (1972). Filmed over three years after Senior was diagnosed with Parkinson’s Disease, the documentary is at once an exploration in father-son relationships, a film about filmmaking, and a meditation on death—“but not in a bad way,” Robert Downey Jr. emphasizes in the film. The most innovative aspect is when Senior gets hold of Smith’s footage and cuts his own film. Smith incorporates snippets into Sr. They have the same loose structure and absurdist logic as Senior’s own films and are just as entertaining.

The line wrapped around the block to hear French author—and newly anointed Nobel Laureate for Literature—Annie Ernaux speak. The memoirist was here with her very first film, The Super 8 Years, made with her son, David Ernaux-Briot. The visuals comprise Super 8 footage that her ex-husband shot between 1972 to 1981, before her breakthrough as a writer. Since the reels had no sound, the audio track has the author reading her reflections on the personal—family life, her writing, the dissolution of her marriage—interlaced with historic and cultural markers of that era. “They’re normal moments, but that doesn’t mean they’re outside of history,” she said during her Deep Focus talk. “The film has a double intention. On the one hand, there’s this personal family story, the private story of my evolution, and on the other hand, it’s this story about a collective dive into history, the history of these very particular years which followed the global movement of 1968, of a lightness that no longer exists.”

Margaret Brown’s Descendent hits with a wallop and reverberates long after. Its entry point is the search for the last slave ship, the Clotilda, which was clouded in myth and speculation until it was found in 2019. Descendants from this 1860 schooner founded Africatown, near Mobile, Alabama, the director’s hometown. But the film is about so much more than finding the slave ship. “Everyone wants there to be some kind of closure, and the finding of the ship would be at the end of the film,” Brown recalls people advising her. “But to me, it was always about the community.”

The film is also about the descendants’ search for their history, environmental racism, and the ways in which unequal power between Black people and white people lingers to this day in terms of who profits off the land and who might profit off the slave ship. The film includes a rare film clip of Cudjoe Lewis, the last known survivor of the Clotilda, from whom many Africatown residents descended. His story was told by Zora Neale Hurston in Barracoon: The Story of the Last Black Cargo, written in 1931—but not published until 2018; Brown and her team filmed descendants reading passages from that book. The film also gets into the battle over zoning, Africatown being surrounded by heavy industry, which pollutes the air and leaves a heavy stench over the town. “It’s very much the Black experience,” says producer Essie Chambers. “There are communities like this all over the country, with the same complex of injustices they’re dealing with. But these people are living history.”

From film critic Elvis Mitchell comes Is That Black Enough for You?, a look at African American films from 1968 to 1978. Mitchell said in a Crosscuts Conversation that it started as a book idea, but publishers weren’t interested—and now we’re blessed to have this film with so many movie clips from that decade. The range is wide, from Shaft to Uptown Saturday Night to Lady Sings the Blues. Their influence on popular culture and music is examined, which Mitchell thinks is underappreciated. Interviews with Charles Burnett, Samuel Jackson, Whoopi Goldberg, Laurence Fishburne, Harry Belafonte and others give insight into the personal impact these films had. But Mitchell broadens the canvas to include depictions of Black people going back to the early days of cinema. “All I do is an outgrowth of the question ‘What is not there?’ ” he said in the Crosscuts Conversation.

Two of the most innovative nonfiction films were Elisabeth Suren’s Maria Schneider, 1983 and Alain Gomis’s Rewind and Play. Both made use of archival TV interviews, but in quite different ways. Suren bases Maria Schneider, 1983 on an interview the French actress did that year with the show Cinéma Cinémas. She reenacts this interview with three actresses—one white, one Black and one Asian. Her intent was to expand the resonance and trauma of this interview, which contains leading questions about her experience on Last Tango in Paris. The director states in the film’s production notes that “since 2016, [Last Tango in Paris has] become the go-to origin story for sexual misconduct on a film set.” Schneider once told a journalist that she felt “a little raped.” The film is just 24 minutes, but it packs a punch.

Franco-Senegalese director Alain Gomis’s Rewind and Play takes the rushes from an interview Thelonious Monk gave to French TV’s Jazz Portrait after he wound up his European tour in 1969. Reworking two hours of rushes, the film reveals Monk’s personality and his genius on the piano, but it also underscores the trials he faced in this circus of an interview—the inane questions, the interruptions and repetitions for the camera, the steering away from the topic when Monk had complaints about his treatment on tour. Gomis said his intent was “to expose the factory of the representation of Thelonious Monk and the violence associated with this machine.” But he notes it’s about the music first—and what eloquent music it is.

Monk’s son, T.S. Monk III, came to the post-screening Q&A. When an audience member said one could see signs of dementia, the son responded, “My father never suffered from any form of dementia, ever. What my father did suffer from was being a Black man in America.” He said it took 10 years to get a check for “Round Midnight.” “You ask him a stupid question, he chose not to answer. But it wasn’t because he was unaware of what was going on. It was because he was disgusted. When the world tells you that you’re a genius, but every white genius that you see has a house, they’ve got a car, they’ve got a bank account. […] All that stuff will make you not want to deal.”

A different type of music documentary was Martin Scorsese and David Tedeschi’s Personality Crisis: One Night Only. It’s a portrait of David Johansen, lead singer of the androgynous, proto-punk New York Dolls from the early ’70s, who reinvented himself a decade later as the hepcat Buster Poindexter. The film centers around Johansen’s January 2020 set at Café Carlyle but incorporates clips and photos from his whole career. The film joins Scorsese’s long list of rock’n’roll documentaries, which includes films about Bob Dylan, the Band, the Rolling Stones and George Harrison, as well as a series about the blues.

Speaking after his film, Scorsese said about the New York Film Festival, “Here’s the key: There are no awards here. You don’t have to compete. You just have to love cinema.”