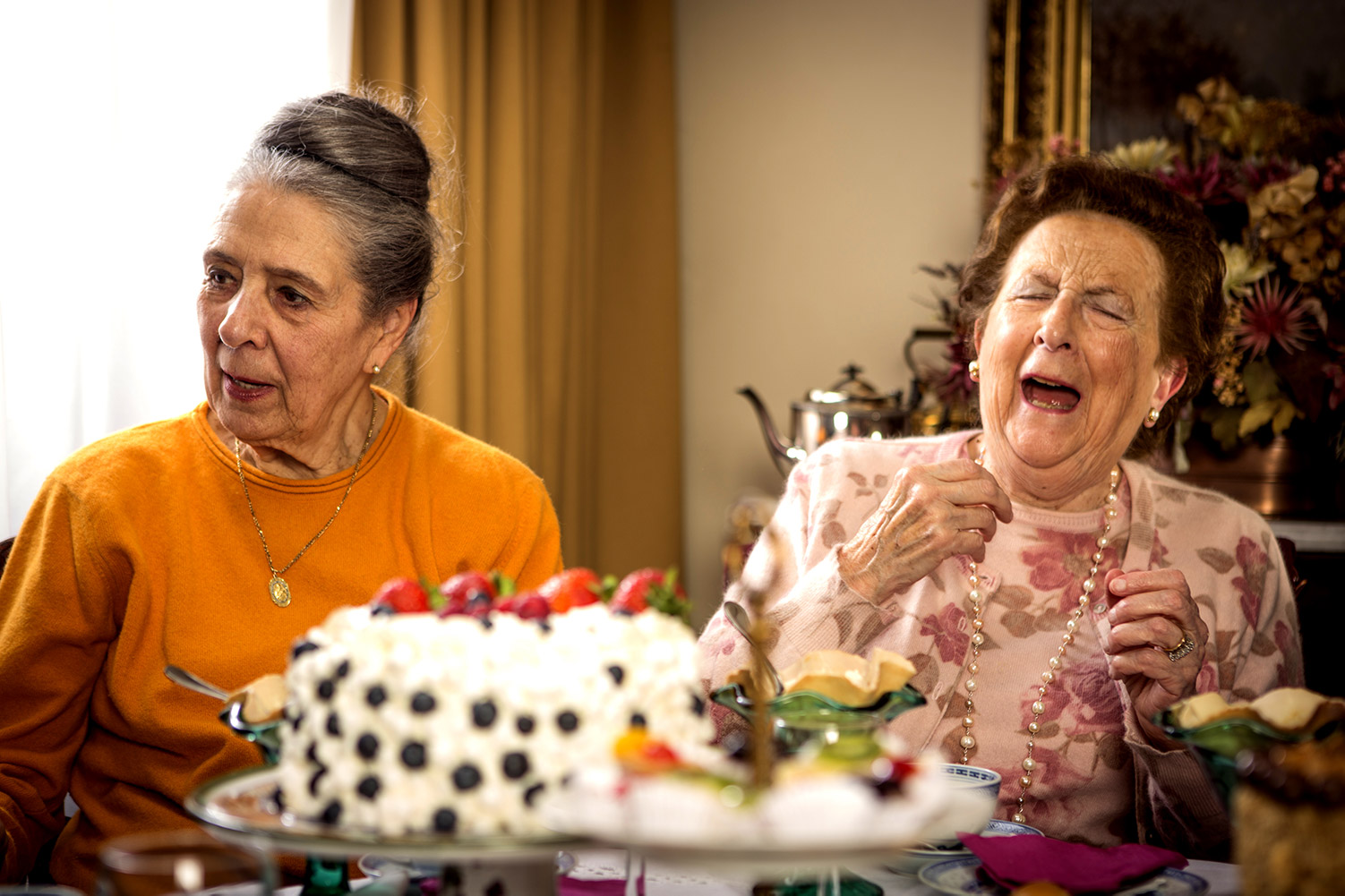 In the US and Europe, there is a tendency to think of Latin American documentary filmmaking in terms of coups, government repression and revolution, but the new reality in many Latin American nations is a different kind of revolution. Case in point: Tea Time (La once) by Maite Alberdi of Chile, in which a group of upper-middle-class women, friends since high school, have been meeting once a month for “tea time” for 60 years.

Alberdi’s documentary, which aired on POV in 2015, is one of too few Latin American documentaries to reach audiences in the US and Europe, despite being part of a rapidly growing number of intimate documentaries from the region that are more concerned with authorial language and reflection than a cinema of denunciation.

This change, which has been slowly building over the last two decades, is just now starting to be recognized by international festivals that can serve as platforms for distribution. In this article, we will look at two organizations created by filmmakers that have successfully negotiated government support and policies that have opened greater opportunities for documentary filmmakers in the form of training, information exchange and distribution: DocMontevideo in Uruguay and CCDoc in Chile.

For Luis González Zaffaroni, the founder of DocMontevideo, the expanded field of documentary filmmaking, both in terms of subject matter and narrative approach, has been central to his work. For him, a key film that marks the transition from a certain kind of militant political filmmaking to a more personal political filmmaking in the region is the Argentine film Los Rubios / The Blondes (2003), by Albertina Carri. The daughter of two intellectual militants who were disappeared by the last civic-military dictatorship of Argentina, Carri focuses on a personal journey of identity and the idea of being defined by her parents’ terrible and dramatic story. In doing so, the film touches on many issues—the disappearances, the repression, the complicity of private citizens—but with a different agenda. Further, Carri introduces elements of fiction in order to reflect upon the meaning of history on the personal level.

Shortly after Carri made Los Rubios, González Zaffaroni was in Barcelona studying for a master’s in documentary filmmaking. In 2008, he returned to Uruguay with a “perhaps romantic view of bringing European connections to support the development of Latin American cinema. I imagined creating a group of commissioning editors for Latin America.” But the reality in Montevideo at the time would require a lot of dedicated work and patience. Funding for documentary film in Uruguay was very limited, and what was being developed in terms of government support was focused largely on fiction film.

González Zaffaroni started developing the idea by focusing, as a first step, on an acquisitions market for Uruguayan film. With the support of Orlando Senna, co-director of the landmark Brazilian docu-fiction Iracema (1975), who at the time was the president of TAL – Latin American Broadcast Association, the first DocMontevideo was born in 2009. This inaugural edition was focused primarily on the training of commissioning editors in Latin America and reflecting upon the connections between cinema and television; the program also produced an acquisitions market that, due to the limited offering of Uruguayan documentary at the time, included all genres of Uruguayan cinema.

The second year DocMontevideo expanded to include a “space for reflection” about documentary film, coordinated by Marta Andreu, who was involved from the beginning in the construction of the concept of DocMontevideo and has become known in Latin America for her seminars on documentary analysis. “In 2010, we undertook the first pitching forum, which marked the beginning of a project development programs, bringing in public television as an important player,” González Zaffaroni explains. “People like Claire Aguilar [then of ITVS], Simon Kilmurry [who was with POV] and Bruni Burres [Sundance] were very important for communicating globally what was happening in the south. It started as a real exchange, and opened up public television from being an ‘official’ channel into becoming a space for something more creative.” DocMontevideo has expanded to include documentary series; the organization hosts the annual meeting of public broadcasters for Latin America; and it has developed the first doc hackathon in Latin America, in partnership with the National Film Board of Canada.

Now about to celebrate its tenth year, DocMontevideo has established itself as an important organization and event for documentary film in the region. In the last five years, representatives from IDFA, Sheffield and DOK Leipzeg have visited DocMontevideo in search of films to premiere at their festivals. In the past three years, Raul Zambrano of IDFA has selected a number of films to both screen in Amsterdam and participate in the fest’s Academy. And what is important to note is the diversity of the work such as El campeón del mundo (The Champion of the World), by Federico Borgia and Guillermo Madeiro, about an ex-world champion of body-building who retired to his small town in Uruguay and is now considering a return to competition at the age of 43, or La flor de la vida (Flower of Life), by Claudia Abend and Adriana Loeff, about a couple, together for five decades, who enter into the crisis of whether to stay together or say good-bye.

Meanwhile, on the Pacific coast of South America, just one year after the first edition of DocMontevideo, Paola Castillo and Flor Rubina, with the support of ADOC (Association of Documentary of Chile) and CAIA (The Council for Audiovisual Art and Industry), founded Chiledoc, now known as the Chilean Documentary Corporation (CCDoc). Its main goals are to increase the distribution and commercial development of Chilean documentary locally and abroad, as well as to offer training to producers. The corporation organizes a range of events and activities in support of documentary filmmaking in Chile, including Conecta, a four-day industry event held in Santiago in December.

Whereas DocMontevideo grew largely as a response to González Zaffaroni’s experiences in Europe, CCDoc was initially able to establish itself using a local policy, a fund created by the Chilean government in 2010, part of the nation’s bicentennial celebration that looked to commercialize Chilean audiovisual projects abroad. Flor Rubina and Paola Castillo, CCDoc’s co-founders and directors, saw this call for projects as an opportunity for documentary filmmakers and producers to develop networks. “Because Chile has had such a small market, and even smaller with respect to documentary films, we have always had to reach out for distribution,” Castillo explains.

In historical terms, it is important here to mention the work of celebrated Chilean documentary filmmaker Patricio Guzmán (Nostalgia for the Light, The Battle of Chile) in exposing what would become the “new guard” of Chilean filmmakers to multiple ways of telling stories in the late ’90s. Guzmán founded FIDOCS, the International Documentary Festival of Santiago, in 1997, and was able to use the festival as a platform for connecting a new generation of filmmakers to the work of recognized international filmmakers and reconnecting them to a past that had been erased and prohibited for two decades.

However, the documentary world in Chile has come a long way since then. Through building a cooperative process in which documentary filmmakers and producers work collectively, rather than in competition against each other, CCDoc has managed to successfully expand both in terms of its vision for a sharing of ideas among this new guard of Chilean filmmakers, as well as with other filmmakers from the region, and for providing more opportunities to bring these works to a global audience with a range of activities that include promoting Chilean films to educational institutions worldwide, a program for reaching Chilean audiences in alternative spaces, and of course workshops for producers aimed at broadening approaches to documentary filmmaking. “Cinematic language is very important to us,” Castillo maintains, citing more personal work like Beyond My Grandfather Allende (Allende, mi abuelo Allende), Marcia Tambutti Allende’s documentary about her family and its relationship to her famous grandfather, whose democratically elected socialist government was crushed by the ’73 coup. The film won the Golden Eye Award at Cannes in 2015.

And yet, despite the individual victories achieved by some Latin American documentaries with the support of these organizations, Carlos Gutierrez, executive director of Cinema Tropical, a New York-based nonprofit that has spent the last 18 years distributing, programming and promoting Latin American film in the United States, argues that bringing this broader range and vision of documentary filmmaking to US audiences is still a difficult task.

“Despite the ongoing innovations of Latin American filmmakers, public television and NGOs in Europe, the US and Canada are very much behind the times in what they will program,” Gutierrez asserts. “They still relegate Latin American cinema to a very limited role of telling stories about favelas, immigration, drug trafficking and the horrors of dictatorships that does not recognize our current reality. The hegemonic narrative they have defined for our films is a limited space that only allows for documentaries with so-called ‘social impact’ and historical epics, and ignores the richness and diversity that our documentary work contributes to the international world of filmmaking.”

Ironically, it may be this very diversity of approaches and broad range of content that is making work harder for funders and distributors that, used to a singular idea of Latin American cinema, need to rethink how to support and share it. Hopefully, in the long run, the collective efforts of programs like DocMontevideo and CCDoc will be able to change how many of us think about Latin American cinema, taking it from being a label that we use to readily pigeonhole the “other” to a platform upon which we can learn to communicate as equals.

Richard Shpuntoff is a filmmaker and translator, living in Buenos Aires since 2002. He is currently finishing an experimental essay documentary entitled Todo lo que se olvida en un instante (Everything that is forgotten in an instant), funded by the Argentine National Film Institute.

END_OF_DOCUMENT_TOKEN_TO_BE_REPLACED

Finding the Past in the Present: Patricio Guzman's 'Nostalgia for the Light'