I opened an email message from Jim LeBrecht, sound designer and mixer, disability rights advocate, and co-director with Nicole Newnham of the film Crip Camp. “It was great to see you on the Zoom call today,” he said. “I thought I heard mention about you making a film. I wanted to know more about that if you’re willing to share.” This email led to Jim sharing information about FWD-Doc, adding me to a Facebook group for filmmakers with disabilities, and posting about my work in the group. I did some Googling, read bios of the founders of FWD-Doc, and became very excited that there was a whole community, not just a handful, of filmmakers like me. What a gift!

I had the opportunity to talk to the founding members of FWD-Doc and after a lot of back and forth trying to remember who introduced who and when they had first met, it was obvious that these accomplished filmmakers have much respect and admiration for each other. LeBrecht; Day Al-Mohamed, author, disability policy strategist, and director of Invalid Corps; Lindsey Dryden, Emmy-winning writer, producer, director and founder of Little by Little Films; and Alysa Nahmias, award-winning writer, producer and director of The New Bauhaus had all worked together before the 2018 IDA Getting Real conference, but that event was a pivotal part of the FWD-Doc story.

The story begins when LeBrecht read about the 2016 Getting Real conference. “It was all about inclusion and there was nothing about disability at all,” he explains. “It didn’t make me terribly happy and I reached out via The D-Word: ‘How can you be talking about diversity and not be talking about disability?’ Marjan Safinia, who was president of the board of IDA, responded immediately and said, ‘You’re right; we should not be overlooking people with disabilities.’”

Fast-forward to 2018, when LeBrecht began working with IDA to organize a panel of documentary filmmakers with disabilities and a convening at the Getting Real 2018 conference. They secured scholarships and travel funds that made it possible for many filmmakers with disabilities who otherwise couldn’t have attended to come out to Los Angeles. The panel included LeBrecht, Al-Mohamed, Cheryl Green and Jason DaSilva, and was moderated by disability activist Lawrence Carter-Long of Disability Rights Education & Defense Fund. “It wound up being well attended,” Lebrecht recalls. “But it was the convening afterwards that could have gone on for hours. It was this incredibly sentimental moment in which many of us in that room had never been with somebody else who was a filmmaker and also had a disability, or was out about having a disability.”

Dryden adds, “I think it was a complicated space to lots of people because there were folks with invisible disabilities who were present, but not necessarily comfortable to talk about their experience. And lots of people were navigating their own identities, their own comfort with disclosure and their own ableism, which I think is something that we all encounter. But, there was a sense of possibility and solidarity.”

A sign-up sheet circulated, collecting many names. This list turned into an email train, then a Facebook group and now a website with information available for filmmakers with disabilities and allies. As it states on the website, “FWD-Doc seeks to increase the visibility of, support for, and direct access to opportunities, networks, and employment for D/deaf and disabled filmmakers. They aim to foster greater inclusion of D/deafness and disability within the broader entertainment industry.” 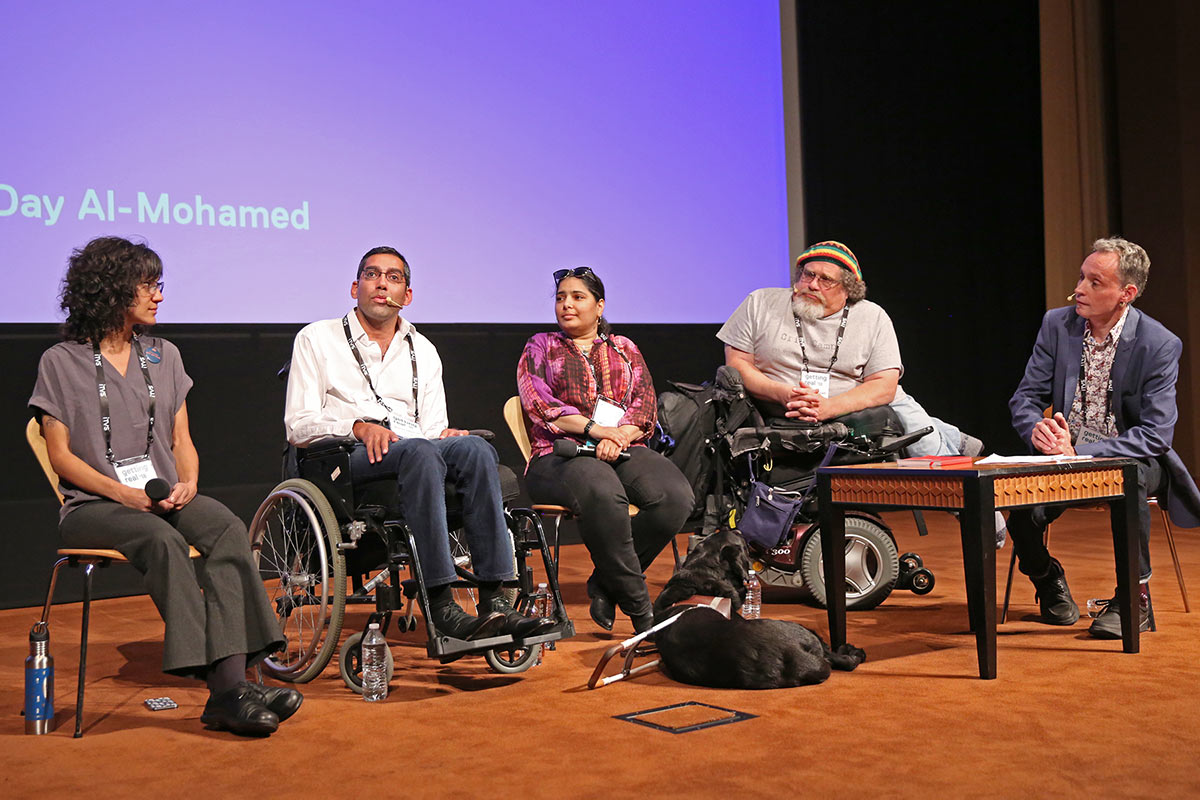 Inspired by organizations like A-Doc, Brown Girls Doc Mafia, Queer Producers, Film Fatales and the Documentary Producers Alliance, the founders of FWD-Doc saw a need for a similar association for filmmakers with disabilities. “We’re at this time period of this huge movement towards a recognition of a lack of diversity within the industry and a recognition that there is a place for people to tell stories themselves and an awareness that maybe we need to find a way to make more space,” says Al-Mohamed.

Dryden recognizes there are problems in the documentary landscape and people are having to invest so much time and energy in trying to create a space that simply allows them to do their work. “There’s these wonderful benefits of building a community and engaging with each other, encouraging, inspiring and supporting each other, and there’s also the burden of that,” she notes. To address this, FWD-Doc has a multiple-strand mission that includes providing support for filmmakers and influencing the industry. Nahmias points out a convergence between community building and advocacy. “A lot of it is tied, but for example, one of the things we would like to do is create a database similar to what Brown Girls Doc Mafia has created for hiring,” she explains. “So, you’re serving the community and also advocating for different hiring policies and inclusivity in the doc world.” The work and change can be incremental but will ultimately lead to systemic change.

As organizations have moved to virtual programming, FWD-Doc encourages programmers to think about accessibility from the beginning and provide captions and ASL interpreters. If that is not possible, add captions or transcripts when reposting. The idea is that after doing this once organizations understand what true inclusion looks like and get in the habit of thinking about access at every level. “Once you figure out how to do this stuff, it’s not hard,” Nahmias maintains. “It’s not as expensive or challenging as people think.”

In regards to the narrative and who gets to tell the stories, Al Mohamed says, “Disability has often been a subject of documentary because it’s got that great inspirational, overcoming type of a story that makes for great television. Stories get told certain ways over and over, but there are more ways to tell disability stories. Having folks with disabilities be an integral part of the making of any doc helps ensure you don’t get caught telling the same story.” She adds, “I’ve never been keen on telling someone they should never tell a certain story, but I do think that ensuring that you’ve got folks who’ve lived the experience means you’re actually telling an authentic story and not your outside perception of it.”

The Question of Allyship

In some instances it can be difficult to work with allies, but it was never a question that FWD-Doc include allies in the work they are doing. It came naturally with a spirit of dialogue and responsibility to listen to each other, create opportunity, uplift each other and understand and recognize that we all have different levels of privilege.

“People do want to know what they can do and part of our work is to provide options, ideas and information—this is what you can do, this is how to be effective, these are the results to share, this is the information that will enable you to do this, this and this,” Dryden explains.

Nahmias suggests taking the initiative and not waiting to take action because someone is making you. She says a pledge that allies can take for themselves is, “I will not participate in a panel that’s not accessible. Or, I’m going to budget for audio description and captioning in the festival delivery for my next film.”

Having to always ask for accommodations places burdens on people with disabilities, so when others have your back, it can be a relief. Dryden recalls recently being invited on a panel about identities and intersections. When asked if the panel would be captioned, organizers said few people requested captions during registration, so they wouldn’t be providing them. “While I was filling my lungs to make my next statement, a colleague also on the panel said, ‘You do know that Lindsey couldn’t speak on the panel if it wasn’t accessible to people like her, right? My organization will pay for captions if you’ve got a problem with that.’” Organizers were shocked but it started the conversation and ultimately they did the right thing. “It was awesome because she made the ask from the point of view of somebody with power,” Dryden explains. “She’s someone with resources and expertise. Her ask meant that I didn’t have to make that ask and I didn’t have to be the grouchy person in the room.”

FWD-Doc membership has grown to over 100 filmmakers with disabilities, as well as allies. The organization can look forward to more convenings, mentorship opportunities, educational webinars and how-to guides, case studies, member profiles on the website, databases on talent (filmmakers with disabilities—FWDs) and accessibility providers (sign language interpreters, CART and accessible film deliverables), and meaningful partnerships with other organizations. Because disability is an identity anyone can and probably will belong to at some point in life’s trajectory, Lebrecht points out, “Part of the FWD-Doc mission is to work with other organizations that are focused on different marginalized communities in saying, We are part of your community also.”

Founding members are providing consultation on industry initiatives, including the recently released “Independent Documentary—Filming in the Time of Corona” guidelines issued by Sundance, Field of Vision and Sundance. By engaging in conversation with film festivals like DOC NYC and Camden International Film Festival, they are leading the way in representation of D/deaf and disabled talent across panels/discussions. Dryden emphasizes, “Any kind of advocacy work we’re doing is only so that we can end up having the conversations about creative that we’re all good at. If you want to invite us to be on panels, don’t let them be panels just about diversity, don’t let them be panels about disability, don’t let them be panels about the ways that we need to fix the industry. Put us on panels about talent and about expertise and about creativity because that’s what this extraordinary group of people has.”

New members can sign up by emailing hello@fwd-doc.org to receive a questionnaire to fill out, in order to become a part of the listserv and database of active filmmakers with disabilities. The Facebook group can be found here.

Reveca Torres is an artist, filmmaker and disability advocate. She is founder of BACKBONES, co-director of ReelAbilities Film Festival Chicago and a 2020 IDA Documentary Magazine Editorial Fellow.