From Cancer to Cause: Sandra Lee's Journey 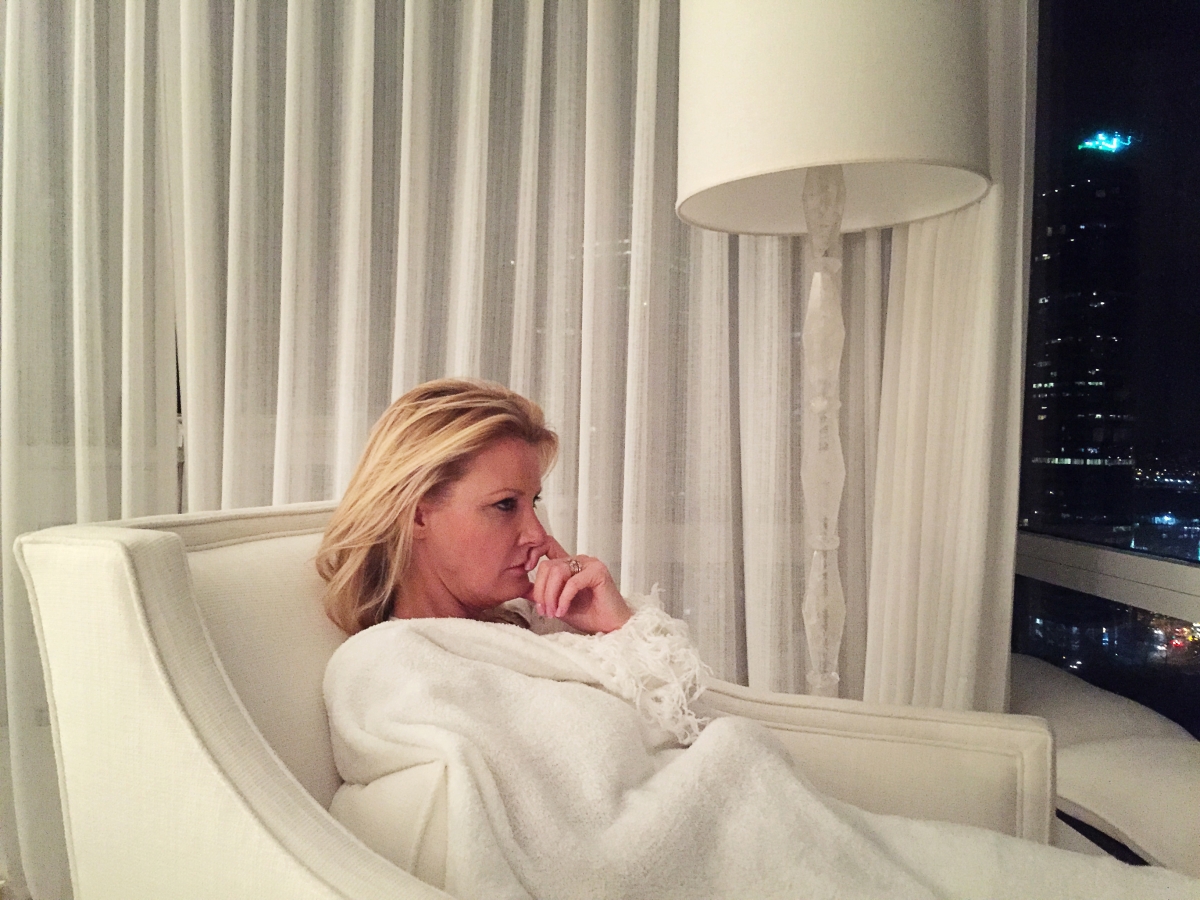 After her breast cancer diagnosis in 2015, Emmy Award-winning chef, author and magazine publisher Sandra Lee chose to invite cameras to her medical appointments and consultations, into the operating room where she underwent a double mastectomy, and to witness her recovery process in the hospital and at home. The resulting documentary short, RX: Early Detection, A Cancer Journey with Sandra Lee, directed by Cathy Chermol Schrijver, is a raw, intimate look at her experience with cancer. Lee is now cancer-free and passionate about the importance of early detection for both women and men: “This is not about women’s cancers. This is about cancer.”

Documentary spoke with Lee over the phone about her experience making the film, why she loves short-form documentary, working with HBO, and plans for future documentary work.

When you decided to document your experience, what called you to creating a short film over, for example, photography, or writing a book, or recording a podcast?

Sandra Lee: You can't really show in detail what this looks like by doing anything other than film. I decided to do a short because the subject matter is so intense and because that is how younger and younger generations are digesting content. My focus is not just on my age and above, but even more importantly on where the epidemic is now stemming from, which is a younger and younger demographic. If you look at the new Journal of the American Medical Association reports, the new epidemic in men's cancer is colon and rectal, and it’s boys in their 20s and 30s. So in order not to alienate and to be as inclusive as possible, for everybody’s well-being, the short documentary was my target.

When did you decide you were going to start filming?

We filmed the very first doctor’s appointment after diagnosis. I was starting a production company, and I was going to have to tell the woman who I’d hired that I couldn’t do it because I had to deal with my diagnosis. She had the forethought to say, “Listen, why don’t we film everything? For two reasons: who knows what we find and what we capture that could be of use and helpful to people, but also, just in case you decide you don't want to make any of this public, you’ll have a reference of what all the doctors have said.”

We filmed on a tiny handheld camera that I think is from the early ‘90s; we had to get tapes special-ordered from Best Buy that were so old and so little. This documentary was done the way documentaries used to be done: there was no lighting, there was no audio. There was nothing fancy about this. It is just the raw truth of what it looks like after you receive a diagnosis and the process you’re going to go through.

I wanted to do it because I could not find what I needed for myself. I couldn’t find the information that this film communicates. Just going through the process of functioning in your life is as traumatizing as the diagnosis, because all you want to do is scream, “I have cancer!” and curl into a ball. But what you have to do is walk one foot in front of another every single day to doctor’s appointments, and to work, and to do whatever it is you need to do while you’re living your life with this disease inside you. So it shows that compartmentalization of a day, just getting through the day and what that looks like. It then shows the doctor’s appointments: What do those conversations really mean and look like? How can you utilize them? What’s appropriate to retain? It shows how much information is being thrown at you, and wanting to digest anything because you’re so overwhelmed with your truth and your reality.

What the film does well is really capture the morning of getting prepped for surgery. They wanted to put me on a gurney and wheel me into the operating room, and I just said no. I will walk into that room on my own two feet with my head held high. I was not going to let cancer defeat me in any way, shape or form, nor was I going to let it make me feel sorry for myself.

Then it shows what happens during the surgery, and it shows the aftermath of how intense that surgery is and what your body goes through, not only during the operation, but directly after the operation and then for the next weeks. It’s a very slow recovery. And, finally, it shows that we were able, because God gave me the cancer for clearly a very specific reason: to change laws here in the State of New York that allow greater accessibility.

So the film really has a lot of masters: first and foremost, the master of early detection and changing laws; secondly, the master of those who are diagnosed, whether it’s past, current or future diagnosis. What did you go through? What are you going to go through? Here’s what it is;  just be prepared. And thirdly, to service your family. So many family members don’t know what to do and how to be supportive. What is it you need to know, and how can you best be a great caregiver? And that is what this film also does—it gives everybody the knowledge and the tools that they need.

Were there any moments you requested not be filmed?

No, because that doesn’t help anybody. I wanted to put more in there than HBO was comfortable with. I’m not about that high-end, sexy, here’s your red-carpet situation; I’m more about what is the reality, and how does this service other people? What is the purpose? It’s certainly not a vanity piece. I think that if you can give more information, not less, you can only help people more, not less. But there were things that they felt, I think, were a little too graphic, so we negotiated right up to the line on what everybody could be okay with.

When it came to watching the footage and shaping it into a documentary, what was that process like for you?

It was hard—I cried a lot. It’s still hard. It is really hard for me to live in this space. It is not an easy space to live in every single day and to talk about and regurgitate every single day. It’s one of those things that you really just want to get through and have it go away, but that doesn’t serve anyone. It doesn’t help anyone not to tell our truth and not to do something when we have the power and the platform to do something.

Are there any moments from screenings you’re particularly proud of?

At Sundance, at the first screening, my very dear friend Cynthia Lopez had a little handheld camera and unbeknownst to me, went outside and captured some beautiful testimonials: a mother and a daughter who were crying and talking about cancer; a man who had lost his wife. We got four or five really intense interviews with people who have gone through it. And every time the film is screened and every time someone watches it, my emails are flooded. Girls who are 29 saying, “My best friend died of cancer when we were 24, and I’ve been terrorized ever since. I’ve never gone in to get my screening, and I’m finally going to go now because of you." That’s what you want. The impact that Katie Couric had on getting colonoscopies is the impact that I am desperate to have on behalf of early screenings and cancer. It’s imperative. Almost 1,700 people every day die [from cancer] in the United States. Every day. What do those faces look like? What are those families going through? It’s not okay. We can catch it, and we can save their lives.

Do you have any plans for future documentaries?

Kathy [Bates, an executive producer on RX: Early Detection] wants to make one about lymphedema, and I’d like to see her get to do that. One of the things that you realize is what a beautiful, well-intentioned group of people documentarians are. They’re changing the world, they are educating the world, they are documenting history for the world, and the reality of reality without it being a reality show. Kathy and I have just fallen love with the genre, and even though we’re new to it, everybody has been so nice and open-armed and welcoming and gracious with both of us. I feel appreciated, and I feel respected, and I feel loved in this community, and it’s wonderful.

I’d like to do a documentary about the process of leaving life, and what that looks like and what happens, because I think one of the powers of this platform is that you have an opportunity to lighten someone’s heart and to give them solace. And I love the short form. I know people diminish short-form docs, but I like the genre. I like the genre because of who it reaches—it reaches everyone. So for me, I think that the power of the future is in short form, and I’m honored to be part of it.

END_OF_DOCUMENT_TOKEN_TO_BE_REPLACED

Vital Signs in Vérité: 'A Lion in the House' Confronts Childhood Cancer

Meet the Artistic Team behind 'Cancer: The Emperor of All Maladies'

Life's Too Short: Mariam Jobrani's Journey with Cancer in 'Everything Must Change'