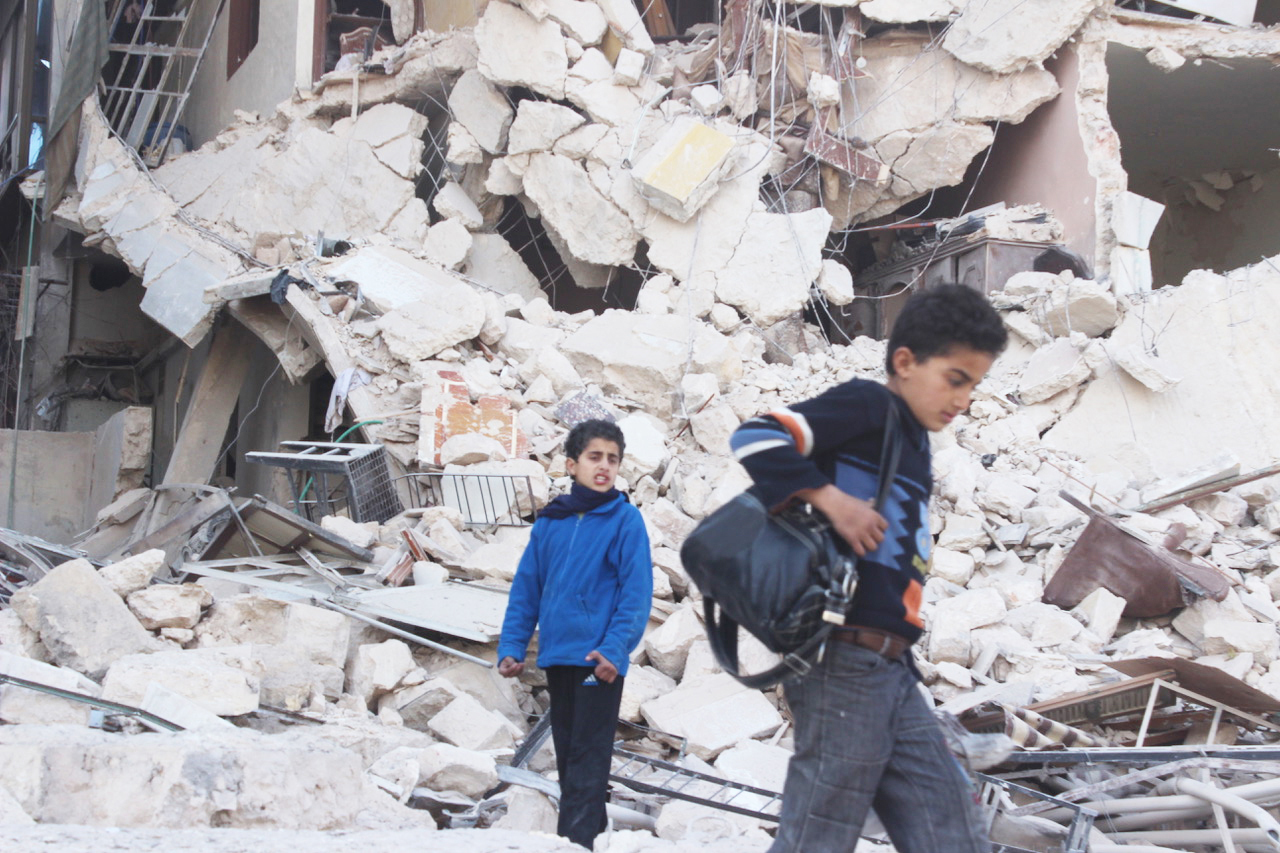 The opening of Evgeny Afineevsky's Cries from Syria calls to mind a small, sad poem by the late Bill Knott:

It is a heartfelt poem, one that speaks to the futility one feels when confronted with death, especially one so premature. It also speaks to the interior world of the imagination and the different ways that children and adults confront life's most basic and unavoidable transition. It would be much easier to write about Cries from Syria with this poetic filter in place, but as Afineevsky's latest documentary opens, there are no graves to speak of. As we listen to a refugee's traumatic story about watching his wife and child drown somewhere off the coast of Turkey, we see the body of three-year-old, Alan Kurdi, lying face down at the water's edge, while the surf gently rocks his lifeless body. It is a chilling image, one that is difficult to process, let alone accept, and it is a reminder that nothing in most of our lives has yet to be this brutal, this unforgiving, this sad.

"I think it is important to see [the Syrian refugee situation] without any sugar-coating, to show it as it is," Afineevsky explains. "And I think for us Americans, this movie can be a reminder that at some point, our founding fathers were fighting for these same freedoms, for freedom of speech or democracy. At the same time, we need to stop taking things for granted and appreciate what we have. We need to cherish these values because it's very easy to lose these values. To gain them back is very tough. And this is a great example: The people of Syria were living in a dictatorship for 40 years, and they're still fighting for these values and their dignity. At the same time, in the current climate of the entire world, it's very important to know it can happen anywhere. So, we need to learn from these mistakes. We need to learn how to respect our neighbors. We need to learn how to be compassionate and respectful, and cherish what we have."

Afineevsky is a filmmaker who does not shrink from difficult issues. His previous documentary, Winter on Fire, documents 93 days of the revolution in the Ukraine, following the civil unrest of yet another nation of people pushing back against oppression. To an outsider, both films may seem similar in content and construction, a perception that Afineevsky finds perplexing. Unlike the six years' worth of interviews and footage gradually acquired from Syrian citizens documenting atrocities on their cellphones, the director's previous film bears witness - boots on the ground - as the events of the Ukrainian uprising are unfolding.

"I can't say that it's a similar approach because one documents history on the go, and with the other I was reconstructing the history," Afineevsky maintains. "It's a completely different language, as opposed to something that relates to my background because I was born in Russia. Cries from Syria was an unfamiliar setting, and not in one place. It was almost all across the European Union, the Middle East, all around. And the reconstruction of six years of history that is still continuous, versus 93 days - this is a completely different thing. Of course, I can always say that Winter on Fire helped me to be prepared for my next film, but I think for every filmmaker, each movie prepares him or her for the next one, and we're learning from the previous experience. It doesn't matter if you're five years in the industry, 10 years or 50 years. It's always a learning process.

"So, I think it's hard to compare them," Afineevsky continues. "They're both revolutions, but at the same time, this one is not only the revolution; this one is a revolution that became a civil war and later, because of the intervention, became an even more horrifying situation and then became the war of our time."

Afineevsky has made it his mission to educate people and make them aware of the atrocities occurring under the rule of Bashar al-Assad and the Ba'ath Party. To accomplish this exchange of information, Afineevsky focuses on "the revolutionary icons and the kids, because they're the essential element of this revolution. I think it's important to emphasize that the Syrian people have lived under dictatorship for 40 years, but specifically in 2011, the regime began openly torturing children. And this was the final straw that brought Syrians to the streets, and the revolution began. No matter what you feel about the political situation in Syria, no one can deny that the suffering of these children is inhuman. The lost generation of the Syrian kids needed to be shown. And here, I have a specific approach because I wanted to hear their innocent voices, the voices of people who are just born and are already stepping into the grown-up life of the war, of the harsh reality. And at the same time, I'm trying to show that these people have hope."

It took time for Afineevsky and his fellow filmmakers to gain the trust of the Syrian people that they interviewed. But as they gradually gathered testimonies, word of mouth began to spread, helping the filmmakers to gain access to a range of Syrians, from the revolution's leaders and high-ranking army generals to ordinary citizens. Cries From Syria is comprised of these collective interviews and stories and the footage acquired from activists and citizen journalists.

"I'm trying to be there where people need you, to take their stories and deliver them to the world," Afineevsky explains. "But because all these kids were exposed to trauma, [the filmmaking process] required a completely different approach to gain their trust. You have to befriend them and make them comfortable to open their heart and soul to you. So, mentors like Jeremy Kagan, who was one of my teachers at USC and at the DGA, taught me about working with actors, which helped me because in this film I was building the same connection with the characters. And Mark Travis, another teacher at DGA, gave me another amazing lesson, and these key techniques helped to shape me both as a filmmaker and when I was filming in Maidan."

Syrian journalist/activist Kholoud Helmi plays a key role in the documentary by providing an insider's view to the events that sparked and followed the start of the revolution. Her lucid interpretation and reporting of events helps to dispel a fear of the refugees that seems to spin out from Western media.

"This fear comes from a lack of knowledge," Afineevsky explains. "When you don't know something, you fear it, but when you are clearly aware and understand these people, you want to see how you can help them to stop this war. And right now I have a great partner like HBO who can bring their stories to millions of viewers and help educate people."

After audiences' initial reactions of shock and outrage about the ongoing situation in Syria, the overall question that follows screenings of the film is, "How can we help?" The answers can be found at the film's website, CriesFromSyria.com, which contains links to the latest reports from Amnesty International and the ACLU, as well as contact information for different organizations where donations can be made to help the refugees.