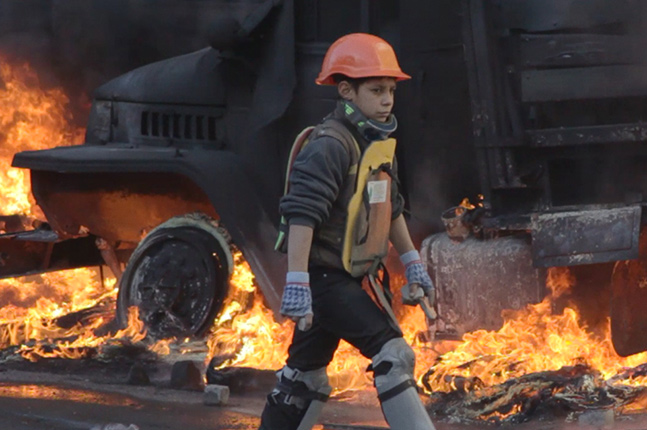 "We are standing here to prove that Ukraine is a European country."

Editor's note: Over the next few weeks, we at IDA will be introducing our community to the films that have been honored by the Academy of Motion Picture Arts and Sciences with an Oscar® nomination in the documentary category. You can see Winter on Fire on Saturday, February 27 at 10:30p at the Writers Guild of America Theater as part of DocuDay LA.

Over the course of just 93 days in 2014, what began as peaceful student demonstrations in Ukraine morphed into a violent revolution. Filmmaker Evgeny Afineevsky was on the frontlines of the uprising with his camera, and his documentation of these events became the Oscar-nominated film Winter on Fire.

On October 15, 2015, the IDA screened the film as part of the IDA Documentary Screening Series in Los Angeles. After the screening, Winter on Fire director Evgeny Afineevsky joined Steve Greene, special projects editor at Indiewire, to talk about the human stories that came out of Ukraine and what it was like to film during a revolution. You can watch clips from their conversation below.

Our thanks goes out to Indiewire, our official IDA Screening Series partner.

END_OF_DOCUMENT_TOKEN_TO_BE_REPLACED

WATCH: What Was It Like To Tour With Journey?

WATCH: How TIM'S VERMEER Filmmakers Determined a Runtime With 2400 Hours of Footage