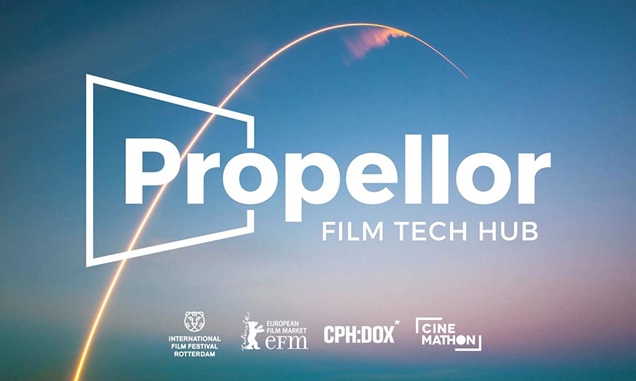 Launched at this year’s International Film Festival Rotterdam, the Propellor Film Tech Hub is an ambitious, country-spanning, joint initiative from the IFFR, the Berlinale’s European Film Market (EFM), the Copenhagen International Documentary Festival (CPH:DOX), and the "innovation studio" Cinemathon (based in Berlin). Basically, the idea behind Propellor is to transfer start-up world ideas to the film industry, upending cinema's barely functioning, stodgy old business models in the process.

To learn more, Documentary reached out to Cinemathon's Erwin Schmidt, one of the founders, who graciously demystified this newfangled tech enterprise prior to the CPH:DOX event.

How did the idea for Propellor Film Tech Hub originate?

Erwin Schmidt: Propellor was born from the desire to create a touch point between the film industry and the start-up and tech world, and to learn from them how to innovate and create new business models, using new strategies. There are many opportunities in the film industry to develop content, but there is not a single place or program dedicated to the development of new business models for production, distribution and experience of films. We want to fill this gap.

Yes, Propellor's mission is to develop "new business models for production, distribution and experience of films" - but what exactly does this mean in concrete terms? Can you give us an example of these new business models?

There are two elements crucial to our mission - technology as a driver of new business models, and the innovation strategies needed to develop them. Big data, artificial intelligence, blockchain, the sharing economy, co-creation - these are more than buzzwords. They are actually turning entire industries upside down!

With Propellor we want to create an environment where people can experiment and rethink the current models, which have not changed much since the digital revolution started. Despite the fact that digital technologies have in a way democratized the making of films, the distribution system has remained fairly unchanged. Among the participants in the program, we see a lot of interest in new forms of audience engagement, in building new communities, in connecting filmmakers and audiences in unprecedented ways, in using data to streamline inefficient processes. There is a lot of concern about films being made but not available to the audience, and thus not seen. We are convinced that technology and innovation strategies can help to tackle these major questions.

You've already launched Propellor | Kickstart at Rotterdam and Propellor | Speednic at Berlin, festivals that host both fiction and nonfiction films, so I'm wondering what’s in store for Propellor | Springboard at CPH:DOX. Does doc development pose a specific set of challenges?

Documentaries certainly have different challenges than fiction films, but the business ideas developed at the Propellor | Springboard in Copenhagen are mostly agnostic to this difference - and we welcome this very much. Ideally, a business idea would work for both fiction and documentary.

Who are some of the mentors participating at these ideation events? Are they all from the startup world?

We have invited 12 mentors to work with the participants of the Propellor | Springboard. Most of the mentors have a background in the start-up and tech world, and quite a few already had touch points with the film industry in the past. While they understand the challenges of this particular industry, they have a healthy distance and a fresh look. We want to bring in new perspectives, unbiased by the do's and don'ts of the film industry. But of course we also have mentors with a solid background in production, distribution or financing.

Finally, what's in store for Propellor's future? Do you plan to take these nomadic events global? And where will Propellor | Incubator be based?

We have a series of events coming up in Berlin in the summer and fall later this year, and will start a new cycle of events early next year. At the moment we have no plans to extend the Propellor activities beyond Berlin, Rotterdam and Copenhagen, since we already attract quite an international group of participants. But this might change in the future. The first edition of the Incubator in summer 2018 will be based in Berlin.