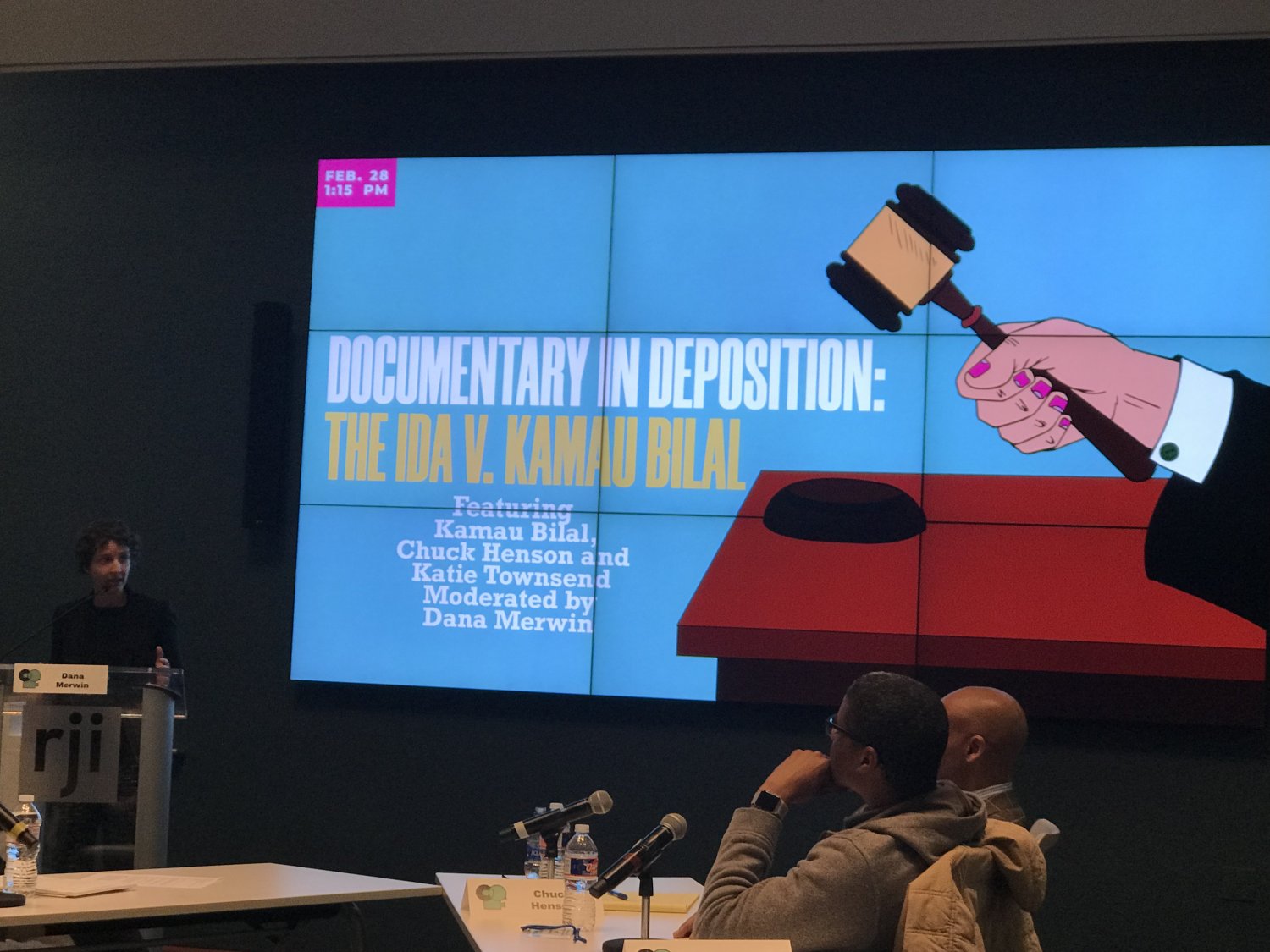 One problem with speaking truth to power is that sometimes, the powerful don’t like it. Although filmmakers can significantly reduce the likelihood of being sued, they can never entirely eliminate the risk.

Identifying and mitigating risk was the focus of “Documentary in Deposition: The IDA v. Kamau Bilal,” held on February 28 during the Based On A True Story conference at the Missouri School of Journalism. The three-day conference explores the intersections of film and journalism. “Our goal is to make journalists better filmmakers and filmmakers better journalists,” said Carrie Lozano, director of IDA Enterprise Documentary Fund.  “Even if you are a documentary filmmaker, there are a lot of journalistic practices that are valuable to you.”

Dana Merwin, program officer at IDA, moderated the session, which featured a mock deposition. The premise was that Bilal, an independent filmmaker, produced a documentary that featured an interview with Simon Kilmurry, executive director of the IDA. During post-production, Bilal decided to change the film into a satire that damaged the reputation of the IDA.

Kilmurry filed a (fictitious) lawsuit against Bilal, who was deposed by Katie Townsend, legal director of the Reporters Committee for Freedom of the Press in Washington, DC. Chuck Henson, trial practice professor of law at the University of Missouri, represented Bilal. “The underlying assumption is that the IDA filed a complaint against Kamau for defamation, false light and reputational harm to the organization,” Townsend explained.

The purpose of the mock deposition was to demonstrate what filmmakers might expect to happen in a deposition but more importantly, to think about practices that would make reaching that point highly unlikely. “Just because a complaint is filed against you based on your work, it doesn’t mean that you will be deposed,” Townsend maintained. “A lot has to happen before you are in this position. Depositions are part of the civil discovery process. Once a complaint is filed, there are a number of mechanisms under both state and federal law to try to get rid of those lawsuits in an early stage. If you are able to do that, you will never be in the hot seat. That’s what people who defend journalists and documentary filmmakers try to do—get rid of those lawsuits.”

If that doesn’t happen, however, the case can proceed to a deposition. By that point, attorneys for both the plaintiff and defendant have done extensive preparation.

“It may seem like a complete guessing game, but once you get into a deposition, it usually isn’t,” Townsend explained. “I know a lot about what the arguments are going to be on the other side. Not only do the parties know a lot about what the legal arguments are, they have a lot of factual information. Generally what happens is the parties exchange documents, and they also may exchange written questions and answers through interrogatories. They get a lot of insight into the factual background.

“The scope of relevance for discovery purposes is very broad,” Townsend continued. “Some people like to say discovery is a fishing expedition—and that’s exactly what it is.”

An actual deposition would drill much deeper than The IDA v. Kamau Bilal. Anything and everything related to the film in question is fair game for the plaintiff. “In real life, there would be a lot more documents and a lot more clips,” Townsend maintained. “Whenever you look at a work, you want to look at the entire context. In fact, the law requires the court to evaluate the work as a whole. We would have emails, which sometimes are the worst thing in the world for a defendant. Especially in the context of investigative work, journalists tend to get highly invested, and rightfully so. It’s easy to become critical of government officials or companies or things you are working on, in a very flip way, and you never think those things may come back to haunt you.”

Chuck Henson agreed. “As part of the background information, how was the film made? Who was there? How many people did you talk to? I need to see all of your emails. I want your call logs. I want your cellphone records. Do you Instagram? Do you tweet? I want all of that so I know exactly who knows what. Then we would spend at least a day, probably more, practicing for the deposition. So when the questions get asked, the answers are ready to go—not that your lawyer is telling you what the answers are.”

After the deposition, either attorney can make a motion for summary judgment, in which a request is made to settle the case without going to a jury trial. However, it is much more likely that the case will proceed to trial, Townsend noted.

The mock deposition raised two important questions for filmmakers: How significant is the risk of being sued, and what practical steps can they take to mitigate that risk?

“Often the people who get upset and want to sue you are some minor mention or some minor character, because they had a completely different understanding of how they were going to be portrayed,” Townsend said. “You have a situation where a source says, `I didn’t think that was how I was going to be portrayed.’ Whether you led them to believe that or not, they were surprised, and not in a good way.”

Lawsuits often come from where they are least expected. “You generally are ready for the people whom you expect to sue you,” Lozano noted. “It doesn’t mean it won’t happen, but you can feel pretty confident. Sometimes they come completely out of left field. They may be so minor that that’s how you miss them.”

Again, it is impossible to eliminate all risk. “You can have a 100 percent airtight story or film but that doesn’t mean you’re not going to get sued,” Townsend pointed out. “If some crazy person wants to sue you, they may do it, even if they know they are going to lose. Maybe they are angry, upset or have millions of dollars and don’t care.”

As the old adage goes, the best defense is a good offense. Filmmakers should anticipate and prepare for potential pitfalls before they ever turn on the camera. Presenters offered several practical steps.

Although the risk of legal action is real, it also is far from common. There also is a gulf between being sued and being sued successfully. Townsend encourages filmmakers to never allow the fear of a lawsuit to stop them from asking hard questions and making great films. “The point is not to scare anyone into not doing courageous stories. The purpose is to get you thinking about these types of things and underscoring the importance of doing fact-checking, keeping all of your records and research organized, and doing due diligence so you are prepared.

“Our goal is to help you understand risks, minimize risks where we can and minimize the risk that you can be sued successfully,” Townsend concluded. “You shouldn’t be intimidated by the specter of a possible lawsuit. You can never eliminate the risk of being sued, but you can minimize it.” 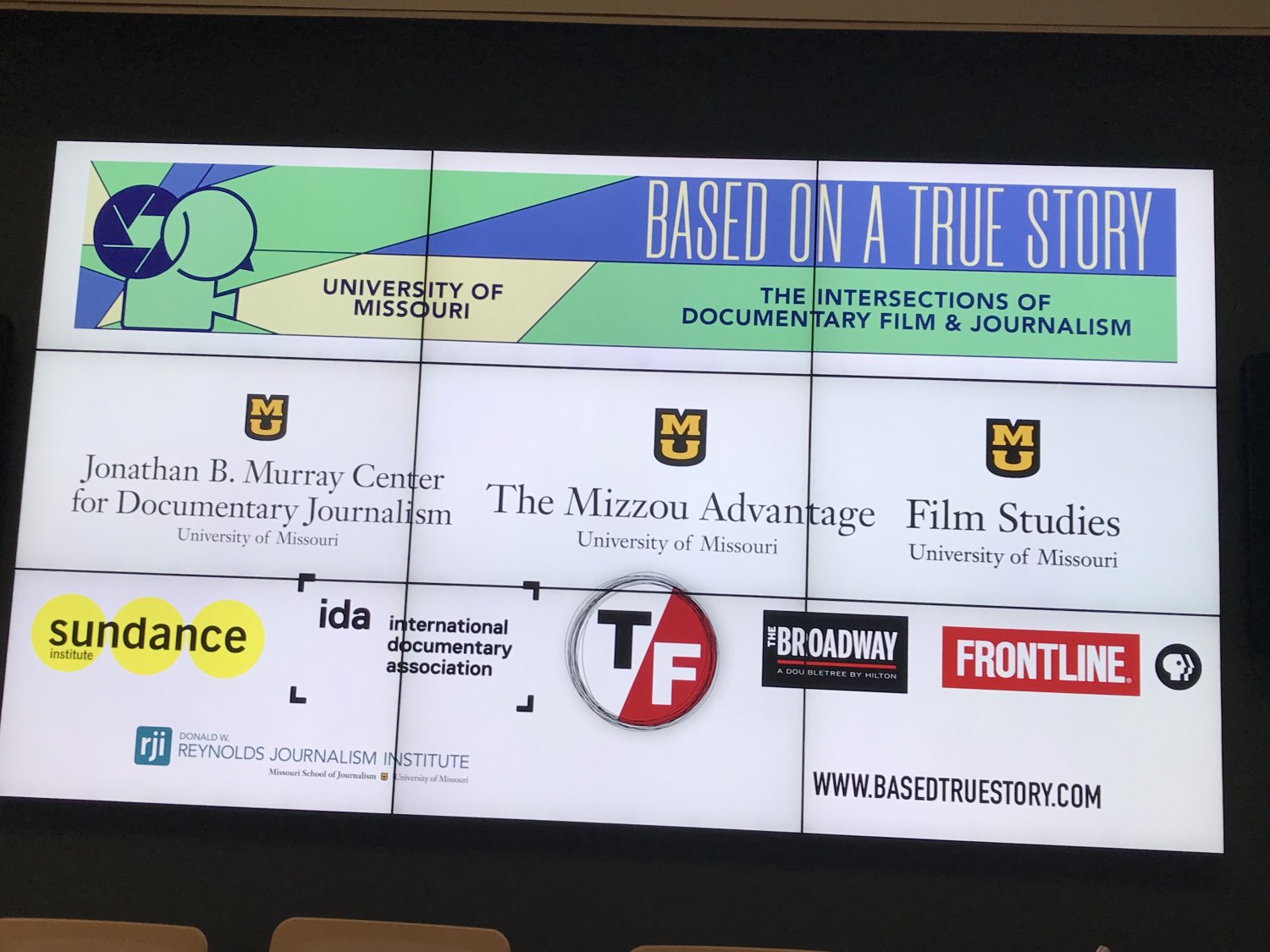 Elsewhere at BOATS: “What Nonfiction Writers Can Teach Documentary Filmmakers”

The more the line between journalism and nonfiction film becomes blurred, the more filmmakers and journalists can learn from each other. “Independent filmmaking pushes boundaries, as it should,” said Tom Jennings, who teaches both filmmaking and investigative reporting at New York University. “The challenge I put to film students is to not necessarily be dogmatic about journalistic rules but to let them know there are certain boundaries that do exist and that they are there for a reason. Likewise, in the journalism department, there are a lot of constraints that are put on them because of notions of objectivity. There is a necessary conversation we need to have about what is truth and what is objectivity.”

The conference opened with a screening of The Feeling of Being Watched, from Algerian-American filmmaker Assia Boundaoui. The film, which received funding from IDA’s Enterprise Documentary Fund, delves into government’s counterterrorism surveillance of her Chicago community and how it affected her and her family. She discussed her experiences in the next session, "What Nonfiction Writers Can Teach Documentary Filmmakers." One major challenge was obtaining 33,000 pages of documents under the Freedom of Information Act. “It was a two-year-long legal process to get the records,” Boundaoui recalled. “It’s amazing. There are so many tools for documentary filmmakers, as well as lawyers who are keen on helping filmmakers get to this point. You need litigation to get your hands on the records.”

Jennings, reporter May Jeong and reporter Joaquin Sapien also shared their insights. “Filmmakers are deathly afraid of documents,” Jennings noted. “One of the differences between independent documentary filmmaking and journalistic documentary filmmaking is to go deep into sourcing, whether it’s with documents or with individuals, and really finding hard-to-get sources. In a nutshell, you do it with chronologies. One of the best things you can possibly do is embrace chronologies. That’s the foundation of a solid investigative research project.”

Another challenge is how best to present documents in a film. Jennings and Sapiens relied heavily on documents for their film The Right to Fail. “Gathering a bunch of documents is what I do as a print journalist,” Sapien asserted. “It’s part of the routine. I thought, What could be more boring to the viewer than watching me scan documents? A way we made it work is that we were very selective about what we used in graphic representations, and these documents listed caregivers who had worked with these subjects whom we would look up and try to go talk to them.”

Panelists also discussed whether objectivity is desirable—or even possible. “I don’t believe in objectivity; I believe in transparency,” Boundaoui asserted. “When you are talking about what your position is and what your process is, you’re being transparent. It’s particularly difficult in film, because we don’t have footnotes. It also applies not just to the process but the edit, the funding, the team. In a written piece, you have an opportunity to cite your sources. In film, it’s really different.” Jeong agreed. “The fact that I am covering a subject in itself means I am partial to that subject; objectivity is not a reasonable goal.”

“Room with a View(point)” raised a provocative question: Is cinema a dead language, an art that is already in the process of decline? Wim Wenders first posed that question in his 1982 film Room 666. He invited such noted filmmakers as Werner Herzog, Michelangelo Antonioni and Steven Spielberg to answer that question alone in front of a camera in a hotel room. Film journalist Eric Hynes and filmmakers Jeff Reichert and Damon Smith continue the project in their film Room H.264.

“It’s become an iterative thing that has become its own time capsule,” Hynes said. “The Wenders film is a time capsule for 1982. He is talking about what the technology might be, what our economies might be, how we might think about cinema. Our version is becoming that but many times over.

Several filmmakers were asked to share their answers during True/False Film Fest, with the film to be shown at the end of the festival. “When you are staring down a lens and there is no one to converse with, it becomes a different type of experience for the person who has agreed to go into the room and have a session,” Smith noted. “We are trying to create a conversation that doesn’t happen in real time or in any particular space.”

Alan Goforth is a freelance journalist, author and aspiring screenwriter in Lee's Summit, MO. He is a graduate of the University of Missouri School of Journalism.