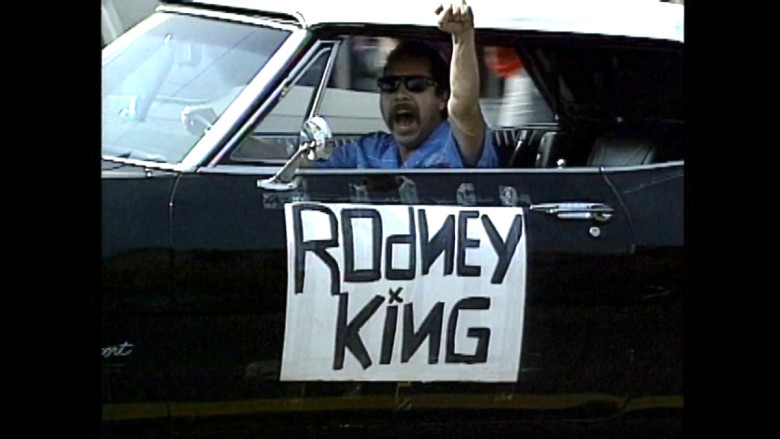 Indiewire rounds up a group of new documentaries that reflect upon the 1992 L.A. Uprising.

It's 25 years later, and Los Angeles – and the LAPD – have changed. But has the rest of the country? Regular reports of police brutality, now well-documented in an age of phone cameras, make it clear that we haven't come all that far. Several new documentaries explore the L.A. riots, including the underlying reasons, the actual events, what happened next, and how it relates to today. Among the filmmakers putting their own stamp on the story: John Ridley, John Singleton, Sacha Jenkins, Dan Lindsay, and TJ Martin. All are powerful and well done, but some manage to better encapsulate why it's important that we study, and learn from, what happened on April 29, 1992.

At The New Republic, Josephine Livingstone considers how video shaped our understanding of the Rodney King beating and the subsequent unrest.

King's beating in real life was one thing, and on screen it was another. This is not to trivialize or make secondary his suffering: It was gratuitous and racist with a crude obviousness that is rarely legible in the racist scandals of our own moment. (LA 92 makes a point of featuring the tapes of cops radioing each other, referring to King as a "lizard," talking about "gorillas in the mist.") But when George Holliday videotaped the police beating Rodney King, he jammed the clockwork of history to a stop.

At The New York Times, an obituary for Jonathan Demme, who, among his many accomplishments, reinvented the concert film.

"Jonathan Demme is the American cinema’s king of amusing artifacts: blinding bric-a-brac, the junkiest of jewelry, costumes so frightening they take your breath away," Ms. Maslin wrote. "Mr. Demme may joke, but he's also capable of suggesting that the very fabric of American life may be woven of such things, and that it takes a merry and adventurous spirit to make the most of them."

At CBS Sunday Morning, Lesley Stahl sits down with the "queen of documentary," Sheila Nevins of HBO Documentary Films.

In the land of documentaries, one woman rules: Sheila Nevins, who for more than three decades has been in charge of documentaries for HBO. She has overseen hundreds of films that have shined a bright light on everything from war zones (Cries from Syria) to Scientology (Going Clear), from the environment (Gasland) to Alzheimer's (The Alzheimer's Project). She's been recognized for her work with enough awards to fill a room. And at the age of 78, she's still in the screening room most days, fully engaged.

At The Globe and Mail, Kate Taylor reports from Hot Docs on the "problematic" genre of female biography.

This year's Hot Docs festival is packed with biographies of remarkable women, films animated by stories of people whose career paths were blocked by sexism and misogyny. But these are also films that have to take note of tough personal compromises that hurt other people badly. Hot Docs 2017 reveals how problematic female biography can be.

When I saw Barbara Kopple's film on coal miners (Harlan County USA), I thought, "Holy shit! A documentary doesn't have only to be a news story!" My background was totally theater; I got my masters in directing at Yale, and I had majored in English at Barnard. I had no interest in documentaries or in TV. I was an off-Broadway person looking to be a director. I had fallen in love with these films that I knew were out there, but I didn't see my connection to them.