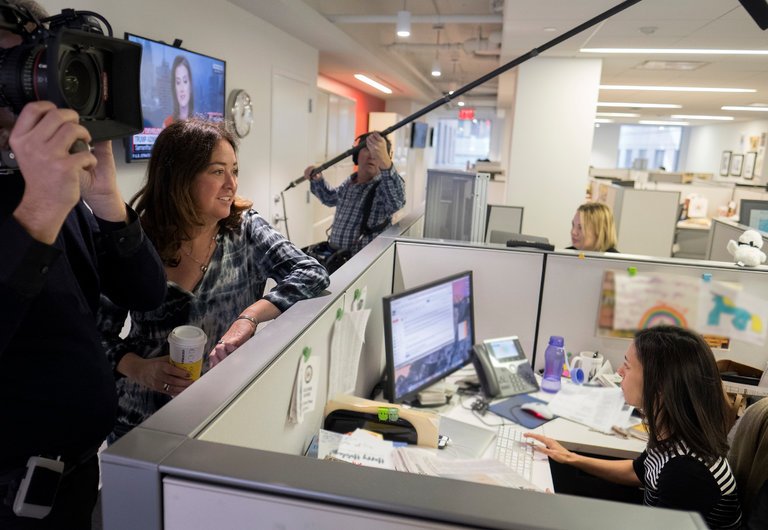 At The New York Times, Liz Garbus shares the story behind her upcoming Times-centered doc The Fourth Estate.

Still, why did The Times open itself to anyone in such a way? There were so many reasons for it not to. It might be that the organization's leaders understood that at a time when journalism was under attack from the highest powers in the land, it might not be a bad idea to show the public exactly what it is that real journalists actually do. I am excited to invite the world in to see what I saw, to be that fly on the wall along with me during this most extraordinary year.

At CNet, Marguerite Reardon outlines the current state of the battle over net neutrality.

The Obama-era net neutrality rules, passed in 2015, are pretty much dead. As of Monday, some of the proposals regarding the Republican-led FCC's oversight of the internet, known as "Restoring Internet Freedom," will go into effect. Because this is Washington, DC, and nothing is simple, key parts of the proposal, which include the changes to net neutrality, don't go into effect until a vote by the Office of Management and Budget. The OMB wasn't available to comment on when the vote would take place. But this is just a procedural step. The net neutrality rules as we knew them will be no more.

At Wolf Berlin, filmmaker Peter Watkins offers Part I of his statement on a "global media crisis."

In the mid-1970s, during summer courses at Columbia University in New York City, a group of students and I studied and specified the characteristics of this uniform and repetitive language form which frames almost the entire output of the MAVM. We called it the Monoform. With few exceptions, the Hollywood Monoform has been adopted by virtually all creators of commercial films, most documentary films, and by all aspects of television production including news broadcasting. This global adoption of one language form - in effect a standardisation of the mass audiovisual media – is a central issue of the media crisis. It means, for example, that a documentary film can basically have much the same form and narrative structure as a Netflix drama series.

At IndieWire, Anne Thompson reports from CinemaCon on the digital disruptors that could save the theater business.

Clearly, theaters are struggling to be as good as these video platforms at connecting cinemas with audiences. While MoviePass may not survive its bold but financially fragile business model, it took this disruptor to shake up the industry and show them not only what a millennial-friendly subscription movie service could look like, signing up over 2 million customers, but how to collect data on their customers. Five years ago, this was a foreign concept. Now it’s a necessity.

"This film is like coming full circle for me," Amend said. Feminists: What Were They Thinking? revisits many of the women in the book — to check in on the arc of their lives and to connect to the new wave of feminism. "When I look at the book, it's like going to a movie. I remember the work itself and meeting the women," Demetrakas said. "At the time, feminism was just blooming so much, and our lives were blooming, so when I look at the book, I feel that energy."

It took about six months of discussions with the editors for Rossi to ultimately gain access to the building, no holds barred. By explaining his process--relative "fly-on-the-wall" journalism coupled with analytical sit-down interviews with those outside the walls of the Times building--Rossi convinced editors that his concept for the film was not bolstered by any sort of agenda, or even any expectations. "I was able to explain the way I wanted to make the film, and people basically felt comfortable participating," he says.

END_OF_DOCUMENT_TOKEN_TO_BE_REPLACED

A Cut Above: Kate Amend on the Creative Contributions of Documentary Editors