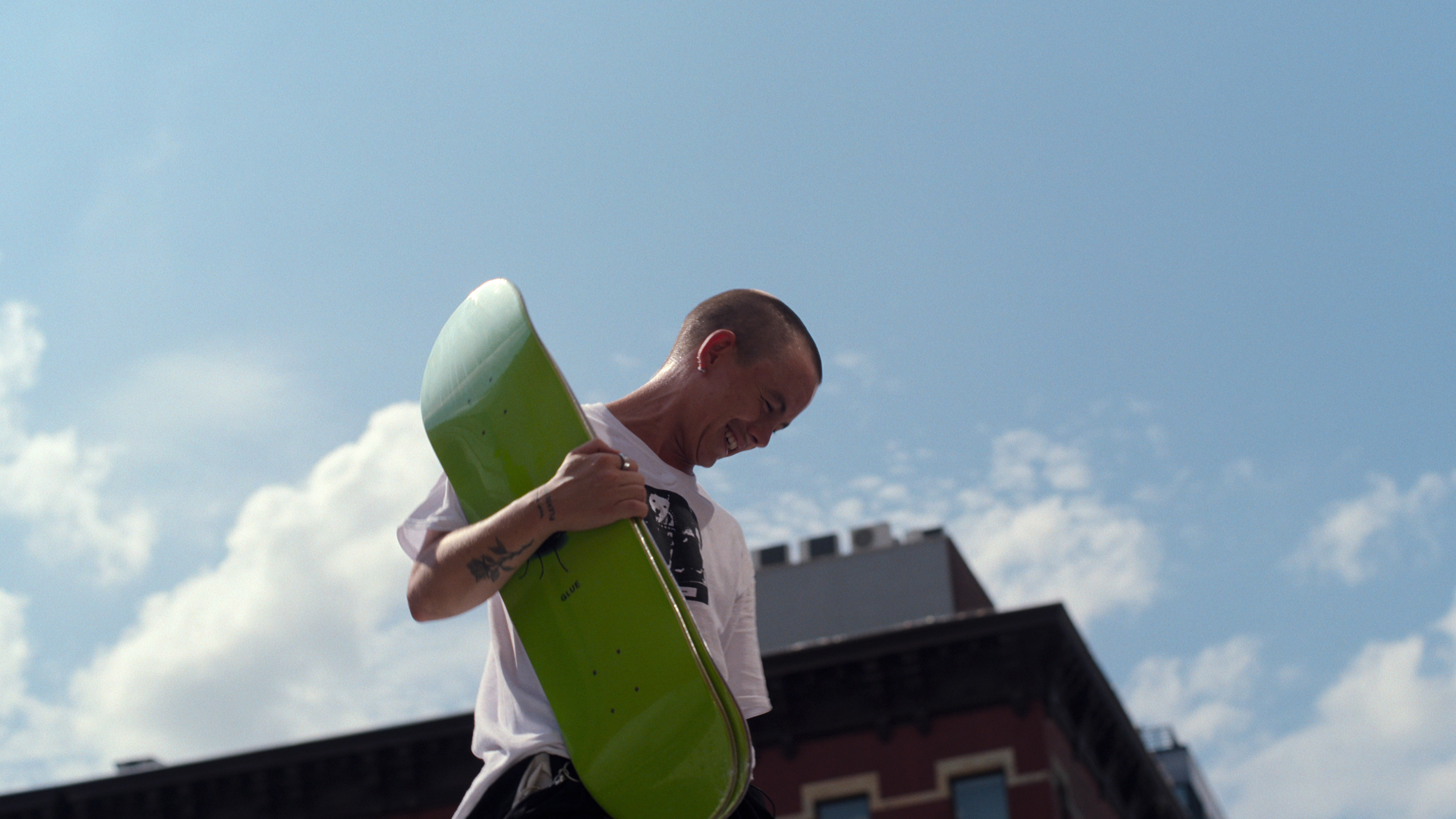 A conversation between IndieWire’s Eric Kohn and Free Chol Soo Lee producer Su Kim discusses how the media market limits the drive for content creation in documentary filmmaking and how her work aims to counter limits.

Kim’s producing career over the past decade coincided with the explosion of the documentary filmmaking market stimulated by the streaming market. Yet even as tentpole documentaries on J. Lo, Tiger King, and The Tinder Swindler have stimulated more interest in the form, Kim said this trend has created a greater challenge for the work she seeks to produce.

“People say it’s a golden age of documentaries, but I wonder if that’s a crisis,” she said. “There’s a shrinking space for the kind of content I’m trying to put into the world.”

From LGBTQ Nation, Nic Austin interviews Leo Baker, a professional skateboarder who is trans and the subject of Nicola Marsh and Giovanni Reda’s Stay On Board: The Leo Baker Story, about the experience of being filmed during a vulnerable time.

A lot of stuff came to the surface while making this documentary and I’ve given interviews on being marginalized in the skating world and I’ve learned a lot about myself during the experience. It’s less about learning about who I am now but just embracing who I am without questioning it. I’m tired of talking about it all and I’m ready to just be. I’m tired of fixed identities informing my decisions.

I’ve been on a simple wavelength of listening to oneself. My main takeaway is for people to listen to children. I want people to listen to what children want, and what they are saying. If this documentary provides a spotlight on what’s happening to trans kids across our country, then I’ll be happy.

Over at Collider, Douglas Laman addresses the tension between documentary and feature films covering the same subject and suggests the need for both.

The bar is high for narrative movies to justify their existence when they explore a topic already detailed by a documentary feature. Frankly, it should be. Often the existence of these titles feels like a refute to documentaries as an art form as if producers and studio executives can’t imagine general audiences caring about a story unless it features familiar movie and TV stars. That’s not to say every one of these narrative films is made with this mindset. It’s just that pop culture’s longstanding (and only recently changing, albeit slightly) dismissal of documentaries as an art form makes the existence of something like Thirteen Lives extra suspicious.

A similar article discussing duplicates, but solely in the documentary realm, comes from Brigid Delaney at The Guardian, who discusses how wider accessibility to archival footage fuels copies.

Film geeks will sometimes amuse themselves and each other by rattling off instances of competing films, coincidences (or quirks of industry trend-chasing) that result in two films with approximately similar plots rolling out around the same time: A Bug’s Life and Antz, Armageddon and Deep Impact, Portrait of a Lady on Fire and Ammonite. Though as of late, far more redundancies along these lines concern the nonfiction side of the film world, and they seldom have that whimsical sense of happenstance in their overlap.

Over the past couple of years, there’s been a preponderance of twinned documentaries offering alternate angles on the same subject, an odd spike motivated by the tricky logistics of archival film-making. As the range of the past documented in moving pictures continues to expand, documentaries hinging on exhumed private footage and reels found somewhere in a vault have multiplied, in some cases leading to crowding. And though the offscreen rationales for doubled projects often pertain to matters of licensing and legality, the questions they raise about artistic perspective and blinkered vantage points can be illuminating all on their own.

Another article from Collider comes from Samantha Coley, who shares a conversation with producers of Shudder’s Queer for Fear, a new docuseries about the longstanding ingraining of LGBTQ+ culture in the horror genre, on the connection between the two.

It's a completely queer experience of being able to move through gender and through sexual preference. And then I have to throw in Mary Shelley's Frankenstein. I am the monster, but it's a beautiful monster and a vulnerable monster too, a monster that really wants to be loved. And I really believe that. I'm so proud of these guys because they've worked so hard to bring so many voices into the discussion that we've never heard before, that really is bringing to life why we are in love with these movies and what they mean to us.

Teresa Vena from Cineuropa speaks with Nikolaus Geyrhalter, director of Matter Out of Place, about the process of filming his ten-part study on waste, which Vena describes as “melancholic and fascinating.”

There is an aesthetic of the ugly. In all that is ugly lies beauty. The film plays with this. The places we see are fascinating. But we can't stop to look at just the surface. We have to go further. Everything we produce or use ends up being trash at some point. Once we throw it away, it's not gone. The process starts just then. A big industry is behind it and a huge amount of people are concerned about it. In Europe, we have a relatively good way to cope with trash by burning it and by gaining energy out of it. But still, it doesn't disappear completely either.

In Hyperallergic Andrew Northrop writes about how Ana Vaz’s É Noite Na América (It Is Night in America) shows the “shapeshifting relationship between urban sprawl and the natural world” by capturing the wildlife of Brazil on expired film, offering an alternative perspective on ‘America.’

Cinema has long imbued the night with a sense of mystique. In the time before the color film, celluloid was tinted blue to signal night scenes. This extended into the color age for decades, with filters and chemicals used as part of the day-for-night process, a way of forging a perfectly controlled nighttime. It Is Night in America points to this history in its opening sequence, a series of panning shots of Brasília’s skyline washed in a deep blue. As the shots build in speed alongside a soundscape that fuses the city noises and animal calls, the buildings blur, turning the city into a non-place. Here there is another alternate way of seeing, as the shots mimic disoriented bird flight.

It Is Night in America gives liminal forms the limelight they are usually not afforded. The title embodies this. The word “America” is too often associated with just the United States, overlooking the broader western hemisphere. There are alternate perspectives that offer ways of looking deeper.

From the Archive: Spring 2015 issue: When Wildlife Documentaries Harass: Ethics Required in Environmental Filmmaking Too

Before the screening, I had given a rousing speech to inspire the audience to support wolf conservation. After the film was over, I opened up the floor to questions from the audience. A mass of hands went up and I pointed to a preteen boy. “How did you film the mother wolf in its den?” he asked.

My heart sank. Answering truthfully meant betraying the trade secrets of wildlife filmmaking. I was not eager to reveal that the “den” in which the mother wolf suckled her newborn pups was an artificial set. Nor did I want to admit that we used captive wolves rented from a game farm for some of the scenes. If I exposed such secrets, people might feel cheated. By industry standards, we’d done nothing unethical. In fact, we’d made the ethical choice. Renting captive wolves allows filmmakers to avoid disturbing wild populations and potentially habituating them to human beings. Wild wolves would be deeply affected by prolonged and intrusive filming requirements.

But we’d deceived the audience all the same, and now the boy’s question put trust on the table. In that instant, I decided to come clean with an apology and an explanation: I owed my audience transparency, not duplicity. I explained that the wolves were captive and the den scenes staged—that as realistic as they were, they still weren’t the real thing.

Documentary Film Lovers, Here’s a New Theater Just for You

CNN to Premiere No Ordinary Life,  a Film About Women Photojournalists– Monday, Sept. 5 at 10 p.m. ET

END_OF_DOCUMENT_TOKEN_TO_BE_REPLACED

Reclaiming History in the Congo: Through Both Documentary and Feature