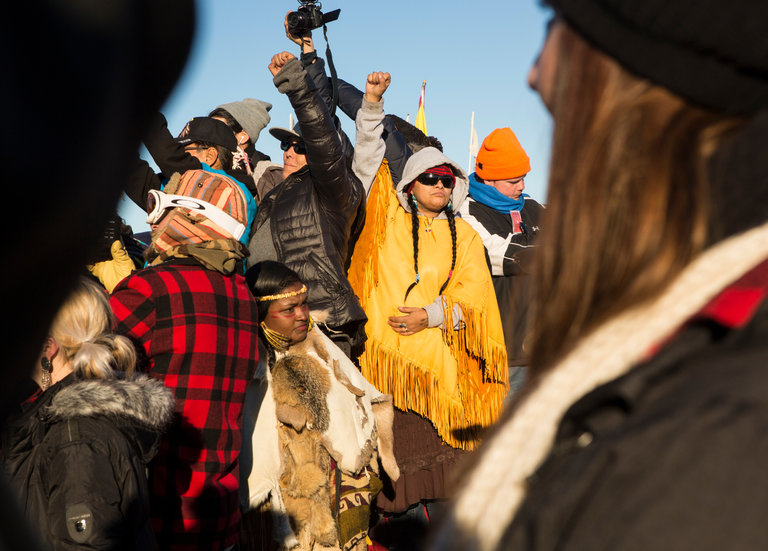 At Indiewire, five tips from a filmmaking community ready to stand up to Trump.

"This is not the time to compromise or shy away from the truths that we see, because there's going to be a lot of pressure to not tell those stories and to not get them on air," said filmmaker Dawn Porter, adding that in some southern U.S. states, PBS did not air her 2016 documentary Trapped, about regulations that restrict access to abortion in America. "I'm very concerned about public broadcasting. If PBS does not show Trapped under the Obama administration, tell me how we’re going to get a film critical of people who suppress race shown now."

At The New York Times, John Anderson reports on the debate about cultural appropriation among documentary makers at Standing Rock.

"We look at it with different responsibilities," she said. "One guy on our team overheard a nonnative filmmaker say, 'This is really going to make my career.' This is different from speaking to one's descendants and generations to come. We're speaking to something that echoes into the future."

The answer for journalism is not going to be found in chucking all the old notions or in clinging to them, but in a blend of embracing some revolutionary methods while keeping faith with some key fundamental principles. The following seven steps outline that path - one that will better serve the public in the new political, technology, and information era.

One of Attenborough's hallmarks is a refusal to look away from nature's inherent brutality. I'm not as outraged by this as some viewers are. I like to be reminded occasionally of what Joseph Campbell called the sorrow of realizing that life feeds on other life, that ours is an impermanent and fragile world, susceptible to unforeseeable and life-ending phenomena: an orca attack on a newborn seal; a fallen bough in the path of a caribou fleeing a grizzly; an asteroid hurtling toward the Yucatán; the ascension of a bipedal, storytelling mammal, armed with a ship-mounted harpoon and a Biblical mandate to dominate and subdue.

At Eater, Helen Rosner sits down for a wide-ranging post-election conversation with Anthony Bourdain.

"I’m really proud of the Madagascar show [which featured film director Darren Aronofsky as a traveling companion], because we showed the Aronofsky version at the end. We had this rather beautiful show made, with a nice, potentially heartwarming kind of conclusion, and instead I decided we should let Darren look back and see what we'd already visited, and exactly how ugly it was - and how unreliable the entire television process is. The camera's a liar. It only tells the story we want you to see."

But challenges remain, and Native Americans are still marginalized by a system of representation in which they have a relatively small power share. The handful of filmmakers that began the movement have not increased proportionally to the progression of their skill and legacy. Yet, with a history of artistry and activism rooted in documentary, Native filmmakers continue to redefine their present moment by drawing on both the narratives of their past and the visions they have of a different future.

END_OF_DOCUMENT_TOKEN_TO_BE_REPLACED

'The Seventh Fire' Explores Gang Life on the Reservation