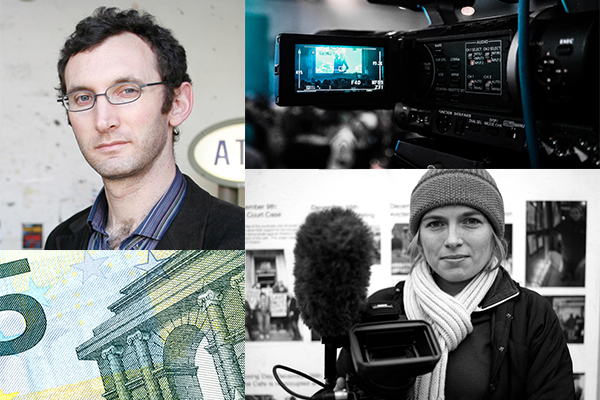 In advance of the IDA's Getting Real conference, Realscreen presents a special report on documentary financing and the economic pressures on filmmakers.

The democratization of technology and abundance of distribution platforms allows most anyone to make docs, but with so many opportunities and a saturated market, it also means more doc makers – even veterans of the field – are struggling to first get their films financed, and then make money and recoup debts incurred.

Part two of the Realscreen report considers new perspectives on sustainability and diversity.

Jackson advises that improving education around the cost of filmmaking, and what is okay to put into a budget, are steps in ensuring not only sustainability, but also diversity among filmmakers. "The voices we also need to hear from are the people who can’t even contemplate going into this work because it’s not sustainable, and they simply can’t shoulder the amount of debt that it might take to make their film with no expectation of getting any money back from it," she says.

The process of pitching one’s film can be exhilarating… and demoralizing. For many filmmakers, it’s the first opportunity they have to unveil their project to the general public. It’s a great time to test out their material, and maybe win over some funders and distributors. For many others, it is also their first brush with the harsh realities of the marketplace—a world that reduces their precious work to niche categories and unapologetically embraces the sexy and sensationalist.

The Guardian checks in with the kids of Jesus Camp, the controversial 2006 documentary about evangelical youth.

"Was it child abuse? Yes and no,” he said in a recent interview, about his time at Kids on Fire church camp. “I think they had the best of intentions, but I see it as sick people trying to treat sick people. It’s their coping mechanism for figuring out why we’re alive. I wouldn’t trade that experience for anything, though, because it allowed me at such a young age to question my existence."

At the Los Angeles Times, Rebecca Keegan reports on why completing a second movie is such a hurdle for women and minority filmmakers.

As studios have contracted their specialty divisions and shrunk their development deals, the opportunities to step up from a small first film to a moderately budgeted second one have gotten scarcer for all directors. That has implications not only for filmmakers but also for the studios seeking to broaden the pool of talent from which they hire. For Universal Pictures Chairman Donna Langley, whose studio is financing the FilmTwo Initiative, the hope is to nurture talent that might otherwise slip through the cracks.

At Indiewire, Sam Adams argues that movies need to be more conscientious about their depictions of violent encounters with law enforcement.

It’s fine to laugh at Jonah Hill getting shocked in the nuts as long as we remember that when the police do it in real life, it’s violence, and when agents of the federal government do it, it’s torture. But it’s also a safe bet that if Hollywood’s directing pool were more diverse, the way movies depict encounters with the police would be a lot more varied as well.

"Fundraising these days is tougher than ever; the competition is fierce and the funders are smart and savvy. There is not and never will be enough money out there for all the good projects. So settle in for the long haul and equip yourself for the realities. Describing all your good intentions and hard work is only the beginning. You need to create a pitch for your project that sounds exciting and relevant and reflects a thorough knowledge of both the subject and the audiences you are targeting."

Rene Bourdages Appointed to the Position of Director General, Creation and Innovation, at the National Film Board of Canada
read more

END_OF_DOCUMENT_TOKEN_TO_BE_REPLACED

Five for Filmmaking: A Quintet of Documentarians Discuss Career and Life Choices