Essential Doc Reads: Week of May 2 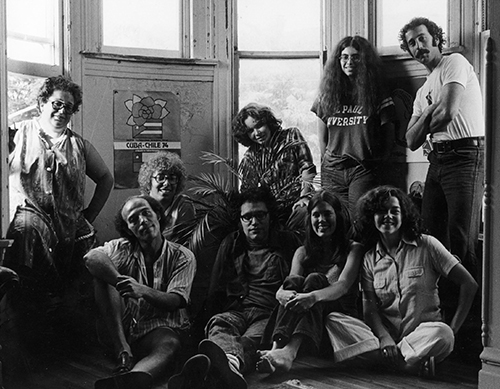 At The University of Chicago Magazine, Jason Kelly provides an in-depth overview of 50 years of Kartemquin Films.

Fifty years and more than 50 films generate a lot of history. In the offices, that history adorns walls, overflows shelves, and infuses conversations even as a new generation of filmmakers, staff, and interns expand Kartemquin’s filmography and build on its philosophy. Some are too young to remember the height of Hoop Dreams passion, let alone the group’s founding influences. But they carry on the founders’ passion for "sparking democracy through documentary."

In The Guardian, Nick Broomfield discusses how his love of architecture informed two new films about Liverpool and Cardiff.

"I’ve always been fascinated by buildings and history; it’s what I spend so much of my time doing anyway, so I might as well make films about it. When I travel I always make a point of finding out about the history of a place, its iconic buildings, knowing why it is the way it is. At the moment I am living in Los Angeles and it also has the most amazing history."

The world was changing and fast, a fact of which the 1960s Direct Cinema filmmakers were acutely aware, and sought to capture before the change was irrevocable. Even a work like À Saint-Henri le Cinq Septembre (September Five at Saint-Henri, 1962), comprising scenes taken around the rough, blue-collar precincts of Saint-Henri in Montréal in the course of a single day by a team of Direct Cinema luminaries including Brault and Jutra, today invites a measure of nostalgia for a bygone working-class culture.

At Movie Mezzanine, Jake Cole spotlights Sergio Oksman's On Football, an unorthodox Brazilian documentary about a father, a son, and the World Cup.

On Football’s format announces from the top that it is not a rigorous search for answers, but it’s remarkable how much is left unsaid by the film’s end. Neither a simple documentary nor a tidy narrative, Oksman’s movie comes across as a true, real-time attempt to connect with someone, and the only thing more upsetting than how many issues go unresolved is the realization that no method could have likely resolved them to the satisfaction of either party.

At The New York Times, Celestine Bohlem reports from Paris on the unlikely success of the documentary Demain.

The movie opened at a propitious moment, after a difficult year that included two terrorist attacks in Paris and a persistent economic crisis…The response has been enthusiastic and sustained: The film is playing in 122 French cinemas, for longer than some recent Hollywood blockbusters. Audiences have been known to stand up and applaud as the credits appear on the screen. Mr. Dion said some viewers have written to tell him that it changed their lives.

"But it's not just about the films with Quinn; it's about making a difference with the underserved communities in Chicago with programs like Diverse Voices in Docs and KTQ Labs. On a national scale, it's been about playing an integral role in developing best practices for fair use, in launching ITVS, and in forming the Indie Caucus to ensure diversity and independence in public television."