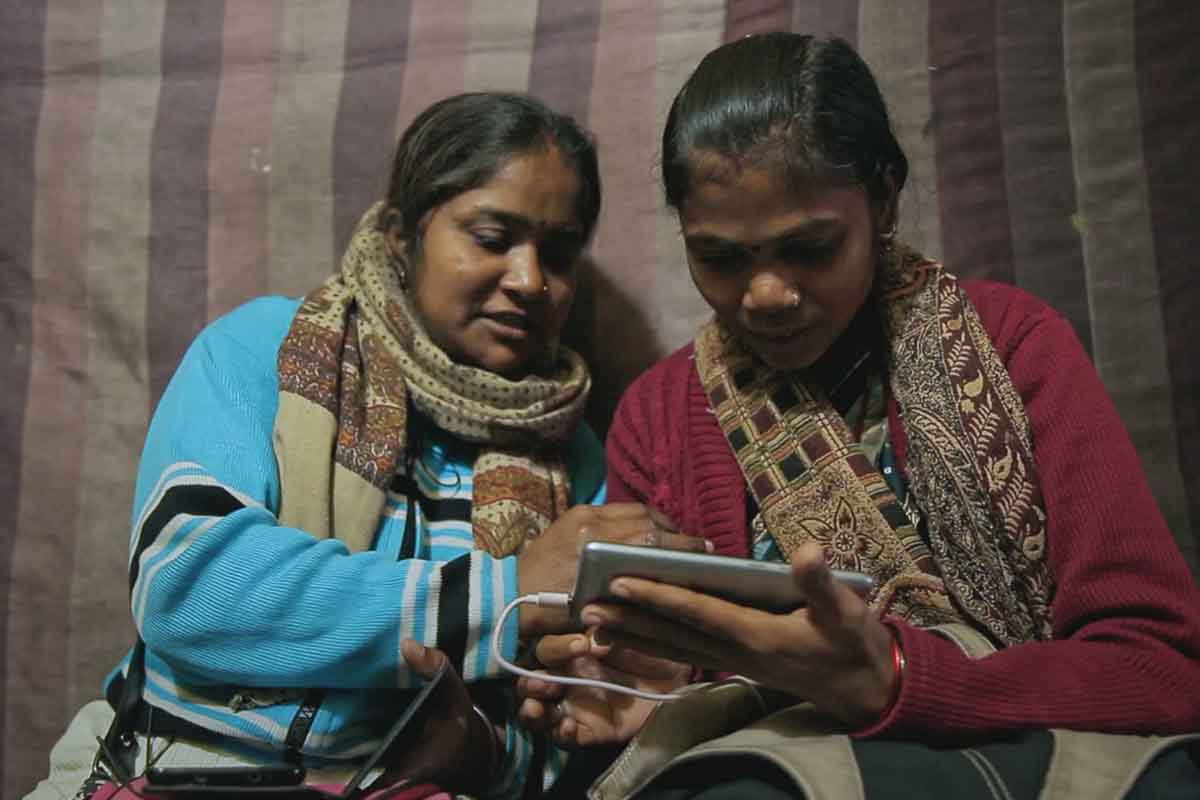 Filmmaker Rintu Thomas’ recent film Writing With Fire (co-directed and co-produced with Sushmit Ghosh) is our Logan Elevate grantee. She and Ghosh will also be receiving our Courage Under Fire Award this year. For the Chicken & Egg Pictures blog, Thomas writes about her journey making this film and the connections it helped her build.

For the "world premiere," we sat on our living room sofa in front of the TV screen with our family, friends, and their dog and cat. Yet it felt so lonely.

And then something beautiful happened: Our phones pinging non-stop with people from all across the US tagging us in tweets, Instagram stories, and Facebook posts about their experience watching the film. That’s when we realized the power of the moment. On that sofa, we were joined by an invisible but a definitive audience of 5,000 people from across the US: we got messages of love from a teacher in Colorado, a fireman from San Jose who watched it with his family, an elderly grocery shop owner from New Jersey.

Over at The Hollywood Reporter, Mia Galuppo speaks to Sarah Harris, AFI Fest’s Director of Programming, about "programming parity, increasing accessibility and the role festivals will play in the post-pandemic theatrical recovery."

We don’t do quotas, we are just mindful of what we’re representing. And I think that speaks to the programming staff. We also know our blind spots, and we talk about our blind spots as well when we’re discussing films. Being a woman director of programming, gender parity is something I feel very strongly about, and we’ve been successful with that every year since I’ve been here. But it’s more than that.

Dear Producer’s Sean Farnel writes a how-to guide for independent filmmakers who want to submit their film to festivals, as well as a caveat on "how bogus festivals exploit an aspirational culture (the top fests too)"

The top of the festival food chain feasts on submission fees. These festivals have deep industry networks, do extensive tracking of productions, and actively solicit works for their events. At the major festivals and most credible film festivals, submission fees remain a tax on the outsiders and unsolicited entries are merely revenue-generating fodder.

Film festivals need to address this problem, starting at the top. And the many established, credible, decent, worthy international film festivals doing business on FilmFreeway need to start insisting that the company, recently acquired by Backstage, clean up and apply basic standards and ethics to all events soliciting on the platform.

For Hyperallergic, Munir Atalla speaks to the organizers of Queer Cinema for Palestine, "a global alternative event to the Israeli-government-supported Tel Aviv International LGBT Film Festival."

As queer people, we are inevitably looking for ourselves on screen. Especially those in isolation within patriarchy don’t see ourselves in our surroundings, except for what we might see on screen. Those relationships are necessary to create a sense of self, and they have the power to fundamentally change society. Maybe I’m predisposed to see it this way as a filmmaker, but it’s hard to think of another artform that has had more impact on the way people see us. The representation of queer lives in cinema can change opinions, humanize, promote empathy, and lead to debates about how to organize the society we live in. Queer cinema has always been part of connecting people and dismantling oppressive power structures around the world.

Our colleagues at New Day Films are celebrating 50 years of their fantastic organization. For the New Day Films blog, Amalie R Rothschild, Beverly Seckinger and Sandra Schulberg take a trip down memory lane and remind us of the radical work the organization has been doing since its inception.

New Day Films was founded in 1971 by four filmmakers to distribute their three feminist films for which educational distributors at the time claimed there was no audience: Growing Up Female by Julia Reichert and Jim Klein, Anything You Want To Be by Liane Brandon, and Amalie R. Rothschild's It Happens To Us. How wrong the naysayers were! "The whole idea of distribution," noted co-founders Julia Reichert and Liane Brandon, "was to help the women's movement grow. Films could do that; they could get the ideas out. We could watch the women's movement spread across the country just by who was ordering our films. First it was Cambridge and Berkeley, and then the first showing in the deep South. "

From the Archive, September 1 2001: "30 Years On, There's Still a New Day For Marketing and Distribution"

In the early ’70s, four producers learned that their feminist films were too "controversial" to market. No distributor would touch them. So the producers pooled their resources: They bought mailing lists, designed brochures and sent them out. The strategy worked, and New Day Films was born. Within a few years the cooperative had expanded to include other producers whose films focused on issues of social justice and diversity. Today, New Day has 67 independent producers with 138 films and videos on topics ranging from multiculturalism to media to mental health.

END_OF_DOCUMENT_TOKEN_TO_BE_REPLACED

It's a New Day: Collective Distribution

The Art and Business of Festivals

IDA Truth to Power Award: A Conversation with Rappler Reporters