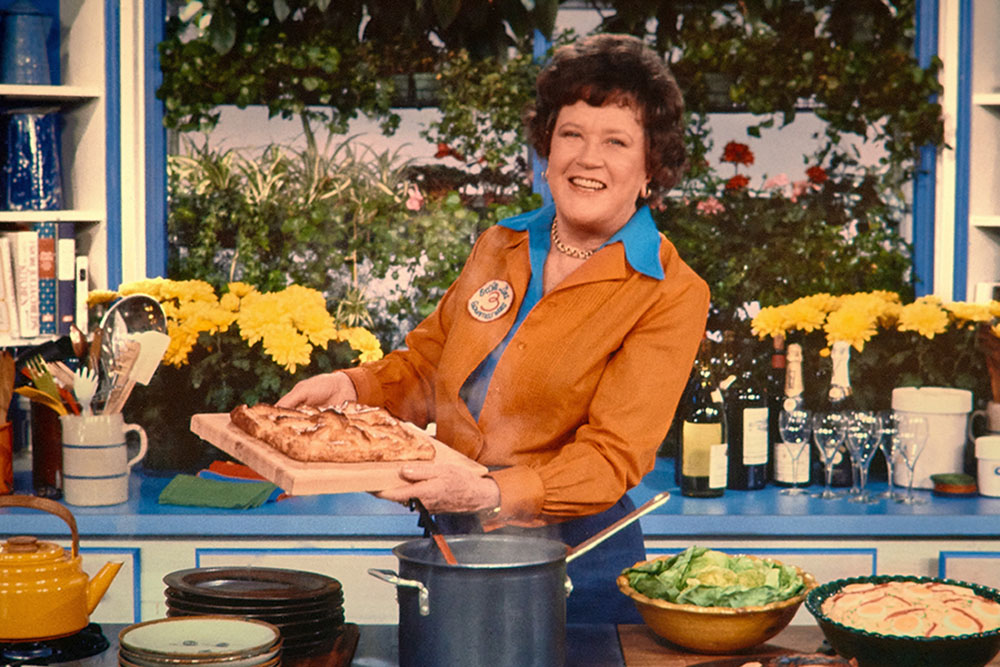 While many docs submitted for consideration this year were pandemic-related, Powers decided to keep the lineup COVID-free.

“I felt like we had a great film about COVID last year in 76 Days” says Powers. “The challenge for films about COVID are that every conversation we have is about COVID, so I felt festival audiences were interested in something else.”

But Powers maintains that Julia is a COVID-related film “through a different lens.”

“So many of us have had to re-engage with the kitchen or engage for the first time with our kitchen in a deeper way [in the last 18 months],” explains Powers. “It was marvelous to watch this film about a woman who dedicated her life to making people feel less intimidated about home cooking. So that hits in a very different way in 2021 then it would have two years ago.”

Nicolás Pereda’s Dear Chantal is a beguiling imagined correspondence with legendary Belgian filmmaker Chantal Akerman about an apartment rental in Coyoacán. Vika Kirchenbauer takes a similar first-person approach to The Capacity for Adequate Anger, an essayistic reflection on the contradictions of working within the art world that combines scenes from children’s TV with both found and original still imagery, transporting the viewer from the home of Kirchenbauer’s grandmother in Germany to Hameau de la Reine, Marie Antoinette’s fully functional fairy tale village in Northern France. South Korea’s Jeju Island provides the setting for Minjung Kim’s The red filter is withdrawn., a striking work that applies the painting-within-a-painting conceit of René Magritte’s La Condition Humaine” series to images of coastal caves. Accompanied by text from a 1968 performance-lecture by Hollis Frampton, it’s a meditation on colonialism that doubles as an acute investigation of form.

I half-jokingly refer to the movie as the parts that were left out of the Ken Burns documentary (the 10-part history that ran on PBS in 2001). Twenty hours long, an exhaustive study of the idiom, and about 30 seconds devoted to free jazz. [Former Village Voice jazz critic] Gary Giddins was a talking head in that movie. I always thought he was aligned with the aesthetic put forth in that movie. I had a friend who was doing sound on a shoot with him and he was talking to him. “Not too much free jazz in that movie.” It turned out Gary was revulsed by that, and he had to implore Ken Burns and Wynton Marsalis just to have the name Ornette Coleman included in the movie.

The Guardian’s David Smith looks at the new documentary Fauci, from Janet Tobias and John Hoffman, and explores how the disease specialist has become a pop culture phenomenon.

Fauci won the respect and friendship of AIDS activists such as Staley, who remains an adviser to him in the COVID pandemic and says: “I almost think our friendship has got a hefty side of S&M to it. I love the guy, but half the time I’m very frustrated with him and almost furious at times, including the past two years during COVID.

“I’m an activist, so I tell him in very blunt terms on almost a weekly basis what my frustrations are and it doesn’t seem to diminish the friendship; if anything, it strengthens it. That shows a character that very few people have. I find it pretty extraordinary and I call it S&M because maybe the guy’s a masochist. I don’t know. I’m beating him up on a pretty constant basis.”

Over at Film Comment, Aaron E. Hunt recommends Jessica Beshir’s Faya Dayi, which he calls “a hypnotic montage of the people, nature and Sufi parables.”

Shooting in black and white, Beshir makes this change indiscernible, and tries to capture the essence of the city and its rituals of khat beyond the dependent monoculture wrought by globalization. Beshir’s lens is elusive, often thwarting connection: whenever someone in the film begins to crystallize, her camera wanders elsewhere. Eschewing historical context and exposition of Ethiopia’s ongoing genocide, her expressive, slow-motion portraiture instead captures a perpetual inertia. Mothers await sons who never return, and children await the means to reunite with parents who’re abroad.

Hyperallergic’s Dan Schindel writes about the media’s coverage of 9/11 and argues how it “retraumatizing gawking or empty nationalism.”

The documentary-industrial complex produces films to go along with any event as a matter of course, with the volume of titles generally corresponding to the perceived importance of each one. This is a system that aims to satisfy audience’s desire to “understand” difficult subjects — please bear in mind that this does not necessarily entail informing them well, and it of course has no obligation to produce movies that are, you know, good. Just keeping to the realm of War on Terror-related film, there have been a lot of bad Iraq War docs and a lot of bad Afghanistan invasion docs. But even accounting for the usual weight of worthwhile vs. sloppy work made on a given topic, the sheer number of spiritually vacuous and cynical films about 9/11 is intimidating.

From the Archive, November 2004 Issue: “9/11 Docuganda: Figuring out the 'Fahrenheit' Phenomenon”

"Documentary is one of the dominant narrative expressions of the modern age," Mertes continues. "It is the new literature. The nonfiction field is exploding with possibility, yet also suffering from over-exposure, and increasingly improbable financial expectations and formulaic filmmaking. More people than ever are identifying as visual storytellers using the nonfiction forms, and audiences are growing more accustomed to seeing documentaries as a viable form of entertainment as well as an information source."

If Michael Moore's role is to engage people in the emotional art of separating fact from fiction, it may be that unseating a president won't be his most significant accomplishment. In a world where big media get to stand on top of the electronic mountain and deliver "facts," and small media (code for documentary filmmakers) need to toss our homebrew DVDs over the garden wall, Moore's willingness to force us all to examine the ideas we consume and the agenda of their makers could well be the most significant public service that Fahrenheit 9/11 will perform.