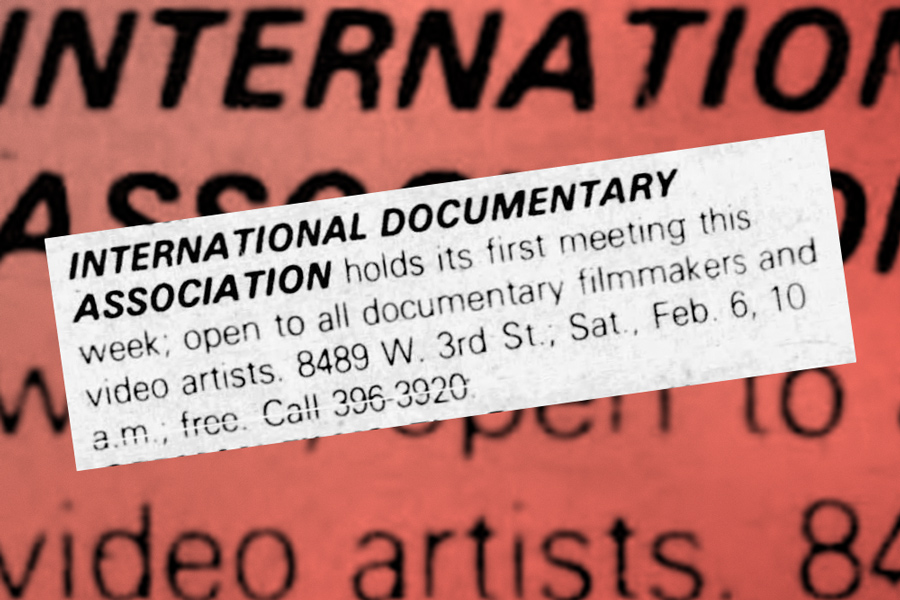 Forty years ago, on February 6, David L. Wolper and 74 other filmmakers answered a classified ad announcing the first meeting of the International Documentary Association (IDA). They met in Los Angeles, seeking to elevate documentaries in the film industry and beyond. While both IDA and the larger nonfiction community have continued to transform in size and form, we are revisiting some key moments and boxed-up memories on this day of celebration.

Within two years, IDA was hosting numerous educational seminars and had already organized the first annual DocuDay—an all-day, back-to-back screening marathon of Oscar-nominated documentaries. A tradition of IDA connecting the audience with the best of the form, and its storytellers, was born. By fall of 1983, the Los Angeles Times called IDA “an outspoken champion for its members, a 300-strong group of nonfiction filmmakers.”

At the start of 1985, IDA was recognized as a 501(c)(3) nonprofit organization, laying the foundation for one of the first documentary-specific Fiscal Sponsorship programs in the US. After Pare Lorentz was honored with the inaugural IDA Documentary Award for Career Achievement, filmmaker Les Blank became the first IDA-fiscally-sponsored member, in 1986. Since then, we have helped thousands of projects get funded, finished and seen.

By the end of the decade, IDA had firmly established itself as an organization that showcased the genre and supported the work of creators. The quarterly Documentary magazine, then International Documentary, was distributed on newsstands in Los Angeles, San Diego and New York in the fall of 1988. DocuFest, another all-day event featuring IDA Documentary Awards winners, was broadcast on The Discovery Channel in 1989. In conjunction, IDA’s first community outreach program brought the DocuFest program into schools and low-income communities in Los Angeles. 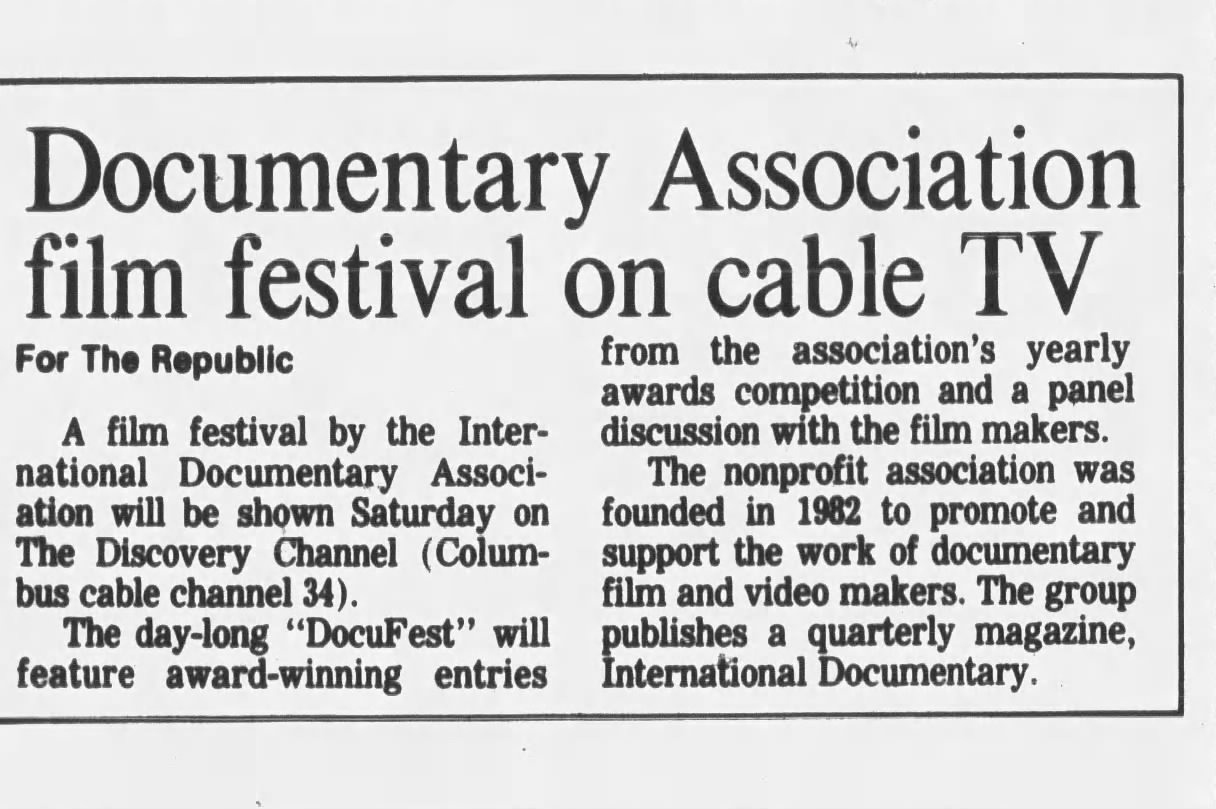 For those introduced to IDA through Getting Real, you may be surprised to hear that IDA and the Academy of Motion Picture Arts and Sciences first collaborated on Getting Real’s arguable precursor, the International Documentary Congress. Driven by the shared commitment of bringing together the community in constructive dialogue, more than 750 documentary makers, from over 25 countries, gathered in Los Angeles from October 21-23, 1992. They attended sessions on funding, distribution, marketing, new aesthetics, ethical standards, documentaries as tools for social change and censorship—sound familiar? The second edition took place in 1995, and the final and third assembly wrapped in 1999.

Beginning in 1997, IDA helped independent filmmakers qualify for the Oscars via the DOCtober Documentary Film Festival. With DocuFest expanding to the East Coast, IDA ambitiously opened a short-lived New York City office in 1999. Despite challenges, IDA had grown as an organization from a $240,000 budget in 1990 to over $850,000 by the end of the decade. 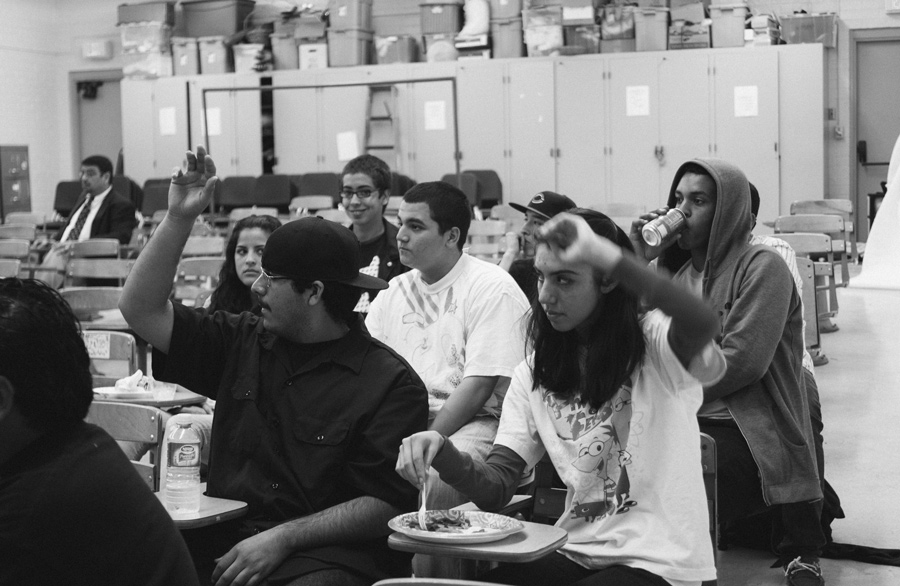 Entering the digital age, IDA launched a youth documentary curriculum known as DOCS ROCK. Through the 40-weeks-long course, students first studied documentary film history and aesthetics, thereby honing their critical thinking skills. The second half of the curriculum focused on hands-on productions of digital documentaries. DOCS ROCK was taught at San Pedro High School beginning 2001 and continued through the decade.

In 2004, DOCtober was renamed as InFact Theatrical Film Showcase, then again as DocuWeeks from 2006. During the 16-years run from—DOCtober to DocuWeeks in Los Angeles and New York—30 films were nominated for an Academy Award with seven taking home the honors.

In the later half of the 2000s, IDA began its decades-long advocacy efforts on behalf of docmakers seeking reform on the issue of orphan works, Digital Millennium Copyright Act exemption, and net neutrality.

After 20 years of empowering emerging artists, IDA’s educational seminars were rebranded under the umbrella of Doc U; and for the first time, offered outside of Los Angeles starting in 2010. In response to sweeping rule changes in the Oscar documentary process, DocuWeeks was replaced by the IDA Documentary Screening Series in 2013.

Three years later, IDA, in partnership with DCTV, relaunched the DocuClub work-in-progress screening series. Modeled after the European "cineclubs" of the 1920s and 30s, the original collective came to itself in 1994, offering the New York City community the opportunity to screen rough cuts of their films to audiences comprised of fellow makers, editors and the general public. DocuClub operated as a membership-based nonprofit organization from 2004 until 2007, expanding its In-the-Works programs at festivals across the US.

Later this fall, we are looking forward to the fifth edition of the Getting Real Documentary Film Conference. Launched in 2014 as a biennial filmmaker-to-filmmaker event, #docsgetreal has established itself as one of the preeminent field-building incubators in just six short years, attracting thousands of thought-leaders and independent filmmakers from around the world.

Much of IDA’s growth and evolution in recent years reflect our commitment to supporting a diverse, inclusive and truly international documentary community. There’s much work to be done and more memories to be made. Happy Birthday, IDA!

END_OF_DOCUMENT_TOKEN_TO_BE_REPLACED

40 for 40: IDA-Supported Docs To Watch For Our Birthday

The Origins of the IDA: Organization Founded to Promote, Support and Celebrate the Documentary