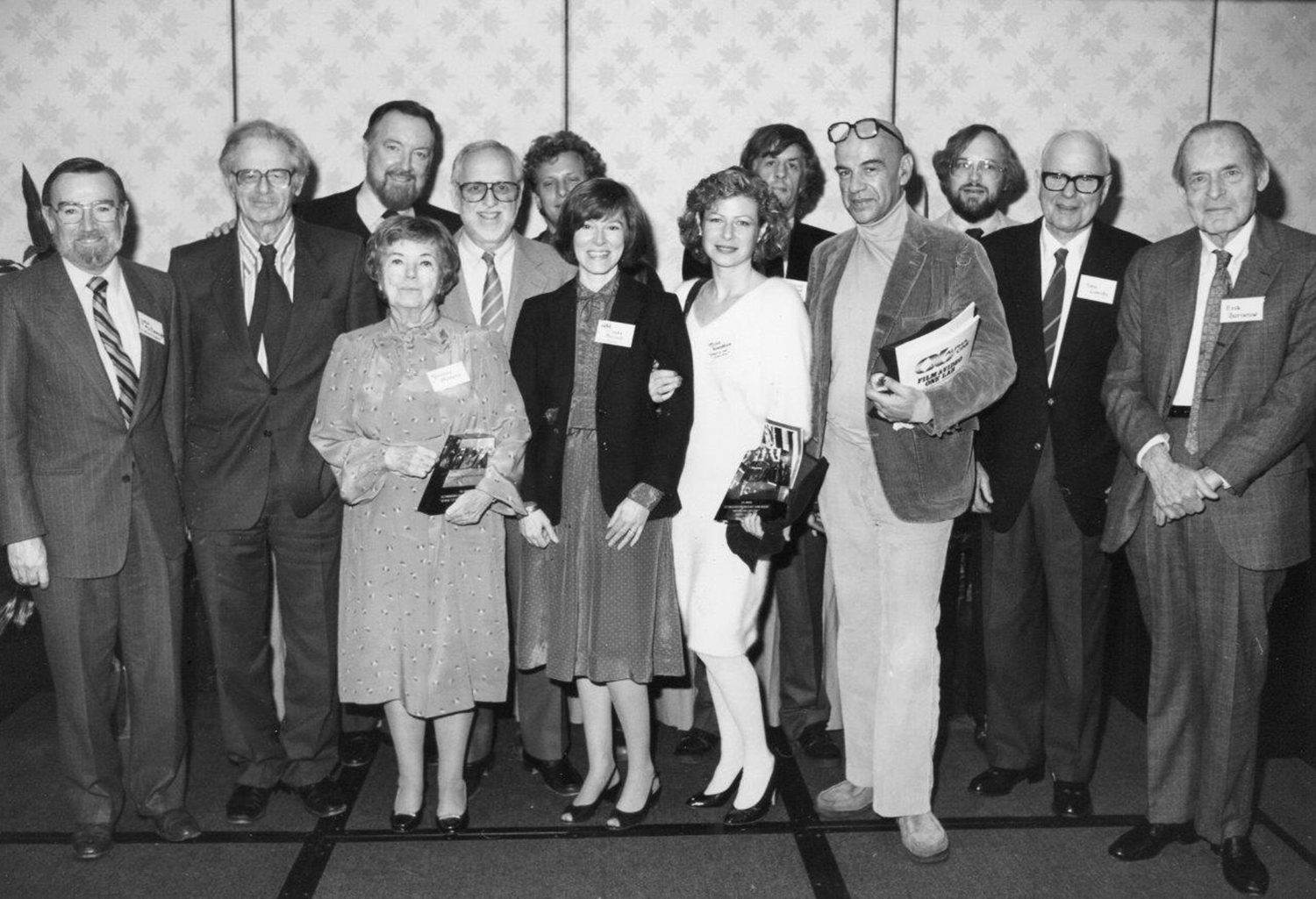 Thirty-seven years since IDA was launched, the documentary form has soared in popularity, keeping us attuned, informed and endlessly curious. Not only have documentaries become a staple of every digital streaming platform available, but they have transformed into episodic content, audio stories, animation and immersive, new media experiences that have widened the scope of what a documentary means, or can achieve. As the 35th anniversary of the IDA Documentary Awards approaches, we reached out to some of the prime movers behind the awards, as well as some of the past winners, to give us a sense of the history and the impact of this prestigious program.

Although Linda Buzzell founded IDA in 1982, it wasn’t until 1984 when board member and former IDA President (1989-90) Harrison Engle took on his role as the principal architect behind the IDA Documentary Awards, which had a simple goal: to recognize and elevate documentaries and the filmmakers behind them. “The 1980s were a time of change for documentaries” says Engle, in regards to the early days at IDA. “Excellent films were often overlooked by the film community and the public, despite their artistic and social relevance.” Looking back on IDA’s first 20 years, in the March 2002 Documentary, Buzzell wrote a piece titled “The Origins of the IDA,” where she reflects on tough times for the documentary genre: “There were people who told me I was nuts to think we could get documentarians—a notoriously independent breed—to work together to resurrect interest in the supposedly terminally ill documentary.”

There was opposition towards organizing an awards ceremony within the IDA itself. “Many on the board in 1984 were not enthusiastic about the idea,” Engle contends. “It was a different era, and not many organizations other than AMPAS were actually giving awards then. Several members felt that this would be a money-losing proposition for IDA.” Determined, Engle designed IDA’s first award (titled “Distinguished Documentary Achievement”), had a chrome prototype manufactured, secured major funding support from the Eastman Kodak Company, and upon presenting his work to a surprised board, began drafting the rules and procedures for the first IDA Documentary Awards. “I wanted a specific emphasis on artistic and cinematic achievement, to distinguish our process from the various ‘talking head,’ issue-driven or often cliched choices made by the Academy,” he remarks.

In 1985, the inaugural IDA Documentary Awards took place as a luncheon at the Sheraton Premiere hotel in Universal City, Calif.. “The Awards have come a long way since the first time,” says former IDA Board Member Gabor Kalman, who, in 1987, introduced the David L. Wolper Student Documentary Award to the lineup. “It was done on such a shoestring budget that when we ran out of hors d’ oeuvres, we needed to go around the room and quietly collect some cash from board members so we could order another platter from the kitchen.”

While former board member and Executive Director Betsy McLane reminisces fondly about the early days of the IDA Documentary Awards, she hasn’t forgotten the immense amount of hard work required by a much smaller team. “I had to run around and book hotels, tables, food, a program book with advertising, all thanks to the generosity of friends and filmmakers in the then small IDA community,” she says. Often, the Awards budget was so scant that she had to improvise. “One year we happened upon cases of those blue fat free Pringles chips containers. We had nothing else and ended up using the containers as decorative centerpieces!”

The preparation may have been a scrappy and somewhat disorganized affair, but the IDA Documentary Awards luncheons (later, dinners) exuded a lighthearted spirit and became an important staple of a burgeoning filmmaking scene. “There was a kind of intimacy and enjoyment with a touch of old Hollywood, which I miss in film gatherings these days,” McLane notes. “It was fun, often even wild, and everybody knew each other, most importantly, since it was such a hardworking, small team at IDA, I wanted to make it rewarding.” The intimacy of those luncheons were also understated in their importance for the field. They brought together documentary luminaries who have made pioneering contributions to the field, including Ted Turner, Jane Fonda, Walter Cronkite, Al Maysles, Pare Lorentz, the first recipient of the IDA Career Achievement Award, and Erik Barnouw, who received the first award for Preservation and Scholarship.

From Then to Now

In the last 35 years, the scope of awards has expanded considerably; McLane added the Best Short Award in 1994 and the Pare Lorentz Award in 1997, which has since expanded into the  Pare Lorentz Documentary Fund. In the same year, more categories, such as Limited Series and the ABCNews VideoSource Award were also added, followed by the addition of the Courage Under Fire Award in 2001 (recognizing the exemplary pursuit of truth in the face of extraordinary danger) and the Emerging Documentary Filmmaker Award in 2003. The formerly awarded “Best Use of Music” also transformed into the set of “Creative Recognition” Awards, including Best Music Score, Best Editing, Best Writing and Best Cinematography. After several years at the DGA Theater, IDA moved the Awards ceremony to Paramount Studios in 2014.

The documentary landscape is ever-changing, and the Awards continue to grow and adapt to this day. Recognizing the immense crossover of music, history and film, the Best Music Documentary Award was introduced in 2007. As an increasing amount of documentary content made its way online, the Awards expanded to reflect that: in 2014, the Best Episodic Series Award was introduced, reflecting the then-burgeoning TV and streaming medium. In 2018, the Best Audio Documentary (for radio & podcast), highlighting the sharp spike in nonfiction audio storytelling, was introduced.

This year, we are introducing the Best Director Award in addition to managing the largest IDA Documentary Awards competition to date. “We have about 800 submissions across nine categories and a team of 200 judges made of filmmakers, film festival programmers, producers, cinematographers, editors, composers, writers and podcasters,” says Juliana Sakae, IDA’s Awards Competition Manager. “It is very exciting to see the documentary world expanding exponentially. As an international documentary filmmaker myself, I'm honored to be a part of a competition that recognizes documentaries both big and small, making sure we have representation from diverse voices across the globe.”

In addition, the process of selecting nominees has become a long and meticulous one for the Awards team. “People don't know how complex our competition is: It's a nine-month process to build the judging teams, receive the submissions, screen and review them all,” Sakae adds. “It's a very detailed-oriented process to make sure each project is fairly reviewed among all the 16 awards we offer.” This is also the first year where the selection panel has been expanded to include more industry professionals. “We now have a panel made of editors, cinematographers, writers and composers reviewing and choosing the nominees and winner for the Creative Recognition Awards,” Sakae explains.

Ultimately, the Awards emphasizes powerful storytelling, regardless of the format they are presented in. Lourdes Portillo, one of the most decorated IDA Documentary Awards recipients (Distinguished Documentary Achievement Award in 1986, Best Feature in 1995 and 2002 and Career Achievement Award in 2017) asserts that in this dynamic industry, the Awards has not lost sight of the ultimate goal in the documentary space. According to Portillo, “The IDA enables us to fulfill our desire to tell our stories, because at the end of the day that’s what we do—tell stories in an interesting, artistic way.” Portillo especially appreciates the IDA Documentary Awards’ emphasis on highlighting emerging and established filmmakers, especially in a line of work that can be challenging for the former. “The industry has become largely focused on fundraising, equipment and technological tinkering,” she notes. “The amount the filmmaker has to deal with is overwhelming. I am grateful to the IDA Awards for recognizing the efforts of all kinds of filmmakers.”

Most importantly, the Awards inspires its honorees to continue making great films and telling great stories. Jehane Noujaim, who received a Best Feature Award in 2001, Emerging Documentary Filmmaker Award and Best Feature Honorable Mention in 2004 and Best Feature again in 2013, highlights how critical the IDA Awards have been to her development as a filmmaker. “The Emerging Filmmaker Award was an event that gave me confidence to continue, and that truly is the greatest gift,” she maintains. “In this world of filmmaking where there is no clear path and most of the time, it’s difficult to know if you’re on the right path, an award like this is a sign that you are doing something right.”

The David L. Wolper Student Documentary Award is the perfect example of the IDA Documentary Awards acting as a springboard for burgeoning filmmakers. In 1987, Gabor Kalman worked with late television producer David L. Wolper, who underwrote IDA’s outreach into schools and universities. “David was so open to our idea that he promptly wrote a check for $1,000; to recognize the best student film,” says Kalman. He was inspired to bring student filmmakers into the IDA community from his time teaching at the ArtCenter College of Design and USC School of Cinematic Arts. “I was exposed to excellent student films from schools around the world that were mostly unknown and unrecognized outside of the classroom,” he says. He felt that there was a need to “recognize, honor and publicize student-made documentaries.”

Though the Awards program has made considerable strides in over three decades, a key priority of the IDA is ensuring that it continues growing its reach. “We'll be looking to how we can recognize a broader set of the creators behind the stories,” says Executive Director Simon Kilmurry. “Documentary is an international language, and we'll continue our efforts to more fully embrace the full spectrum of work being done around the world.” Juliana Sakae echoes Kilmurry’s sentiments. “We want to enhance the international representation of the submissions to the Awards⁠—especially from Asian, African and Latin American countries,” she maintains.

With an increased focus on virtual, augmented and mixed realities at film festivals, and even IDA’s own Enterprise Documentary Fund now seeking immersive and interactive new media projects, there is a greater sense of urgency in recognizing technological innovation in the documentary industry. “There are so many new opportunities for creative storytelling that exposes society to new voices and visions that were previously unheard,”observes Harrison Engle, who has witnessed the IDA Documentary Awards’ growth since the organization’s inception. “These new tools are available to all. We must learn to appreciate all of these new voices.”

Though the IDA Documentary Awards competition has come a long way from the intimate luncheons in the 1980s, it is still the hard work of a small and collaborative team that ensures its success every year. With the help from dedicated committees, interns and volunteers, IDA is proud of what the Awards has achieved in 35 years, and will continue to highlight, inspire and create conversation around excellent documentary making.

END_OF_DOCUMENT_TOKEN_TO_BE_REPLACED

Two Decades of Doc Appreciation: The Legacy of the IDA Awards