Calling the Shots from a Wheelchair: A Filmmaker Reflects

When I was a child, I remember my father having one of those giant Panasonic cameras for home movies. I am one of six kids; I was the quiet, twiggy one, not ever allowed to touch this camera. However, one time on a family vacation, I grabbed the camera and took it a bit down the beach from where my family was. I started filming some seagulls on a boat with decaying wood and peeling blue paint. I thought it was beautiful and interesting to observe, but when my dad found me, he took away the camera and told me not to waste the VHS cassette.

Never did I imagine myself being behind a camera and working on my documentary, especially after I became paralyzed in a car accident on a family vacation the following year.

Getting a Camera Back in My Hands

After my injury, adjusting to my new body should have been my priority, but all I thought about were my friends and being able to make art again. I took art classes where my schedule allowed and had an assistant in class to help me. It was frustrating to not be able to make art by myself anymore, but eventually, I was relieved when I started to find ways to hold pencils and brushes and use a sewing machine. Having an assistant gave me the courage to enroll in a photography class. I researched ways of holding the camera since my hands and fingers now had limited movement and sensation, which hampered my ability to capture the images I wanted. I gave up on taking photos.

One day a friend of mine, also a quadriplegic, showed me that I could use a point-and-shoot camera with a timer. That tip gave me a bit more independence and control. Eventually, with a smartphone, I was able to use voice commands to take photos.

In 2015 while working on an exhibition, one of my collaborators introduced me to their neighbor, who worked for Canon. She knew I had been taking photos with my phone and offered to show me some tricks with a Canon camera using WiFi, a tablet, and an app. Later, when we met up, she was prepared with a camera and even put together some mounts for my wheelchair, using clamps and photo equipment. I was very impressed at her creativity and willingness to play and problem-solve. This was the beginning of new possibilities creatively for me.

I began to experiment with this camera, seeing what I could do with photos and video. At the time I was working on a project called Tres Fridas Project, a collaboration with two other women artists with disabilities. We recreated 16 images of iconic works of art and replaced the subjects with models with disabilities. Our process included photographing our model, and recreating the backdrop and costumes. During every photo shoot, we documented our process through photos and film and interviewed our subject on a topic related to disability. The collection includes recreations of Dos Fridas, Mona Lisa, Rosie the Riveter, The Last Supper, Whistler’s Mother, Old Guitarist, Christina’s World, and more, all with the subjects being people with disabilities.

While creating this project, people responded to our collaborative process and how the disability experience informed it. One of the most meaningful parts for me was witnessing the enthusiasm and vulnerability of the participants or models with disabilities as we interviewed and photographed them. It was activating a lot of excitement, and it got me thinking about community and telling our stories from our perspective through art and film. It helped me build upon a sense of pride that I feel for my disabled ancestors, what they left behind and what I will one day leave as evidence of my existence. This project was the beginning and what eventually led me to work on the film I am working on today. 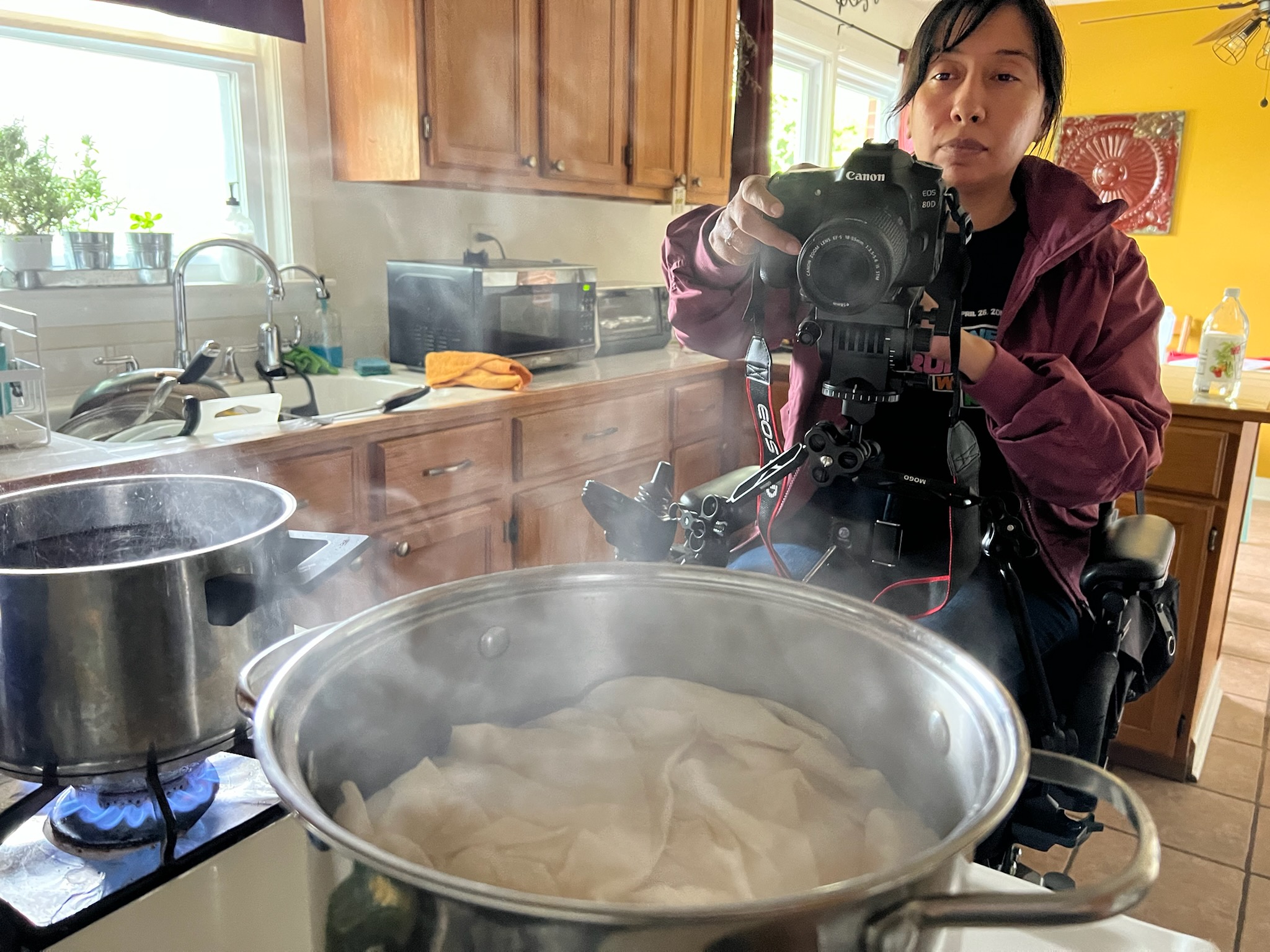 For the past couple of years, I have been working on a feature-length documentary in which I have a dialogue with disabled artists Frida Kahlo, Vincent Van Gogh, and Henri Matisse through letters, journals, and art, while engaging and collaborating with contemporary artists living with disabilities. This film has become a way for me to honor artists with disabilities from the past and the contributions they left to the world; more importantly, it is a celebration of my community of disabled artists in Chicago and the support, joy, and championing we all have for one another.

I have been learning, as I go, to use cameras and what all goes into making a documentary, including impact, distribution, finding funding, and more! At the same time it has felt like art-making in a different way, with a new medium; liberating and playful.

Though I may be experimenting, I have always been intentional in that the camera’s point of view is distinctly that of individuals with disabilities. Many times, a camera is attached to the wheelchair through mounts that were designed with the help of an occupational therapist and an engineer. Attaching the camera to the wheelchair results in the viewers’ eye level being lower, and when in movement, the wheelchair creates unique tracking shots, pivots, and framing. Other times, because my disability limits my ability to pick up a camera and change settings, I rely on my directing abilities to execute my vision through an assistant who takes the place of my hands. A lot of creativity has come from troubleshooting or finding creative solutions to filming from a wheelchair.

By exploring sounds, open captions, and audio descriptions in an artful way, I aim to make the viewer pause to appreciate the artmaking and aesthetics of accessible filmmaking. This is an area where I am working with my longtime friend Matt Lauterbach, founder of All Senses Go (which advocates for accessible media), the film’s editor, and a key creative collaborator when it comes to incorporating accessibility into the film at all stages.

We recognize that it's likely we might not get it right because what may be accessible for one person might not work well for another. However, if that happens, I expect that this will become a way to start conversations on how we can be more inclusive.

Mounting the camera to my wheelchair and incorporating accessibility features is not a new idea. Recently films like Reid Davenport’s I Didn't See You There and Alexis Neophytides and Jay Molina’s Fire Through Dry Grass are incorporating similar ideas with different techniques and aesthetics. It is exciting to see more and more filmmakers with disabilities telling their stories through their own lens. 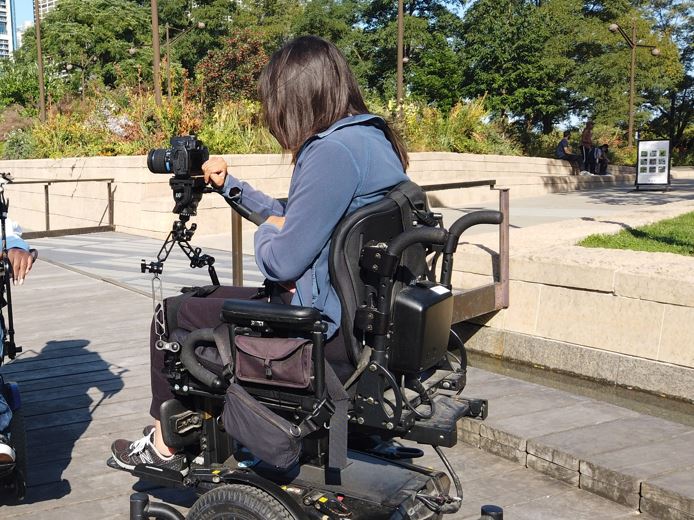 In 2017, having never made a film before and with no idea what I was doing, I applied for the Diverse Voices in Docs Program at Chicago-based Kartemquin Films. To my surprise, I was selected among other BIPOC filmmakers who were either at the beginning stages of an idea or already making a film. Even though I belonged, I was intimidated because I was a person with a disability entering a space of able-bodied peers, but I was open to learning from them and I felt confident that my voice was unique. By the end of the program, I felt a part of this community. The following year I was selected for a fellowship with 3Arts, an organization supporting Chicago-based women artists, artists of color, and Deaf/disabled artists. Through Kartemquin and 3Arts and the local Chicago community, I started to feel supported as an artist and I gained confidence in my work.

As COVID loomed upon us, I was uncertain what the pandemic meant for me personally and for the disability community, who was already isolated and struggling. Luckily I was fortunate to have food, shelter, safety, and a caregiver that was willing to be my full-time assistant. Together we picked up cameras and started filming anything and everything in our small little world. I had some amazing opportunities that I was able to participate in virtually such as being selected as a Documentary Magazine Editorial Fellow, and a Fellow in the Hulu + Kartemquin Accelerator Program. All of these opportunities I was eligible for because they were focused on elevating the voices of underrepresented communities. I am a disabled Mexican-American woman, and had these programs or opportunities not encouraged underrepresented applicants, I may have not had the confidence to even apply. Reading the criteria and language, I felt these spaces were ready and open to welcome me, embrace my work and think with an equitable lens.

Although we still have a long way to go, over the last couple of years I have seen the art and media industries be more inviting to underrepresented communities, even the disability community, which has historically been excluded from spaces claiming diversity and inclusion. Being a woman of color has helped me access spaces that are still excluding people with disabilities and has helped me broaden the definition of diversity and inclusion.

I'm excited to see that there have been more funding opportunities that are specific for filmmakers with disabilities or that invite filmmakers with disabilities to apply. Many of them are also tracking demographic information about disability in their data, which makes me feel hopeful that we are now being seen and counted. Film festivals are being more conscious about providing accessibility and getting called out when they need to do better (read Reid Davenport’s essay in Documentary). Films about disability, like James LeBrecht and Nicole Newnham’s Crip Camp, Sian Heder’s CODA and Reid Davenport’s I Didn’t See You There have been doing the festival rounds and earning much-deserved accolades.

I hope to see more mentorship and professional development opportunities for filmmakers with disabilities. I imagine fewer barriers and more spaces that feel inviting and welcoming to the work that we are doing and that we are being supported as artists and filmmakers.

Reveca Torres is an artist, filmmaker, and disability advocate. She is the founder of BACKBONES, co-director of ReelAbilities Film Festival Chicago, and a 2020 IDA Documentary Magazine Editorial Fellow.