Continuing to Shoot After the Shooting Starts: Dangerous Doc-Making 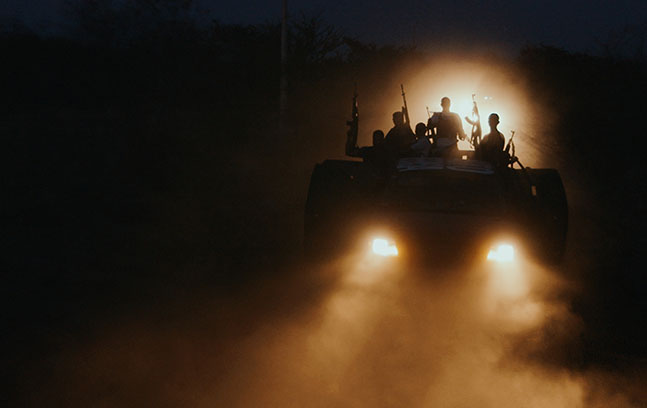 Before he made Cartel Land, director/cinematographer Matthew Heineman had never shot in a conflict zone. His work had focused mainly on US domestic issues in such films as Our Time and Escape Fire: The Fight to Rescue American Healthcare. He’d been shooting in Arizona, documenting the self-appointed guardians of the US-Mexico border, and after four months, he began to hear about vigilantes in Michoacán, Mexico, fighting for their lives and for protection against a corrupt government and the drug cartels that have all but decimated modern Mexico.

“I've never been in a place where bullets were flying before,” says Heineman. “I think what calmed me down—especially that first time—was just focusing on the craft of filmmaking: concentrating on focus, framing and exposure, even making sure the record button was on. It allowed me to be somewhat calm during those really intense bouts of violence.”

Heineman earned the documentary directing award at the 2015 Sundance Film Festival for Cartel Land, as well as a special jury prize for cinematography (an award that he shared with fellow cinematographer Matt Porwoll). He gained unprecedented access for an on-the-ground look at the journeys of two modern-day vigilante groups and their shared enemy—the murderous Mexican drug cartels. Heineman filmed, often alone, in a variety of difficult situations, including shootouts between vigilantes and cartel members, meth labs and an especially intense torture chamber. But he makes clear that he wasn’t in it to get some adrenaline rush. “I always knew exactly what I needed, what I wanted and why it was important to the story,” he says.

Despite trying to calculate the dangers, Heineman found that Mexico was a hard place in which to predict anything. “You have your antennae up,” he explains. “The warfare is completely amorphous, the violence can erupt at any moment.” So letting your instincts take over is an important part of filmmaking in harsh and dangerous situations. Not everyone is capable of that. It takes a very specific person to be able to handle this type of work, and cinematographer/director Rachel Beth Anderson agrees with Heineman, believing that most filmmakers in conflict zones, war and harsh weather conditions go into auto mode.

“There’s something about putting that camera up,” Anderson says. She won the jury prize for excellence in cinematography at Sundance 2014 for her work on E-Team (Dirs.: Katy Chevigny, Ross Kauffman), a documentary about a collection of fiercely intelligent individuals hired to document war crimes and report them to the rest of the world. “All of a sudden you’re using your technical brain,” Anderson explains. “You’re able to push back against the fear because you’re there to a do a job—a good job, but most importantly you are aware that the risk is only worth it if you are able to bring back the story.”

While Heineman found himself in the middle of a conflict not quite on purpose, Andrew Berends knew that he wanted to get to the heart of a particular conflict because he felt personally upset about it. He’d been living in New York City and about a year after the invasion into Iraq in 2004, he decided to go and document the war.

“I was Christmas-shopping in Manhattan,” he recalls, “and I just thought, ‘Man, this is what it’s like when the US is at war?’ I imagined it was a little bit different in Baghdad. There was this huge disconnect between the reality for us and the reality of what it would be like to be in Iraq in the war.”

It kept bothering Berends, and he wanted to close that disconnect for Americans. Despite being terrified of what he might be getting into, he reached out to filmmaker James Longley, who was making Iraq in Fragments at the time. He advised Berends to get on a plane to Jordan and then take a taxi to Iraq.

Why would Berends put himself in a dangerous situation? “It has to be something I think is meaningful,” he explains. “It has to be worth the risk. It has to be a story that I feel needs to be told.”

With statements like that, one wonders how much the danger is calculated before a filmmaker travels to a combat zone or a 130º desert. Anderson thinks about it more now after six years of doing this kind of work. She admits that when looking back at some of her earlier work out of Libya, things she did were risky. “I think you get complacent and comfortable with the risks that you take when you live in a place where there’s such a high tolerance for violence,” she says.

Heineman had thought that his initial trip to Michoacán would be for a couple weeks, but nine months later he was finally able to wrap principal photography. But he doesn’t think he caught the bug like Anderson and Berends have, although he tips his hat graciously to filmmakers and journalists around the world putting themselves in dangerous situations for the sake of the story being told.

“It’s not like I want to go out there and be in the line of fire again,” Heineman explains. “I always knew that these situations were important to tell this story. Capturing that shootout was really important to the film, and if I didn’t capture that I wouldn’t be telling an honest and truthful story.”

When it comes to important stories, they’re not always the most appealing. In fact, more often than not they’re probably downright unappealing situations to put yourself into. The last film Berends shot and directed was Madina’s Dream (2015), a documentary about the war in the Nuba Mountains in Sudan. He hadn’t wanted to make the film, but after traveling to a refugee camp on the border in the south of Sudan and learning about this essentially unreported war, he knew he had to take the project on.

“There are virtually no journalists covering this war,” he explains. “I felt that someone needed to tell these people’s stories. There was a moral imperative to do it. I don’t always do it for the excitement; it certainly drives me, but it’s not my reason for doing it. Two-and-a-half-years later, I’m glad I did it and I hope the film has some impact, but I don’t delude myself to think it is going to end the war.”

Spending four months straight in the often 135º weather with almost no electricity and no air conditioning was not appealing to Berends. When he got there, he wanted to leave immediately. Your body does eventually adjust, but it can take two or three weeks. It was the harshest climate he’s ever been in, and that’s including a fishing boat in the treacherous North Sea for his 2003 documentary Urk. Also, he contracted malaria while filming, and lost 25 pounds.

“You have to fatten up before you go,” Berends advises. “Not just muscle, but fat. I made milkshakes with heavy cream, eggs and butter for two weeks before I went because your body needs those reserves.”

In addition to dodging bullets and sweating in high-temperature deserts, these filmmakers also have to worry about their gear. Since digital technology is changing rapidly, their choices of cameras are as well, but lightweight always seems to be at the top of the list for preference.

While shooting The Blood of My Brother (2006) in Iraq, Berends used a Sony DVX100, which weighed about four pounds. It was one of the first 24p digital cameras and he loved that he could maintain a film look while shooting video. “There was limited electricity in Iraq,” he recalls, “so we figured out a system to charge the batteries, and we were shooting tape so it wasn’t that complicated. When I was in Nigeria and shooting Delta Boys, I had nightmares not only about being kidnapped, but also about how I was going to charge my camera batteries and download the cards to my laptop.”

Berends would have to back up everything every night, and this is at a camp where he shared a mattress with six big guys. Fortunately there was a generator he could use, but in the Nuba mountains, he had to charge off of car batteries; he’d bought a converter to make this possible. There was also one solar panel for the whole region, and three areas that had generators.

“Sometimes I’d have to go to the front for a few days and I’d pack all my charged batteries and chargers, laptop and hard drives and the camera—50 pounds of gear on my back—and hop on a motor bike,” Berends explains. “That definitely can cause some anxiety. I say, bring three times as many batteries as you think you need and three times as many memory cards.” And make sure there’s a generator available.

Berends shot Madina’s Dream with the Canon C300, which he admits was the best camera for the job, even though he’s not a sold fan of the equipment. “I think it’s idiotically shaped and designed,” he says, “but no more so than all the other cameras that are coming out right now. I find it inane that nobody will make a large-sensor video camera shaped like a video camera. They’re all sort of shaped like DSLRs. The Sony A7 weighs about a pound-and-half, but it’s shaped like a still camera and then when you have to add sound and a lens and make it into a video camera, suddenly it’s 10 pounds.”

Heineman used the Canon C300 as well and felt that it was the only camera that could've done the job on Cartel Land. He wouldn’t rig it up with a bunch of extras, but he opted for simplicity and just had the camera body, lens, eyepiece and mic. “I wanted a really cinematic look that the C300 brings, but I also wanted a camera that was mobile and that I could hike up hills with and get jammed in the back of cars with,” he says. “It was the perfect camera for that.”

On First to Fall (2013) and E-Team, Anderson shot on the Canon 5D. At the time being a one-women crew, she needed to be light on her feet; on E-Team, while being smuggled across the border into Syria, she carried all of her gear on her back. She enjoyed the results of the small camera, but with the new technology, working in super bright or super dark situations is a lot easier and the image quality is much more dynamic. Working in the Middle East, the light is only good for about four hours a day, so having cameras with balanced light sensitivity has upped her game.

“I’m now using the Sony FS7 and the Sony A7S,” Anderson says. “I’m also using these amazing little handheld gimbal systems that allow me to keep my gear compact—the Pilotfly HN1—because I can put the A7S on that with an automatic lens and run around like it’s a floating camera. It’s totally changing the cinematic value of what you can do in documentary filmmaking, and these systems are all less than $1,000.”

Valentina I. Valentini is a freelance journalist and producer based in los Angeles. She contributes to Variety, IndieWire.com, Vulture.com, ICG Magazine, British Cinematographer, HDVideoPro and more.

END_OF_DOCUMENT_TOKEN_TO_BE_REPLACED

Inside Out: Jessica Beshir