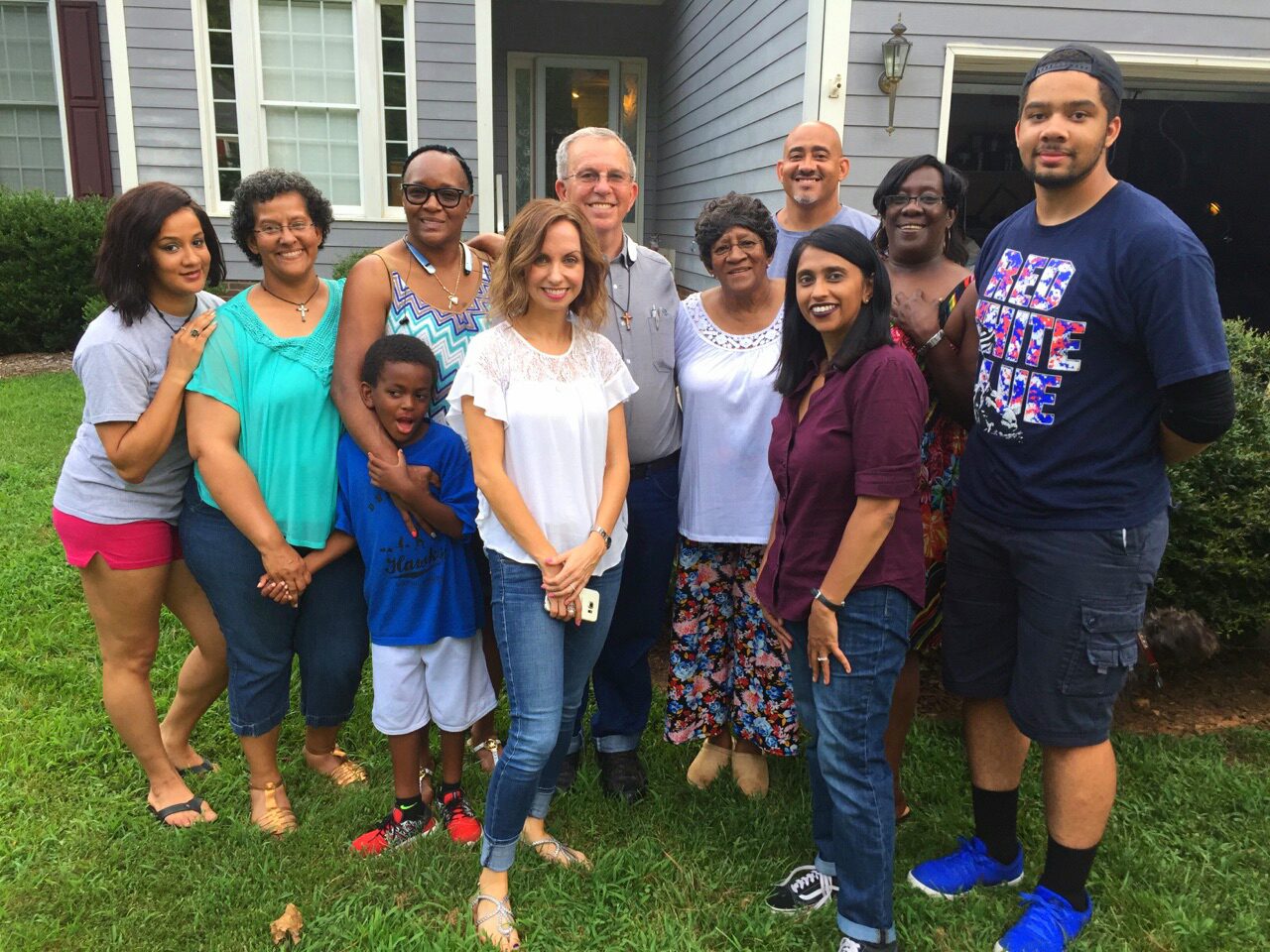 The comments—and the fetishizing perspectives—were naively unexpected: "What is he?" "Where is she from?" "Are they adopted?" "So exotic."

These are just a few of the remarks I've experienced in my decade-long journey as a white mother who gave birth to two brown children—alternatively called biracial, mixed, mulatto, swirls, black, depending on the perspective and region of the country. The aesthetic input is fairly innocent. But other moments have teeth: white parents and teachers who confuse my brown daughter with the one other girl of color in the ballet class; endless discussions about how I am ill-equipped to care for my daughter's beautiful biracial curls; and a pattern of events with my then-third-grade son that was impossible for me to understand until I finally picked up a book about unconscious bias that can plague boys of color in school.

Others have shared a full spectrum of unsolicited, strongly held opinions about how my children should identify themselves racially, and how I, their white mother, should impose identities for them: The one-drop rule means they're black, or they don't look black enough, or being mixed implies that they will be racially self-hating, confused or the opposite of "pure." These micro-aggressions—actually not micro at all—have also blended with a steady stream of other moments that can be best explained as overt racism. Still, for the most part, life is good and still innocent for them.

Even through this very small portal, the eye-opening foray into "experiencing race"—not a vantage point from which even well-meaning white individuals can usually see—is something I see as a real gift, because now my lens is different. I can't truly understand the experience of having brown skin in America, but in a small way, through the primal maternal connection to my children, I can empathize—not in a "race-is-the-‘it'-moment-social-issue, Facebook-meme-sharing" level, but at a gut level. Despite the shifted reality, I've never felt I had the permission or language or confidence to fully engage in a discussion about race, even while I parent brown-skinned children in a decidedly non-post-racial America. I feel self-conscious, despite the fact that I will soon have a conversation with my brown boy about how to comport himself around police, a sad rite of passage many parents of color know too well.

And so it came to be, through this new reality, that I admitted feeling pretty clueless about the whole thing. How would my children's racial identity develop? Is it even possible to identify fully as a mixed-race individual in today's America? Do mixed-race people face particular challenges, both individually and culturally and even medically? What should I teach them about racial and cultural identity—and, frankly, racism? Is this even an issue, a 50 years after mixed-race marriage was made possible by the Supreme Court?

Enter Leena Jayaswal, my brilliant colleague and friend—a documentary filmmaker, award-winning photographer and professor—who turned out to have the same set of questions at the same time. Racially speaking, Leena and I are opposites. She is an Indian-American mother of a biracial son, a product of her marriage to her white husband. Although Leena and I have articulated a similar set of questions as mothers, along with a shared connection about parenting biracial people, her experience is dramatically different than mine. She has been asked repeatedly if she is her light-skinned son's nanny, an occurrence she transformed into a photography exhibit entitled I'm Not the Nanny. Her film and photography work is rooted in racial and cultural identity. Her language in this space is fluent, sophisticated and deeply internalized—unlike mine—given the lived experience that distinguishes a brown woman and a white woman in America. Leena and I knew almost immediately that we wanted to team up, embark on a journey of discovery, hear stories around the country and commemorate a unique moment in time. For the past few years, almost a half century after the landmark 1967 Loving v. Virginia US Supreme Court case ended legal persecution of interracial marriage in the United States, we have been off and on the road producing MIXED, which explores what it means to be a biracial child living in a mixed-race family in so-called post-racial America, and the country's deep cultural ambivalence about its rapidly changing mixed-race reality. More than anything, we are in search of answers to our original questions. Along the way, we have become what we call "reluctant on-screen characters," which we think is necessary in order to provide authenticity to the narrative journey. It's easily the most vulnerable documentary or public project of which I've ever been a part.

We hope MIXED will offer a new lens into race and the lives of the first generation of mixed-race kids and families to be counted in the US Census, which has only been possible for 16 years. And the backdrop of today has turned out to be particularly meaningful: In an era in which biracial children are trying to understand both racism and white privilege, how do we explain the socio-political construction of race to a child who identifies as more than one? So, what have we—a brown woman and a white woman working together on a film about race—learned so far along the way, in places like New York and Texas and North Carolina and Maryland and Virginia, against the backdrop of Ferguson and #BlackLivesMatter and the historic Obama presidency?

We've learned that biracial people are pretty firm in their own ability to define themselves, and they can do without the societal pressures to be "just one thing" or to reject terms like "mixed." From one of a small handful of scholars who study biracial identity, Dr. Sarah Gaither, we learned that biracial people actually feel and express fewer racial stereotypes about all people than either black or white people. In our own very unscientific way, we think that's pretty fascinating for the future. As the United States population becomes more mixed over time, will we eliminate racism organically through racial evolution? It's a proposition we hadn't considered, but it matches the racial enlightenment that can emerge in mixed-race families.

What we've also learned, in an unexpected twist, is that endeavoring to understand biracial identity and confusion offers a kind of door-opener for people of different races to actually talk together about race, racism and racial justice more broadly. These conversations are by definition comprised not only of people of color discussing race and racism, but also white people who have experienced a new lens through their brown children. In other words, everyone is forced to confront his or her role in this set of questions. Many of our documentary subjects of all races have wondered aloud if the idea of racial mixing—with a particular focus on America's slavery legacy—is still so quietly or overtly offensive to some that it's more palatable to categorize Barack Obama and Misty Copeland and Alicia Keys as African-American, not mixed or biracial.

But what we've observed most consistently is how desperately America needs to share language and stories about race. White children and parents need language to discuss race, racial identity and racism just as much in their own homes so that the burden is not constantly on the shoulders of people of color—including biracial people—to endlessly point out micro-aggressions and questions of identity. We visited and filmed in a school in New York that created a mandatory racial affinity program, in which all children are required to talk about race and learn the language of race to help provide exactly this lens. But not all parents and families agree with this approach, including black parents, white parents and biracial families. There's no curriculum about race, which actually might be part of the challenge regarding this question concerning "having language" about racial identity that will empower more of us to talk openly. Language alone won't combat structural inequity and discrimination and stereotypes, of course, but it's a big step and apparently a major challenge revealed just from our own observations.

And not unexpectedly, we've learned that racism is alive and well, and it doesn't skip biracial people, despite our societal proclivity to fetishize mixed-race beauty. In the summer of 2013, when Cheerios aired a commercial starring a biracial family, the company opted to turn off the comments on its YouTube channel due to their overwhelmingly racist nature. In April of 2016, a similar backlash targeted an Old Navy ad featuring a mixed family.

Last July, an advertisement featuring a biracial family and children in the glossy metropolitan Houstonia magazine prompted an unexpected racist response—but one that was drowned out by an outpouring of letters from people from all over the country who supported the magazine's editor, Scott Vogel, when he published an unapologetic editor's note titled "Racist Readers Need Not Apply." We visited Houstonia's editorial offices and interviewed Vogel, who was visibly emotional talking about the incident, not only because of the positive letters and e-mails from people all over the country, but because of the depth of the discrimination biracial families and people of color shared with him. "I had no idea it was this bad," he said.

The San Antonio fire chief sent Vogel a medal of courage and a letter, both of which proudly hang in his Houstonia magazine office. In the letter, the African-American fire chief shares his story of discrimination and compares Vogel's bold public stance to the same courage required to "run into a burning building." On the day we filmed with Scott, we invited a handful of the supportive letter-writers to visit and talk about what his stance had meant to them and the chord it struck in their own lives. Considering this was a group of strangers, Leena and I were absolutely stunned—and very moved—by the personal stories, by the almost desperate desire of these people of all races to talk about race, to learn from one another, and to find courage to wage their own overt acts of defiance.

Through it all, as the white person in this multi-cultural documentary team, I realize that I've come to dislike the word "ally," as it implies a permanent bystander status. The goal for all of us should be a shared fluency of language about race, and the ability to talk openly. Our MIXED tour is far from over; there's much more to learn, but the journey has already changed us—and our kids—for the better.

Caty Borum Chattoo is co-director of the Center for Media & Social Impact and executive in residence at the American University School of Communication in Washington, DC. She is a professor, researcher, strategist and independent documentary filmmaker.MIXED is co-directed by Borum Chattoo and Leena Jayaswal, and executive-produced by Emmy- and Peabody-Award-winning documentarian Jeffrey Tuchman for Documania Films.

END_OF_DOCUMENT_TOKEN_TO_BE_REPLACED

An Obama Nation? One Filmmaker's Journey Since the Historic Election