Textbook Example: A History of Docs in 31 Essays 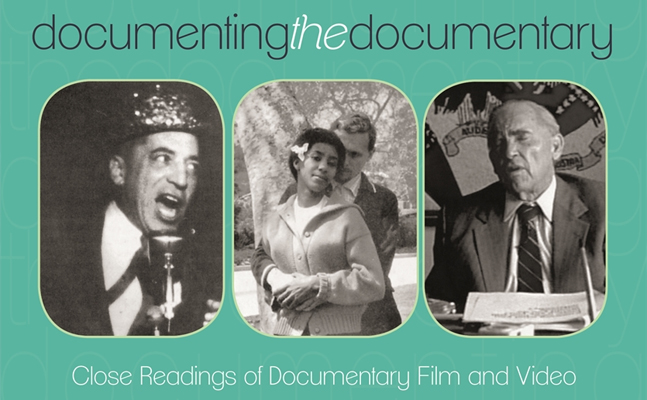 If I was suddenly asked to teach a History of the Documentary class and told that my budget would allow for the use of just one textbook, Documenting the Documentary: Close Readings of Documentary Film and Video is the one I would select. The first edition was released in 1998, still a time when documentary was elbowing its way into film-school curricula. This new anthology includes all the previous, exemplary essays as well as five new entries covering more recent films, bringing the discussion and analysis of the most influential examples of the genre up to date. Each essay is followed by notes and works cited, making for a very handy, useful way of organizing the material. Brief bios of all the contributors—some of with whom I was familiar, while others were welcome discoveries—are listed in the endnotes.

In the Foreword, Bill Nichols, the highly regarded documentary scholar and theoretician, tells us, "The complex, fuzzy boundary to the enterprise of documentary filmmaking is well registered in the striking absence from the first quarter-century of cinema (roughly 1895-1922) of any single word for what we now call documentary." This reinforces the knowledge that the genre is still a youthful enterprise, growing and evolving towards a more mature state, but a maturity whose form is not written in stone. A bit later he adds, "It remains to this day, a practice without clear boundaries." Perhaps it is this idea that continues to make documentary so exciting to makers as well as students of the form—the lure that if we engage, we can push the envelope and explore the landscape, and in the act of doing so, new realities will be revealed.

The book weighs in at a hefty 570 pages and is roughly chronological, beginning with "The Filmmaker as Hunter," William Rothman's familiar analysis of Robert Flaherty's Nanook of the North (1922). While a statement on the video release prefaces the film by saying, "This is generally regarded as the work from which all subsequent efforts to bring real life to the screen have stemmed," Rothman points out that while Nanook of the North "accurately illustrates aspects of its protagonist's way of life, its primary goal is not to contribute to a body of scientific knowledge of human cultures; it is far from an ethnographic film in the current sense." So already we can see, right from the start, that this thing we have designated as "documentary" will be a contested arena.

We are reminded in the introduction that in 1998, when the first edition of Documenting the Documentary was published, Michael Moore's Roger and Me (1989) had been "the most commercially successful documentary of all time." Since then, many documentaries have surpassed that benchmark, including four from Moore: Fahrenheit 9/11 (2004), Sicko (2007), Bowling for Columbine (2002) and Capitalism: A Love Story (2009). Interest in the documentary form had been rising in 1998, and the trajectory of this interest has only changed in that it is more ubiquitous than ever. We have become a world of documentary makers; we are openly and furtively capturing our own lives as we live them, one cell phone and YouTube upload at a time.

There is a broad misconception that documentaries are inherently more truthful than other films. They are not. We are assisted in unraveling this conundrum—what is real and what is true—when we examine a film like Dziga Vertov's Man with a Movie Camera (1929). In this chapter by Seth Feldman, "Peace Between Man and Machine," I found some of the most potent revelations regarding documentary film's power to both embody and predict the future. In the film's famous logo, a human eye superimposed on the camera lens, we see the perfect melding of human and machine-a forerunner of an increasingly blurred line between living flesh and inert material, as we absorb more machine parts into our bionic bodies, helping us to survive catastrophes in ways that Vertov had only begun to imagine in 1929.

Although his hoped-for "peace between man and machine" seems further away than ever, other ideas, then visionary, have become our new reality. Fed by the atmosphere of a rare period in Soviet history of social and economic pragmatism and artistic tolerance, Vertov proposed that Soviet films be "shot by large numbers of ordinary citizens acting as film scouts, edited collectively and exchanged in a vast nationwide network." It's as though he predicted our Googlized, Wikipedia'd and YouTubed culture 35 years before Marshall McLuhan declared that media is the "extension of man." There was a revival of interest in Vertov's work in the 1960s, and his work has even greater ramifications today.

We move from Vertov to another Soviet filmmaker, Sergei Eisenstein. Joanne Hershfield brings her in-depth knowledge and focus on Mexican cinema to an analysis as ethnography of Eisentein's Que Viva Mexico! (1932). Ethnographic filmmaking is an interesting and influential sub-genre of the documentary form that reached its zenith in the 1960s and '70s but had not yet been recognized as a scientific form in the 1930s when Eisenstein first came to Mexico. Hershfield's investigation of the filmmaker's encounter with the anthropological "Other" in Que Viva Mexico! makes for a richer understanding of the meaning of ethnographic film.

There are 31 essays in the book. The last two—"You Must Never Listen to This: Lessons on Sound, Cinema and Mortality from Werner Herzog's Grizzly Man" by David T. Johnson and "Cultural Learnings of Borat for Make Benefit Glorious Study of Documentary" by Leshu Torchin, bring us into developments in documentary of the last decade. Herzog, perhaps more than any other documentary filmmaker, makes good use of that fuzzy boundary between truth and fiction to achieve what he refers to as "ecstatic truth." He is notoriously ambivalent about subscribing to the terms "documentary" and "narrative" in defining his own work, and he relies on a "poetics of truth" to reach what is perhaps a more intense experience of reality. Sound—its presence and absence—is key in dissecting the aesthetics of Grizzly Man. For Johnson, this is apropos, as the theory and history of film sound has been central to his academic interests.

In the Borat essay, the term mockumentary surfaces for the first time in these discussions and, as Torchin points out, "begins to help us understand the work of the film, but it fails to account for the elements of cinema vérité, the reportorial truth-claims, the clear documentary potential of Borat's interviews." It is as though we are on a teeter-totter, slipping and sliding, up and down, between documentary and fictional elements, as allusive to the characters in the film as they are to the audience. As Borat traipses across the country, we are left to ponder who we are as Americans and what we really know about ourselves.

As we become ever more besotted by filmed "reality" delivered to us on our handheld devices wherever we are, whenever we want it, we need to be reminded, through a thorough review of the history of the genre, how all this happened so we can bring a critical awareness to what we view as a consumer and what we set out to create as artists and craftspeople. With this book as our guide, we will come out at the end of this exploration with "a profound appreciation of the aesthetic complexity of the documentary form."

Cynthia Close is the former president of Documentary Educational Resources and currently resides in Burlington, Vermont, where she consults on the business of film and serves on the advisory board of the Vermont International Film Festival.

END_OF_DOCUMENT_TOKEN_TO_BE_REPLACED

How News and Docs Covered Katrina: A Review of 'Flood of Images'

The Documentary Dukes and Duchesses of Cambridge