Enemy of the State: Erik Nelson on the Paranoid Nightmare of 'A Gray State' 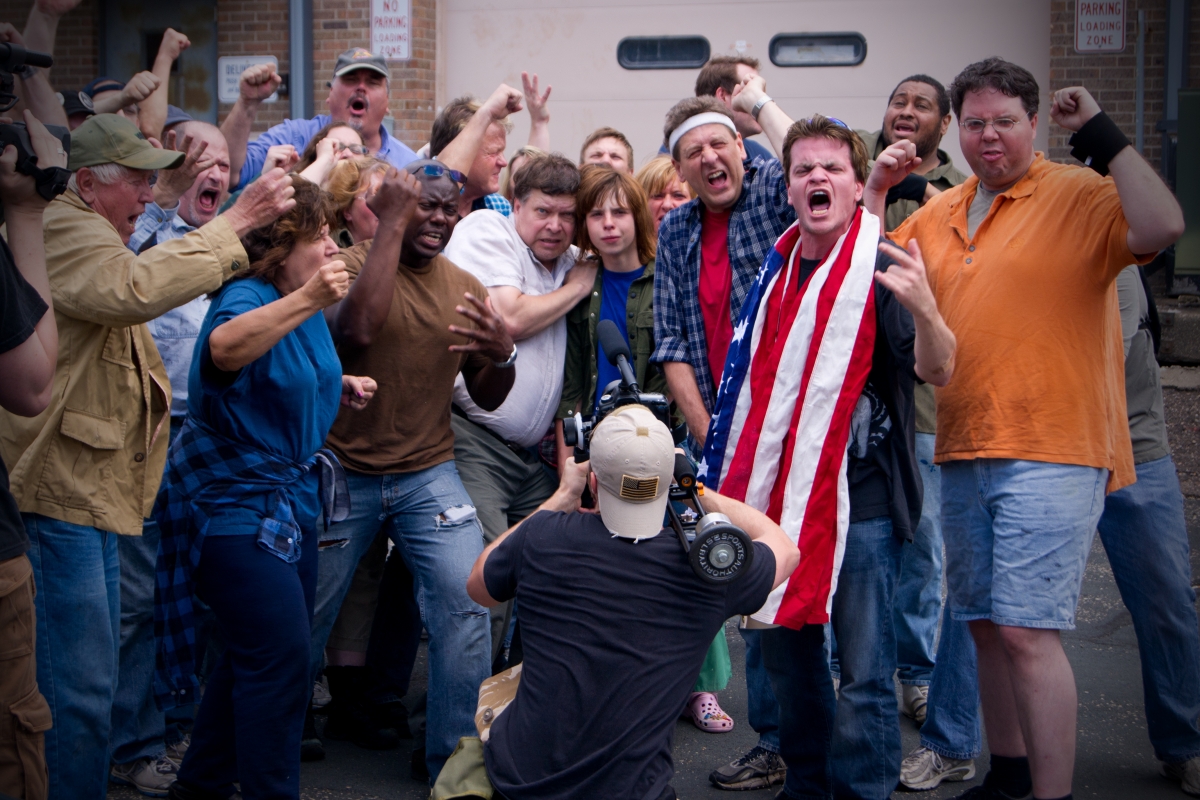 In 2010, a charismatic, Minnesota-based Iraq War veteran named David Crowley began work on his debut film project, a paranoid action film about a United States taken over by martial law. He called the project Gray State, and when he posted a dystopian, high-production-value concept trailer for the film in 2012, it struck a chord among libertarians and anti-government activists. It has since been viewed nearly three million times.

Despite copious crowdfunding support and a hungry fanbase, the film was not completed. During Christmas week of 2014, Crowley killed himself, his wife and their young daughter.

In the new documentary A Gray State, filmmaker Erik Nelson—who produced several of Werner Herzog's recent documentaries, and Herzog serves as an executive producer here—navigates the copious materials that Crowley left behind, piecing together a gripping, mysterious portrait of a family victimized by a confluence of violent mythology.

Nelson spoke to Documentary on the eve of the film's theatrical release.

Did Grizzly Man's Timothy Treadwell and A Gray State's David Crowley strike you as similar figures?

Yes, they did. They both were gifted native filmmakers who unwittingly documented their own death spiral. With Grizzly Man, originally, I had developed the project and found the material for me to direct as a feature. I made Werner [Herzog] aware of the story because I thought it would make a terrific feature film with Leonardo DiCaprio playing Treadwell, because DiCaprio was a member of Treadwell's "Grizzly People"— one of his backers.

I felt any actor would leap at the chance to be in a Herzog film. So, I gave Werner the material and said, "You really ought to pursue this as a feature." Werner asked, "Well, who's directing the documentary at the time?" I said, "I am," and Werner said, "I would like to direct it." I had this flash where I could have directed a good film, but with Werner I might potentially be able to produce a great one. It was a very easy decision.

When the Crowley material came up, this one I wasn't going to give away to anybody— certainly not to Werner. But Werner and I have kept close; I've done four feature films with Herzog and we’re fellow travelers. As he puts it, we're co-conspirators. When I showed him the film, he really responded to the first cut.

I then asked him if he would be interested in coming on if I officially give him credit for his comments and notes. That's when he came on as executive producer. There is a circle being closed here.

How did you piece the story together?

I was given everything. I was given 23 terabytes of all of Crowley's Gray State material and whatever else was on his personal drives, plus all the contents of his personal iPhones and family pictures, plus the entire contents of his laptop and passwords. It took a three- or four-month period to slowly go through all of the material. As I went through it, I started finding what [Stanley] Kubrick called "non-submersible units"—these things that were just so amazingly powerful that I knew you could pin a narrative on top of [them].

I approached this very novelistically, started at the beginning knowing that I wanted to show some of these striking bits, and laying it out. It was a very organic process, but it required a lot of screening and a lot of immersion into Crowley's worldview and madness.

Were you making the film with the support of the families?

Absolutely. Well, "support" is a tough word, but with the cooperation of the family.

I feel I delivered on what I promised them. I told them it was going to be a film that …they would never like it, but after seeing it they would have a better idea of what happened. If not to put their mind at rest, at least they would have some idea of what was going on, because the police never went through the drives, never went through the material. To them it was a forensic case: Did he do it or did he not? The who-did-it was important to the police, but why he did it was of no concern to them.

What do you think Crowley supporters were responding to when they saw the Gray State trailer?

Everything. Crowley consciously wanted to create in the trailer all of their nightmares. He knew what this movement thought might happen if the New World Order takes over the country. So, he basically created a greatest-hit reel of every single one of their nightmare fantasies.

When they saw those fantasies realized within this action movie, in vivid form, they responded. He basically reproduced their nightmare. In this current fragmented paranoid culture of this country, if you can deliver on people’s worst fears you're going to get an audience. Crowley went right for it, steered right into that curve.

Did Crowley make a strong distinction between reality and fiction?

It was a work of fiction insofar that he had characters and [a "hero's journey"]—the Joseph Campbell, the stuff that was on his "wall of crazy" certainly suggest he was interested in a personal story distinct from the political. The belief in the Gray State, the belief in the New World Order, this distrust he had for the government I think stemmed from his experiences in Iraq and Afghanistan.

That was hardwired into his personality, distinct from his film. What Crowley did, I think somewhat uniquely, was that he was a true believer who was also a gifted filmmaker and he harnessed the two. Just like secular filmmakers are making a lot of money at the box office with "religious narratives" or "religious documentaries," Crowley recognized that there was a niche market for films that brought these fantasies or these beliefs to life.

He says, "All I have to do is say the word 'New World Order' and they get out their wallets." He absolutely was cynical in reaching out and seeing a way of selling his vision, but he also believed it. He wasn't a carpetbagger, he believed his message.

The Crowley story also appeared as a New Yorker article by Alec Wilkinson this past April.

This is key to this: This documentary and this New Yorker article were co-investigations. Alec and I did our investigation in tandem, informing each other, which is somewhat unusual.

This wasn't an official documentary developed officially with The New Yorker. It was much more informal. Alec and I compared notes all along. Alec became fixated on the written journal, which he felt and still feels is an absolutely extraordinary document where a guy literally writes his descent in to madness. From a literary standpoint, Alec was fascinated with it.

I was fascinated with the raw material. So, Alec kind of went down the journal route and the story route and I went down the [route with] Crowley telling his own story through his images and what he's saying on the wall. It's clear he's talking about himself. So, when we got the official go ahead, we went to Minneapolis together and told the family that between The New Yorker and Alec's considerable talents and my considerable talents, we would give them as good as snapshot, as good an investigation as is possible to give. I think we succeeded in that.

Did you worry about the timing, with the New Yorker piece coming out several months before the Gray State theatrical release?

No, I wanted the timing to be exactly as it was. I wanted the article to come out before the film to kind of inoculate people to the story. If The New Yorker comes in on a story, by nature that means it's worthy of mass attention. I knew that the story was going to get national attention sooner or later. I was shocked that no other filmmakers were chasing it, and no one seemed to be on it from the national media until I alerted The New Yorker to it.

Once The New Yorker was on it, I knew that would kind of scare away any other journalist. It was a very tactical decision of mine to bring in The New Yorker.

How has the community that supported Crowley's Gray State reacted to your film?

Well, again, there's a lot of controversy around the film. The Crowley family and friends and the people who David actually know are pretty much 110 percent behind the film after seeing it. They find it hard to watch and there are tears during the screenings, but they’ve seen it multiple times and they're oddly very okay with everything, which I'm surprised at.

The conspiracy culture, if they give the film any thought, or the case any thought, they think it's absolutely a piece of compromised propaganda engineered and created solely for disinformation. In essence: I'm a member of the new world order and this entire film is a hit job to discredit David Crowley. That’s pretty much absolutely what they think. There's nothing much I can do. They haven't seen the film yet, but that hasn’t stopped them from forming a definite opinion on it. I'm sure when they see the film they will be a thousand "Why didn’t you talk about this?" [questions]. There's literally no way to address those kinds of notes or concerns, but I find it interesting that to this date there's a lot of controversy about a film that no one has seen yet.