Full Frame 2021: Something for Everyone, Online Only 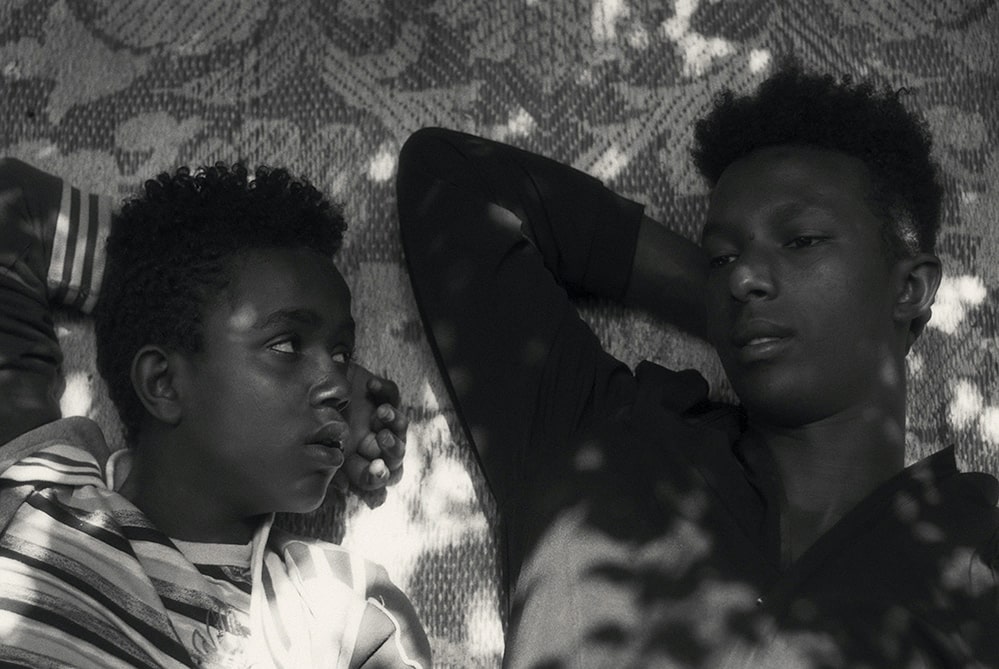 Full Frame Documentary Film Festival, now in its 24th year, has become a notable stop on the circuit, not least for its homey welcome to filmmakers, its ease of navigation, its events, and its wealth of carefully curated offerings. This virtual, pandemic version was a valiant effort to maximize the possible and dispense with what could not be substituted. It featured an eclectic mix of coming-soon-to-a-streamer-near-you work, slow cinema, and the downright experimental.

As Artistic Director Sadie Tillery explained, this meant shrinking the fest strategically. The retrospective strands, thematic program, tribute, and invited program of new films screening out of competition all disappeared, cutting the festival by more than half. The remaining mix of 21 features and 15 shorts, all in competition, featured six world premieres and nine US premieres. Tech was seamless. Pre-recorded filmmaker Q&As, typically 25 minutes long, were content-rich, well-designed, and easy to access. The festival also featured seven awards, with prizes totalling almost $50,000. And there was only one event—and it was an important one.

The value of documentaries as a site of investment, whether because they lend prestige (awards) or return profits, was on display with some of the bigger-name premieres. Nanfu Wang’s most recent film, In the Same Breath, looks at the way both the Chinese and US governments handled the arrival of COVID-19, from her own family’s perspective. When news broke, she was actually visiting family 200 miles from Wuhan. Horrifying to this staunch human-rights advocate who has courageously critiqued the Chinese government, she finds the US government also incompetent, unreliable and propagandistic. Look for In the Same Breath soon on HBO.

At Sundance, Amazon snapped up My Name Is Pauli Murray, from Julie Cohen and Betsy West, the team that brought you RBG. The film won Full Frame’s Kathleen Bryan Edwards Award for Human Rights, with a $5,000 prize. With African-American writer/producer Talleah Bridges McMahon and African-American writer/editor Cinque Northern, the two white directors have created a biography of Pauli Murray, an extraordinary "hidden figure" in American civil rights and gender rights history. With luck, this film will get Murray back into the popular history of the eras she helped to create and define.

Storm Lake, destined for PBS’ Independent Lens and benefiting from ITVS funding, comes from the veteran team of cinematographer/director Jerry Risius and producer/director Beth Levison. Risius is noted for his intuitive vérité photography, and it’s beautifully on display here. The Storm Lake Times is an Iowa-based local newspaper that won a Pulitzer Prize for exposing corruption between the agriculture industry and county government. The directors take you inside the family operation, where Art Cullen, the patriarch, is the editor; his wife, Dolores, is the photographer and feature writer; their son Tom is lead reporter; Art’s brother John is publisher; and his wife, Mary, is the food writer. They write about everything from school events to farmers’ problems to immigration to recipes. Every week, Art writes an editorial that is often a stirring defense of journalism as a bulwark of democracy. It’s a survival struggle each week, and it doesn’t get easier during the pandemic. (John was already taking no salary and depends on social security.) The star is indubitably Art, who has become an internationally sought-after commentator, who commands the verbal version of the well-honed twinkle in the eye. The entire family makes an incredibly congenial cast of characters, and they collectively make a strong case for local newspapers at their best. They also make the case that without subsidy, local reporting is and will be ever more difficult to sustain.

Possibly the glossiest of the premieres was Television Event, backed by Impact Partners. Director Jeff Daniels traces the making of The Day After, the 1983 fiction TV film that imagined the immediate aftermath of nuclear war. It drew record ratings and, the film argues, changed President Ronald Reagan’s mind about "peace through strength" and led him to negotiate nuclear disarmament with the Soviets. Extended interviews with The Day After’s director, Nick Meyer (who hewed to a "don’t mess with the artist" position), and ABC producer Stu Samuels (representing the "broadcasting is a business" case) are intercut in ways that manufacture a stimulatingly acrimonious conversation between them. Archival material of Brandon Stoddard, the network executive in charge of the project, fills out the personalities involved. Stoddard had decided to go for something controversial, and stuck to his commitment even after the White House told him not to run it, or at least make changes. Daniels also found rich caches of other archival material, including citizen-filmed on-set footage and broadcast clips of stunned groups of viewers watching the film. The story is fascinating in describing how productions were made in the three-network era, the power of storytelling, and the enduring terror of nuclear disaster. The relentlessly incisive editing by Eileen Meyer and Aaron Wickenden, which routinely turns archival and interview material into impactful scenes, makes the film, and also leaves you with an awareness of how manufactured the reality we take for granted on screen actually is.

These films leverage Full Frame for marketing and publicity before their release, and Full Frame gets the prestige of hosting premieres. But as streamers increasingly shorten the window between festival and release date, and play fests off against each other, you have to wonder how the festival ecology is changing and to what end. Festivals have traditionally been places to showcase and discover films that were offbeat and different. What’s the perk these days for someone to see a film that days or weeks later shows up on their feed?

But fests also let you see different approaches to a topic. Two films dealt with the lives of high school students. Pete Nicks’ Homeroom was making another stop on the festival circuit, after a Sundance launch. It’s the third in his trilogy about daily life in Oakland, where the institutional inequalities and injustices of American society present in a distinctive way. He follows a group of particularly politically active students who demand an end to policing in schools, as a way of coping with budget cuts and addressing police injustice. Amazingly, they win. Keep your eye on Denilson Garibo, the lead organizer; he has a political future, unless America can’t figure out how to deal with undocumented immigrants. As always, Nicks doesn’t have to underline his takeaways; the storytelling does the work. The intimacy of the scenes, and the extraordinary access, bespeak the established trust Nicks and his team have built up in Oakland. Homeroom premieres August 12 on Hulu.

Scenes from the Glittering World, by contrast, never convinces us that the three Navajo Nation high school students it tracks are comfortable with the makers. The white directors, Jared and Carly Jakins, came in following up on a newspaper article about a local robotics team but pivoted to a daily-life-of-teenagers story when that didn’t pan out. They also engaged a non-Navajo Indigenous producer, Roni Jo Draper, from the Yurok tribe in Northern California. The best news is the film’s, and the students’, appreciation for the beauty of their homeland.

Another thing festivals can do for us is to bring work that is unlikely ever to be showcased in a mainstream broadcast/streaming environment, and even potentially to create a niche interest in it. Faya Dayi, by Ethiopian artist-in-exile Jessica Beshir, is slow cinema par excellence, and launched its festival tour at Sundance. At Full Frame, it won two awards: the Reva and David Logan Grand Jury Award ($15,000) and the Center for Documentary Studies Filmmaker Award ($7,500). Beshir, whose photographic compositions are extraordinarily compelling, created a black-and-white portrait of daily life, seen through curtains and veils, at angles and in flickering light, in her home village. There, villagers produce khat, the mild stimulant widely used in the Middle East and traditionally a route to spiritual insight, particularly for Sufis. Now, villagers use it to wile away days and years, in an economy and society without jobs, future or hope other than the grueling prospect of human smuggling into the European underclass. This was one film I felt suffered by its virtual presentation; I imagined a far more transportive experience watching in the dark with other viewers who’d made a commitment to slow cinema together. The film opens in theaters on September 3 through Janus Films.

By contrast, Meanwhile on Earth, a Swedish-Estonian production with investments from European public TV, had a quiet, dark humor that carried well over to the little screen. Director Carl Olsson phlegmatically creates tableaux capturing the work of funerary workers—the bodies, the coffins, the elevators, the driving, the shoveling—with some glimpses of their out-of-work lives fishing, visiting relatives, and talking about lunch. The camera is always on the workers; we barely see a body, and never a mourner (although sometimes the workers complain about them). I’m sure this will find a home on European public TV channels, and have ancillary uses as well. It certainly does a good job of showing funerary work as a business with its own rhythms (although this would be a very different film if Olsson had shot during COVID in any of the hot spots).

Looking for a BIPOC Editor?

Full Frame’s one event was an absolute standout. The Alliance of Documentary Editors, with a variety of partners, created an elegantly designed and edited hour-long presentation of its just-launched database of BIPOC editors. They just raised the standard for virtual presentations for all of us. The database itself is also elegant and easy to use; you can use a variety of filters to search for editors, and can add your name too, if you’re BIPOC. And a roundtable of lived experience among mid-career BIPOC editors made the case for a need to expand the pool.

The event also featured legends in the field. Sam Pollard recalled how lonely he was, starting out, often as the only Black editor in the room, and how he’s now mentored three generations of editors. Jean Tsien, who arrived in the US as a tween immigrant and followed her passion, building a network and reputation all the way, gave advice to aspiring BIPOC editors: "Go to the festivals and the parties, take any job, get the reel." And she advised producers, "Don’t treat us like window dressing. Hire us as editors, not assistant editors."

Keynoter Lillian Benson, whose career has informed so much legendary work, including Eyes on the Prize, Maya Angelou, and Still I Rise and 80 other films, had much good advice. She urged white people to mentor BIPOC editors, as BIPOC editors have for decades, and give positive as well as negative feedback. She called out common lies such as "BIPOC editors can’t be objective on BIPOC topics," and "BIPOC editors are incompetent." She asked BIPOC editors to treasure and celebrate the people who mentor and give you the support to keep going. And she closed with three words: "Lead with love."

END_OF_DOCUMENT_TOKEN_TO_BE_REPLACED

Bare Bones Full Frame 2022: The Limits and Benefits of Virtuality