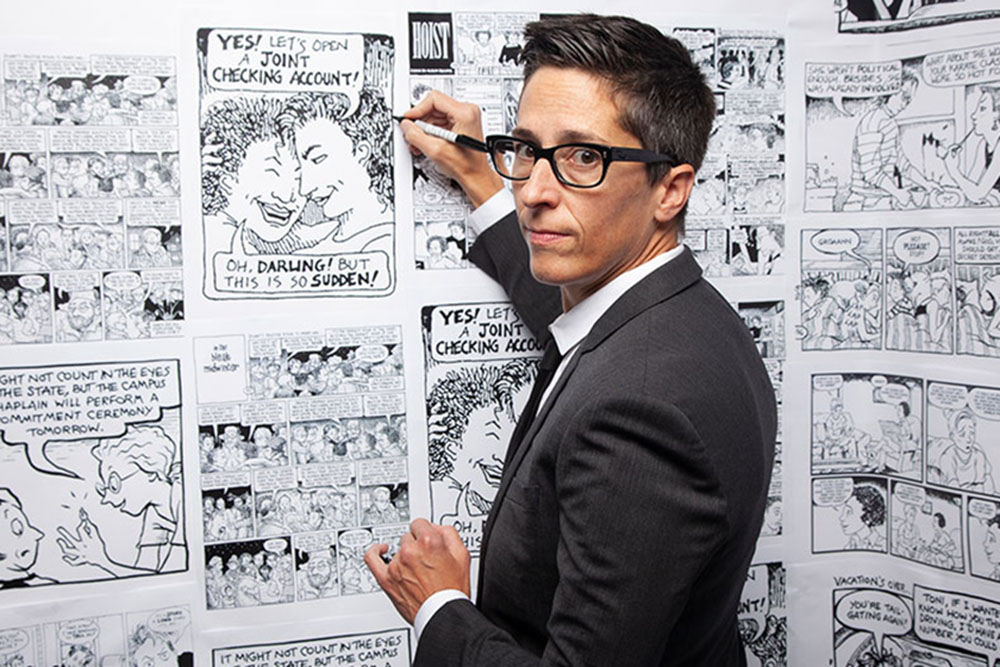 Each year, the Outfest Los Angeles LGBTQ film festival hosts some of the best queer and transgender cinema in the world. It’s a chance to catch films that were misunderstood by straight programmers or rejected by festivals because they were “niche.” But more than any of that, festivals like Outfest provide a much-needed space for community, both for filmmakers and enthusiasts. This year, more than ever, we needed this space to celebrate the stories that don’t fit neatly in a box and reject straight sensibilities.

Each year a new powerful slate of documentaries changes the way we look at history from a queer perspective. 2021 was no different, with several important films that reaffirm the reality that we wouldn’t be here without queer and trans people. Julie Cohen and Betsy West’s My Name Is Pauli Murray is an excellent example of this. The slow but passionate documentary is a love letter to Pauli Murray, a name that everyone should know. The film tells the story of the non-binary, queer civil rights advocate and shows how important their work was for the empowerment of Black and LGBTQ communities.

No Straight Lines: The Rise of Queer Comics, which won the Documentary Grand Jury Award at this year’s festival, was easily a favorite. Director Vivian Kleinman’s debut feature documentary sheds light on the colorful history of queer comics like Alison Bechdel, who created the comic strip Dykes to Watch Out For and graphic novel Fun Home, and Rupert Kinnard, the artist behind the first African American LGBTQ characters in comics. The documentary balances humor, history and craft in its deep dive into the incredible stories of the queer godparents whose legacies continue to inspire LGBTQ comics of today.

Striking a much different tone, director Michiel Thomas’ Gemmel & Tim explores the disturbing and tragic deaths of two gay Black men, Gemmel Moore and Timothy Michael Dean, in the home of political donor and activist Ed Buck. The world premiere screening felt deeply personal, taking place at the Directors Guild of America Theater, not too far from the West Hollywood residence where these deaths occurred. The film expertly chronicles the pain and anger of a community plagued by a truly evil man and government officials who refused to help. While the film takes a fairly standard, journalistic approach to the case, it stands out in its dedication to honoring the lives of these victims through the voices of those who cared about them the most.

A Dynamic Showcase of QTBIPOC Shorts

The stories of queer and trans BIPOC people stood out this year among the crowded field of shorts at Outfest. At a time when white gay men like Pete Buttigieg are having a moment in politics, Whitney Skauge’s The Beauty President reminds us that Black gay people did it first. The film recalls the neglected history of Joan Jett Blakk, a Black drag queen who ran for president in 1992. The beautifully composed, dream-like short earned for Skauge and protagonist Terence Smith the Special Programming Award for Freedom.

Another short that impressed was Emory Chao Johnson’s F1-100, which received a Documentary Short Special Mention. The experimental hybrid documentary focuses on a trans art student from Malaysia studying abroad in the US while beginning his journey of taking testosterone. As COVID forces him to attend school from home, he faces an unaccepting community and an uncertain future about his transition. The film mixes gripping animation, archival and vérité footage that emulate the complex emotions and dreams of the subject, putting viewers in an otherworldly space.

In a year that has been truly exhausting for trans people, between the isolation of the pandemic and the many attacks on the rights of trans people across the country, the narrative at Outfest struck a hopeful and resistive tone. Each year Outfest hosts a Trans and Non-Binary Summit that holds much-needed space for conversations around not just representation but a celebration of the trans experience in front of and behind the camera. This year the conversation felt deeply cathartic.

“The most compelling work is about reevaluating the importance of pleasure,” said filmmaker Tourmaline, the keynote speaker at this year’s summit. Her speech was a plea to the trans community to reject the fallacy that struggle is a necessity in art and instead embrace the pursuit of joy that exists in trans and non-binary community spaces.

The summit also hosted a panel of trans and non-binary filmmakers, including Zackary Drucker, filmmaker and producer of docu-series such as This Is Me and The Lady and The Dale. Her message was to begin the process of moving past respectability, which she says was a response to the over-correction of having no representation, and embrace the imperfect trans narratives that are true to the history of gender-expansive people. “As a person coming out of a counterculture history, I was never really that fascinated by the culture of respectability; I craved those stories of outlaws and badasses,” said Drucker. Her message is evident in works like The Lady and The Dale, which tells the story of a trans woman with a long, complicated criminal history.

Answering Drucker’s plea for complex trans narratives was another favorite at this year's festival. North By Current, which received a Special Mention from the Outfest Documentary Jury, dives headfirst into the complexities of family, being trans and the imperfect human experience. A powerful and gritty vérité portrait, the film could have easily been a true crime narrative, but instead, director Angelo Madsen Minax goes beyond the surface-level issues facing his suburban white family and delves into its messy and uncomfortable realities, glossing over nothing. The result is a deeply moving, experimental portrait of a family in middle America that you can’t help but root for, warts and all.

END_OF_DOCUMENT_TOKEN_TO_BE_REPLACED

Revolutionizing Representation in Documentary: The Making of 'Disclosure: Trans Lives on Screen'