Requiem for a Yippie: "Left on Purpose" Shifts from Portrait to Last Will and Testament 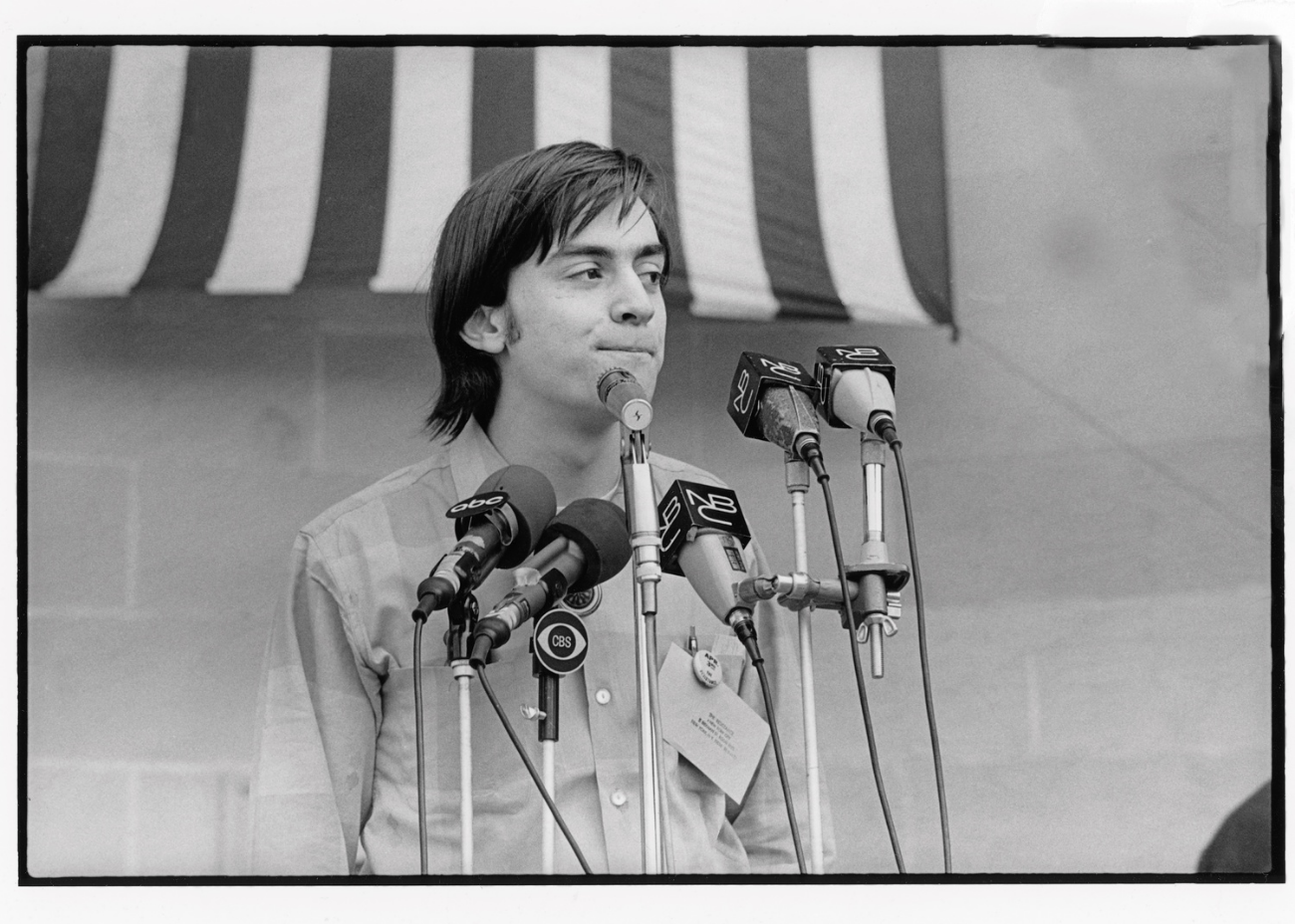 When director Justin Schein began making a film about the aging political activist and colorful Greenwich Village mainstay Mayer Vishner, he was primarily hoping to bring attention to an underappreciated Zelig of the left. In the late 1960s, Vishner had served on the front lines of the theatrical, anti-authoritarian Yippie movement, collaborating closely with Abbie Hoffman and Jerry Rubin without ever grabbing the spotlight.

But after visiting Vishner's filthy, cluttered apartment, Schein recognizes that he's dealing with a lonely, clinically depressed, alcoholic shell of a man. In his forthright style, Vishner declares that he has nothing left to offer the world, and that he's ready to move forward with his long-planned "Existential Project": committing suicide.

The filmmaker is thrown into an agonizing ethical dilemma: He doesn't want to bear witness to - or worse, enable - his friend’s death, but he suspects that participating in the documentary may be the only thing keeping Vishner alive. Schein eventually decides to keep filming, in an attempt to convince his friend to share his political legacy and continue the struggle.

Left on Purpose, which Schein co-directed with David Mehlman, is a bracing, unsentimental and strangely entertaining reflection on the politics of death, and what it feels like to outlive your ability to make a difference.

Documentary spoke to Schein and Mehlman the week before their film's US theatrical release.

What was the film you originally envisioned? Why was Mayer the protagonist of that film?

Justin Schein: I had met Mayer while working on No Impact Man. He was this local activist, community gardener, and we got to be friends, and I started to learn about his history. And having grown up at a time where I look back at the '60s civil rights and antiwar movement with a certain longing, I saw him as this great opportunity to better understand that movement. Then he took me to his house. I saw that he was really in a very different place, and I wanted to try and reconcile that. I saw it as a short film about the Yippies, and aging and activism. I didn't see what was coming.

Once the film's subject changed, was it difficult for you to trust the process? Have you ever put yourself in front of the camera before?

JS: No, I had never narrated a film or been anywhere close to the subject. So it was difficult. But I really had to take pause and think about…If I were to go forward, I felt like I couldn't hide behind the camera. There was too much ethically in question, and clearly he was speaking to me, making a plea, and I wasn't sure what it was - whether it was a plea for help, and whether help meant helping him kill himself, or helping him to get better. Clearly I was a part of the story. As a filmmaker, those issues of ethics exist in every film, but this was to the tenth degree, and I needed to examine my role in it.

I certainly sought a lot of counsel in the making of this. I filmed myself talking to ethicists and lawyers and other doctors, trying to better understand my position. That didn't really make it into the film, but it was an important part of the process.

The film is pretty transparent about its construction, but I didn't know there was a co-director until the end credits rolled. How did this collaboration work?

David Mehlman: I certainly knew what was happening over the first few years it was being filmed, but I wasn't involved officially. Maybe five or six months before Mayer died, we decided to go in together and work on it, not knowing what the end was. Justin had a couple-hundred hours of footage, plus archival. Because of Justin's own closeness to the material, and emotional commitment and exhaustion, he said, "I don't know what to do with all this. It's gone in so many different directions. I need you to partner with me."

JS: I needed his perspective and his skill. I'm not an editor. It was definitely a collaboration.

DM: I took on the role of perhaps being a bit of a skeptic, having the distance to figure out more objectively what was happening, and acknowledging Mayer's manipulation or savviness, and Justin's difficult position, and also his own will to tell the story that he thought was important.

Why do you think Mayer wanted his story told? Was he thinking about inspiring activists? Did he see it as a cautionary tale? What sort of film do you think he was expecting?

JS: I think it's complicated. There's a certain degree of narcissism involved - his desire to be remembered as a historical figure because he spent so much time at Abbie Hoffman's side, uncredited. But I also feel that in some ways he kind of donated his pain and his experience because he wanted people to better understand the process of living with depression. And he wanted to make the case for his right to decide not to go on. As a Yippie, he saw an opportunity to make a spectacle and make a point, but I think he really opened up his life in a way that was very brave.

DM: At the end of the day, Mayer got one of the things he really wanted, which was a film made about him, but in the process we learned more about him than he necessarily thought he was [going to share], although he was certainly very open throughout the process.

How did you negotiate filming Mayer's doctor’s visits and therapy sessions?

JS: Pretty early on, Mayer's doctor, Dr. Schiller, agreed to let us film. We got really lucky to have someone who knew Mayer and respected him so much and saw the value of both sharing this experience - he was frustrated by the limited amount of tools he had to help someone in Mayer's position - but he also felt that the film in process was good for Mayer. That helped me decide to move forward.

With the therapist, that was a process… Mayer, in some ways, insisted upon it, but I didn't get a release from the doctor until after Mayer had died… It was good for me to be in that process with Mayer; I was probably there a dozen times.

Mayer describes his suicide as his final political act. Do you find his statement convincing on any level? What do you think he meant by that?

JS: For the most part, that was a political layer that he put on top of his depression. I think he was driven by clinical depression and alcoholism. Certainly there were contributing factors. The fact that Abbie Hoffman and Phil Ochs and others in the movement that he was close to took their own lives kind of helped give him permission. He was a Yippie, and when he was told he couldn't do something, he saw it as an opportunity.

DM: The political act was not one of his top three reasons for making the film. But I feel like he did want the politics of his life acknowledged. Given that he felt like he had become an anachronism, that the Village had turned into a mall of expensive stores, and that all of the tools he used for activism had all been co-opted or were gone. It was something he strongly wanted to remind people of.

What my experience watching Mayer really made me think about was the politics of aging. He makes a pretty good argument, saying, "I'm done, the way I'm feeling is not going to get any better. Why should I be forced to live if I know my trajectory is only going down?" These were things that I had never thought about. It's really what the film is about. Aging and loneliness and how our society discards people after a certain age.

Your film already feels like a period piece. It takes place during the Obama era, which in retrospect feels like a dormant moment for the Left. How do you think Mayer might have responded to the particular political moment that the film is being released into?

JS: I think about that all the time. On Election Day, I was thinking about Mayer. My first reaction was remembering that Mayer saw everything as not just positive or negative but as an opportunity. He would say there are always unintended consequences. And I thought about the activism that my kids would be involved in for the next four years, and how that will shape their lives in maybe a positive way. And I think that Mayer, if he were feeling up to it, would be very engaged. He's definitely sorely missed.

DM: I think the film perhaps, as a period piece in this new era, could be seen as a cautionary [tale]. Nobody should give up and feel like they have nothing to contribute. Because now we need all that wisdom, for sure.

END_OF_DOCUMENT_TOKEN_TO_BE_REPLACED

A Question of Ethics: The Relationship between Filmmaker and Subject

How Close Is Too Close? A Consideration of the Filmmaker-Subject Relationship