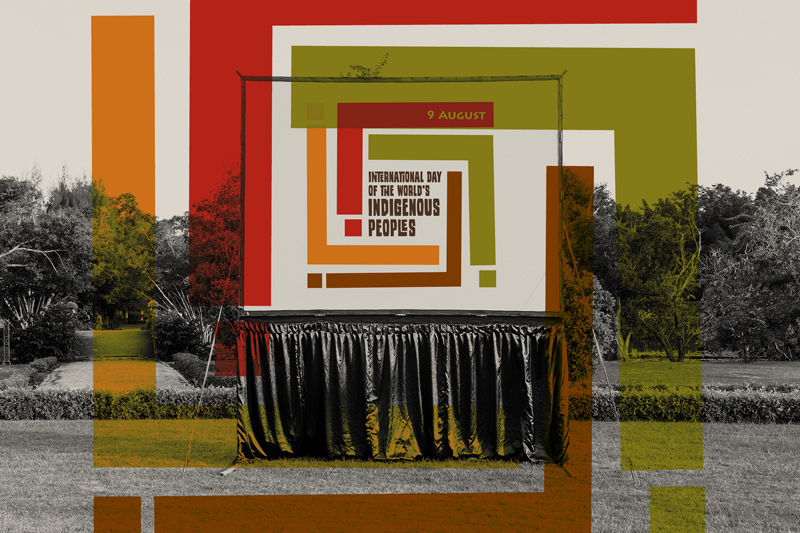 If every documentary tells a story, then one of the most critical issues in our community today is who gets to tell that story, and to whom. IDA has engaged in debates surrounding self-representation and power dynamics in storytelling for a long time–from discussing the pressing need to decolonize docs to “the inequity of unchallenged filmmaker bias and motives, of the chasm between the subject and audience (and) of film as a tool of racialized colonial power and empire.”

August 9 is recognized as International Day of the World's Indigenous Peoples. While documentaries have attempted to increase public awareness, our knowledge of these communities that have historically been misunderstood, disenfranchised or treated with violence, remains limited. This International Indigenous Peoples Day, we’re shining a light on a few documentaries that center stories about indigenous lives, told by indigenous creators. However, an important caveat here is that this is not a comprehensive account of indigenous storytelling across the globe. There are few indigenous-created documentaries to stream online from non-English speaking countries, primarily across Asia, Africa and Latin America, and resources to aid this search are scarce as well. As the issue of white perspectives in indigenous documentaries remains an ever-present issue, it is critical to focus on narratives written or directed by indigenous filmmakers themselves, if not filmmakers from the country in question, while pushing for the elevated presence of indigenous perspectives from non-English speaking countries on SVOD platforms.

Furthermore, International Indigenous People’s Day is a fitting day to reflect on the evolving meaning of “indigenous.” Consider New Moon, Philippa Ndisi-Herman’s cinematic, self-exploratory vision of how an enormous port project disrupted the lives within a small, traditional Sufi Muslim community in Lamu, an island off the coast of Kenya. Or, recent Mexican documentaries that deal with US-Mexico immigration such as Bad Hombres (dir. Juan Antonio del Monte, Rodrigo Ruiz Patterson) or El guardián de la memoria (dir. Marcela Arteaga). These films are grounded in their subjects’ sense of belonging, home and identity, and how the three are uprooted and thrown into chaos by external forces. As documentaries keep fighting the uphill battle of meaningful inclusivity in the 21st century, let’s take time to watch the films listed below, while also amplifying documentaries about dwindling communities and their relationship to place and space.

The first female indigenous filmmaker from New Zealand, Merata Mita’s filmmaking is largely responsible for raising worldwide awareness of the Maori––indigenous Polynesians residing across New Zealand, Mita’s groundbreaking films such as Patu! And Bastion Point: Day 507 were instrumental in documenting anti-apartheid protests and injustices against her country’s indigenous populations. After her death, her son Heperi Mita compiled years of rare archival footage and home video to weave this poignant story of Merata Mita’s life and relentless commitment to telling her community’s story, all while being a compassionate, supportive mother.

Written and directed by Inuk filmmaker Alethea Arnaquq-Baril, Angry Inuk is a breathtaking look at the traditional seal-hunting practices of Inuit communities residing in remote Northern Canada territories such as Iqaluit and Kimmirut. While showcasing the rich tradition of this practice that is essential to the community’s survival, the film also finds the director herself, along with Inuit seal hunt advocate Aaju Peter, attempting to overturn the detrimental EU Ban on Seal Products policy.

Most people’s perception of Native Americans, whether they’re in the United States or anywhere else in the world, is shaped by the caricatures portrayed through Hollywood stereotypes. Cree filmmaker Neil Diamond deconstructs these characters—often played by white men in big-budget films—to get to the root of these seemingly harmless yet deeply racist tropes that have been central to the mythos of classic American cinema, and how we must examine the representation of these lives on screen to understand the United States’ own fraught relationship with its Native communities.

Through more than half of the 20th century, the Australian government engaged in the heinous act of displacing Aboriginal families by taking tens of thousands of young girls and forcing them into domestic servitude for white families. The impact of this policy has been intergenerational, with many Aboriginal women enduring mistreatment at the hands of their employees but unable to report these crimes to authorities. Servant or Slave, by Hetti Perkins, is a timely retelling of Australian history through the lens of five women who display remarkable courage in seeking justice and sharing their stories with wider audiences.

The Circle Sun is a short film from 1960 that captures the Kainai Nation of Alberta and their traditional Sun Dance custom on film for the first time, and does so in a captivating, lyrical fashion. While the very first part of the film is narrated by Director Colin Low, the majority of this story is told by Pete Standing Alone, an indigenous man from the Kainai Nation. This is perhaps one of the first times an indigenous voice is heard on film, and Pete Standing Alone’s life as an oil rigger, cowboy and rodeo rider became the embodiment of tribal values reckoning with the modernization of the American heartland. It was the subject of many more films produced by NFB and Colin Low, which can be found here.

WATCH: National Film Board of Canada

Before Don Chelino passed away in 2014, he was the last surviving elder of the Nahuat-Pipil, one of the only indigenous peoples native to El Salvador. For 46 minutes, Director Sergio Sibrián creates a beautifully intimate portrait of the elder as he plays the Pito De Carrizo, a reed whistle, and passes on this surviving vestige of his indigenous musical tradition to a younger apprentice. As the young man learns to preserve his heritage, Don Chelino recalls the historic 1932 uprising and subsequent massacre of tens of thousands of peasants carried out by the El Salvador government—an event that came to be known as La Matanza. The film is a poignant reminder of the grave injustices that have caused the extinction of indigenous communities, and how oral history remains as one of the strongest ways to revisit these events.

Filmmaker Abhijay Karlekar takes viewers to Jharkhand, which has been one of the poorest and least supported Indian states since the country gained independence in 1947. The state is also home to many Adivasis, a catch-all term referring to India’s myriad indigenous populations. Primarily an agricultural population, the Adivasis continue to go up against huge nationally-funded initiatives as industrialization demands a greater turn towards mineral excavation in the state. Karlekar provides an intimate and analytical account of these conflicts in one of the only widely accessible documents of this diminishing indigenous population.

Jaime Martínez Luna, better known as Uncle Yim, is one of the most influential indigenous thinkers from the Oaxaca region of Mexico, and was largely responsible for expanding the lexicon surrounding indigenous lives in Central America. The highly enigmatic philosopher, artist and activist spent nearly 15 years suffering from alcoholism. Written and directed by his daughter, filmmaker Luna Marán, in the aftermath of that period, Tío Yim is much more than an account of this prolific indigenous and political figure–it is also a deeply emotional story about fatherhood and family. The film is enriched with the beautiful natural landscape that Luna has spent almost his entire life surrounded by.

More resources for staying up to date on the world of Indigenous documentaries...

END_OF_DOCUMENT_TOKEN_TO_BE_REPLACED

'The Native Americans' Docuseries: An Interview with Filmmakers Phil Lucas and Hanay Geiogamah