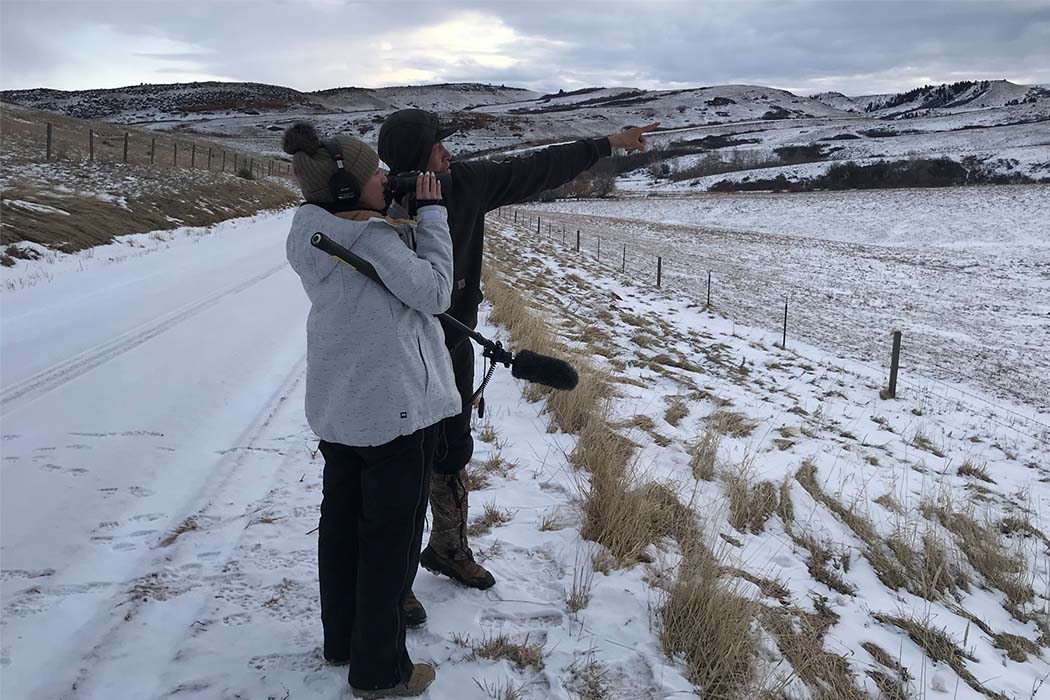 Every November, for Native American Heritage Month (NAHM), the US commemorates the contributions, culture and history of Native people. It is also a month to reflect on how to honor the rich knowledge and stewardship passed on for generations by Native people, to which our nation is greatly indebted. Despite the long history of violence and disenfranchisement faced by Native American communities, the many issues that they continue to face today remain invisible to many Americans. Documentary films are one way to shed light on these important stories and to ensure that Indigenous voices are being not only heard, but prioritized. For this year’s NAHM, we spoke with IDA Enterprise and Pare Lorentz grantees who have told Native American stories through their films, highlighting the importance of centering the voices and narratives of Indigenous people.

What are some of your must-watch Indigenous documentaries?

Tsanavi Spoonhunter, Holder of the Sky: I always recommend Reel Injun (2009) by Cree filmmaker Neil Diamond. For me, it’s a fundamental documentary to watch because it spans decades of Native American depictions in cinema and examines how those depictions created harmful stereotypes. I was introduced to this film while I studied at the all-Native American college, Haskell Indian Nations University, and it was very transformative for me.

The most recent documentary that I watched, and strongly recommend, is This Is the Way We Rise (2021) by Hawaiian filmmaker Ciara Lacy. It’s a compelling character-driven short film that is set against the backdrop of the Hawaiian battle to protect their sacred volcano, Mauna Kea. Lacy’s creative approach to the visual style of the film really elevated and motivated the story, without being a distraction.

Amy Kaufman/Caroline Waterlow, Ring of Fire: The Life of Annie Mae Aquash: I saw Merata: How Mum Decolonized the Screen by Heperi 'Hepi' Mita recently and was dismayed that I had never learned about the the pioneering Indigenous filmmaker and activist, Merata Mita, who was the first woman from an Indigenous Nation to solely direct a film anywhere in the world. Known as the grandmother of Indigenous cinema, her films highlighted injustices for Māori people.

This May Be the Last Time by Sterlin Harjo: Beautiful, haunting and with a powerful music tradition at its core. The film tells the story of the director's grandfather, who went missing in the early 1960s after his car crashed on a rural bridge in Oklahoma, and the members of his Seminole and Muscogee community who searched for him while singing songs of faith and hope that had been passed on for generations.

Joe Buffalo by Amar Chebib: Recently I saw this short documentary, currently streaming on the New Yorker site, about Cree skateboarder Joe Buffalo and his personal journey as a residential school survivor and the solace he finds in the art of skateboarding.

What is a significant fact about the Indigenous peoples in your film that the world should know about?

TS: I’ve never had a better time filming than I have with individuals who are Indigenous. Outside of the fact that we can relate because of our similar backgrounds, what makes these moments special is their remarkable sense of humor. In the face of adverse circumstances, they often had a cunning joke to break the tension, along with a smile to accompany it. Despite colonization and assimilation’s attempts to break and destroy Indigenous culture and spirit, I see this humor as a profound act of resilience. Where most people would be bitter and resentful, I’ve found that humor has become an admirable quality that underscores so much of Indigenous life and Indigenous movements. The innate ability to make light and laughter in time of redress is something that I have always found an honor to capture.

Treva Wurmfeld, Conscience Point: The Shinnecock have resided along the shores of Long Island for over 10,000 years in the area we currently call The Hamptons. Their land was stolen from them and then desecrated to build mansions and golf courses. One of their most sacred sites is now a world-famous golf course, Shinnecock Hills, which continually hosts the US Open tournament and exploits the Shinnecock name and image while prohibiting them any access. It is home to a private elite club where the 1% continue to play golf on the graves of Shinnecock ancestors.

Since the start of your career as a filmmaker, what are some changes you’ve seen in how the documentary community approaches telling Indigenous stories? How do you think it can improve?

TS: I’m grateful to those Indigenous filmmakers that have paved a way for my generation. Without their dedication we wouldn’t have the representation we do today. To that point, I’m fortunate to begin my journey in the film industry where I’ve witnessed a shift towards valuing films where the filmmaker has ties, or an affiliation, with the community they are documenting. In the past, that’s not always been the case, especially when documentaries have followed the practices of Robert Flaherty. Many privileged outsider filmmakers were afforded the agency of telling Indigenous stories, and they have done more harm than good.

I'm appreciative of the question of authorship in the grant process because it holds filmmakers accountable to why they are in a position to tell the stories for which they’re seeking funding. Moreover, if filmmakers like myself come from disadvantaged socioeconomic backgrounds, there are specific fellowships and workshops that prioritize our access to this costly industry. This opens up space for more filmmakers who can reverse some of the damaging storylines and stereotypes that have been constructed in lieu of Indigenous representation.

What steps should non-Indigenous filmmakers take when telling Indigenous stories to ensure that the right voices are being centered and prioritized?

TW: I would encourage any non-Indigenous filmmaker who is interested in telling an Indigenous story to spend a substantial amount of time writing down their intentions and goals for the film during the grant-writing phase and then seeking feedback from established documentary institutions, labs and groups. If you receive positive notes and support, keep going; if not, perhaps reconsider your approach to what you are doing. I would also strongly suggest bringing on a member of the Indigenous group to the filmmaking team. I was very fortunate to work with Shinnecock Co-Producer Charles Certain on Conscience Point.

AK & CW: As non-Indigenous producers, we have worked hard to build relationships with the family members, friends, colleagues and community of the person at the center of our story, long before any filming began. We have educated ourselves holistically to understand the story from the Indigenous perspective and not the prevailing mainstream narratives that often promote and tell the history from a settler perspective.