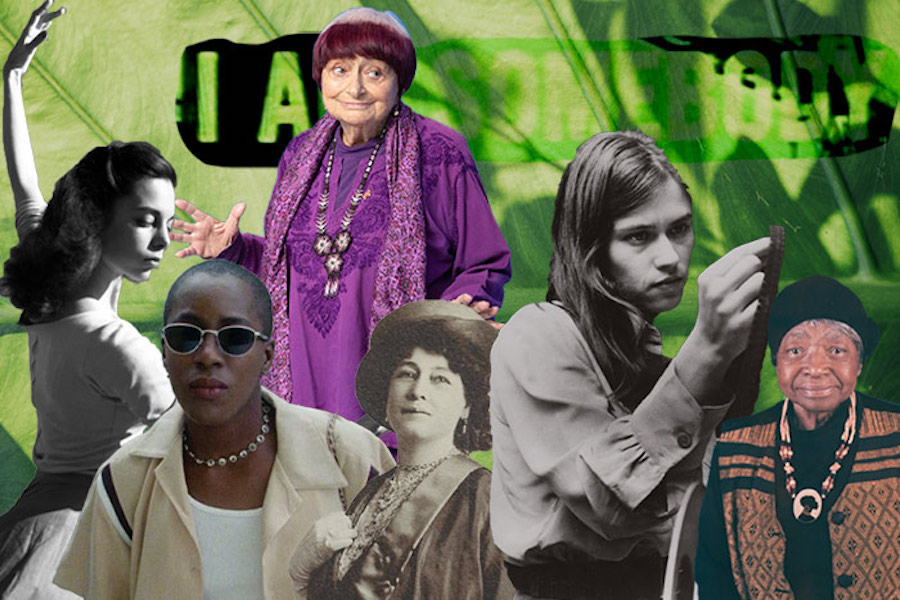 While the documentary field has only become more and more inclusive over the last few years, the more formative role of women in the documentary artform has been largely ignored, both in academia and mainstream film history. As Cynthia Close writes, in her book review in Documentary magazine of Shilyh Warren’s Subject to Reality: Women and Documentary Film, “[Female filmmakers] continue to be underrepresented and their early contributions to the genre struggle to assume their rightful place in the canon.” Moreover, the films of numerous female pioneers in early cinema, including Japan’s Tazuko Sakane, or African-American author and film experimentalist Zora Neale Hurston, are either difficult to locate or have been completely lost to time.

As conversations around decolonizing documentaries and creating meaningful modes of authorship continue through another year of reckoning, and we find ourselves in Women’s History Month, it’s an ideal time to watch some of these unmistakably important films. An important caveat to note here is that this list is largely centered around the United States and Global North––there is a serious lack of historical docs made by women from the world at large available to stream online. However, you can read through PBS.org’s article about women’s history in documentary film to learn about its context outside the Western world.

Despite their relative obscurity, these female-directed documentaries are intriguing and inspiring works of art that have shaped the canon more than we know.

Recognized for the blend of feminist storytelling, humor and urban life that came together in her “Dunyementaries,” Cheryl Dunye centers her own experiences as a black lesbian filmmaker when creating her stories about young women, navigating the highs and lows of city life. Some of her earliest work from the 1990’s has been compiled into The Early Works of Cheryl Dunye, including Vanilla Sex, She Don’t Fade and Janine. These films, filled with quotidian imagery and striking intimacy, were undoubtedly ahead of their time, combining non-linear narratives and video montage, blurring the line between fiction and nonfiction.

Ornette: Made In America (Shirley Clarke, 1986)

Ornette Coleman is one of jazz music’s most important figures; as an early pioneer of free jazz, he pushed forward a boundless, avant-garde style that broke free of chord- and harmony-based structure. It is apt, then, that the documentary on his life, Ornette: Made In America, was made by Shirley Clarke, early American experimental filmmaker, who constructs a dazzling, impressionistic fever-dream surrounding Coleman’s life, full of choppy edits and turbulent music, rather than create a conventional chronicle. Having trained as a dancer in New York City, Clarke’s love of movement and choreography is quite apparent in her work.

Where to Watch: Digital TVOD

Agnès Varda is, of course, a titan of documentary filmmaking, having redefined the genre with her signature verité style and focus on women’s issues and social commentary. A particularly remarkable film from her output is her first documentary short: Diary of a Pregnant Woman, or L'opéra-mouffe, a 17-minute documentary about a street named Rue Mouffetard in Paris, depicted through the eyes of a pregnant woman who walks around the neighborhood. This female point-of-view is an important detail, since much of how Varda––and thus, the protagonist––saw and perceived the world, was informed by a feminist perspective. As Varda takes us through the marketplace, full of surprising sights and sounds, it becomes apparent that only Varda was capable of such sublime poetry as far back as 1958.

Where to Watch: DaFilms

Madeline Anderson was the first African-American woman to executive produce a nationwide TV series (PBS’ ‘Infinity Factory’), and she got her footing in documentaries in the late ‘60s with her deeply personal and politically charged pieces. I Am Somebody, which is included in the Library Of Congress’ National Film Archive, tells the story of 400 Black women workers at a hospital in Charleston, SC, who go on strike for equal wages. Composed with archival footage, newsreels and interviews with women at the protest site, Anderson displays her connection to the story as a black woman herself, and recounts this important moment in civil rights history with journalistic prowess.

Having won the Academy Award for Best Documentary Feature in 1976, Harlan County, USA is perhaps the most widely known film on this list. Nonetheless, Barbara Kopple’s unflinching portrayal of the 180 Appalachian mine workers who protested against the Duke Power Company in Kentucky has become an endearing symbol of all that social justice documentaries can achieve, and how they must empower their subjects. Taking viewers from the streets, to the houses of the workers, to the offices where they work, a richly textured, definitively American story emerges from the film. The film also pays special attention to the miners’ wives, who remain resilient and offer thought-provoking reflections on the strike throughout the film.

Be Natural: The Untold Story of Alice Guy-Blaché (Pamela B. Green, 2018)

Alice Guy-Blaché’s name is rare to find in the canon, but this early pioneer’s contribution to filmmaking in general cannot be ignored. The French filmmaker was first drawn to the medium when it began and an industry was starting to emerge––in 1894––thus making her the first woman to direct a film, and perhaps the only woman to be making films at all from 1896 to the late 1910s. Eventually, she moved to the United States, where she and her husband spearheaded a production house. Be Natural, directed by Pamela B. Green, gives Guy-Blaché’s overlooked story the attention it deserves, shining a light on her diverse filmography, which included everything from dreamlike adaptations of Edgar Allen Poe’s poetry (The Pit and The Pendulum) to macabre romance dramas (What Will People Say?) The film also stars some premier women in film, such as Jodie Foster, Ava DuVernay and Agnès Varda, who discuss Guy-Blaché’s historic importance.

Where to Watch: Kanopy, Digital TVOD

END_OF_DOCUMENT_TOKEN_TO_BE_REPLACED

The Feedback: Maria Finitzo's 'The Dilemma of Desire'