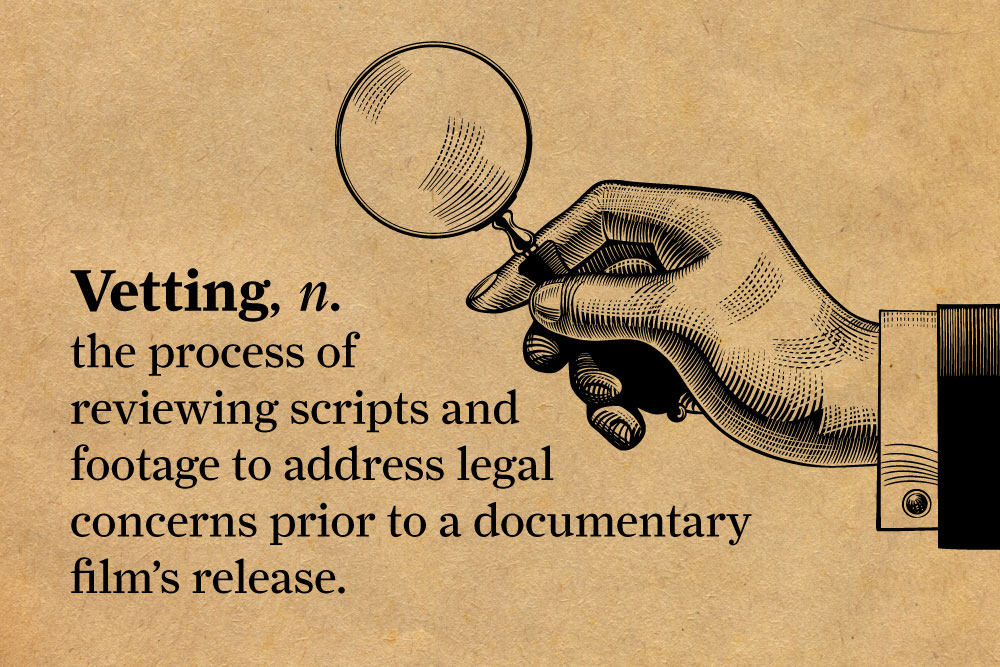 Vetting—the process of reviewing scripts and footage to address legal concerns prior to a documentary film’s release—generally occurs at (or toward) the end of a project. And while vetting is a necessary and important step, many legal issues can be identified and addressed much earlier in the filmmaking process. Indeed, for many independent documentarians, working with an attorney during the development and production of a film is invaluable. For example, an attorney can help a documentarian obtain access to key documents, footage and court filings.  An attorney can also provide advice about how to gather information safely and lawfully, and how best to protect sources and work product. Perhaps most importantly, working with an attorney early on can help documentary filmmakers identify (and avoid) potential legal problems and roadblocks that could arise later.

Since 2017, attorneys at the Reporters Committee for Freedom of the Press have provided pro bono legal assistance to documentary filmmakers for projects supported by the IDA Enterprise Documentary Fund. Through their work with Enterprise grantees, and through their pre-publication advising work with other investigative journalists, Reporters Committee attorneys have identified a number of frequently encountered legal issues that filmmakers should keep in mind throughout the course of their project—well before the vetting process begins. While there is no substitute for individual legal advice, the following tips can help documentarians deal with (and plan for) some of the more common legal concerns that can arise during development, production and vetting.

When it comes to getting documents, plan ahead.  If you need to request government records under the Federal Freedom of Information Act (FOIA) or a state public records law, do so as early as possible. Many government agencies, especially at the federal level, are slow to respond to such requests. You should also anticipate requiring additional time to appeal or otherwise challenge an agency’s refusal to release the records you requested. Because delay on the part of government agencies is common, if you wait too long to submit a public records request, you may not be able to get the documents you need in time to use them in your film. Similarly, when it comes to records from court cases, try to get your hands on what you need as early as possible.  In some cases, court filings can be sealed, or documents can be subject to a protective order and, while it is possible to challenge these kinds of restrictions on access, such challenges can take time.

Know when you can record without permission (and when you need it). Most of the time, when documentarians are filming or conducting face-to-face interviews, their camera and other recording equipment is in plain view. In those situations, it is presumed that the parties being filmed or interviewed know they are being recorded and have consented to being on camera.  Things can get more complicated, however, when a filmmaker wants to film or record audio of someone who does not know they are being recorded. In a majority of states, you are allowed to record a conversation to which you are a party without informing the other parties to the conversation that they are being recorded, allowing for surreptitious (or secret) recording for use in documentary films. Federal wiretap laws also permit this kind of “one-party consent” recording of telephone conversations in most circumstances. A minority of states, however, including California, Florida and Illinois, are so-called “all-party consent” states; they have laws that forbid recording private conversations without the consent of all parties involved. A handful of states have different rules depending on whether the conversation occurs in person or over the phone or based on other factors. Accordingly, if you plan to surreptitiously film a subject, or record a telephone or other conversation for use in your film, know what law applies. For telephone calls, be sure to find out where everyone on the call is located; even if you are in a one-party consent state, like New York, if you are talking to someone in an all-party consent state, like California, you should obtain their consent to record the conversation. To learn more about which states are all-party consent states, check out the Reporters’ Recording Guide, a free, online guide prepared by Reporters Committee attorneys.

Edit with care. Avoid editing footage in a way that could be misleading or create a false, negative impression. In 2016, journalist Katie Couric and filmmaker Stephanie Soechtig released a documentary film on gun violence in America entitled Under the Gun. Members of a nonprofit gun-rights organization called the Virginia Citizens Defense League agreed to be interviewed for the film, and the final cut includes portions of that interview, which was conducted by Couric. In the film, Couric asks, “If there are no background checks for gun purchasers, how do you prevent felons or terrorists from purchasing a gun?” Approximately nine seconds of silence follow, during which the VCDL members sit in silence and shift uncomfortably in their seats, averting their eyes. Although the film accurately portrayed most of Couric’s interview with the VCDL members, this 12-second clip did not transpire as depicted. In the unedited footage, Couric’s background-check question prompted approximately six minutes of responses from the VCDL members. Rather than use footage of their responses, the filmmakers edited in b-roll footage taken prior to the interview in which Couric asked the VCDL interviewees to sit in silence while technicians calibrated the recording equipment. After the film’s release, Couric issued a statement apologizing for the edited version of the interview that was shown in the film, calling it “misleading.” Thereafter, the gun-rights group and two of its members filed a defamation lawsuit. A federal district court dismissed the action, and a federal appellate court affirmed that dismissal in 2018, finding the filmmakers’ “editing choices” to be “questionable,” but not actionable. While Couric and the filmmakers ultimately prevailed in the lawsuit, the filmmakers’ editing of that 12-second clip led to protracted litigation and harsh criticism of the film—two things that all documentary filmmakers would like to avoid.

Beware of trade libel.  Most documentarians know that a false, defamatory statement about a person can lead to a lawsuit, but many documentary filmmakers are not aware that the publication of a false statement of fact about a product (or that disparages the quality of a service provided by a business) can also prompt a lawsuit. Oprah Winfrey learned about so-called product disparagement laws firsthand in 1998, when she was sued for an episode of her talk show that addressed food safety. During an interview segment, which included a discussion of bovine spongiform encephalopathy—commonly known as “mad cow disease”—Winfrey stated that it had “just stopped me cold from eating another burger. I’m stopped.” Members of the Texas cattle industry sued Winfrey and others, claiming that her statement falsely disparaged beef and led to a decrease in sales. Though Winfrey rightly prevailed in the litigation, the lawsuits serve as a reminder that criticizing products—not just people—can sometimes be risky.

These are just a handful of the legal issues that attorneys frequently encounter when working with documentary filmmakers. While this article can help you better understand (and plan for) some of the more common legal concerns that can arise during development, production and vetting, they are not intended to take the place of specific legal advice from a licensed attorney in your jurisdiction. If you are an independent filmmaker who needs assistance finding an attorney, you can contact the Reporters Committee for Freedom of the Press Legal Defense Hotline at www.rcfp.org/hotline.