Doc Star of the Month: Margaret Byrne, 'Any Given Day' 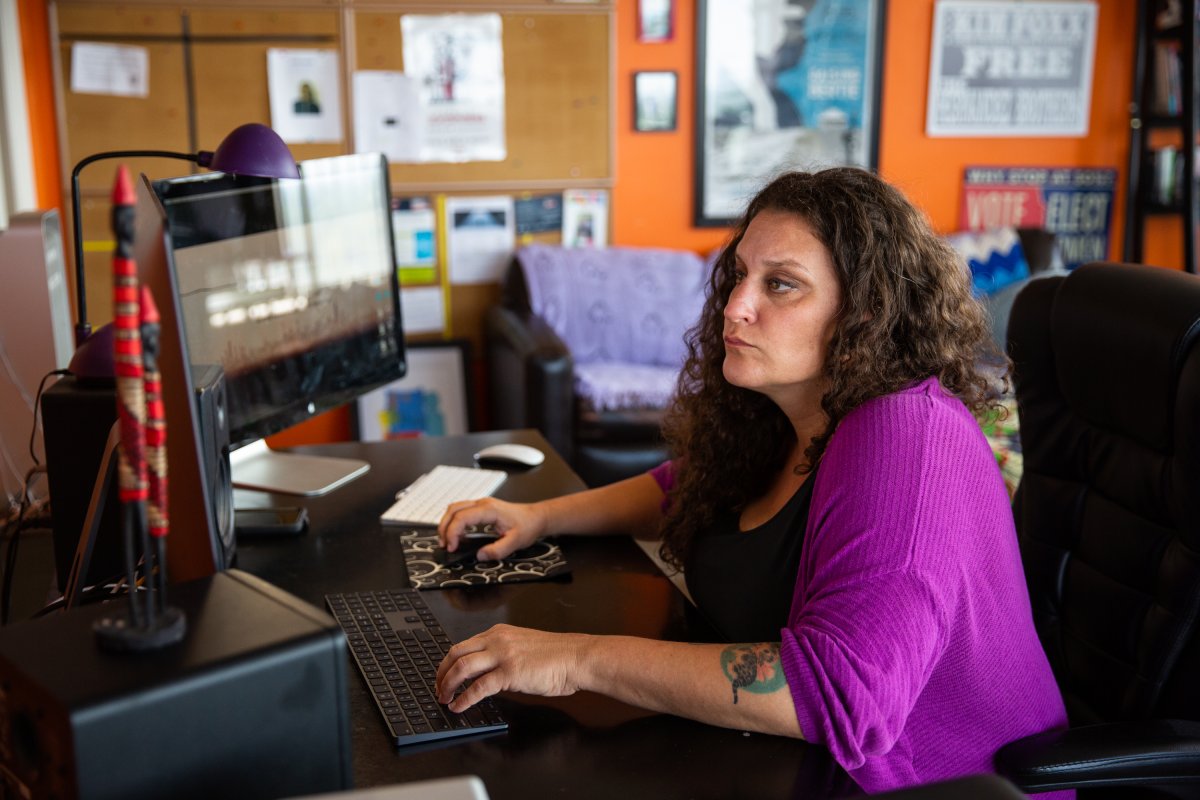 Margaret Byrne’s Any Given Day is a half-decade-long ride on the roller coaster that those living with a mental illness face—on “any given day”—through the stories of four distinctly riveting individuals, three of whom the director met while investigating the treatment of detainees at Chicago’s Cook County Jail, which in 2014 had the dubious distinction of being the largest single-site mental health facility in the country. And these individuals are participants in the city’s diversionary mental health court probation program. (Which, unfortunately, is itself problematic, since a guilty plea is often the price of admission.)

There’s Angela, a dedicated preschool teacher and single mother of four fighting to regain custody of her youngest. Also Daniel, who studied fashion before his dream of being a shoe designer got upended by his illness. And Dimitar, an author (State of Schizophrenia) and anthropologist who emigrated from Bulgaria as a boy and worked full-time to put himself through college. And rounding out the quartet is Margaret Byrne herself, a single mother and the founder-director of an all-female film collective called Beti Films—whose lifetime battle with depression nearly derailed her latest doc. Any Given Day premieres July 7 as part of World Channel’s America ReFramed series.

In honor of BIPOC Mental Health Month, Documentary reached out to the Emmy Award-nominated filmmaker-protagonist, who agreed to put herself in the spotlight and serve as our July Doc Star of the Month—and to let us in on the one project that forced her “to challenge the stereotype that a person with a mental illness is an unreliable narrator."

DOCUMENTARY: What were the discussions like surrounding this tough decision to include yourself in the film? Were both the team and your own family encouraging?

MARGARET BYRNE: I didn’t actually decide to include myself in the film until after we’d started editing. I had a small presence around the edges; you’d hear me from behind the camera, but you didn’t know who I was. Editor Liz Kaar really encouraged me to include my story. I didn’t want to be filmed, but I knew she was right.

I thought hard about why it made me so uncomfortable, and I realized it was because I didn’t want to look weak and I didn’t want to be judged. I knew that was ridiculous; my struggle with mental health is not unique, and I did not see Angela, Daniel and Dimitar as weak. If I was asking them to talk about their mental health, then I needed to talk about mine too, or else I would perpetuate my own internal stigma as well as the external stigma we all face. [This was] one of the reasons I was making the film in the first place.

During post-production I worked with an incredible team of women that I trusted. So I allowed myself to be vulnerable, knowing that if I couldn’t live with it, we could always take it out. I’m not sure I would have included myself in this way without Liz’s direction and reassurance, and the encouragement of the team around me: producer Latesha Dickerson and associate editor Rory McFadden.

My sister Jenny was actually one of the few people who saw me struggling over the years to make the film and maintain my mental health. She never told me I was doing too much and that I needed to put the film aside, which some people did. She understood how important it was to me. Now she often says, “You’re doing better than you’ve ever done before.” I think she’s probably right.

D: At what point in the filmmaking process did you disclose your own struggles to your protagonists? Did you do so straight away as a bridge to building trust?

MB: I talked about my own mental health from the beginning, as one of the reasons I was making the film. I was very transparent and open with everyone, and we found we had many common experiences. Angela and I were patients at the same hospital—the safety net hospital that's now closed. Dimitar and I went to the same college. We all grew up in different parts of the same city.

Over the course of five years of filming, I built trust by being consistent and genuinely caring about their well-being; I paid attention to them and listened. I got to know them and their families. And they got to know mine.

D: Race and class inequities obviously also play a big role in this film. As someone who's long been embedded in the BIPOC community—though not in the same dire financial straits as your protagonists (or battling addiction)—how did your own relative privilege affect your relationship with those you filmed?

MB: It is evident in the film that there are huge disparities that persist across race and economic status with regard to knowledge of, diagnosis, and access to effective treatments for mental health challenges. I come from a white middle-class family. My dad was a pharmacist and my mom is a behavioral health nurse. I was diagnosed and received treatment at a young age. My family is my safety net—and it is because of their support and resources that I am in the position of privilege to make the film.

When you’re struggling with your mental health, it can affect your housing, your work, your finances, and your relationships. That’s something Angela, Daniel, Dimitar and myself have all experienced. One of the reasons I included myself in the film is to show that this is an issue that transcends economic status and race. Jail is the safety net for people without family support. Engaging in an open and respectful conversation about disparities is crucial to any discussion about building a better system for mental health care, in order to achieve mental wellness at a community level for all. 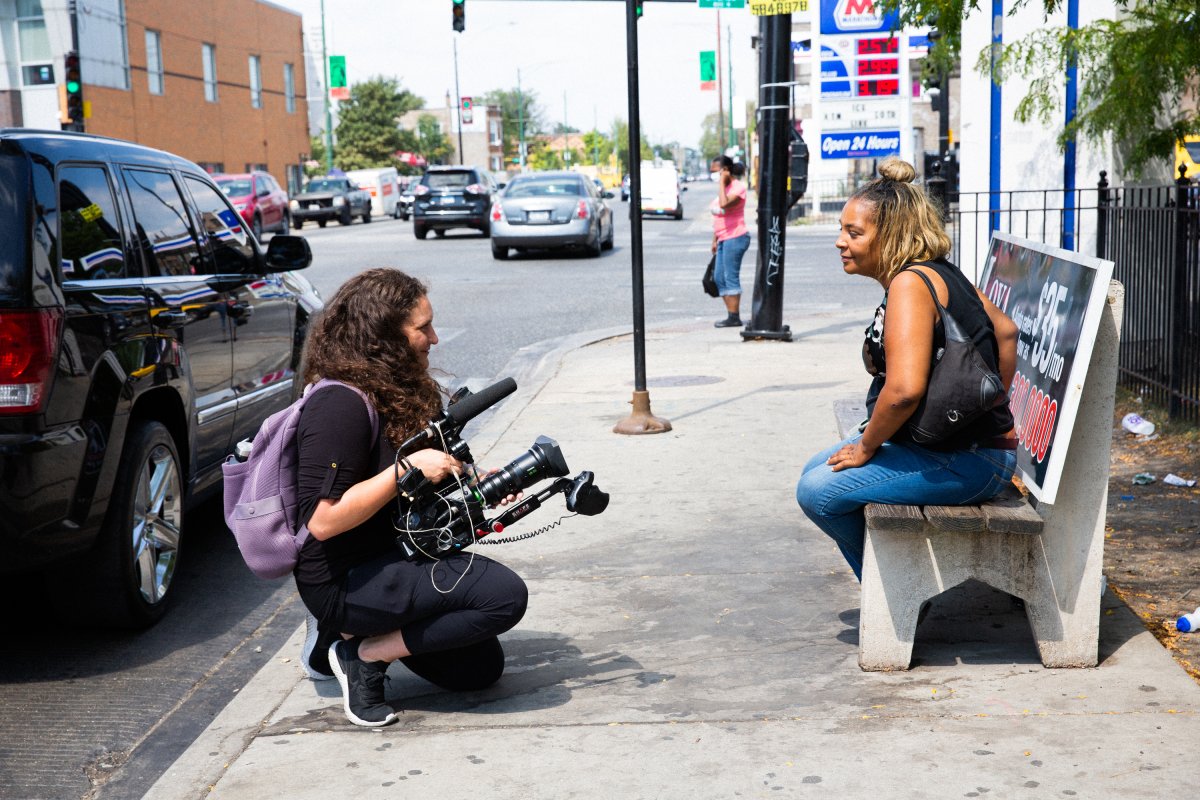 D: I read that making the doc involved “democratically discussing” with your protagonists which scenes would be filmed and what each of their stories needed to convey. Did any strong disagreements between the protagonists and yourself as a director—and also between you as a protagonist and your own team—arise from this process?

MB: When we were almost finished, I showed the cut to Angela, Daniel and Dimitar. Each of us talked about scenes or moments that were uncomfortable, and everyone signed off on the film. During the virtual premiere at Hot Docs in 2021, we all participated in panels over Zoom.

Our first in-person festival was Chicago International, our hometown. Before those screenings, we hired a film therapist. She met with all of us individually and as a group; everyone found the process helpful, especially just to know there was someone to talk to if needed. She also was available the day of the premiere for the participants and the crew.

There were no disagreements that arose between myself as a protagonist and the team. We actually used a lot of footage I had filmed on my phone over the years to help tell my story, including my favorite scene, when my daughter Violet and I go through the car wash. I told Liz, “We have to put this in the movie! It’s a metaphor!” And she made that beautiful scene—a metaphor for our journey, with light at the end of the tunnel.

D: You’ve also described filming with your protagonists as a therapy session. Yet it seems that working on the doc likewise might have sparked something that eventually led to your hospitalization. So with this issue of “trauma-informed storytelling” being such a hot topic within the industry right now, I’m wondering if you discovered any best practices while making Any Given Day. Looking back, would you maybe have done things differently—perhaps even budgeted for an on-set therapist as many documentarians have begun to do?

MB: For the first few years I was shooting the film on my own, working jobs, teaching, and raising a kid. If I could have brought a therapist on set—which I absolutely advocate for when necessary—it would have been a different film. Any Given Day is about our authentic journey to find mental health treatment that works for each of us; a therapist would have shifted that reality.

It was making the film that ultimately led me to get treatment. During production some of their trauma triggered my own—which, coupled with financial instability, isolation and exhaustion, led to a mental health crisis. I wish I’d been in treatment before I began the film, but I’m grateful for the lessons learned along the way. And grateful for the team that helped me tell the story.