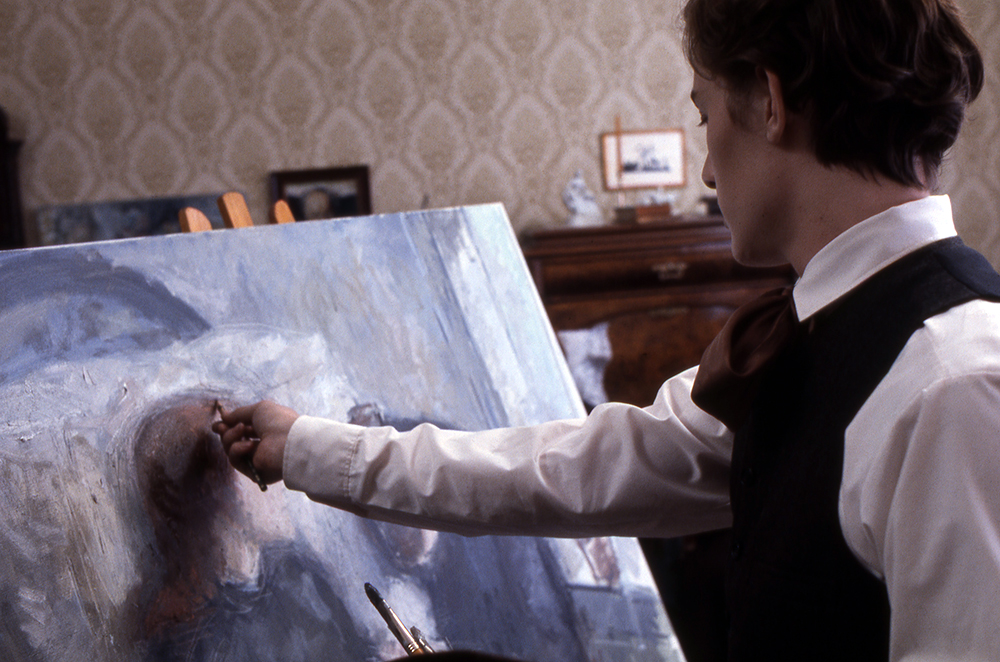 I believe I've gone through a half-dozen laptops since 2007, when I first saw Peter Watkins' film Edvard Munch. There's a pair of screenshots captured during that first DVD viewing that I've dragged across all these computers, while discarding so much else along the way. I think I've held onto these artifacts as a set of digital talismans, a desktop reminder of the exhilarating thing that Watkins manages in his unconventional portrait of the Norwegian painter. Namely, capturing the true, varied chaos of life— art-making and the very messy business of living—while simultaneously screaming across a century.

In the three-and-a-half-hour film, released in 1974, Watkins' approach is located along the hybrid documentary-fiction spectrum: the dialogue and character voiceovers come straight from the text of Munch's turn-of-the-century diaries, alongside recreated scenes from his life, captured through recognizably mid-century "documentary" camerawork, with the performers often staring straight into the lens. While the narration marches chronologically through Munch's life and career, the editing is elliptical and associative. The sound bed is often comprised of simultaneous whispers of prayers, the scraping of charcoal on a canvas, children singing, detached snippets of conversation, and a faint sobbing, all built up like translucent layers of oil paint. Edvard Munch's imagery bounces around through time, obsessively and claustrophobically looping upon itself. The film circles around repeated images of trauma and love, calling back again and again to glimpses of white dressing-gowned children coughing up shocking blood and the aquiline profiles of the women Munch desires.

The film's structural and formal DNA rejects any separation between what we call "biography" (and all of its attendant psychological woes), art and politics. Watkins' deadpan narration pauses at each turn of the calendar to root us firmly back where we are within the context of the historical moment. In 1889, he tells us in a typical list, there was Van Gogh, the Eiffel Tower, the box camera, Hitler's birth and the rise of the Symbolist poets in Paris. The film is a document of Munch's life and career, yet also a crucial reminder that larger forces drove and damned both his work and relationships. Meanwhile, Watkins is also allowing for the present moment. The to-camera interviews delivered by the performers are utterly unscripted; the actors were told to do their own research and speak to questions such as the shifting societal roles of women, the challenges of marriage, and the position of art, each as they saw fit. This collaboration with the cast (to whom Watkins gives a writing credit) leaps a step beyond improv, allowing for a seepage of 1974 into fin de siècle Europe.

By both remaining hyper-specific to the historical context in which Munch is creating his work, and crashing right into the present, Watkins tackles time and the stubborn riddle of historical memory: how to image it, how to communicate through it, how to remain true to it and also transcend it, how to make it alive and potent—the shooting-for-the-stars aims that I'm always trying to wrestle my way towards in my own heavily archivally based films. Watkins describes Munch's mission at a crucial artistic turning point as trying "to understand and express the purpose of man's existence. Of woman's existence. The purpose for their pain, their love, their despair. Links in an endless chain, tying together thousands of generations." Here, I'd argue the film rises to meet its subject. Thanks for the links, Watkins.

Sierra Pettengill is a Brooklyn-based filmmaker. Her latest film, all-archival The Reagan Show, premiered at the 2017 Tribeca Film Festival and will air on CNN in the fall.