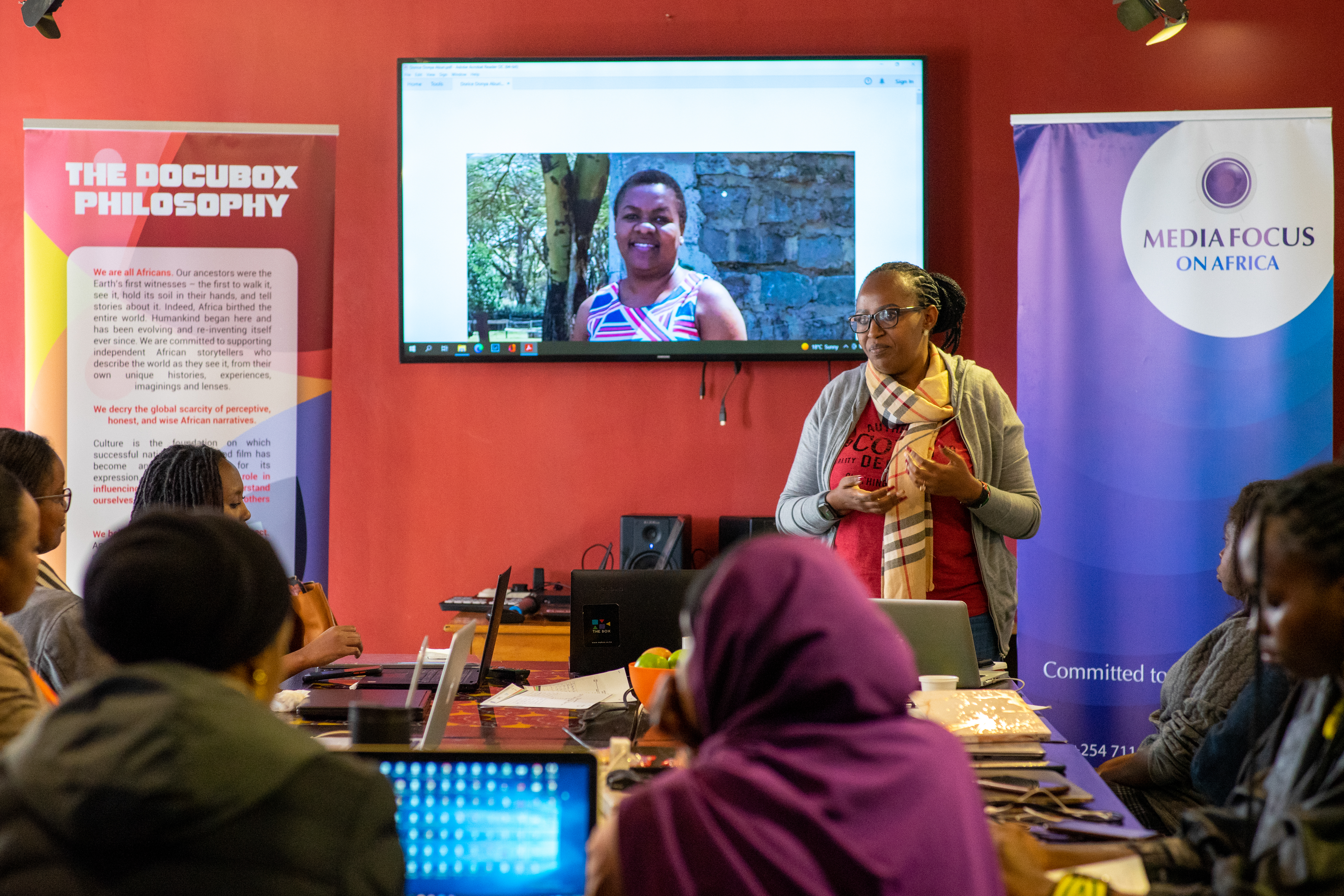 The year 2020 was a pivotal one for Kenyan documentaries—and for Docubox, the East African film fund created by Kenyan filmmaker and administrator Judy Kibinge in 2013.

Christopher King and Maia Lekow’s The Letter, one of the recipients of Docubox’s inaugural development and production funding round, was Kenya’s pick for the Academy Award for Best International Film. Even though the film—a poignant investigation of elder abuse in a Kenyan rural community— was not shortlisted, it enjoyed considerable acclaim and was screened at several high-profile film festivals. Softie, another film that Docubox supported in its later stages, premiered at Sundance in 2020, where it received a Special Jury Mention for editing. Directed by Sam Soko, Softie, a riveting profile of Kenyan photojournalist and activist Boniface Mwangi as he ran for office, was an unlikely mainstream hit, becoming the highest-grossing film in Kenyan theaters that year.

Kibinge was a glass-ceiling-shattering advertising executive when she decided to quit in 1999 to follow her filmmaking instincts. At that time, Kenya did not have much in the way of filmmaking activity. Kibinge’s debut fiction feature, Dangerous Affair, is sometimes credited with kickstarting the current wave of contemporary filmmaking in Kenya.

Kibinge spent the next decade making a variety of feature fiction films, NGO commissions, and documentaries. Having grappled with the challenges facing documentary filmmakers, Kibinge began to envision an organization—for filmmakers and run by filmmakers—that would provide the support that was sorely lacking. NGO-commissioned work formed the backbone of Kenya’s documentary industry at the time, and there was a dearth of resources and opportunities for filmmakers looking to make more creative, character-driven work.

And so Docubox was born. With major seed funding from the Ford Foundation and a posse of partners, Kibinge, who had no experience managing film funds, was able to put together a team from the ground up. This team got to work and created structures that could achieve the objective of training and supporting documentary filmmakers in Kenya and in the wider East African region.

While a lot of Docubox’s eventual funders and partners—HIVOS, British Council, among others— supported specific programs, the real game-changer was securing a BUILD grant from the Ford Foundation, a five-year initiative that offers core support to organizations to deliver on their primary goals. About the impact of this grant, Kibinge tells Documentary, “I cannot express strongly how that has stabilized and allowed us to build a solid team. They [Ford Foundation] literally gave us the money and backed off. They have zero input in what we choose to fund, so our filmmakers have full autonomy. They do not ask to see proposals that come in. It is the most amazing grant.” 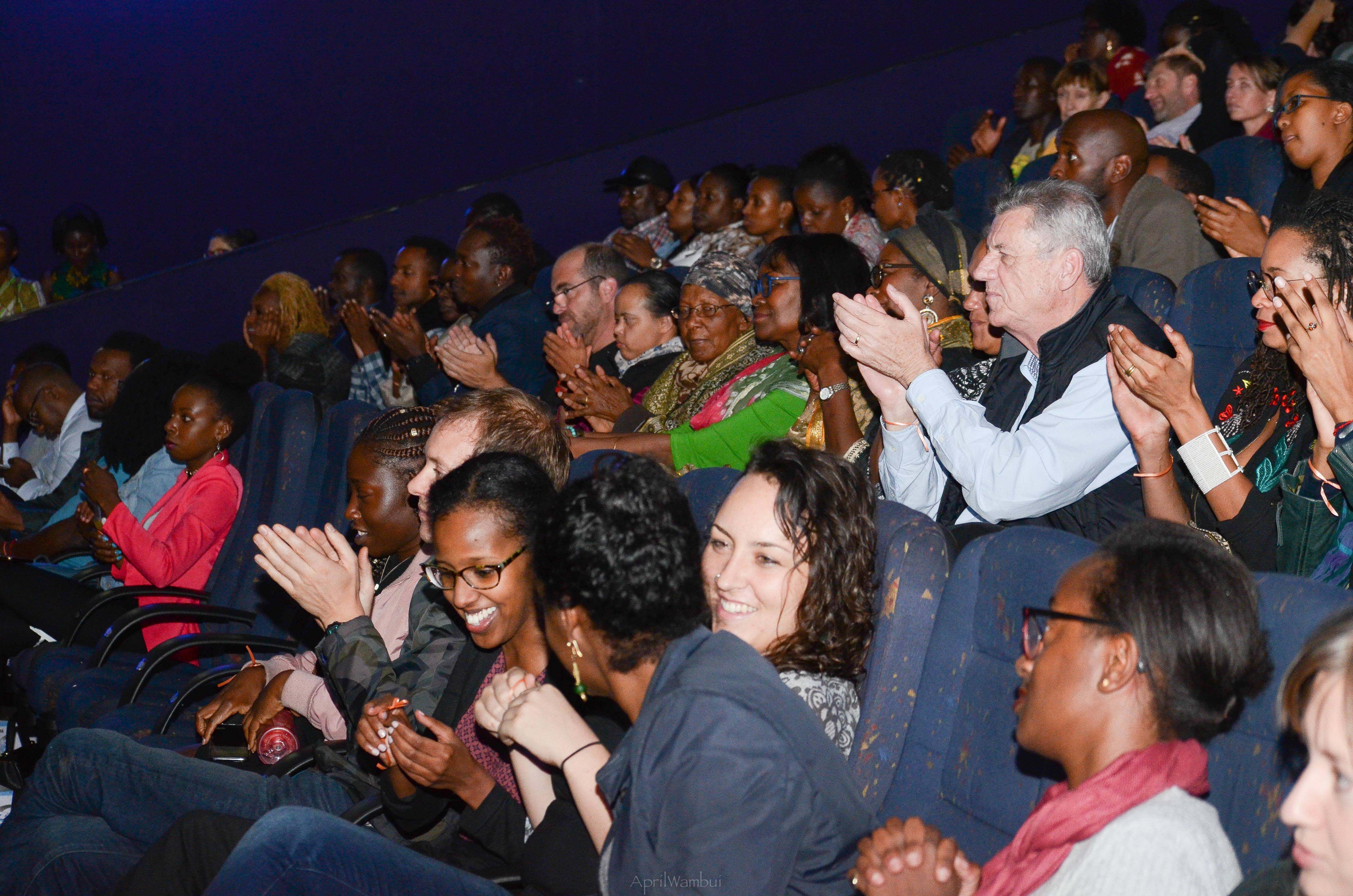 It took a while to learn the ropes, and Kibinge and her team realized that building and nurturing a documentary community was just as important as a sourcing and providing funding for production or distribution. With this in mind, Docubox came up with The Box, a physical hub for filmmakers to converge, host regular screenings, take meetings, share ideas and skills and collaborate on projects. The landmark quarterly Shorts, Shorts & Shots program—an initiative of The Box in which attendees sip shots and watch short films while wearing shorts—has been key to discovering a new generation of local filmmakers and building new audiences at the grassroots level.

Kibinge stresses the importance of making Docubox a safe space for all kinds of creative expression: “I love that filmmakers and staff alike talk about Docubox as family. It is a place where people feel safe and supported. When you consider how much of our time we spend at work, it is great to feel at home somewhere.”

There remains plenty of work to be done, Kibinge insists, particularly with film distribution. While Docubox asks for credit for the films they support, they hand over all ownership to the filmmakers. Because of this, distribution remains uneven, and while titles like Softie or The Letter manage just fine, many others struggle to break through. Strangely enough, years of NGO investment in the local documentary space have conditioned Kenyan broadcasters to demand compensation from filmmakers to program their films, so that avenue isn’t always available for filmmakers with limited resources.

Distribution remains a function of proximity to agents and film distributors and powerful film festivals, and only a handful of these films have the resources to begin to compete at such levels. Kibinge takes some responsibility for these gaps as she reflects, “I suppose Docubox should have some convening power to distribute our films…and we are thinking about it. But each film has a different plan and life cycle, so it’s not so straightforward.”

Perhaps because of this challenge, many films have taken to focusing on impact strategies as a more empirical measure of success. For instance, the Docubox-supported feature Thank You for the Rain, about a rural farmer who takes his lobbying for the climate all the way to the United Nations Climate Change Conference in Paris, made quite the splash on the festival circuit. The film was picked up and distributed in several territories, but Kibinge says its ultimate impact has been informed by the village where it was filmed. She notes, “As a result of that film, we built a dam that about 300 families rely on. For a film like The Letter, the thing that would be most impactful is for the killings of the elderly to be reduced, following community screenings along the coast. Even if the film doesn’t end up on television, it really changes something. You cannot put a price on that.”

If Kenya is now the documentary powerhouse of the East African region, Docubox can claim some credit. But there are challenges still. Teething problems meant that the first generation of feature projects funded by Docubox took longer than expected, and it wasn’t until five years later, in 2018, that Philippa Ndisi-Herrmann’s autobiographical New Moon would be presented at the Luxor African Film Festival in Egypt. The film, a poetic reflection of the filmmaker’s personal transformation as she observes a stone town on Kenya’s coast, would mark the start of a productive new chapter in Kenyan film. People began to be exposed to a different way of making documentaries. 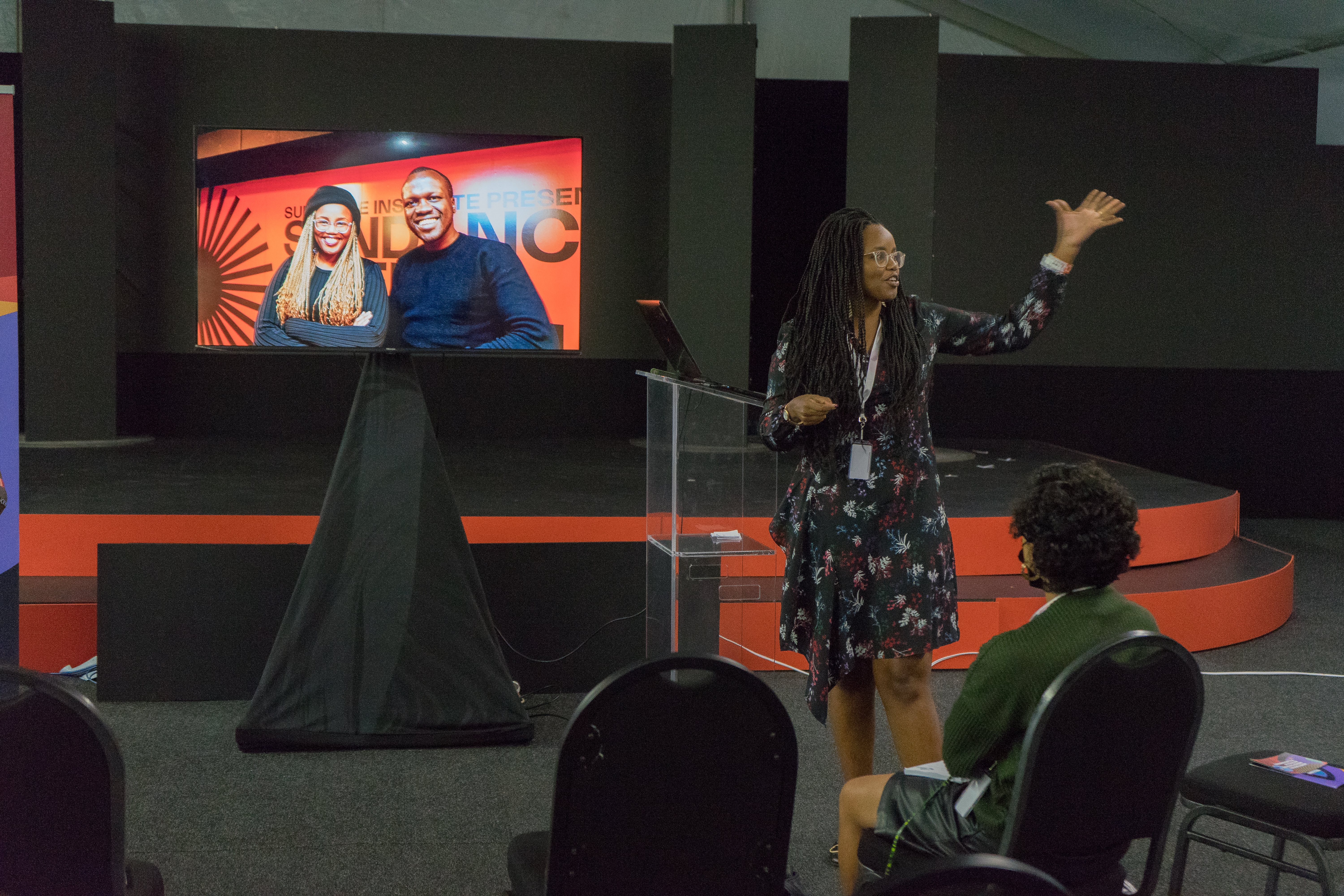 Toni Kamau, an independent producer who leads her own company, We Are Not the Machine, is one of the converts. Kamau was working in television, creating commissioned content for foreign media platforms and corporations. She came into contact with Docubox while producing I Am Samuel, a film— eventually banned in Kenya—about an openly gay man and his relationship with his parents. “Docubox introduced me to the world of indie documentary production in 2013, when they supported I Am Samuel,” says Kamau about her experience. “Judy and her team were very intentional about introducing us to mentors, taking us to festivals, and creating a safe space and community to grow as independent filmmakers.”

While trying to get Softie off the ground, Sam Soko was also helping out on I Am Samuel as the project participated in Good Pitch Nairobi, a partnership between Docubox and the British nonprofit Doc Society. He was impressed by the work being done. Soko recalls, “It was great to see even then, how they [Docubox] had started to create a community for documentary filmmakers, which I think has been beneficial for the growth of our documentary not only in the local space but globally.”

Kibinge understands that she has had the luxury of being able to run Docubox for the last five years without having to worry about funding for core operations. This privilege is being threatened, however, with the fast-approaching closeout of the Ford Foundation grant by year’s end. If anything keeps Kibinge up at night, it is ensuring that Docubox’s work has some sustainability. She is hard at work trying to raise an endowment of about $10 million to continue Docubox’s work. “If anything can stabilize us for the next ten years, it would be an endowment,” she maintains. “It is quite frightening because this is a different way of fundraising. It is hard because the culture of funding has been shrinking, as anyone doing our work will tell you.”

As a member of the ecosystem that has benefited directly from Docubox, Kamau—who also co-produced Softie—is rooting for Kibinge and Docubox to go the distance. She charges, “We need wealthy Africans to get behind Docubox’s endowment fund so that they can continue to support ambitious and creative storytellers who are interested in creating narrative shifts around how we as Africans are perceived. I deeply believe in the team and their work.”

Kibinge has spent nearly the last decade as a grants administrator and industry resource person, and even though her work has been rewarding, she says she remains a filmmaker at heart and would love to go back to making films when she can. A future project that remains close to her heart is around the matter of archives. If she had some spare time and funds, Kibinge would love to invest in building or restoring a collection of archival footage relating to Kenyan and African history.

Kibinge tells a story that still makes her emotional, about corresponding with an American filmmaker who recalled how, in the wake of Kenyan independence, he was allowed to leave only with the footage he could carry in his hands because officials were going to destroy their considerable archival collection. Kibinge opines, “Across the continent, there is now this race to save existing archives. Growing up, a lot of adults had these super-8 cameras. I have a feeling there is more footage than we think, hidden across the continent. Because we have lost so much footage from our national archives that did not survive, it may be time to start looking at unusual sources of footage.”

Despite the long list of challenges and limitations, Kibinge is excited by the work Docubox has done over the years and takes some pride in that. The capacity-building, the funding interventions, the community of people, the steady pipeline of films, and the onscreen representation of Kenya and Africa. All of it. “A thing like Docubox needed to exist to be able to convene all this,” she reflects on Docubox’s legacy. “It feels like it has never been more important to tell Africa’s stories.”

Wilfred Okiche has attended critic programs and reported from festivals in Locarno, Rotterdam, Stockholm, and Sundance. He works as a film critic and occasional programmer and has garnered experience covering and writing about documentaries, Nollywood, and African cinema. His writing has appeared in Variety, IndieWire, Filmkrant, and Senses of Cinema, among other publications.