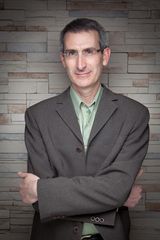 Ken Jacobson recently came on board as IDA's director of educational programs and strategic partnerships—a new position created to accommodate a critical pillar of IDA's core mission: education. Ken comes to us from the Palm Springs International Film Festival and ShortFest, where he served as education/outreach coordinator and programmer. Over the years he has taught both film and video production and cinematic history, at every level from high school thought continuing education, and has made documentaries as well. He is a graduate of Stanford University's prestigious Documentary Film and Video Program.

Two weeks into his new job at IDA, we interviewed Ken by e-mail, and he shared his thoughts on teaching, program development, Los Angeles and the docs that have inspired him the most.

Documentary: You graduated from Stanford's master's program in Documentary Film and Video, and your work experience since then has been primarily in education and programming. Talk about how you chose and followed this career path.

Ken Jacobson: The long and somewhat winding road to where I sit today began with my desire to be a documentary filmmaker. But even when I was at Stanford, I was designing and teaching a class to undergrads on documentary production and creating a workshop for youth in East Palo Alto. So, the desire to teach was always there. And it also runs in the family: Both my dad and my sister have been full-time teachers. So, when my frustration over the inability to crack the code of being a self-sustaining documentary filmmaker reached a certain threshold and the opportunity presented itself to start over and begin a teaching career, that's the path I took. I always had in the back of my mind that I would return to the documentary world down the road, so the job at IDA in a way represents a convergence of these two paths—the documentary path and the educational one.

D: You've taught at a variety of educational levels: high school; university, at both the undergraduate and graduate levels; and adult/continuing education. What have been the most rewarding aspects of your teaching career thus far?

KJ: It may be a cliché, but it's true that teaching and producing programs for young people has provided me with the most satisfying moments of my career. As a high school video teacher, the highlights were giving students the tools and providing the support for them to create projects that, starting out, they weren't sure they were capable of. Just recently, I happened to cross paths again with one of the high school students I taught, who happened to have a film in the Palm Springs ShortFest. It was inspiring to see how that student had transformed into the accomplished filmmaker that he is today. Similarly, as part of my educational outreach work at the Palm Springs International Film Festival, nothing beat the thrill of seeing the response to our annual Student Screening Day, when the filmmakers and subjects of films such as Louder Than a Bomb and Shakespeare High came on stage and the students in the audience erupted with applause. Nothing has shown me the power of documentary more than that.

D: Over the last five years, you've worked with the Palm Springs International Film Festival and ShortFest as education/outreach coordinator and documentary programmer. You also launched and implemented a year-round educational and community program. Talk about the process of setting up this program-the partnerships you created in the Palm Springs community and school districts, and the challenges of creating a year-round infrastructure for an organizational model—a festival—that's perceived by some as a once-or-twice-a-year event.

KJ: Setting up year-round programs, like we did in Palm Springs, is pretty much the same with nonprofits everywhere. First, you need leadership within your organization—you have to want to get to where you're going and have a somewhat clear vision of what you want things to look like. Second, you need to work incrementally. When you are operating as a nonprofit, with a board, you need to show them results, and those results generally happen brick-by-brick, program-by-program, event-by-event. Third, you need to find good partners who themselves provide strong programs for their constituents, whether they be library patrons, in the case of our Behind the Scenes Filmmaker Series at the Rancho Mirage Public Library, or students, in the case of the Palm Springs Unified School District. Next, you need to be lucky enough to work with people in those organizations with whom you can build long-term trusting relationships. Finally, you need to be able to get  "butts in the seats"—you need programs that attract enthusiastic participants. There, that's my formula for success!

D: You are IDA's first ever full-time education director—your title is Director of Educational Programs and Strategic Partnerships. I know this is early in your tenure, but can you give us an idea of some of the programs you would like to explore with IDA?

KJ: Doc U is the centerpiece of IDA's educational and professional development programs, and I will be working with our executive director, Michael Lumpkin, and programs and events manager, Amy Jelenko, and the rest of our staff and board, to see to it that the programs continue to be of the highest quality and greatest benefit to filmmakers. Right now, we are looking to expand the program to become an intensive series of daylong workshops throughout the year that would be held here in LA at our new offices in Koreatown. I will also be exploring the viability of creating an online presence with Doc U-type experiences available through our website. Creating mentorships is another goal; we need to do all we can to support our members and fiscal-sponsored projects with professional development opportunities that can reach them, whether they are in LA or halfway around the globe.

D: For the "Strategic Partnerships" side of your title, what kind of organizations would be optimal for IDA to form alliances with?

KJ: We are looking for organizations that share our mission, are committed to serving documentary filmmakers in all capacities, and enhance the documentary community. Currently, I have the privilege of working with the Academy of Motion Picture Arts and Sciences and the Dolby Institute on a sound and music panel that we will be presenting at the Academy's Linwood Dunn Theater on Oct. 5. I'm also working closely with the Black Association of Documentary Filmmakers-West (BADWest) on a panel coming up on October 21. These are just some of the partnerships that I am excited about. Stay tuned for more!

D: Although California has been your home for your entire career, you are new to Los Angeles. What do you appreciate most about this city? What are the key strengths of the documentary community here?

KJ: It's too early for me to say what I appreciate about LA. I don't think I'll be satisfied until I discover the city's best coffee and bakeries...And three days after moving here, my car was rear-ended, so I'm not sure that the city fully appreciates me yet, either! As far as the documentary community goes—and my Bay Area comrades might cringe if they read this—I feel that it is right up there among the strongest anywhere in the US—or the world. The quality of the work, the passion for the medium  and the willingness to contribute to a larger community are really amazing. And the organizational support in LA, with IDA, AMPAS, Film Independent, Sundance and top educational institutions here, is probably second-to-none.

D: Finally, given your rich experience in studying, teaching, programming and making documentaries, what are some of the docs and docmakers that have truly inspired you?

KJ: The two docs that I keep coming back to that are the most personally significant are The Times of Harvey Milk and the TV doc series Eyes on the Prize. The Times of Harvey Milk as a powerful, feature-length dramatic documentary experience stands alone for me. Aside from the filmmaking, which is of the highest quality, I can't deny that as a native San Franciscan, it is, for me, a poignantly local story that is also universal and of great historical significance; I just feel the film in my bones. Similarly, the first Eyes on the Prize series had a profound effect on me and really changed the course of my life. When I moved to Boston in 1986, the first thing I did was contact Blackside Productions to beg them to be an intern. The timing wasn't right at first but later, when they cranked up the second series, I did get in the door and had an amazing experience as an intern there. From that experience, I knew that documentary life was it for me.

END_OF_DOCUMENT_TOKEN_TO_BE_REPLACED

Back to School: Pros Gain New Perspective as Guest Teachers