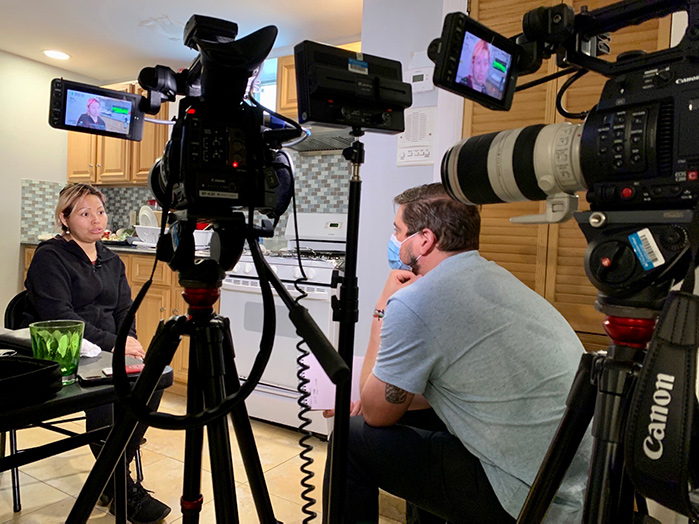 It is difficult to write about higher education or media studies in 2021, or anything actually, without invoking the C-word: COVID. Although we may attempt to downplay it, its influence has been overwhelming, eclipsing practically everything and everyone in its path. For the documentary students and faculty of Columbia University’s Journalism School, the pandemic presented a particular challenge, a puzzle that the news agencies and entertainment industries were just beginning to grapple with: How do you tell a person’s story if you cannot interact directly with that person? To discover the answers to this and a few other questions, Documentary recently spoke with professors from Columbia’s Documentary Journalism Program: June Cross, Professor of Journalism, and Director of the Documentary Journalism Program; Betsy West, Professor Emerita; Judith Helfand, Visiting Professor; and Thor Neureiter, Director, Video Journalism.

DOCUMENTARY: Could you tell us a bit about the documentary program at the Columbia Journalism School?

BETSY WEST: Academic institutions aren’t easy to navigate, so it was great that June and our past dean, Nick Lemann, advocated for it and got this extended semester to allow the students time to do their documentaries.

D:  Each documentary thesis gets paired with an advisor. Could you share with us how that process works?

THOR NEUREITER:  Filmmaking is more than just picking up a camera and pressing the record button, so we really want them to experience what it’s like to make an independent film; that’s from developing your concept to figuring out a distribution plan, and throughout it’s also, How do you pitch your film? Part of that is pitching yourself, pitching your story, and just being confident in talking about those things. So, midway through the spring, as their stories are starting to come together, we have a pitch mixer with our advisors, and everyone has five minutes as a team to pitch their stories and show their proof of concept to the advisors. Then, after it’s all over, we do, as June said, little speed meetings where all the teams go from advisor to advisor to have a quick conversation to see if there’s a connection between the story, the filmmaker, and the advisor. And then it’s a little bit like med school: The teams pick their top three, and the advisors pick their top three films, and then we deliberate on our end to see what the best match is.

BW: It’s a great introduction for the students into the world of documentary filmmaking, to be working with a professional who’s really holding them to professional standards.

D: Do the students always work in teams?

TN: They work with a partner usually, unless we have an odd number or someone decides they don’t want to complete the program. Sometimes we do have students working alone, but documentary is about collaborating, so we think it’s best for the students, and their films will be better for it, but we don’t force any partnerships.

JUDITH HELFAND: So it’s both the physical, the real technical collaboration, and then sort of a spiritual collaboration too. One of the reasons why they’re so strong [when they graduate] is because they are studying with all these other kinds of students in addition to studying how to make a documentary film. They’re doing data journalism, and they’re doing ethics, and they’re taking all these extra amazing courses, and there’s all these amazing guests that are coming through. So they’re engaged with this entire world of journalism at the same time that they’re learning how to make a documentary.

BW: We have top filmmakers who come and talk to our students. So, whether it’s Sarah Burns or Alex Gibney or Stanley Nelson—just to name a few—dozens and dozens of documentary filmmakers come and share their insights with our students.

D: Do they get to intern or is there not enough time?

BW: There’s not really enough time to do internships, but they’re adults and they can do what they’re going to do, but in general, it is a demanding program.

D: How about their gear? Was access to equipment limited during COVID?

JC:  Actually, no. They took the equipment home with them.

BW: They grabbed it as soon as they could. I just have to say that the technology that allowed these students to continue working through the pandemic is pretty extraordinary. If this had happened five years ago, it would have been very difficult because now we’re able to utilize Vimeo, WeTransfer, Google Docs and Zoom. So, we helped them deal with the incredible disruption that happened in March, and helped them figure out, How do you make a vérité film when you can’t film in person?

TN: We had the ability to work with them to start to work through some of the kinks of being remote from one another. And we were able to bring in Mike Puretz, who is the senior manager for post-production at The New York Times; he provided a workshop on working remotely with a team and how to avoid pitfalls and approach the whole process, which was very helpful.

JH: I think the one thing I would say about the cohort that you just saw [during Columbia’s DocFest 2020, streamed on December 12, which showcased the thesis work of the students] is that because of the pandemic, they’re all connected in some way. It’s of a moment. Each one is its own story, but together they are a document of a moment and a time, and not all films do that generally, right? They’re usually not woven together by a single crisis. So that was rather unique.

D: How is COVID affecting the school and the documentary program now, as opposed to a year ago?

TN: For the Documentary Program’s students, the last class in the school was with Judith on a Sunday night, and then the school was shut down until basically the beginning of July. But the current students, when they started in September, they were allowed in the building. However, part of the protocol is you have to get tested and sign a health compact, and you have to check in every single day to get a green light so your ID will work. It’s a big thing. Obviously, we don’t want anyone to get sick or die, so everyone has to buy in and follow the rules to keep us all safe.

D: Are you teaching with masks on or off?

JH: I have to say, the one good thing about Zoom is I can really see people’s expressions; something that’s a lot harder when their masks are on.

D: What’s the typical size of an incoming class? And what is the approval process for admittance to the Masters’ program for documentary?

TN: It’s varied throughout the years, but we found that 14 to 16 is a comfortable ceiling for us, sort of our sweet spot. Right now, because of COVID, we have nine, and I think that’s a good size to handle during a pandemic. The application process is the Journalism School’s process, so there are standards that they have to meet just when it comes to their writing abilities, their desire, their personal essay, and all of that. And if they want to pursue documentary, they have to write an additional essay explaining why they want to make a documentary. You can think documentaries are cool and you like watching them, but can you communicate to us why you really want to make a film? Because, as you have probably gathered from this conversation, it’s a lot. It’s a demanding year. So we really want to find out who is able to cross that threshold.

D: Is there anything to add before closing?

BW: I would say that the range of documentaries in the years that I’ve been working on the program is pretty wide. You have students who are doing investigations, films that are very serious reporting and deep dives into corruption and misdeeds, and then you have first-person stories, more personal reflections. They range. We don’t try to limit them in any way except that we do want them to be fact-based. We want them to be journalistic, to be true. And I think that’s certainly the hallmark of the program.

TN: We don’t teach advocacy filmmaking. We teach journalistic filmmaking, and not to make too fine of a point, but everything that our students do is very rigorously reported. And what we saw this year was very heavy in the public-service journalism department, but a lot of that had to do with the circumstances of the pandemic. Over the years, our program has evolved to be more character-driven, how people are affected by policies or the environment, but it’s all rooted very much in journalism.

Tom Gianakopoulos is a contributing editor at Documentary. In an asynchrous reality, he teaches English and Communications at American Career College in Los Angeles, where he hopes to one day return with his fellow instructors to teaching on campus.