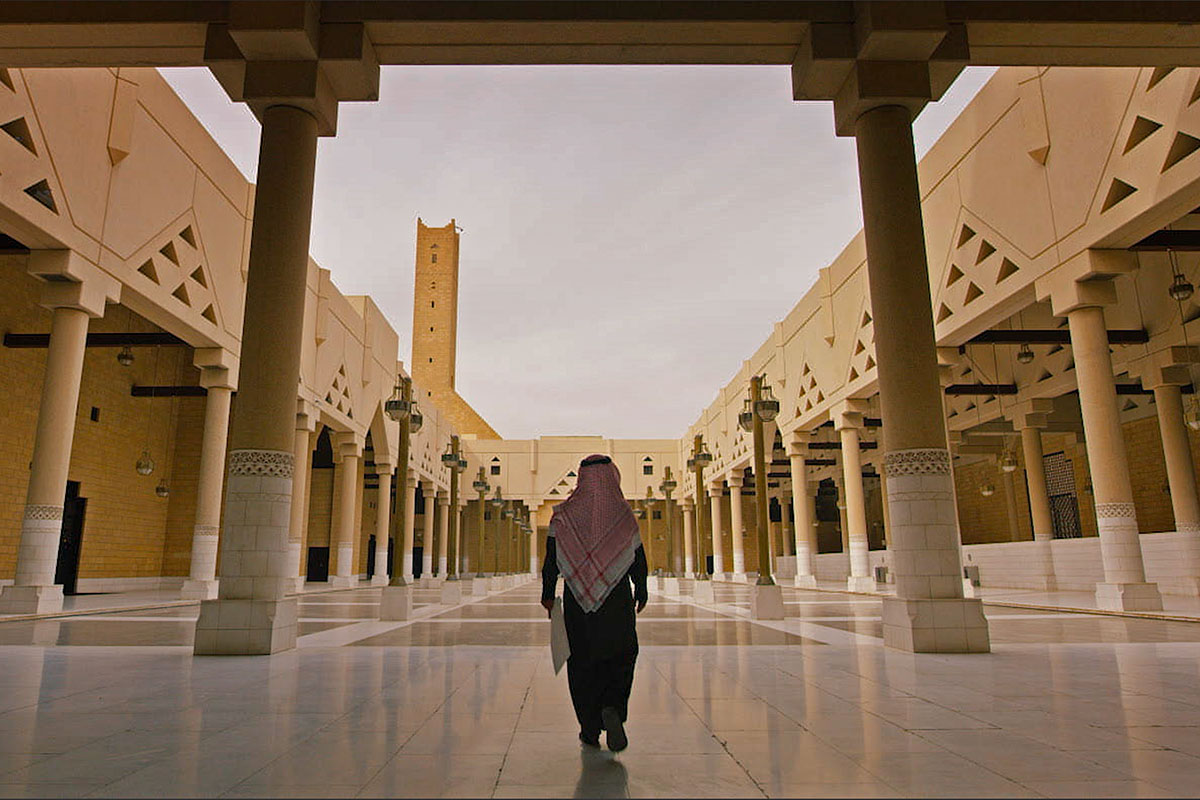 This past weekend I got cozy on my living room couch and attended my first screening of the 2022 Sundance Film Festival— the premiere of Meg Smaker’s Jihad Rehab. The film’s hapless title manages to be both inaccurate and offensive—“rehab” refers to an incarceration facility in Saudi Arabia and the casual equation of the word “jihad” with terrorism is offensive to Muslims—and foreshadows the next 108 minutes of the film.

The film focuses on four Yemeni men, at least two of whom were teenagers when they were detained by the US military and later imprisoned in Guantanamo. After being tortured and held without any judicial process for 15 years, the men are transferred to a prison in Saudi Arabia where they are allegedly rehabilitated by the state. “With empathy and extraordinary access Jihad Rehab is a powerful document,” reads the film’s synopsis.

From the very first frame, it is not empathy, but a clear presumption of guilt that imbues the film. I was immediately struck by the filmmaker’s voice, not dissimilar to a military interrogator, as she cross-examines the film’s participants with leading questions, asking again and again about their alleged crimes and attempting to goad them into confessions. She identifies the men in the film with text on screen that emulates a “rap sheet” (the filmmaker’s words), effectively condemning these former child-soldiers—all of whom maintain their innocence throughout the film and their near 20 years of imprisonment—as terrorists. In one scene, a participant is out on a probationary period from the “rehab” prison, and pointedly asks the filmmaker not to film him because of potential endangerment. She callously does so anyway and dramatically scores the scene for the audience’s benefit. Two of the four Yemeni men she features ask her explicitly to stop filming them, visibly disturbed by the filmmaker's patronizing posture. The basic duty of care and ethical responsibility a documentarian is expected to have with their participants is dangerously lacking.

The filmmaker bills herself as an expert of the Middle East, with a “lust” for conflict zones, and claims that her fluent Yemeni Arabic is what eventually won her access to the film participants. But Arabic is my mother tongue and I immediately clock that Smaker’s elementary Arabic, primitive words cobbled into crude sentences, barely carries an Arabic accent much less a Yemeni one. To see my language and the homelands of folks in my community, used as backdrops for white savior tendencies is nauseating. The talk is all empathy, but the energy is Indiana Jones. In her self-avowed mission to “humanize” these participants, Smaker succeeds only in recycling “War on Terror“ narratives and reaffirming Orientalist tropes about Arab and Muslim men.

Though it’s unsurprising that these stereotypical narratives continue to proliferate two whole decades after the “War on Terror” began, what is astounding is that this film was given a platform by the Sundance Film Festival. Disturbed by this, a group of Muslim and Arab filmmakers got together and started organizing; we surveyed the past 20 years of publicly available documentary programming at Sundance and found that they had programmed a total of 76 films in the US and World Documentary Competitions about people that are Muslim, people from the Middle East and North Africa (MENA) or films set in the MENA region. Less than 35% of these films were directed by Muslim or MENA filmmakers, and when it comes to films about the wars in Afghanistan, Iraq and Syria—the predominant lens through which Muslims and Arabs have been depicted in documentary—a staggering 75% of these films were made by non-Muslim or non-MENA filmmakers.

Despite the many statements around “diversity, equity and inclusion” and fervent conversations happening across the film industry about representation and authorship, the numbers tell another story, a truth many of us have known for years.

The sheer lack of interest in telling nuanced stories from a Muslim or MENA perspective is an industry-wide problem spanning both documentary and fiction film. In “Missing and Maligned,” a landmark study by USC Annenberg that looked at portrayals of Muslims in 200 top-grossing movies released between 2017 and 2019, they found that more than 90% of films had no Muslim characters and that when films did portray Muslim characters, they were often limited to being depicted as either perpetrators or victims of violence. The study also found that on-screen depictions of Muslims have direct consequences on policy and legislation, and translate to less safety for Muslim communities.

As an alumnus of the festival and recipient of a grant from the Sundance Institute Documentary Program, I am deeply disheartened. Caught between a hard place of invisibility and hypervisibility, I as a Muslim filmmaker feel trapped by my industry. One that signals that the only Muslim stories that will be championed are ones that frame Muslims as terrorists, or ones that are principally concerned with “humanizing” us. In her essay “Beyond Empathy,” documentary film strategist Sonya Childress writes, “When we use film to build empathy for marginalized groups, we normalize whiteness by confirming the notion that whiteness is the lens through which others are viewed, understood and judged.”

When the empathy model is imposed, it chokes out room for films rooted in a liberatory framework, political art not intended to cajole sympathy but to make “revolution irresistible,” as Toni Cade Bambara puts it. When you are still trying to convince folks about your humanity, when the tyranny of the empathy machine is imposed, where is the space for Muslim creatives to make beautifully intricate, nuanced films that center our positionality? Films that concern themselves not with war, but with life?

From a Sundance panel conversation with Muslim filmmakers hosted by MPAC and the Islamic Scholarship Fund, what Muslim filmmakers want is abundantly clear. We want to weave narratives that reflect us back to ourselves, tell stories that build power and solidarity within other communities and across identities, and build structures that enable us to create culture from a place where our subjectivity is always assumed. In our full humanness, we turn our backs to the dominant narrative and proudly center our diverse communities, our languages, our stories, our culture—filming on the inside looking around. Using the hashtag #MyMuslimFilm, filmmakers have taken to social media to shine a light on those stories this week.

Whether Sundance and the gatekeepers of our industry continue to ignore our stories isn’t the central question—we aren’t waiting for a savior. We have long told our own stories and will long continue to film our communities in all of their nuanced glory. But the normalization of stereotypical narratives about Muslims and people from MENA will invariably continue to lead to an impoverishment of culture, to racist and harmful policies and to the endangerment of entire communities. Whether Sundance and the field are ready to take accountability for their role in all of that is the central question.

Assia Boundaoui is an Algerian-American filmmaker and investigative journalist who has reported internationally for PRI, BBC, AlJazeera, VICE and CNN, among others. Her debut short film about hijabi hair salons, for HBO Documentary Films, premiered at the 2018 Sundance Film Festival and her feature debut, The Feeling of Being Watched, premiered at the 2018 Tribeca Film Festival. She is a 2022 United States Artists Fellow and a Ford Foundation JustFilms fellow hosted at the Co-Creation Studio at the MIT Open Documentary Lab, where she is iterating a co-created AR-fueled sequel to her film, The Inverse Surveillance Project.

Editor's Note: The author referenced a total of 76 films that Sundance has programmed in the US Documentary Competition over the past 20 years about people that are Muslim, people from the Middle East and North Africa (MENA) or films set in the MENA region. That total also comprises the festival's World Documentary Competition. We have made that correction.

Also, we have made corrections to clarify the documentary participants' age and their reluctance to be filmed.