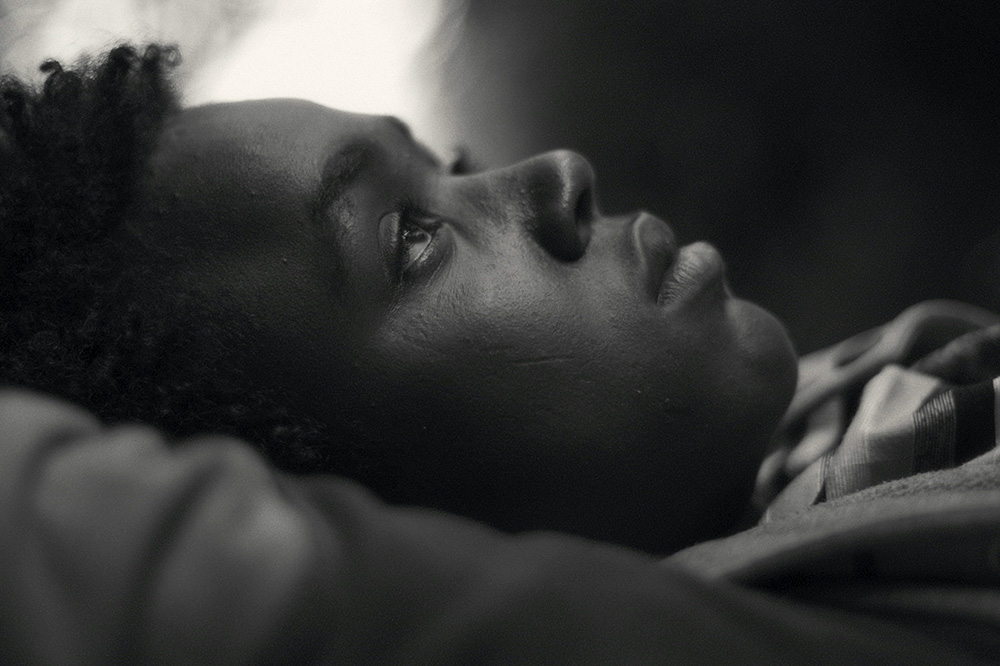 “Memories, that is all you travel with,” Ibrahim Mohammed, a young man from Harar, Ethiopia, tells a much younger Mohammed Arif in Jessica Beshir’s debut feature documentary, Faya Dayi. Beshir, like the men in her film, grew up in Harar. “It was the Cold War and Harar was a military strategic point. My father is a surgeon, and I grew up in the hospital watching droves of soldiers coming in from the front,” Beshir tells Documentary, shortly before the theatrical release of her film, following a festival run at Sundance, Hot Docs, Full Frame and others. She moved to Mexico during Ethiopia’s communist regime, and then moved to the US after high school, where, by then, most of her Ethiopian friends were political refugees.

In Faya Dayi, Beshir frames the walled city of Harar with a kind of love and longing that is soft, languid and viscous. Her camera lingers on people’s faces, their hands and eyes, and watches on as the light and shadow play on their surfaces—reflected through veils, windows, lace and leaves of trees. There is a stark beauty in the ordinariness of lives in Harar that comes through in Faya Dayi. Is it nostalgia? “I don’t think so,” Beshir says. “The film is not about having nostalgia for this or that. You only have one childhood, and you have your childhood memories. You can't just transplant them elsewhere. Or onto film.” Beshir started working on the film in 2011, when she went back to Ethiopia to see her grandmother, acting as a conduit for messages exchanged between her father and his mother. “This reconnecting helped me remember,” she recalls. “And in this process of remembering, I began to notice changes. Maybe things that were there before that I had not seen. When I looked at these things as an adult, I realized that what I was seeing in front of me was a result of many political changes, social changes, economic changes happening in the country.”

Beshir remembers seeing expanses of farmland of varying colors in the Harar of her childhood: maize, coffee and other cereals. “But now, there is this one blanket of green,” she notes, referring to khat, the stimulant plant that is now among Ethiopia's largest exports. It is easy to grow, needs less labor, is less vulnerable to drought, and has a ready market ready to buy it all. Khat also encourages a widespread addiction problem among growers and their surrounding communities. “It is a plant that was considered sacred,” Beshir explains, recalling the small plant her grandmother grew in her backyard. “Muslims have used it, for millennia, for their meditations, for their chants, to stay up all night because it keeps you up. It has a certain amount of amphetamine, and there is a lot of ecstasy in that. People who consumed khat found that ecstasy within it, and they would offer that to God. When it goes mainstream and people just start consuming it without its proper context, then it becomes something else. Then it becomes an addiction.”

As audiences, we are aware of how documentaries made on addiction in Africa almost always pathologize the situation with a God-like gaze that wants to solve the problem at hand without problematizing the deeper sociocultural dynamics that undergird it. “I wasn’t interested in that,” Beshir maintains. “For me it was about the interior lives of people, whose stories may or may not lead to a certain state of addiction. What interests me truly are the matters of the soul. Our souls are going through a lot of things, and there are things we need to do in order to survive. Sometimes, addiction is a survival mechanism for something you're going through, and you might not be able to articulate it. I am not here to glamorize this or that.”

Khat is ever-present in Faya Dayi, its leaves holding within themselves countless myths and love stories. Mouths chew them, fingers sift through them, and feet walk over them. Even when we don't see its form on screen, we feel its reverberations, the intrinsic ways in which the merkhana—the crest of the euphoric high and the trough of silent introspection—pervades every life in Harar, each striving to make things better for themselves and their loved ones. There is a rhythm in the stories Beshir tells, a music that always plays under the surface, an unhurried slowness that lets us immerse ourselves in the richness of Beshir’s black-and-white cinematography, a beauty that is so surreal that it looks otherworldly, yet familiar.

An imam Beshir met in Harar told her while she was still filming, “Look. This place here, it doesn’t work with your time, with the notions of time. It has its own time. And the more you surrender to it, the more things that are gonna happen for you. The more you want to impose some other time notion, the more it's going to be elusive. You choose what you want to do. Because, here, time has a different dimension.” Time, like the walled city of Harar, is shaped like a labyrinth and it is best to surrender when telling its story. Faya Dayi is a song about that surrendering. “It forces you to be in the present because the present is all you have. You cannot see far away, so you keep looking at what lies in front,” Beshir explains.

Faya Dayi is a political film. It talks of the conflict between the Oromo people and the Ethiopian state; of the helplessness of khat farmers in the hands of global capitalism; and of the unavoidable labor migration that takes mothers and fathers away from their children, and lovers away from one another. It is a cyclical retelling of a story we’ve heard before but it is told so beautifully, and with so much empathy that it strikes us with a rawness we’ve barely felt before. "Today is like yesterday. And tomorrow is going to be like yesterday," Beshir recalls Mohammed Arif’s words. Nothing changes, yet everything moves—like the eternal journey khat makes from the harvest fields to the markets, and into people’s souls. Faya Dayi is a political film that isn’t about the griminess of politics, but the lives it touches and alters beyond recognition in small, indistinct, permanent ways.

The politics of khat are easy to read and memorize; it is the social fabric of Ethiopia it colors that is hard to discern. Beshir took almost a decade to immerse herself into this culture that is at once hers and alien to her, given the gulf of the many years she spent away from it. “My soul couldn’t allow me to think of anything else, it just kept bringing me back to this. It’s that voice that talks to you,” Beshir says, “That something that compels you all of the time. You felt it through so many years but you've never seen it. With Faya Dayi, it was like giving an image to that thing I had inside me. With the release, I am like, Okay, I meet you now.”

Do you like what you see and who you meet?, I ask as the late summer sun seeps into Beshir’s Brooklyn home, thousands of miles away from Harar, yet so close that you feel you can touch it. “I felt this film before I saw it,” she affirms. “Filming it was like an extension of that feeling. To see the articulation of it, is like getting to know yourself. I'm learning to do that. I do like what I see.”

Faya Dayi opens at Film at Lincoln Center in New York City on September 3, and at the Laemmle Royal in Los Angeles on September 17, through Janus Films.

Bedatri D. Choudhury is Managing Editor of Documentary magazine. Born and raised in India, she lives in New York City.

END_OF_DOCUMENT_TOKEN_TO_BE_REPLACED

Archives as Alter Ego: The Inventiveness of Kim Longinotto's 'Shooting the Mafia'