By Elizabeth Mirzaei and Gulistan Mirzaei 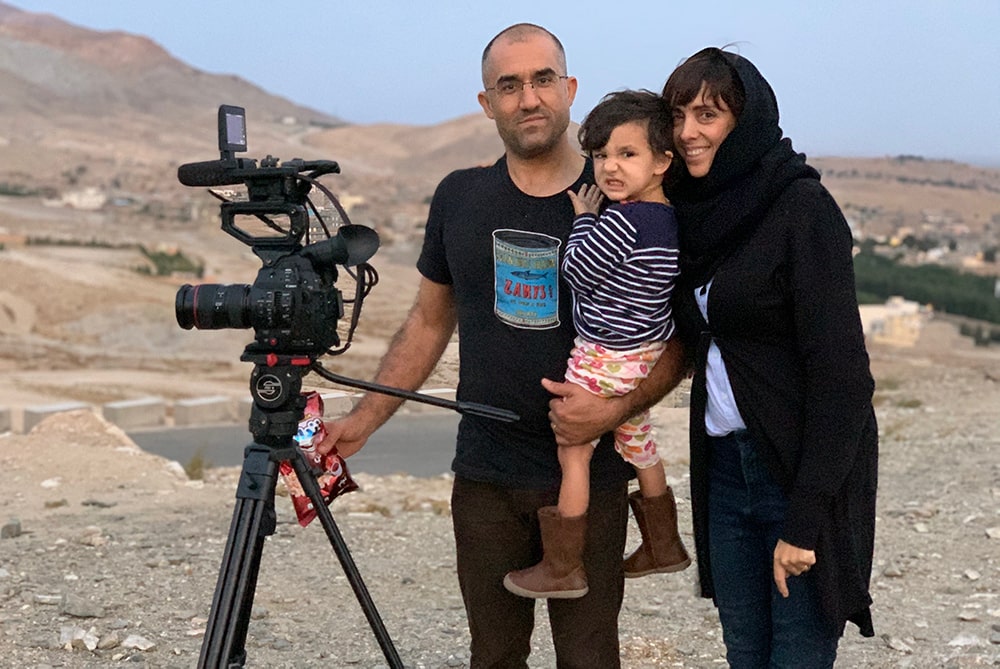 We are writing this with sleepless eyes, shaking hands, and knots in our stomachs that grow tighter with each bit of news coming out of Afghanistan, as if an invisible but unbreakable string connects our hearts over continents and oceans. There is an Afghan proverb in Dari, “Dil ba dil rah dara"; There is a way from heart to heart. And our hearts, while broken, are not shattered. We believe Afghanistan is worth fighting for and we won't give up on the country we love.

We are Gulistan and Elizabeth Mirzaei, an Afghan/American couple and documentary filmmakers, deeply grieving and troubled about the situation in Afghanistan. Afghanistan, the country where we first met at a Kabul gas station 14 years ago; the country where we fell in love; the country that gave us so much and took so much away. Afghanistan’s story is part of our story too; inextricably intertwined with our own, coursing through Gulistan’s bloodlines and family history and through Elizabeth’s heart. There are not adequate words in the English language to describe the country’s majestic beauty. The rolling hills and low soft clouds of Badakhshan province, the melons of Takhar, the scent of saffron, the wrinkles on our aunt’s face—deeply etched, like a map.

Shards of memories keep swimming in our heads: the tart and creamy taste of quroot; the way our relatives shout to be heard over the rushing blue Panjshir river; the deep red of pomegranates. And mingled with this beauty are the painful memories of friends shot to death; the constant drone of helicopters passing over us like giant mechanical bees in the sky; the sorrow in the face of a cousin after her husband—the family’s sole provider—was killed by a suicide attack; the newborn named Esmatullah in the camp for displaced people who was so malnourished that his face was young and greatly aged, at the same time. We remember how the doctor at the hospital we brought him to said, “Maybe this baby will become the next president of Afghanistan.” They could not save him. This mix of joy and sorrow, forever existing simultaneously in Afghanistan, is something we have tried to capture in our films.

For years, with many of our friends and family, we worried about the possibility of what is happening now in Afghanistan. But even then, it managed to feel fragile and remote enough to allow us to convince ourselves that it would not actually come to pass. We remember Kabul in 2014, and the widespread fears of the planned American departure. People speak of 2014 as if it was a dark line drawn in the sand demarcating the end of an Afghanistan we knew. But the worst fears of 2014 didn’t realize until 2021. Even today, that line doesn’t mark an end; we don’t believe Afghanistan is beyond hope.

We have family members in Kabul and elsewhere in the country, and dear friends too. In our calls with them we can hear in their voices, in spurts within the despair, fleeting moments of levity and humor. Someone in our family has been complaining of leg pain for years. She went to the market and was startled by Taliban gunfire. Her leg hasn’t hurt since she ran back into her house, she told us before bursting into laughter. Even in the darkest and most desperate of times, there is light.

The feeling of having our hearts split between two worlds has never been more pronounced for us as we watch and listen to all of this sitting in the United States, where we now live. We were boarding a plane in a lonely, quiet American airport as scenes of chaos unfolded in the Kabul airport. How can this be, we thought? Our minds are neither here nor there, but in both places at once. The worlds have collided. These days, the California sky so easily blurs into and becomes the Kabul sky. The phone rings all the time. We are dashing off letters of support as quickly as possible, in between feeding the baby and getting the kids dressed. And even when we sleep, it is as though the darkness of the Taliban enters our bed, our phones glowing late into the night, the sound of gunfire, the shaky voice of our niece echoing through the house, mingling with the laughter of our children who are blessed to be young enough to not be able to grasp what is happening in their other homeland. We look at our children's faces, their otherworldly innocence, and think of all the mothers and fathers staring into their child's face in Afghanistan, unable to fully shield them from human cruelty.

Along with our family, we are deeply concerned for Shaista and Benazir, the protagonists of our recent short film, Three Songs for Benazir, a love story of two Afghan teenagers in a Kabul displacement camp and the profound choices they make to build a life together. It is a film we worked on for over eight years and one that, despite having no funding or support, we turned every stone to make. For years, we have watched the story of Afghanistan being presented through a particular lens—war, poverty, abuse, decay. The world seems only interested in stories that fit a certain narrative. Shaista and Benazir, with their love, resilience, and their songs, defied that at every turn. When the film won the Jury Award for Best Short at Full Frame in 2021, they were just as delighted as we were. It is our great hope that they remain safe, and continue to tell the story of real, innocent Afghans who live in love and smiles.

We are working to get Shaista, Benazir, and our producer out of Afghanistan as soon as possible, as they face direct and immediate threat to their lives. This is an incredibly complex situation and thousands and thousands of people are desperately in need of help. We wish we could help them all. We urge you to contact us at helpthreesongs@gmail.com if you’d like to lend us a hand. They need our help, and we can’t do this without you.

If you’re a member of The D Word community, we recommend keeping an eye on their special topic for up-to-date resources and real time information on helping out within a constantly shifting situation. Please read our colleague James Longley’s call to action, and the appeal shared by filmmaker Sahraa Karimi. We are, sadly, limited in our capacity to help but the task at hand is limitless.

Your support is critical. Lives sit perched on a very delicate and macabre balance—lives dear to us, lives abandoned in their most critical moment. Don’t stop fighting for the safety of the Afghan people and don’t give up on Afghanistan when we need you the most. It's a dark moment and the world and its many powerful forces have allowed this to happen, but this is not the end.

We say “shab dar miyan ast, khoda mehreban ast". Even in the middle of the night, God is kind.

Elizabeth and Gulistan Mirzaei are documentary filmmakers whose films have played at CPH:DOX, Locarno, Edinburgh, Bergen, Full Frame, and Santa Barbara among others. Together, they founded Mirzaei Films to be an indigenous window into modern-day Afghanistan, making films that are recognized for their intimacy, rare access, and how they challenge perceptions of Afghanistan. They are based between California and Afghanistan and have two daughters together.