Sociopolitical Documentaries at CPH:DOX 2021: Is This What Democracy Looks Like? 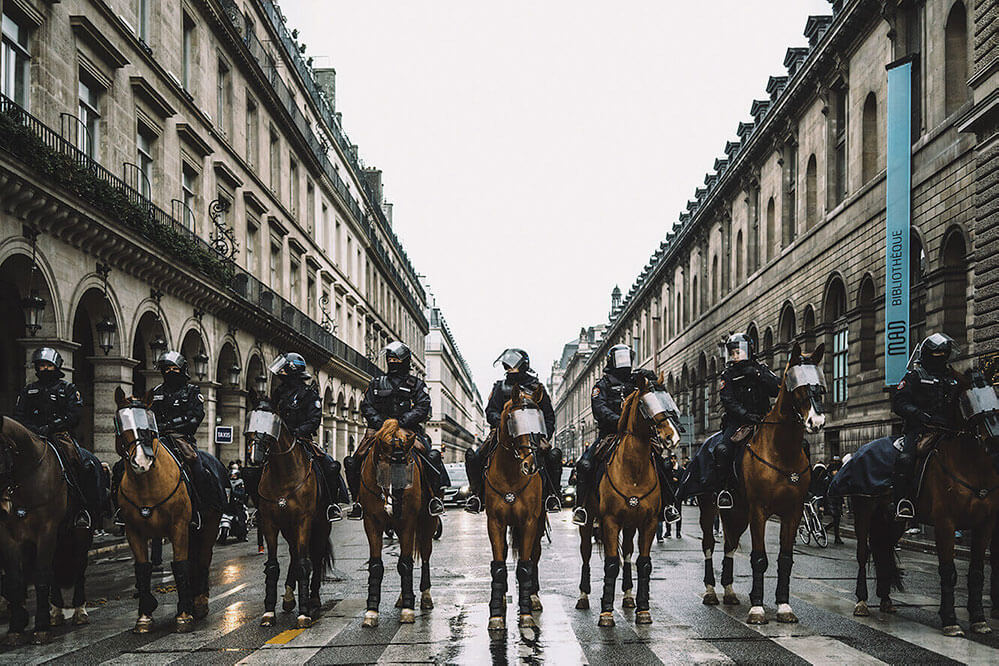 If CPH:DOX is any indication (and it usually is), 2021 seems set to see a transformation in sociopolitical nonfiction cinema. Rather than, say, merely probe the psychological motives behind intriguing bad apples, a slew of films are now choosing to use their characters as conduits—as a means to explore the systems enabling said individuals, and to instead hold our collective actions and inactions accountable. As Ed Snowden notes in Sonia Kennebeck’s United States vs Reality Winner (which screened in the "Justice" section), "There are going to be people, in every time and every place, who see something wrong and go, 'That’s my problem.'" The Copenhagen International Documentary Film Festival continues on its own mission to showcase artistry as solution.

And perhaps taking the mission most literally this year was Aliaksei Paluyan’s Courage. Playing in the "Change Makers" program, Paluyan’s jaw-dropping film follows a trio of brave Belorussian actors whose longtime pro-democracy activism within the staged confines of the underground Free Theatre unexpectedly becomes unrehearsed reality on the streets.

With exceptional access, the Belarus-born, Germany-based director keeps his lens trained on Maryna, Pavel and Denis—all blacklisted from the Belarus film industry—as they go about their daily dissident lives during the most recent protests against Europe’s "last dictator." And in lieu of giving President Alexander Lukashenko and the corrupt elite any screen time, Paluyan chooses to capture the visceral citizen backlash, the real-world result of nearly three decades of one-man rule. We watch as the comrades prepare their arrest kits—toothbrush, toilet paper, passport—and remind each other to delete Telegram. We bear witness to the thespians’ strategizing for the wider crackdown to come, while nervously supportive partners and children quietly drift in and out of the frame.

The sound of cars honking in solidarity is met with stun grenades. Outside a prison, as desperate relatives await the fate of loved ones, fury and tears hit a wall of anonymous guards in balaclavas. And yet, back on the frontlines, a single riot officer places a flower on his shield, prompting protestors to rush up and embrace him. A massive crowd gathers to mourn the dead, their moment of silence followed by goosebump-inducing chants of "Thank you!" over and over again. "The regime is preparing for something that has happened before, but the people will find a new way to protest," one man asserts. Even though "72% of Belarusians find it difficult to define the word democracy" (according to a 2015 Free Theatre production), they most assuredly know what it’s not. Or in a line from the final play—about a woman whose husband was the victim of a political assassination decades ago—"True happiness is when you go to bed with the same person you dream about." Indeed. Democracy, like both the attribute of the film’s title and the film itself, is at its core a sensation. It’s the feeling, no less, of being free.

So how does a nation go about extinguishing that power-toppling desire? That’s one of multiple animating questions behind Avi Mograbi’s chillingly riveting The First 54 Years—An Abbreviated Manual for Military Occupation. Resembling an Orwellian webinar for covert extermination, the doc stars the provocative Israeli helmer himself, who leads us on a satirical, half-century journey deep inside his country’s insidious occupation of Gaza and the West Bank.

Through heartfelt first-person testimonies from former soldiers, we learn that generations of forces witnessed—and in some cases took part in—horrific deeds in the name of Israel, and are now forever traumatized as a result. Indeed, both perpetrators and victims seem stuck in an endless Kafkaesque cycle of abuse. Thus it’s difficult to discern whether these military men (and they are all men onscreen) truly meted out punishment because Palestinians were provoking them (and usually with only rocks and words), or were they just taking out their frustration at a government policy that put them in this awful position in the first place? Such is the inherent madness of a system of occupation.

Religious settlers, exempt from conscription, serve as shock troops. Random Palestinians are enlisted to inspect suspicious objects on the road. Every Palestinian is viewed as "a ticking time bomb that must be dismantled," and gunfire is "a form of communication." Which, ironically, culminates in Israel’s explosive social experiment replacing the "question of Palestine" with a more salient, if unintended, query: How long can a country carry out a psy-ops mission before that mission irreversibly turns on its implementers?

Though David Dufresne’s The Monopoly of Violence doesn’t broach that particular dilemma, it nevertheless takes the baton from Mograbi’s cinematic treatise and runs with it all the way to streets of Paris. While media from around the world may have covered the Yellow Vest protests—along with the Macron Administration’s disastrously heavy-handed response—Dufresne’s eye-opening doc chooses to use the event as a broader case study, a way to burrow deep into the Max Weber thesis from which the film takes its name.

Here in the "enlightened" West, the social contract establishes that citizens consent to the violence of policing in return for their safety. But what happens when that contract is broken, when the police no longer provide for that safety? Shouldn’t it follow that law enforcement no longer has the right to violence? And what then?

This abstract debate is given flesh-and-blood weight through Dufresne’s deft decision to feature not only Yellow Vest protestors—all of whom bear emotional and often physical scars—but also an array of philosophers, as well as actual officers. And the French director does this by inviting them all into a darkened screening room to revisit and discuss scenes from the riots. What emerges is no consensus, but it’s certainly a surprise.

For example, the footage reveals violence but also "restraint of violence"—as when the police are outnumbered and the protestors choose to let them fall back and get away. (Speaking of restraint, French officers often make US police look subdued; forces are mandated to prioritize the state and its interests above all.) And like with Mograbi’s Israeli soldiers, the police at one point are referred to as "victims," too—of the state and the system, of its monopoly on violence.And similarly crucial to the state is "symbolic violence"—showing the populace (especially the Black and immigrant segments) who is in control. Far too often it’s the revolutionary violence that grabs headlines, while the institutional violence that spawned it is ignored. While power is usually amorphous, demonstrations ultimately render it visible. As one guy points out, picking up a piece of broken glass from a bank building is holding the collapse of power in your hand.

Another man speaks passionately of Jean Genet’s notion of violence—as a necessary part of life—versus brutality. Smartphones have become so threatening to the powers that be because they actually upend the panopticon. Now the all-seeing eye lies in the very palms of those being overseen. And while France may have been categorized as a "Flawed Democracy" on The Economist Intelligence Unit’s Democracy Index scale, it’s still far from the "Authoritarian Regime" designation that Russia received. Or is this really just a matter of tactical deployment—Macron’s taste for "repressive" violence versus Putin’s preference for "preventive" violence? The latter stops demonstrators from assembling by arresting them in advance, whereas the former lets them assemble before arresting them. And while the Russian state values public order as a sacred good, Western democracy, in the words of one elderly woman, isn’t consensus but "dissensus." Tumult is the "life blood of democracy." Which could also be why those at the top seem so perilously dead-set on draining it.

END_OF_DOCUMENT_TOKEN_TO_BE_REPLACED

CPH:DOX's Directors on Reinventing the Film Festival During the COVID-19 Chaos