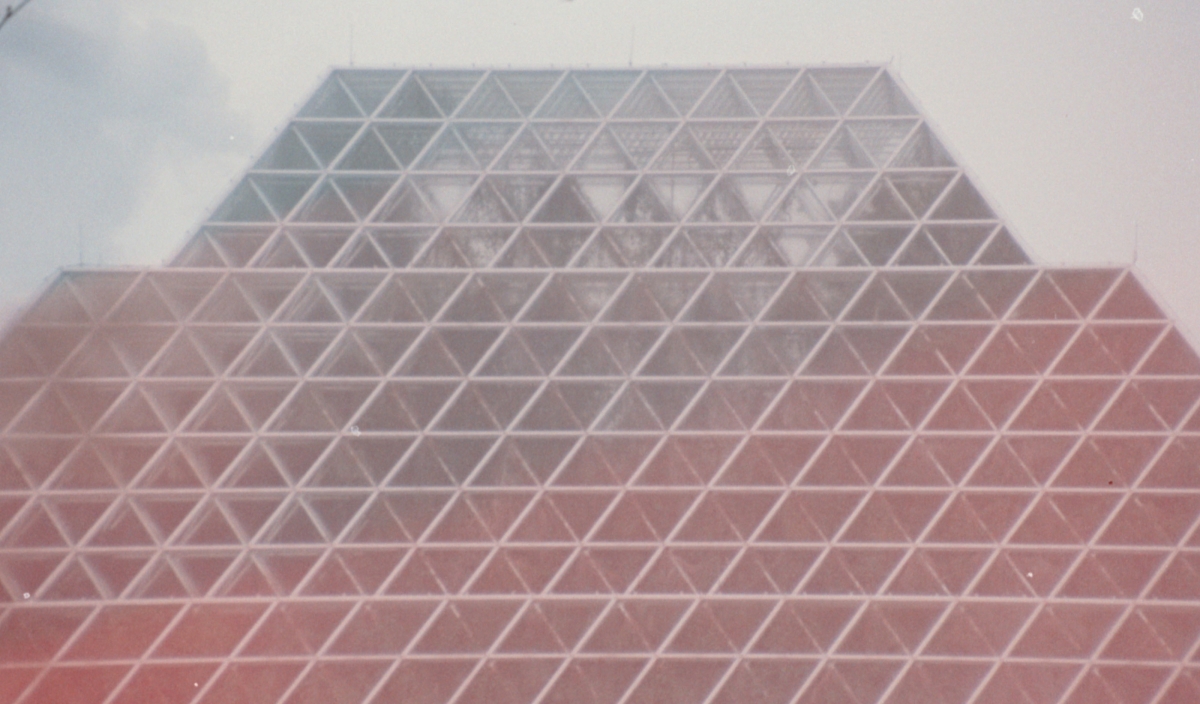 In humans and in landscapes, documentarians have two enormous subjects at their disposal without having to look far, and inexhaustible potential in the convergence of the two. At CPH:DOX's NEW:VISION, a competition that collects works from artist filmmakers working in a documentary mode, the landscape loomed large. From this year's selection, four films foregrounded the landscape, in varying ways and through various means.

The latest film from prolific British filmmaker Ben Rivers, following a few films that have taken him in new directions, marks a return to more familiar territory, and also to form. A "hermit portrait" in the style for which he has become best known (Two Years at Sea, What Means Something, I Know Where I'm Going), Urth takes place within Arizona's Biosphere 2. A pyramidal artificial biome that was the site of a failed experiment into closed-system sustainable living in the 1990s, it's an unsurprising object of fascination for a filmmaker intrigued by off-grid lifestyles and natural retreats, and one he captures effectively.

In between shots of the various flora, many seen in abstract close-ups that focus more on the plant's varying textures and colors than their role within the biosphere, Rivers inserts material showing the structure's distinctly extra-terrestrial-looking exterior, accompanied by disorienting bursts of pulsating sound. A glass monolith of rising pyramids and tessellating, terrarium-like glasshouses, the now disused space is at once alien and familiar, retaining a sense of what it must have looked like in its prime, but made ghostly by the presence of time. Captured with a characteristically good eye, Rivers' images are set against a soundtrack of fictitious audio diaries from a female resident of the biosphere. These recordings - co-authored by sci-fi writer Mark von Schlegell and inspired by Mary Shelley's The Last Man - slowly reveal a narrative of the descent into madness of the last woman on earth and serve as the perfect counterpart to Rivers' evocative, atmospheric, 16mm imagery.

It's almost a shame that a filmmaker's work would be most appealing when it arrives in the most familiar fashion, but Urth is an ideal mix of the earthly and the interplanetary for Rivers, reminiscent of his speculative sci-fi short Slow Action (also written by von Schlegell) in its exploration of failed utopias and the continual allure of their futile promise, but made distinct by the inclusion of a female protagonist, the uniqueness of the location and Rivers' ever-increasing aptitude for depiction of this sort of organized, romanticized isolation. "The enormity of landscape is, for the most part, imagined," his narrator proclaims. Here he depicts a contained space - comprehensible, if unfamiliar when looked at from the outside, but made to seem unfathomably large by the sparseness of its physical interior, and the contrasting expansiveness of the mind of its sole, imaginary inhabiter.

Another hermit film of sorts is a short from British filmmaker Phillip Warnell, The Flying Proletarian, which also sets natural imagery against contemplative writings, tying the words of French philosopher Jean-Luc Nancy with the activities of lavender farmers at work. Warnell's Super 16mm images are serene and his selected musical accompaniments calming, making for a sensorial wash of moments of isolation. His film, while not particularly remarkable, has a delicacy about it, establishing a sense of tranquility through the sequenced observation of particularly poetic forms of process, a kind of labor that seems well established within place but entirely out of time.

What elevates the film are the brief interruptions that push proceedings into the fantastical: the farmer methodically chiming a triangle in a cave, or the appearance of a beak-masked plague doctor in the forest - moments that are inexplicable, unannounced and more than a little unsettling. A filmmaker with an interest in the surreal potential of the natural world, Warnell, in his previous film, Ming in Harlem, profiled a New Yorker who chooses to share his apartment with a tiger and an alligator, and previous works have explored shared passages of elephant men (I First Saw the Light) and super-powered girls (The Girl with X-ray Eyes). 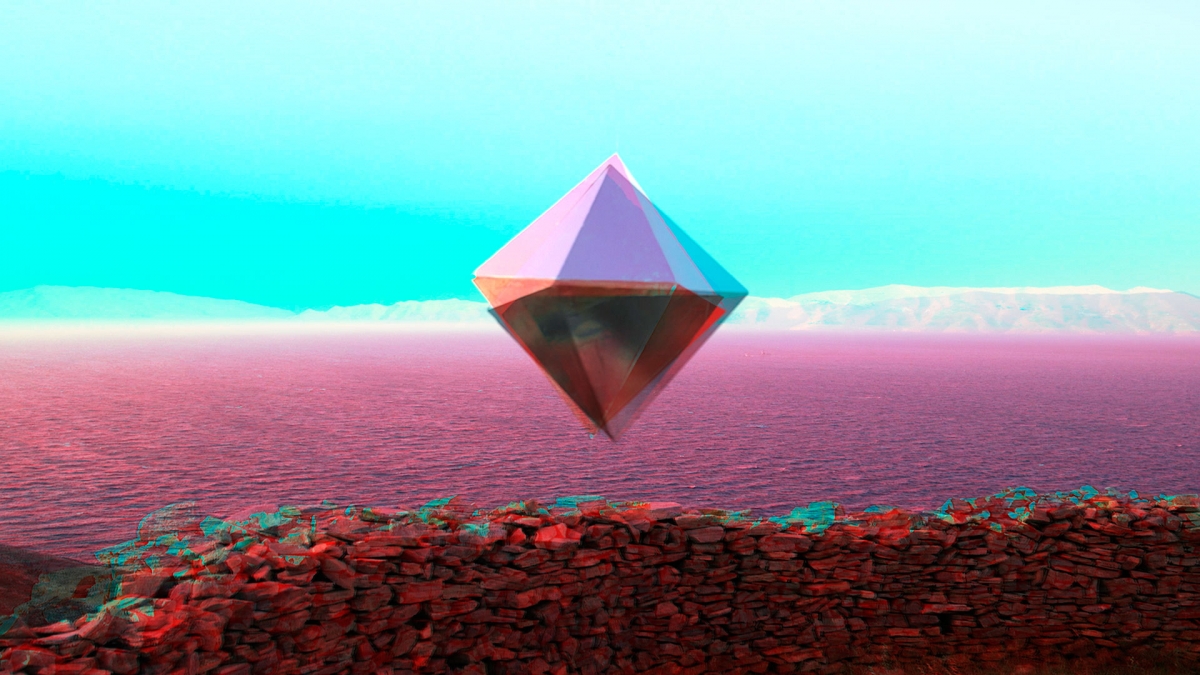 Stranger still, Deborah Stratman's Xenoi also features an intervention onto the landscape. The filmmaker, whose last feature, The Illinois Parables, investigated the histories buried in the soil of that state, moves her attention to less familiar land - the Greek island of Syros. Panoramically panning across beaches, caves and seascapes, Stratman shows a series of landscapes devoid of inhabitants, before inexplicably filling each space dramatically with a host of computer-generated, levitating, diamond-shaped objects that shimmer with light and radiate color. These structures, generated to conform to some kind of oblique mathematical formula, oscillate their form to an audience of none, alongside a host of disorientating, bellowing sound effects.

Eventually, the whole construct gives way to a flux of stereoscopic strobing effects, before transporting viewers into the mechanisms of an opera theater. While certainly captivating, what exactly this means is difficult to ascertain. Stratman's films are elusive by design - this one more than any. The choice of location - a troubled land, both historically and contemporaneously - and the arrival of these spectral forms that the director refers to as "unexpected guests," suggest it may be somehow related to spectatorship. Stratman's accompanying notes speak of a theater of "immutable forms, outside of time, aloof observants to our human condition." These forms are certainly aloof, but somehow the film is not, underscored by the emptiness of the locations and the comparative harshness of this landscape's invasion by these alien generations. Disquieting and obtuse, Xenoi is perhaps not the best entry point to Stratman's image-sound relationship experiments, but it is a distinctive one.

A more conventional landscape film was Lee Anne Schmitt's feature-length Purge This Land. Using the life of abolitionist John Brown as her center, the filmmaker spans a history of oppression in the US, filming various sites along a path Brown once took across the country. Schmitt starts with a quotation from the 1968 Kerner Report, in which the commission proclaimed that "race prejudice has shaped our history decisively," before charting instances of this assertion. Visiting locations tied to some of racism's many victims, from Emmett Till to Michael Brown, Schmitt tells the horrid stories behind the changing spaces, combating the erasure of these narratives by restoring them and retelling them, redefining and repurposing the meaning of the structures that have been built over their bodies.

Considering the intensity of the material at hand, Schmitt does well to include lots of space within the doc, moments of sporadic silence that allow the viewer to contemplate on that which has been presented, and shots that linger upon certain scenes, even those that at first seem devoid of importance or visual interest. Puncturing these expanses are some very effective music cues, a mix of material recorded by Schmitt's partner, Jeff Parker - some familiar-sounding, low-key jazz compositions and a number of shrill, guttural and extremely haunting clarion call-type pieces. Another climactic moment is the filmmaker's inclusion of a piece of narration that states that an individual she is discussing is "white like I am." Perhaps wrongly, the assumption up to this point might be that Lee Anne Schmitt is African American, though her close relation to this particularly horrific side of America's history, recent and still being written, shortly becomes clear: Her partner is black.

A film that comes immediately to mind in relation to Purge This Land is Brett Story's The Prison in Twelve Landscapes, another film from a white filmmaker that also uses various sites across America as a basis to explore issues related to race, mixing precisely composed observational material with an explanatory voiceover. Schmitt's film is not quite as visually interesting as Story's, and her methodology is more didactic. Yet, the act of charting this topography of suffering makes this a landscape film that packs more impact than most, and her relation to this pain even more so. Following up on the early film dedication to her son, Schmitt ends her survey of scarred landscapes close to home. Leafing through family photos, Schmitt describes the process that any parent of a child of color must at some point undergo - preparing the young for the danger of the everyday. Erased, forgotten and even well-recorded histories must constantly be retold in order to try to understand and remember the past, while strategies for living must be grounded in the immediate in order to try to ensure survival in the present day. Schmitt's film explains why - showing, precisely and viscerally, the continuity of racialized violence that has been, and continues to be, present in every inch of American soil.