A Space for Contemplation: "Creative Courage in Nonfiction Storytelling" at Getting Real 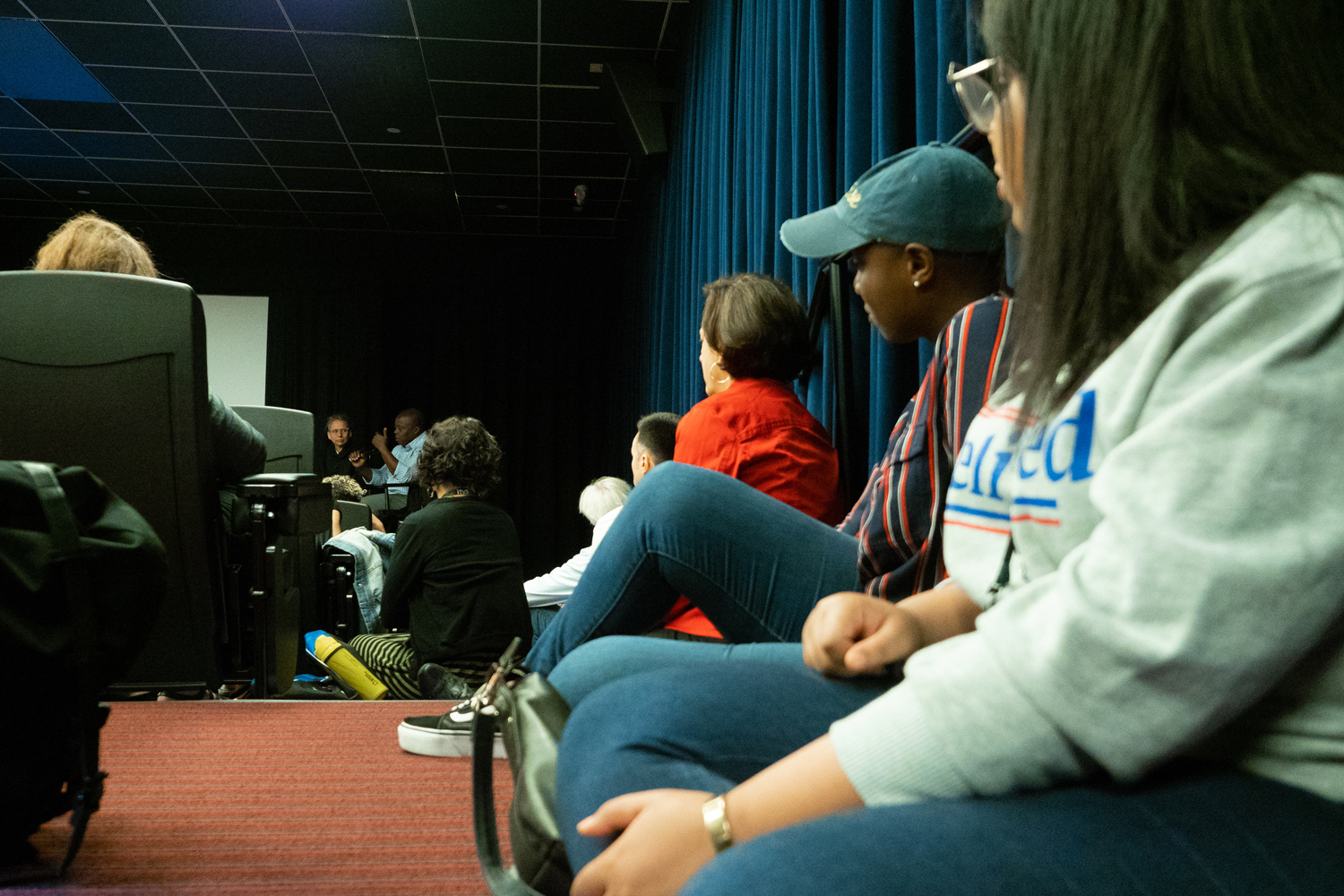 Alain Resnais said about Night and Fog, "I want to address the viewer in a critical state…to create a space for contemplation." In the Getting Real session entitled "Creative Courage in Nonfiction Storytelling," filmmakers Yance Ford, Jenni Olson and Jennie Livingston showed us how to do just that.

Taken together, their personal essay films—Ford's Strong Island, Olson's The Royal Road and Livingston's work-in-progress, Earth Camp One—reflect many of the formal choices that distinguish Renais' film. He insisted on concentration camp inmate and poet Jean Cayrol as the author of the narration. Silence and music by Hans Eisler focus the viewer's attention, along with extended tracking shots and landscapes of the barracks and the use of color for the present, in contrast to the black and white archival footage. And, he infused the work with shocking moments of humor. He did whatever it took to remember and ask why.

The session was a model for filmmakers discussing their work. Their rapt attention to each other's clips, their searching questions and their appreciation of the risks each had taken were adopted by the audience in an insightful Q&A.

The interdependence of the personal and political was a through-line in presentations and discussion. Livingston remarked about Ford's and Olson's works: "A personal film is really a political film and I think that is really true of both of your films."

Olson, who co-founded the LGBT online platform Planet Out.com, is a film critic and historian. The Royal Road, which premiered at Sundance in 2015, intertwines the violent Spanish colonization of California, Hitchcock’s Vertigo and Olson's own stories of love lost.

Olson described her aesthetic as a mix of "durational 16mm urban landscapes" and voiceover, with an "impact intent, an underlying political engagement, [and] social justice engagement, but a quirky approach to it."

The Royal Road is El Camino Real, the highway Olson follows from her home in San Francisco's Mission District to LA in pursuit of her romantic interest, Juliet. It is the path of conquest made by 18th century missionary Father Junipero Serra, "in reverse."

At the beginning of the film, Olson asks the viewer to think about her use of monologue by referencing the "posthumous opening voiceover sequence in Billy Wilder's Sunset Boulevard." A definition of voiceover fills the screen: "a special being, a kind of talking and acting shadow." During the discussion, she said she resisted performing the voiceover herself, until she pretended to be a fictional character and worked with a voiceover director.

Olson's narration builds on the theme of movies and identity. "Growing up in the Midwest as a gender dysphoric tomboy, emulating the actors in my favorite classic Hollywood films, I happily acquired a new borrowed masculine persona," she reflected. "Experiencing myself as a fictional character has been a mode of survival for me ever since."

Olson described her body of work as "a documentation of the landscape of California over the years." Her landscapes and narration are designed to "achieve an emotional state for the viewer."

Livingston is best known for Paris Is Burning, the 1990 groundbreaking portrayal of the gay and transgender black and Latino ballroom culture in New York that won the Sundance Grand Jury Prize and Best Documentary honors from the New York, Los Angeles and National Film Critics Associations. She works at the intersection of documentary and fiction. She is a consulting producer on Pose, which debuted on FX in June 2018, and she is slated to direct an episode in the second season. Livingston said she grew up in LA loving cinema that challenged "the way we construct things," telling untold stories.

Livingston catalogued the elements of her film: "Me narrating over images; archival stuff; film footage that my parents shot in 16mm; two audio archives. There's animation, interviews with experts about the issue of impermanence and fragility, interviews with people about my family" and a soon-to-be-produced musical number about death. "How much can I cram in?" she asked.

Earth Camp One is a literary meditation on loss and identity and on how American culture views loss and fragility. Its roots are in five Livingston family deaths from 1990 to 2000. Her father died of heart disease; her mother and grandmother of cancer; her brother Jonas of an accident involving pneumonia and drug use; and her uncle, director Alan J. Pakula, in a freak highway accident. "I'm trying to deal with this territory of the difficulty of surreal loss on top of the difficulty of dysfunctional families," she explained. "Americans can't deal with loss because it's really difficult and we want everything to be solvable. It's both a personal issue and a political issue if we can’t deal with the complexity of it."

In the clip she showed, her narration excavates the themes of loss, identity and fragility. "I was afraid to see my brother dead," she admitted. "He was a big guy who could wrap his arms around me and make me feel safe as no one else could. Looking at him, his big shoulders boxed in by pine, something happened before I could collapse or cry or scream. There was a rushing of sensation, like the way a hose pointed into a bottle and turned on full pushes the air out…It was joy, strangely arisen joy that forced out all the sorrow, the doubt, the anger at Jonas for doing something stupid that ended his life before I was done with having him in mine." 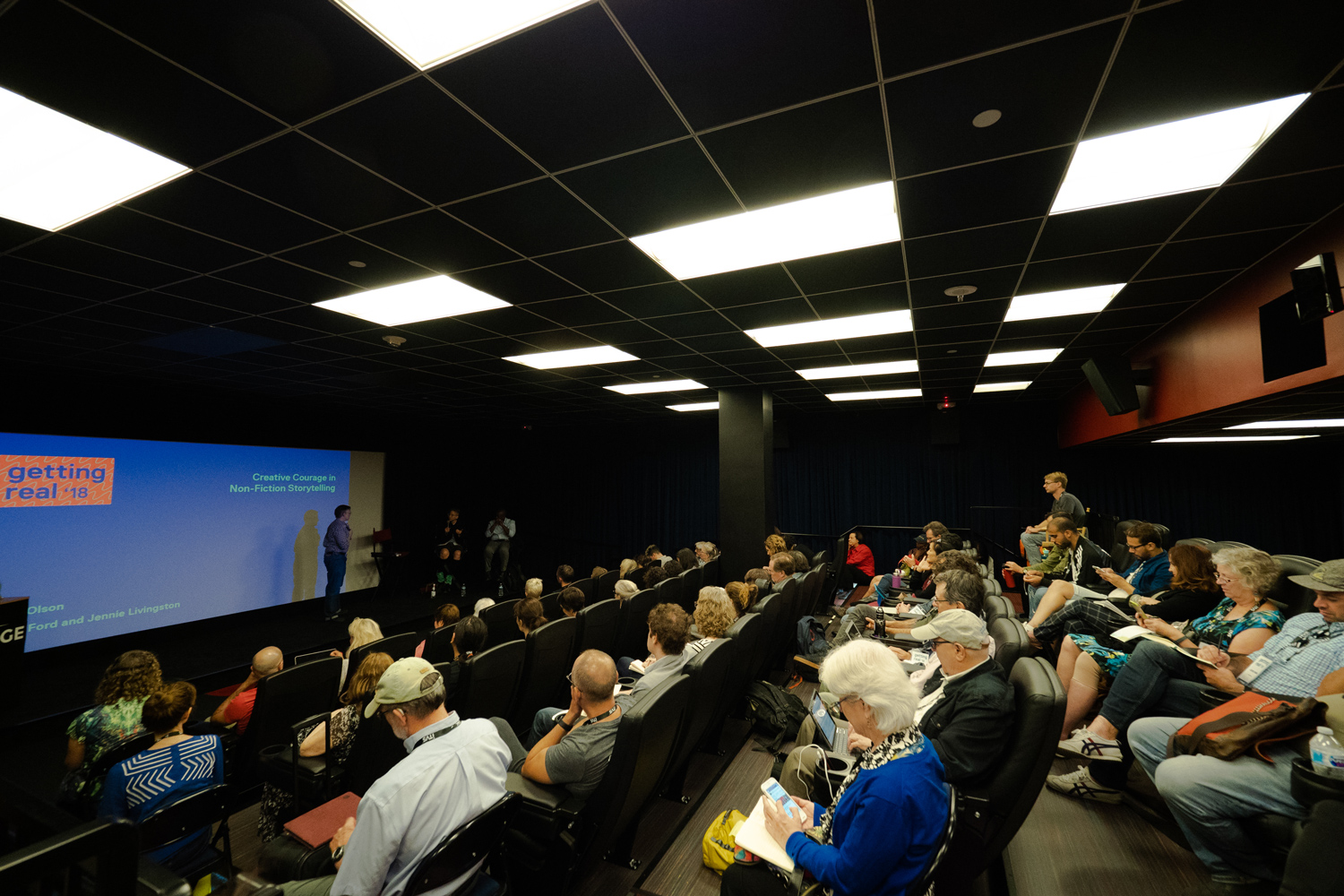 Strong Island is also about the loss of a brother and about life and death in Ford's family as well as the failure of justice and betrayal of the American promise. "The film is about my brother's murder and its impact on my family and the question of reasonable fear and who gets to decide what fear is reasonable," Ford explained. The film, he said, reveals "the interior lives of my family, and how my brother's death and the lack of due process" affected them. "The person who shot and killed him never went to trial," Ford noted. An all-white grand jury accepted the suspect's explanation of self-defense, and the case was dropped.

In response to a question about the influence of poetry on all three filmmakers, Ford said that his film is "less poetic and more novelistic," with characters that were "wholly realized on screen" speaking for themselves. "America is profoundly uncomfortable with ordinary extraordinary people," he continued. "We embraced what it meant for this film to ride on the backs of these people who don't ever get to be presented as the primary storytellers, and certainly were never thought to be masterful at language. That's where the poetry comes from in the film. I got out of their way and let them speak [with] so much eloquence and emotion and description and memory and conflict in what they have to say."

The visual elements, including Ford's own extreme close-up, interviews staged in direct address and intimate presentation of family photos, along with the deeply layered audio, create a cinematic world that is complex and compelling.

Olson told Ford that she appreciated "the space that you open up for the audience, for the viewer to have feelings." He replied, "We wanted to create visual space…to hold shots, static shots of a certain length, saturated colors of the house—blue room, pink room, all these different tableaux. We wanted the interior space to feel expansive."

Ford described the house in the film as a character. "There’s no b-roll in Strong Island," he said. "I don’t believe in coverage shots…We shot a visual library of the place where I grew up, as well as the interior of the house."

He said he realized that the way to make a claustrophobic story feel larger and to "maintain emotional resonance was to get really close and then to stay really close and put the layer of mind-blowing dialogue underneath it." Over the course of the 10-year production, Ford and his crew created a sound library as rich as the visual library: "We recorded sound in all of our locations, scored live to picture, and used three mics in all the interviews."

When an audience member asked each of the filmmakers to reveal their biggest risk, Ford said he didn't want to be on camera but did it because it was necessary. That elicited a gasp from the audience because his on-camera presence, a centerpiece of the film, is so effective. "We had been shooting for four years before we shot a single interview with me," Ford reflected. "I tried to be as alone in the room as I possibly could because I could not bear to say things I hadn't said before and be vulnerable with anybody witnessing that." To achieve that solitude, Ford put up a wall of sound blankets so he "didn't see people who were interviewing, didn't see the cameraman, didn't see the soundperson, didn't see the PA."

Ford's recording shares a place in documentary history. In Chronicle of a Summer, Jean Rouch and Edgar Morin collaborated with their subject, Marceline, a concentration camp survivor who could not speak about her experience in an interview. Together, they found a way to give her the privacy she needed, filming her walking toward a retreating camera and talking to herself.

Strong Island was nominated for the Best Documentary Feature Academy Award, and Ford is the first openly transgender director to be nominated for an Oscar. The film won a National Emmy for Exceptional Merit in Documentary Filmmaking and a Special Jury Award for Storytelling at Sundance, where it was acquired by Netflix.

The flexibility of his more than a dozen major funders and the distribution by Netflix are compass points for documentary in the new media landscape. Ford went to Sundance expecting a theatrical release, followed by a premiere on POV. But not a single theatrical distributor expressed an interest. When Netflix made an offer, he said his funders "deferred to the process that was unfolding…Public broadcasters were willing to give up their exclusivity for the sake of it being able to be on a platform that would reach more people." As Olson noted, Netflix saw Strong Island as "a film that everyone should see"; the theatrical distributors didn’t get it.

Livingston said that her experience with Paris Is Burning nearly 30 years ago was similar. She said that despite winning the Jury Prize at Sundance, the film got zero response from distributors, who didn’t understand the potential for the audience. At first, the film was a victim of homophobia, but in the end, she asserted, Paris Is Burning proved that "audiences are way more imaginative." After a sold-out two-week run at Film Forum, the film went on to be an enormous success.

The Royal Road includes a scene of Tony Kushner quoting Bertolt Brecht's famous plea to support "bad new things" and not rely on "good old ones." It takes courage to break Ricky Leacock's rules: "no narration...no questions...never ask anyone to do anything...screw the tripod."

But, as Ford argued, "There is a trajectory for these films," citing Tongues Untied and Paris is Burning. These films are embedded in the history of documentary, from Vertov and Vigo to Varda. They are the good new things.

Larry Kirkman is a producer and writer and former film professor and dean of the School of Communication at American University.  Learn more about his current work and career at larrykirkman.com.